Salisbury steak is one of those dishes that is quintessentially American but seems to make an appearance in frozen dinners more than on kitchen tables. But you don’t need to pull out a pre-made meal full of nasties when you can make Salisbury steak right at home. Plus, not only is this Salisbury steak recipe simple to make, it’s finished in the slow cooker for a hands-off dinner that’s cooked to perfection.

What Is Salisbury Steak?

What makes Salisbury steak so special? It’s a dish that sometimes causes confusion. Is it hamburger? Or a fancier meatloaf? Well, it’s a little bit of both.

Salisbury steak is made from ground beef that’s mixed with breadcrumbs as well as seasonings like ketchup and Worcestershire sauce and then fried up. The patties are then smothered in a delicious brown gravy made with mushrooms and onions to finish it all off. Yum!

The dish has an interesting history. It’s named after a U.S. doctor, James H. Salisbury, from the 1800s who believed that food could cure diseases. So far so good, right? The steak — or “muscle pulp of beef,” as he called it — was one of his favorite dishes. That’s because he thought that foods like fruits, veggies and starches were bad for the body. (1) Needless to say, we don’t agree with everything Salisbury thought up.

Salisbury did several experiments where he ate just one food, like porridge, at a time before concluding that Salisbury steak was the best food for the body. It was one of the main points of the book he published, where he advocated for a low-carb diet for weight loss. (2) Salisbury is credited as being one of the first to introduce a fad diet to the United States.

But whatever his ideas, there’s no denying that Salisbury created a seriously tasty recipe.

You might be wondering if Salisbury steak is healthy. The answer is that you can definitely make a healthy version. One serving of this slow cooker steak provides:

This slow cooker Salisbury steak recipe benefits from using grass-fed beef instead of plain hamburger. Grass-fed beef is naturally higher in vitamins, minerals and antioxidants than grain-fed beef. It may actually help reduce heart disease and balance blood sugar levels. (3, 4) It can be a bit more expensive, but you truly get more bang for your buck. We keep this homemade Salisbury steak recipe easy on the stomach, too. Instead of breadcrumbs, we’ll use gluten-free cracker crumbs. This helps bind the beef with the egg and tomato sauce or ketchup to ensure that even after cooking, the steak remains juicy and flavorful.

And let’s not forget about the brown gravy recipe! Made with beef broth, mushrooms, onions, fresh thyme and Dijon mustard, you’ll want to lick the spoon as you prepare it. You can use pre-made broth for this, but if you want to kick things up a notch, using homemade beef bone broth can provide extra nutritional benefits — it’s one of my favorite foods for helping to improve leaky gut.

How to Make Salisbury Steak

But enough about the ingredients. Let’s get cooking! 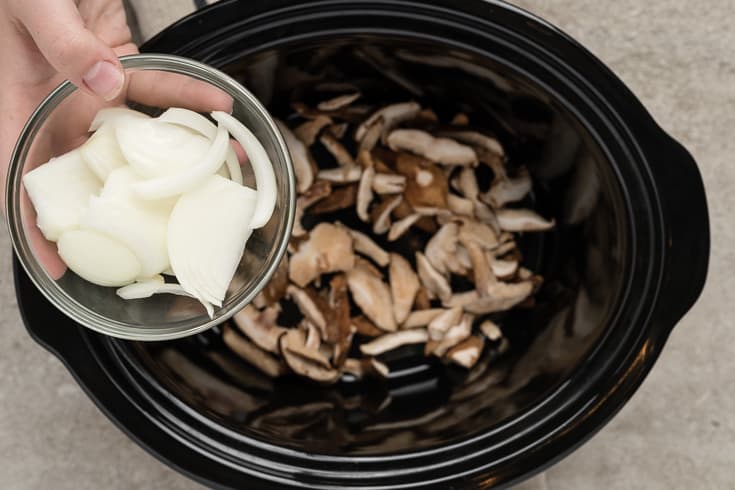 To start, place the mushrooms, garlic, onions, herbs, salt and pepper at the bottom of the slow cooker. Next, in a bowl, mix together the ground beef, Worcestershire sauce, crushed crackers, ketchup, eggs, salt and pepper. Use your hands to form them into 2- to 3-inch patties. This should make about six to seven patties. Brown the patties in a skillet to give them a nice color. Then place the patties on top of the mushroom mixture in the slow cooker. Pour the broth mixture over the patties in the slow cooker. Serve the patties on a plate and spoon the brown gravy over them. These Salisbury steaks go nicely with mashed potatoes to soak up the sauce as well as green beans. Much better than a frozen dinner!