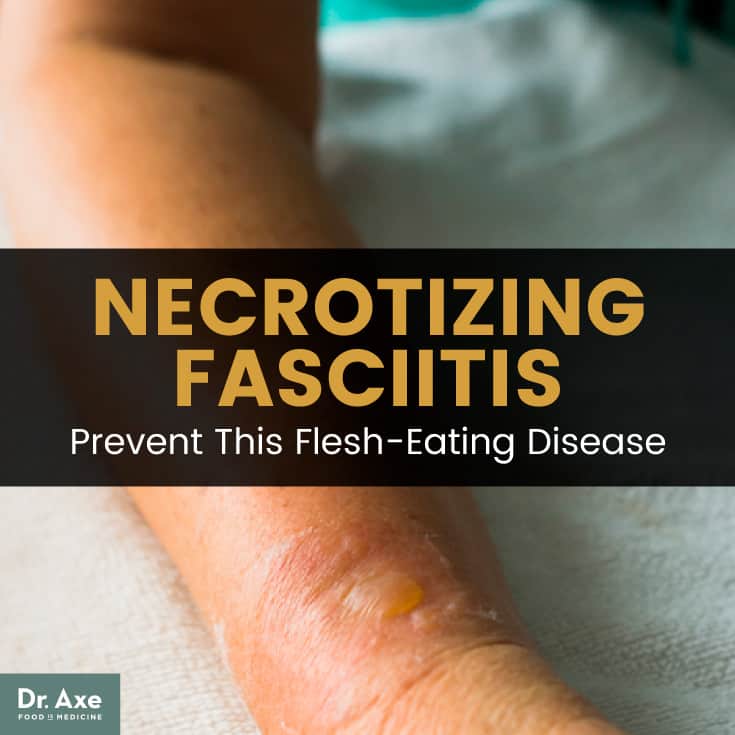 A rare disease is getting attention, particularly due to the recent flooding in Texas and Louisiana. Necrotizing fasciitis, also known as flesh-eating disease, only affects about 1 in 250,000 people. This means that the average person has a .000004 percent chance of ever contracting this infection. (1)

What does that have to do with flooding? Major news outlets covered a woman who died as a result of flesh-eating bacteria. While wading through the floodwaters of her son’s home, 77-year-old Nancy Reed of Kingwood, Texas, exposed a wound on her body to floodwaters highly contaminated with E. coli and coliform bacteria, the latter of which is an organism present in fecal matter and that signals additional pathogens are probably in the water.

Each year, about 1,000 cases are reported annually, but the Centers for Disease Control and Prevention (CDC) considers that statistic to be very low, since they don’t track some of the cases of necrotizing fasciitis that occur from particular bacteria. (2)

Although you’re unlikely to ever experience this condition, there are risk factors I’ll explain below that increase your susceptibility to getting this flesh-destroying infection. Diagnosing necrotizing fasciitis can be a challenge for practitioners, but it is always a medical emergency requiring immediate attention and treatment. (3)

What Is Necrotizing Fasciitis?

The CDC defines necrotizing fasciitis as a “serious bacterial skin infection that spreads quickly and kills the body’s soft tissue.” (4) Generally, after a wound has been opened, various bacteria may enter the cut and create toxins within the tissue they infect, which causes that tissue to die. “Fasciitis” refers to the tissue necrotizing fasciitis infects: the connective tissue around muscles, nerves, fat and blood vessels is known as the “fascia.”

Necrotizing fasciitis is not generally contagious, but rather contracted from bacteria that comes from various sources. Some people errantly call it a flesh-eating virus, but this is incorrect, as bacterial and viral infections are vastly different in how they work within the body.

This incredibly serious condition needs to be treated as quickly as possible and is usually dealt with by a combination of antibiotics and surgical intervention to remove infected tissue. The mortality rate of necrotizing fasciitis is generally between 15–25 percent, which is a very high percentage of patients. Many of those who survive require amputation of extremities, where most cases occur on the body.

There are eight bacteria known to cause necrotizing fasciitis:

Conditions often confused with necrotizing fasciitis include cellulitis or MRSA. One major treatment factor has to do with early diagnosis — the faster a physician recognizes you have it, the more chance you have of surviving with minimal effects. 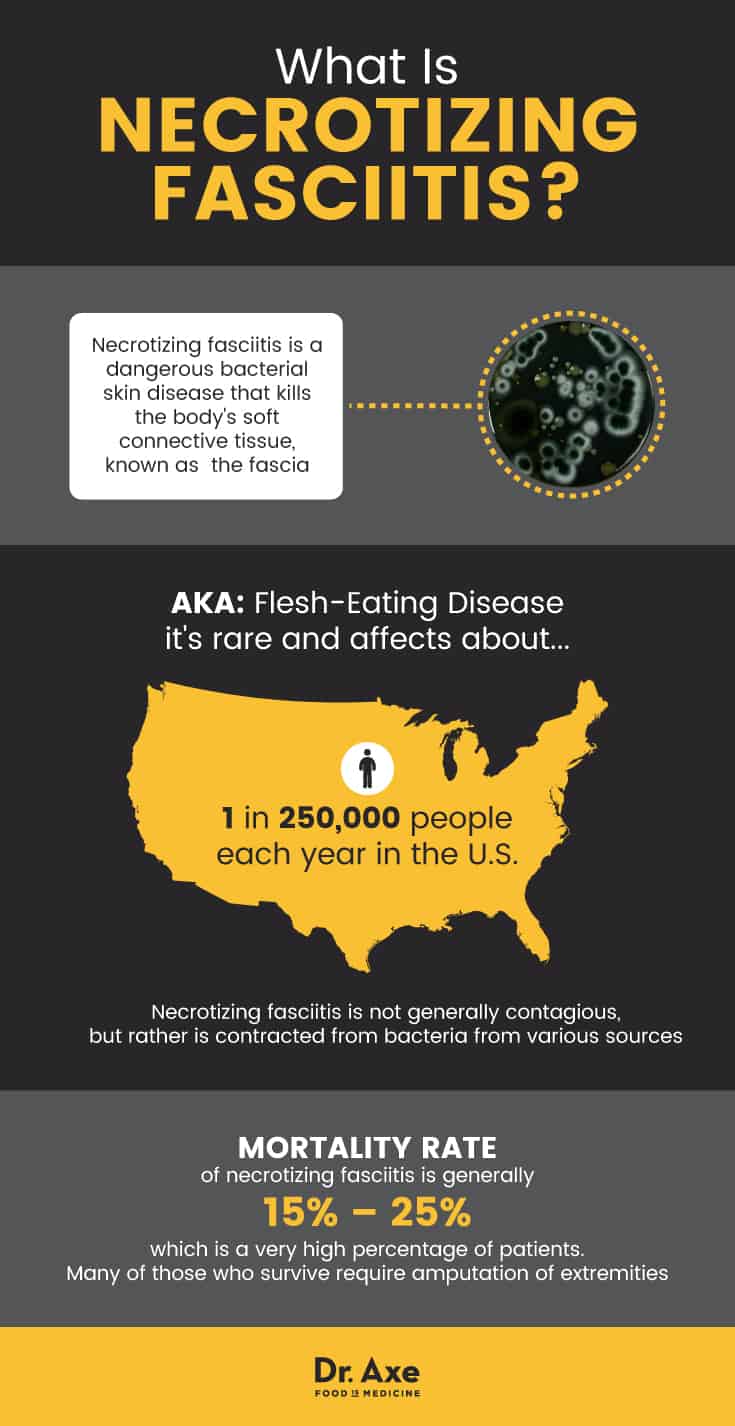 Certain risk factors for necrotizing fasciitis greatly increase a person’s chance of either contracting the infection or dying as a result of it. These sometimes change based on various reviews but generally include: (7, 8, 9, 10, 11)

In lab tests, some doctors noted that many patients diagnosed with necrotizing fasciitis tested positive for anemia, high serum creatinine and hypoalbuminemia (low albumin, a protein created by the liver) and had an elevated pulse and low systolic blood pressure.

Most cases of necrotizing fasciitis stem from an infected wound, but it’s possible to contract the infection without an open wound. This is usually seen in patients with cirrhosis or those who have suffered blunt trauma that does not break the skin, such as that in a car accident. (12)

One tricky thing about necrotizing fasciitis is the way it may seem like just any other injury or illness. Soreness will generally spread (some describe it as the feeling of a pulled muscle around the injury site) and is followed by flu-like symptoms.

Signs to look for include:

Soreness around a wound: This will generally be far more painful than the severity of the wound would usually induce.

Red or purple swelling: If you experience this symptom, it’s likely to spread quickly. Some people suggest making a mark at the edge of the swelling and then looking at it an hour later. If the swelling has extended a quarter inch or more, get to the hospital right away. Swelling, also known as erythema, is extremely common, especially accompanied by flu symptoms.

Ulcers: Not all people experience this, but some sufferers of flesh-eating bacteria get ulcers, black spots or blisters on their skin.

Tenderness: Tender skin around the affected area, especially if it seems out of proportion to the wound, might also signal a serious problem.

Flu-like symptoms: Fever, chills, fatigue and vomiting are all common and usually pop up within a few hours of infection.

Skin necrosis: The death of patches of skin is a late sign of necrotizing fasciitis.

Fluctuance: This odd symptom is seen in end-stage necrotizing fasciitis. Fluctuance is a “wave-like feeling” that occurs when an infected wound is touched.

Sensory and motor deficits: Another final symptom usually experienced by patients already under hospitalization, sensory and motor problems may occur as the infection spreads.

Depending on the infection source, different risk factors may be more prevalent. For example, researchers reviewing cases suggest to doctors that liver dysfunction and necrotizing fasciitis is often indicative of an A. hydrophila infection, while diabetic patients are more likely to experience infection via K. pneumoniae. (13)

Death occurs in many cases as a result of several things at once, including septic shock, disseminated intravascular coagulation (the consumption of clotting proteins in your blood that can lead to lack of blood flow or serious bleeding) and multiple organ failure.

The longer a patient is hospitalized to be treated for necrotizing fasciitis, the higher their chance of death; this is why early diagnosis is key to treating these infections. (14) Necrotizing fasciitis is a medical emergency. There are no home remedies safe to try when you begin experiencing these symptoms. All treatment should take place as fast as possible under the care of a doctor. This condition always requires hospitalization.

However, there are ways to help prevent contracting flesh-eating bacterial infections, which I will explain below, as well as the typical treatment plan for people with this diagnosis.

The number one way to prevent necrotizing fasciitis is to promptly use first aid on all wounds and keep them clean as much as possible. Other preventive measures that may be taken are:

Unfortunately, these options aren’t always available, so it’s imperative to see a doctor if you start experiencing the symptoms above, especially if you have risk factors for this condition or cut yourself while underwater.

Diagnosing necrotizing fasciitis can be a challenge because doctors can’t always tell it apart immediately from other flesh infections. This is further complicated by the fact that the condition is so rare that the average physician will see only one case throughout their entire career.

However, there are various diagnostic tools doctors may use to decide if necrotizing fasciitis fits your symptoms, such as MRI, X-ray, computerized tomography and visual assessment of the affected area. (19)

When a doctor has determined you have, or probably have, a flesh-eating bacteria, their first line of defense will be strong IV antibiotics.

The mortality rate for this disease is high due partly to the fact that the bacterial strains do not respond to antibiotics in the same way — some are more susceptible to particular antibiotics, while others may be resistant to the same treatment. Lab tests will probably be used to determine the source of the infection.

Depending on the extent of the necrosis (death) of the skin, antibiotics alone might not work because the offending toxins can reduce blood flow. Therefore, doctors frequently perform surgery to remove the dead tissue. This part of the process is considered critical and usually takes place as soon as possible after diagnosis and an antibiotic regimen.

This surgery, referred to as “debridement” in medical literature, may be done multiple times if the infection continues to spread. Subsequent debridements may indicate the need for limb amputation. (20)

It is challenging to develop new treatment methods for conditions like this because using a placebo group risks unnecessary death and is considered highly unethical. However, there are some complementary therapies currently under investigation for their efficacy.

Dr. John Crew, director of the Advanced Wound Care Center at Seton Medical Center in Daly City, Calif., was responsible for developing a treatment protocol to treat flesh-eating bacteria without as pronounced a risk for amputation and death. Maintaining the antibiotic regimen already common in the treatment of necrotizing fasciitis, Dr. Crew began using negative pressure wound therapy and NeutroPhase (a pure hypochlorous acid solution) on patients with the condition. (21)

Receiving patient referrals (until his unfortunate death in February 2017) from the National Necrotizing Fasciitis Foundation (NNFF), Crew would walk patients and practitioners through the process of using his protocols and, according to the NNFF, of the over 100 patients treated using his protocols, none died or lost a limb. Their website lists many survivor stories that occurred between 1997–2017.

Two other therapies have been utilized in recent years. One, hyperbaric oxygen therapy, involves breathing 100 percent oxygen in a whole-body chamber. (22)

The results are somewhat tentative. And opponents of this therapy claim that this is an unreasonable option because hyperbaric chambers are not available at all institutions. Plus, it’s difficult and potentially dangerous to transport a patient back and forth three times a day who’s suffering from such a disease. However, there is some evidence they can improve wound healing in necrotizing fasciitis patients. (23, 24)

While it’s possible to limit your risk of developing necrotizing fasciitis by using antibacterial methods of wound cleaning and properly caring for open wounds, remember that this is a medical emergency and needs immediate attention.

You should never attempt to treat a wound displaying symptoms of necrotizing fasciitis at home, such as rapidly expanding redness and swelling. This is especially true if you begin to experience flu-like symptoms or notice your wound is worsening without obvious reasons.

There are various sources online associated with natural medicine that will suggest trying home remedies at first, particularly turmeric or pascalite clay. Wild claims that home remedies will “cure” necrotizing fasciitis are not credible.

Remember, not every case is wound-related. Pay attention to your body and seek medical attention as soon as you need it. If you believe you or a loved one may have this condition, get to a hospital and follow your doctor’s advice on treatment methods.

Read Next: Sepsis: 7 Natural Health Tips to Prevent It & Fight It