The color of urine has been a valuable diagnostic tool since the beginning of medicine, as it reveals important information about someone’s health. The elimination of urine is very important for different bodily functions; it regulates the balance of water in the body and gets rid of substances that are produced during metabolic processes and are no longer needed by the body.

The color, odor and amount of urine can indicate whether something is wrong. The ideal healthy urine color is a straw yellow color, and anything darker or lighter — like cloudy urine — may indicate that you have a health issue on your hands, such as a urinary tract infection (UTI).

Cloudy urine can be among common UTI symptoms, and UTIs are among the most common bacterial infections affecting women. Cloudy urine in men and children certainly occurs as well, and there are also many other possible reasons for cloudy urine in addition to UTIs.

To make a self-diagnosis using the color of your urine, you have to be aware of the possible causes of cloudy urine and the best ways to treat or prevent health problems that are associated with cloudy pee.

What Is Cloudy Urine?

Urine is a liquid waste product that’s filtered from the blood by the kidneys, stored in the bladder and expelled from the body during urination. Because urine is a compilation of the waste that has been present in your body, it’s a good indicator of your current health condition.

Normal, healthy urine is clear and has a light yellow, straw-like color to it. When urine becomes murky, foamy or opaque, it is often referred to as cloudy urine. White cloudy urine, cloudy yellow urine, dark cloudy urine are all different variations of abnormal urine that is cloudy.

The answer to the question, “Why is my urine cloudy?” can have several answers so let’s take a look at the possibilities now.

There are a few possible causes of cloudy urine, some more serious than others.

Do you have cloudy urine and no pain present? It may be a sign of dehydration, and when it occurs without symptoms and goes away rapidly, there are usually few consequences. In order to avoid a health scare, be sure to drink plenty of fluids throughout the day.

What if you experience cloudy urine but don’t have a UTI? Kidney stones, which affect up to five percent of the population, or a kidney infection may also cause cloudy urine because they can cause pus in the urine, which gives it a milky or cloudy appearance.

Kidney stone symptoms can be extremely painful and similar to the symptoms of a bladder infection. Because a kidney stone sometimes has jagged edges, it can tear against the ureter as the body tries to pass it. The tearing can cause an infection, which causes pus to be produced, thereby causing the urine to appear cloudy.

Some diseases, such as diabetes, preeclampsia and heart disease, affect other body systems in addition to the urinary tract and may cause your pee to appear cloudy.

STDs that can cause urine to become cloudy include gonorrhea and chlamydia. Cloudy urine may be a symptom of gonorrhea, a sexually transmitted disease (STD) that can infect both men and women. Gonorrhea causes infections in the genitals and rectum, which causes increased discharge from the penis and vagina. The discharge mixed with urine may make urine appear cloudy. Chlamydia, another very serious STD that may go undetected, can also cause cloudy urine.

According to Mount Sinai Medical Center, “Late stages of prostate cancer or prostate enlargement can manifest cloudy urine brought on by blood or sediment that has accumulated in an obstructed bladder.”

Paying attention to signs and symptoms that exist in conjunction with cloudy urine can help you make a diagnosis. For instance, if you experience pain along with the murky urine, you may have a urinary tract infection or kidney stones. Both UTIs and kidney stones can cause cloudy urine and back pain.

Pain from a urinary tract infection is typically present while you urinate, and you may have foul smelling urine as well. Passing a kidney stone can be painful whether you’re urinating or not. Kidney stone pain can be agonizing until you pass the stone or stones.

Cloudy urine doesn’t always mean that you have a serious health condition or infection. If you notice your urine is cloudy for several days in a row, you may want to see your health care provider. When you first notice that your urine is cloudy, think about the medications that you take, what you’ve eaten that day, if you’ve had sex recently (as discharge mixed with pee can make it appear cloudy) and how you feel.

A urinalysis is a test of a urine sample that will reveal any problems of the urinary tract and other body systems. It assesses the color, clarity and concentration of urine, as well as the chemical composition. A urinalysis will also detect the existence of bacteria in the urinary tract.

Symptoms of a Bladder Infection

The symptoms of uncomplicated cystitis include frequently having to go to the bathroom and a stinging or burning feeling when urinating. Many women with bladder infections find that it’s particularly painful when their bladders are almost or completely empty. Some other common symptoms of a bladder infection include:

Cloudy urine is commonly caused by an infection, which may be treated with antibiotics. However, continued use of antibiotics has caused the development of antibiotic resistance, which has become a serious health concern. Certain home remedies for UTIs, which can lead to cloudy, smelly urine, help to boost your immune system and flush out harmful bacteria.

If you’re wondering, how do I get rid of cloudy urine? Some natural treatments to clear up clouding of the urine and prevent a UTI include probiotics, cranberry, acupuncture and more. Let’s take a look at these natural cloudy urine treatment options now!

L-arginine is a type of amino acid that helps with detoxification and fights inflammation. It also has antibacterial and immune-modulating properties.

L-arginine can play an important role in treating an overreactive bladder because it helps regulate and regenerate bladder cells. When L-arginine is converted into nitric oxide, it can also inhibit the growth of different microorganisms that may cause UTIs and symptoms like cloudy urine.

A UTI is caused by bacteria that colonize in the urinary tract. Probiotics are used to help repopulate the normal flora of the GI tract. They aid the gastrointestinal tract or vagina to resist invasion and adhesion of pathogens like E. coli, enhance the immune system, increase the population of good bacteria, and regulate the intestinal flora.

Quercetin is a type of flavonoid antioxidant that plays a key role in fighting inflammation. While you can get plenty of quercetin from eating a healthy diet with foods, such as leafy greens, berries and broccoli, some people also take quercetin supplements for their strong anti-inflammatory effects.

Quercetin can help regulate inflammation in the bladder, and it lowers pain associated with infections. Research shows that people experiencing bladder pains from infections, which cause cloudy urine, an urgent need to urinate, inflammation and burning, have fewer symptoms when taking quercetin supplements.

Derived from the petroselinum plant, parsley has been used as a natural detox remedy and anti-inflammatory agent. Parsley extract has shown to possess diuretic effects in addition to anti-inflammatory properties, which are essential in the treatment of UTIs.

Garlic is well-known for its antibacterial, antifungal and antiviral properties, which are attributed to the presence of allicin. Garlic also exhibits anti-inflammatory, antioxidant and immune-boosting effects that aid in the treatment of urinary tract infections that can cause cloudy urine. Research suggests that the combination of garlic oil and parsley in pill form can inhibit bacterial growth and reproduction.

Some research suggests that cranberry consumption demonstrates a decrease in UTI recurrence over a period of six months. A 2014 study published in Clinical Infectious Diseases found that cranberry prophylaxis was effective in improving quality of life in patients with a urinary tract infection, and it was more cost-effective than antibiotics. 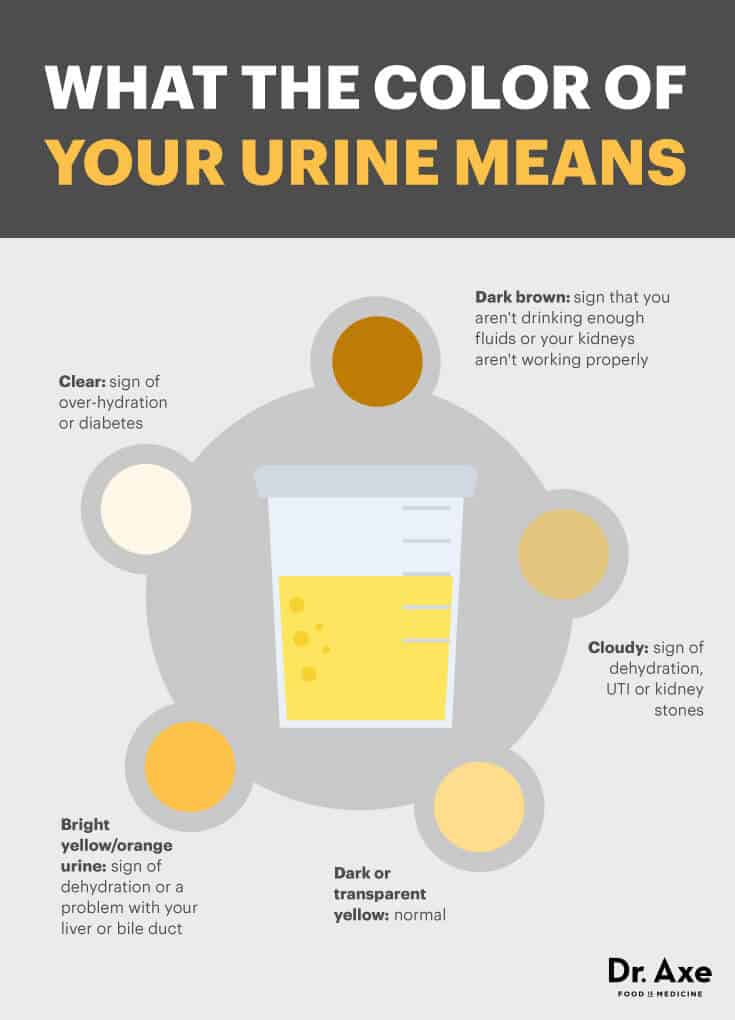 A study published in the British Journal of Urology found that after patients filled out three-day food and voiding diaries, they revealed that the intake of certain foods and fluids exacerbated UTI symptoms and increased painful bladder symptoms within two to four hours of consumption.

The symptoms were reduced with the elimination of these common problematic foods: alcoholic beverages, carbonated drinks, caffeine, spicy foods, tomatoes, citrus fruits and vinegar. Arylalkylamine-containing foods, such as bananas, beer, cheese, mayonnaise, nuts, onions, raisins, sour cream, wine and yogurt, have also shown to increase symptoms of a possible bladder infection. So it’s a good idea to avoid these foods that cause cloudy urine and other unwanted symptoms.

According to research published in the European Journal of Clinical Nutrition, bacterial destruction from the urinary tract is partially dependent on urine flow and voiding frequency. Studies show that chronic low fluid intake may play a crucial role in the pathologies of urinary tract infections and other diseases of the urinary system (like bladder cancer and kidney disease).

Adequate hydration is important and may improve the results of antimicrobial therapy for UTIs. Also, it’s important to urinate frequently to help flush bacteria from the bladder. Holding urine for a long time allows bacteria to multiply within the urinary tract, resulting in UTIs like cystitis.

A 2002 study published in the American Public Health Association indicated that acupuncture reduced the cystitis recurrence rate among cystitis-prone women to half the rate among untreated women. Also, women in the acupuncture group exhibited reductions in residual urine, which is a risk factor in the pathogenesis of recurrent lower UTIs among postmenopausal women and maybe even among adult women in general.

Research published in the Sultan Qaboos University Medical Journal shows that preventive measures related to sexual intercourse may reduce the UTI recurrence rate. Women are encouraged to clean the genital areas before and after sex and to wipe from front to back, which helps reduce the spread of E. coli from the perigenital area to the urethra.

Avoiding multiple sexual partners reduces the risk of both UTIs and sexually transmitted infections. Women are also encouraged to avoid spermicidal contraceptives, diaphragms and vaginal douching, which may irritate the vagina and urethra and encourage the entry and colonization of bacteria within the urinary tract.

A study conducted at the University of Michigan School of Public Health found that it’s best to avoid skin allergens on or around the genital area, such as bubble bath liquids, bath oils, vaginal creams and lotions, deodorant sprays or soaps. Many of these contain toxic synthetic scents. These products can alter vaginal flora and ultimately result in UTIs and symptoms like cloudy urine.

Although cloudy or murky urine does not always mean you have a serious health problem, if you notice that the cloudy or murky color lasts for several days, even after you’ve tried some home remedies to reverse the issue, it’s a good idea to reach out to your healthcare provider.

Some medical conditions that cause clouding of the urine, like sexually transmitted diseases or kidney problems, shouldn’t be ignored, and they typically won’t go away on their own. Only a proper urinalysis that’s taken at a medical lab or doctor’s office can accurately diagnose potential medical conditions.