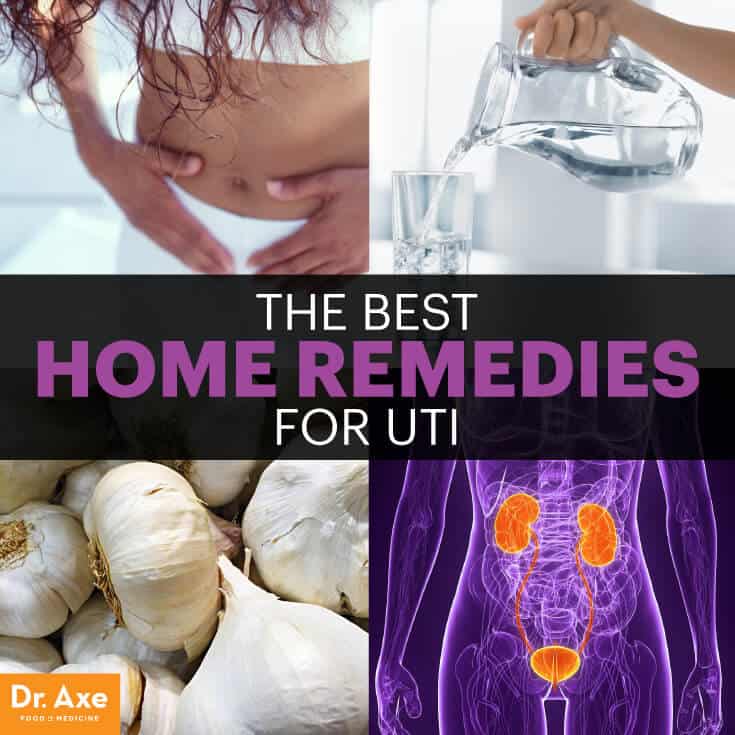 Urinary tract infections are some of the most frequent clinical bacterial infections in women, accounting for nearly 25 percent of all infections. More than 50 percent of women will develop a UTI and UTI symptoms in their lifetimes, and because antibiotics are the most common conventional treatment for UTIs, bacteria have become antibiotic-resistant and recurring infections are a major concern. (1) For this reason, it’s important to use home remedies for UTIs that eliminate bacteria completely and reduce the risk of developing recurrent urinary tract infections.

Drinking water or fluids throughout the day helps flush bacteria from your system. A 2013 study conducted at the University of Texas Southwestern Medical Center at Dallas found that chronic low fluid intake may be an important factor in the pathogenesis of urinary tract infections — just one of many reasons to stay hydrated. (1) Drink at least one glass of water for every meal and snack of the day in order to flush out bacteria that can lead to infection.

Urinating often and when the urge arises ensures that bacteria isn’t growing in urine that stays in the bladder. It’s also important to urinate soon after sexual intercourse in order to flush out bacteria that may have entered the urethra. Studies have found that holding urine for a long time allows bacterial to multiply within the urinary tract, resulting in a urinary tract infection. (2)

Women should wipe from front to back, especially after a bowel movement. This ensures that bacteria doesn’t get into the urethra. It’s also important to wear loose-fitting clothes and underwear, which allows air to keep the urethra dry. Wearing tight jeans or material like nylon can be problematic because moisture can be trapped, allowing bacteria to grow.

Spermicides can increase irritation and allow bacteria to grow. Using unlubricated condoms can also cause irritation, so choose lubricated condoms that don’t contain spermicides. A 1996 prospective study published in the New England Journal of Medicine indicates that among sexually active young women, the incidence of UTI is high and the risk is strongly and independently associated with recent sexual intercourse, along with recent use of a diaphragm with spermicide. (3)

Because of the development of bacterial resistance, one of the most promising home remedies for UTI, especially recurring UTIs, is probiotics. Research published in the Indian Journal of Urology explains that benign bacterial flora is crucial for preventing the overgrowth of microorganisms that lead to illness. The use of antibiotics destroys beneficial bacterial flora, and pathogenic bacteria are selectively enabled to overgrow on internal and external surfaces.

Some studies suggest that cranberry juice may decrease the number of UTIs a person develops over a 12-month period, particularly for women with recurrent UTIs. (5) Although there’s limited or mixed evidence concerning cranberry’s ability to manage UTI symptoms, there is evidence that cranberries can be used as a preventive strategy. Animal studies show that cranberry products appear to work by inhibiting the growth and colonization of bacteria that cause infection, including E. coli, the most common bacteria seen in urinary tract infections. (6)

Allicin, one of the active principles of freshly crushed raw garlic, has a variety of antimicrobial activities. In its pure form, allicin has been found to exhibit antibacterial activity against a wide range of bacteria, including multi-drug-resistant strains of E. coli. Garlic also has antifungal properties, particularly against candida albicans, which causes yeast infections. (7)

D-mannose is a kind of sugar that’s related to glucose. It’s on this list of home remedies for UTI because it can prevent certain bacteria from sticking to the walls of the urinary tract.

Vitamin C makes urine more acidic, inhibits the growth of E. coli and enhances immune function. A 2007 study evaluated the role that daily intake of 100 milligrams of vitamin C plays in urinary infection treatment during pregnancy. Researchers found that vitamin C treatment for a three-month period was able to reduce urinary infections, improving the health level of the gestating women. (9)

Research published in Phytotherapy Research indicates that clove oil has antimicrobial, antifungal and antiviral activity. Another clove oil benefit is that it possesses anti-inflammatory properties, and it’s used to relieve pain and promote healing. (10) Clove can be taken internally for two weeks at a time, but I recommend that you do it under the care of a health care provider or nutritionist.

Several human and animal studies show that myrrh oil has antibacterial, antifungal and antiparasitic properties. Historically, it’s been used to treat wounds and prevent infections. (11) It can be applied topically with a warm or cool compress, or rubbed into the skin. Use caution when using myrrh internally; make sure to use a pure, high-quality product and do it under the care of your health care provider.

A 2012 study evaluated the antibacterial activity of oregano oil. Researchers found that oregano was active against all of the clinical strains of bacteria that were tested, and it successfully inhibited the growth of E. coli, the bacteria most commonly seen in UTIs.

Researchers believe that oregano essential oil can be used as an alternative antibacterial remedy for enhancing the healing process in bacterial infections and it’s an effective means for the prevention of antibiotic-resistant strain development. In fact, oregano oil benefits may be superior to prescription antibiotics because oregano doesn’t cause antibiotic resistance and it has no harmful side effects. (12)

A UTI, or urinary tract infection, is caused by organisms that are too small to be seen without a microscope, including fungi, viruses and bacteria. Despite the body’s many natural defenses, certain bacteria have the ability to attach themselves to the lining of the urinary tract and inhabit the urethra, bladder and kidneys. The majority of UTI cases are caused by E. coli bacterium that can live in the bowel and vaginal cavities, around the urethral opening, and in the urinary tract. (13)

Urinary tract infections are extremely common, especially among sexually active women ages 18 to 24. Although a UTI isn’t typically complicated or life-threatening, it does cause pain and suffering and negatively impacts one’s quality of life.

Generally, symptoms of a UTI in adults may include:

Typically a UTI is uncomplicated and clears up within two to three days of treatment. More serious causes that are sometimes seen in the elderly, people with suppressed immune systems or pregnant women require antibiotics and won’t be cured for seven to 14 days.

There are several risk factors that increase the likelihood of developing urinary tract infections. These risk factors and high-risk groups include:

A major challenge of UTIs is that they tend to reoccur. Recurrent UTIs are mainly caused by reinfection by the same pathogen. With each UTI, the risk that a woman will continue having recurring infections increases. Research suggests that following an initial UTI, one in five women will develop another UTI within six months.

Precautions Regarding UTIs and Home Remedies for UTI

Although these home remedies for UTIs have been studied and proven to be effective, it’s important to use these natural treatments with the guidance of a health care provider. Uncomplicated UTIs should be treated within two to three days. If the symptoms do not subside within that time period, see your health care provider to be sure there aren’t complications.

Read Next: 9 Candida Symptoms & 3 Steps to Treat Them