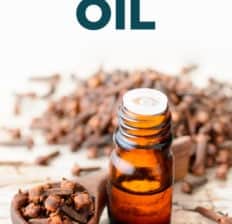 One of the best-known clove oil uses is helping combat dental problems, such as toothaches. Even mainstream toothpaste makers, such as Colgate, agree that this can oil has some impressive abilities when it comes to supporting the help of your teeth, gums and mouth.

It’s been shown to act as a natural anti-inflammatory and pain reducer, in addition to having broad-spectrum antimicrobial/cleaning effects that extend to the skin and beyond.

Indigenous to Indonesia and Madagascar, clove (Eugenia caryophyllata) can be found in nature as the unopened pink flower buds of the tropical evergreen tree.

Picked by hand in late summer and again in winter, the buds are dried until they turn brown. The buds are then left whole, ground into a spice or are steam-distilled to produce concentrated clove essential oil.

Cloves are generally composed of 14 percent to 20 percent essential oil. The main chemical component of the oil is eugenol, which is also responsible for its strong fragrance.

In addition to its common medicinal uses (especially for oral health), eugenol is also commonly included in mouthwashes and perfumes, and it’s also employed in the creation of vanilla extract.

Why is clove used to decrease pain and swelling that comes with a toothache?

Eugenol is the ingredient within clove oil that provides pain relief. It’s the major constituent in the aromatic oil extracted from clove, accounting for between 70 percent and 90 percent of its volatile oil.

How can clove oil kill tooth nerve pain? It works by numbing the nerves in your mouth temporarily, lasting for about two to three hours, although it won’t necessarily solve an underlying issue, such as a cavity.

There’s reason to believe that the Chinese have been applying clove as a homeopathic remedy to ease toothache discomfort for over 2,000 years. While clove used to be ground and applied to the mouth, today clove essential oil is readily available and even more powerful due to its high concentration of eugenol and other compounds.

Clove is widely accepted as a reliable solution for dry socket and relieving the pain and discomfort associated with various dental disorders. The Journal of Dentistry, for instance, published a study demonstrating that clove essential oil had the same numbing effect as benzocaine, a topical agent commonly used before needle insertion.

Additionally, research suggests that clove oil has even more benefits for dental health.

Researches in charge of one study evaluated clove’s ability to slow tooth decalcification, or dental erosion, compared to eugenol, eugenyl-acetate, fluoride and a control group. Not only did clove oil lead the pack by significantly decreasing decalcification, but it was observed that it actually helped remineralize and strengthen teeth.

Here are some other interesting facts about clove/clove essential oil: 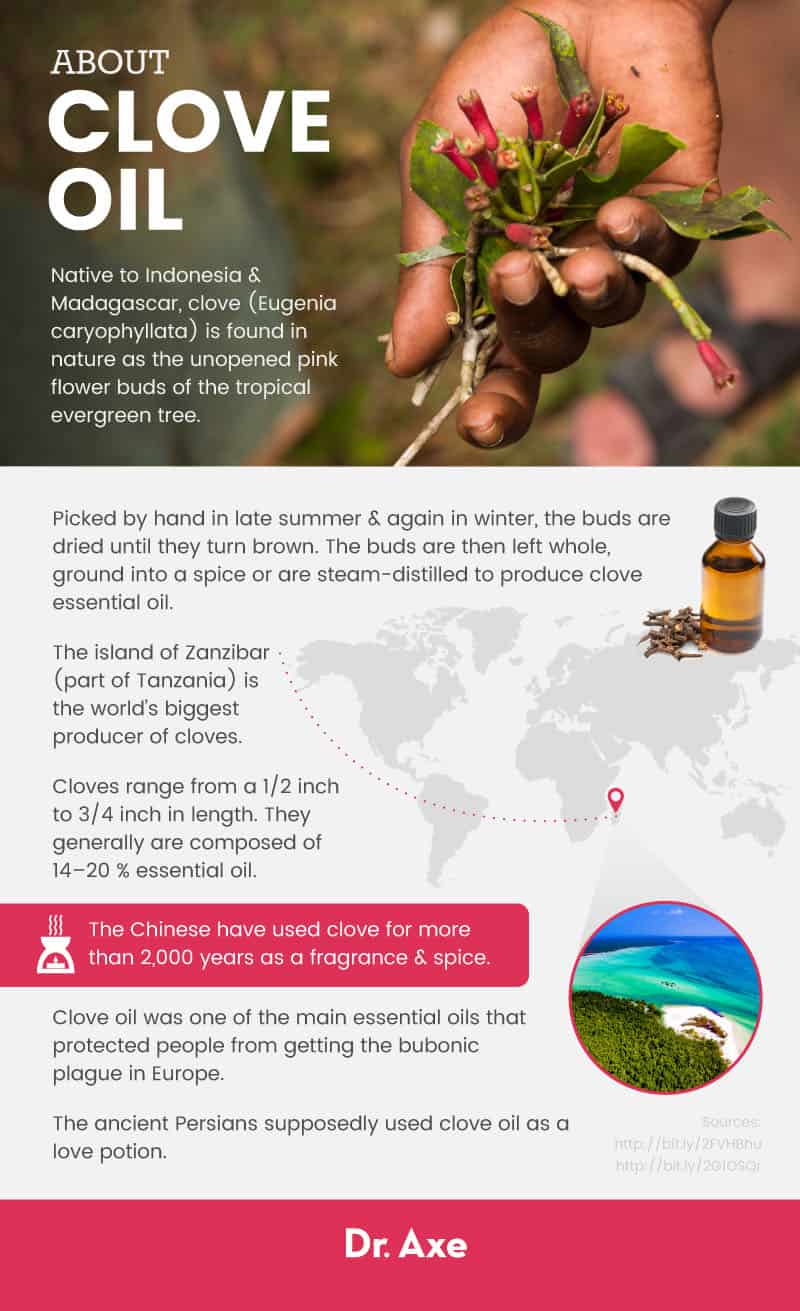 The health benefits of clove oil are vast and include supporting the health of your liver, skin and mouth. Here are some of most common medicinal clove oil uses that are supported by research studies.

Scientific research demonstrates that clove oil has the ability to effectively kill off both the planktonic cells and biofilms of a dangerous bacteria called Staphylococcus aureus (S. aureus). What does this have to do with skin health and, more specifically, acne? S. aureus is one of several strains of bacteria that has been scientifically linked with the pathogenesis of acne.

As a natural remedy to eliminate acne, take three drops clove oil mixed with two teaspoons raw honey. Wash your face with this formula, then rinse and pat dry.

Another powerful effect of clove essential oil is fighting candida, which is an overgrowth of yeast.

Published in the journal Oral Microbiology & Immunology, a study was conducted to see how clove fared against other antifungal treatments. It was observed that clove was as effective as nystatin, a drug commonly prescribed to manage yeast infections of the mouth (thrush), which can have a slew of ugly side effects.

To do a candida or parasite cleanse, you can take clove oil internally for two weeks, however it’s best to do this under supervision of a physician or nutritionist (ideally while also consuming large amounts of probiotic-rich foods and/or taking a probiotic supplements).

Second only to raw sumac bran, ground clove has the astounding ORAC value of 290,283 units. This means that, per gram, clove contains 30 times more antioxidants than blueberries, which have a value of 9,621.

In a nutshell, antioxidants are molecules that reverse the damage caused by free radicals, including cell death and cancer. Research shows that antioxidants slow aging, degeneration, and protect the body against bad bacteria and viruses.

Clove oil uses also extend to treatment of common complaints related to the digestive system, including indigestion, motion sickness, bloating and flatulence (accumulation of gas in the digestive tract).

Research also demonstrates that clove may be able to help when it comes to ulcer formation in the digestive system. One study found that it significantly enhanced gastric mucus production, which protects the lining of the digestive tract and prevents erosion that contributes to gastritis and ulcer formation.

Clove has been shown to naturally combat harmful bacteria that can cause respiratory illnesses and other conditions.

To evaluate its effectiveness as an antibacterial agent, researchers in one study set out to determine which bacteria are most sensitive to clove’s potency. According to their study, clove has the greatest antimicrobial ability over E. coli and also exerted considerable control over Staph aureus, which causes acne, and Pseudomonas aeruginosa, which causes pneumonia.

There’s a good reason why clove oil is included in the Four Thieves Oil Blend. With its potent antibacterial and antiviral abilities, studies suggest it can help boost the immune system to fight off, or even prevent, the common cold and flu.

Eugenol has been shown to have inhibitory effects on oxidative stress and inflammatory responses, thereby helping defend against chronic diseases. Recent evidence even indicates that clove has potential anticancer properties due to its major active component eugenol.

If you’re struggling with high blood pressure, or hypertension, clove may be able to help. Studies conducted mostly on animals have revealed that eugenol seems able to dilate major arteries in the body while also reducing systemic blood pressure.

One study concludes, “Eugenol may be therapeutically useful as an antihypertensive agent.”

Although it has been suspected for centuries to treat inflammatory conditions, the Journal of Immunotoxicology recently published the first study proving that the eugenol in oil of cloves is indeed a powerful anti-inflammatory.

This study demonstrates that low doses of eugenol can protect the liver against disease. It was also observed that eugenol reverses inflammation and cellular oxidation (which speeds the aging process).

In addition, researchers noted that taking large doses internally could harm the digestive lining, and using it externally can irritate sensitive skin. Thus, as with all essential oils, it’s important not to overdo it.

Clove oil (and all essential oils) are extremely concentrated, so remember that a little truly goes a long way.

What is clove oil used for? As you can see, there are many uses for this oil.

Here are some ways to put this oil to use at home:

Due to its strength, clove oil should be mixed with a carrier oil like coconut oil or other gentle oils for most topical applications and only used for short periods of up to two weeks internally.

In terms of where to buy clove oil, look for it in health food stores, online, in some pharmacies and in herbal stores. Always make sure you purchase 100 percent pure, organic and therapeutic-grade clove essential oil, especially if you plan to ingest it.

How does clove oil kill infections? According to dentists and researchers, it works in some of the following ways:

Is clove oil dangerous? While generally safe for most people to use in appropriate amounts, there are some precautions to be aware of.

Using too much can lead to side effects, such as:

Rarely, ingestion of high doses can cause liver damage.

Clove is known to slow down blood clotting due to its eugenol content. It may interact with blood-thinning medications, such as anticoagulant/antiplatelet drugs. To be safe, avoid combining this oil with such drugs.

Dilution of clove oil with a carrier oil like coconut is recommended for topical use. Using the oil undiluted on skin can cause irritation, so avoid directly applying it to skin.

When taking clove oil internally, do not use it for longer than two weeks consecutively. When taking it internally, it’s recommend that you also take a probiotic supplement twice daily to restore beneficial flora.

Clove essential oil is typically not recommended for use with children under the age of 2. Talk to your doctor before using clove oil internally or externally if you are pregnant, nursing or being treated for any ongoing health concerns. Are you looking for an essential oil that will help to boost ...
Read More
Dr. Axe on Facebook 3815 Dr. Axe on Twitter 34 Dr. Axe on Instagram Dr. Axe on Google Plus Dr. Axe on Youtube Dr. Axe on Pintrest 1489 Share on Email Print Article 5.3K

Peppermint oil is one of the most versatile essential oils out there. ...
Read More
Dr. Axe on Facebook 1197 Dr. Axe on Twitter 1 Dr. Axe on Instagram Dr. Axe on Google Plus Dr. Axe on Youtube Dr. Axe on Pintrest 1787 Share on Email Print Article 3K