Pregnancy is a mostly beautiful thing. After all, it quite literally provides the gift of life. Unfortunately, however, pregnancy can come with complications — even fatal ones. One of those complications is preeclampsia (PE), which is the leading cause of maternal-fetus mortality in developed nations. (1)

This condition is believed to affect about 3 percent to 5 percent of all pregnancies, which makes it vital to be aware of the signs of preeclampsia. So, what is preeclampsia, what are the symptoms, and how can you prevent or treat it to ensure a healthy, vibrant pregnancy? Let’s examine those questions and find the answers.

Preeclampsia is a condition in which a woman experiences abnormal development of the placenta, high blood pressure (hypertension) and high levels of protein in the urine (proteinuria) around the last trimester or after the 20-week mark of her pregnancy. Preeclampsia, which was previously known as “toxemia,” can cause organ malfunction, water retention, abdominal pain and certain serious pregnancy complications — which is why pregnant woman are advised to learn the warning signs of PE in order to monitor themselves closely.

PE can be a very serious and dangerous disorder during pregnancy. Along with raising a pregnant woman’s blood pressure, prior to delivery it can cause damage to vital organs, including the liver, brain, kidneys and placenta, and serious malformations in the unborn baby. (2) While most women with PE go on to deliver healthy babies near full term, this isn’t always the case — PE is currently the cause of about 15 percent of premature births in the U.S. (meaning births prior to 37 weeks of pregnancy). (3)

While doctors believe there isn’t a cure for preeclampsia — and researchers still are not 100 percent clear on why it develops in the first place — the earlier a woman recognizes symptoms and seeks help, the better the prognosis will be. In some cases, PE left untreated can lead to premature delivery, intrauterine growth restriction (IUGR), neurological complications in the unknown newborn and, sadly, newborn death, which means prevention and early intervention are the best things a mother-to-be can do.

While there’s no way to fully prevent this disorder from developing or cure it once it’s been diagnosed, there are several things you can do to lower your risk. Research shows that the following natural remedies and lifestyle changes give you the greatest chance of having a healthy pregnancy and delivery free from preeclampsia.

Researchers and doctors both stress that it’s important to get yourself prepared for pregnancy by reaching a healthy body weight, eating a nutrient-dense diet and working on getting into good physical shape prior to conceiving. Staying within a healthy weight range — meaning maintaining a body mass index (BMI) that is within the “normal range” of 19–25, or below 30 — can greatly lower your chance for pregnancy complications. Ongoing obesity and yo-yo dieting can be harmful to hormone levels, your metabolism, and it can worsen inflammation, which are all reasons why it’s associated with an increased PE risk.

The benefits of exercise during pregnancy include reduced inflammation, help reaching and maintaining a healthy weight, and even defense against the effects of stress. Exercising in a moderate, appropriate way is associated with a healthy pregnancy, lower rate of infertility and reduced pregnancy complications.

Doctors recommend you focus on eating plenty of vitamins, minerals and high-antioxidant foods prior to pregnancy to get your body ready to support another life. It’s also a good idea to consume less salt and eat plenty of potassium-rich foods to fight high blood pressure prior to becoming pregnant. Having a history of high blood pressure or other heart problems before pregnancy raises the risks for PE and HELLP syndrome. (4)

Focus on including plenty of fresh fruits and vegetables, which are important superfoods for a healthy pregnancy. Eat a variety of colorful, fresh foods, which supply high amounts of electrolytes, including potassium — leafy greens of all kinds, avocados, sweet potatoes and bananas are great choices.

Cut back or eliminate packaged goods, high-sugar snacks, artificial additives and fried foods. Since PE can cause high protein concentrations in the urine, doctors recommend adjusting your diet prior to becoming pregnant to lower the amount of protein you eat, sticking to a healthy range of about 15 percent to 25 percent of total calories coming from protein foods. (5) 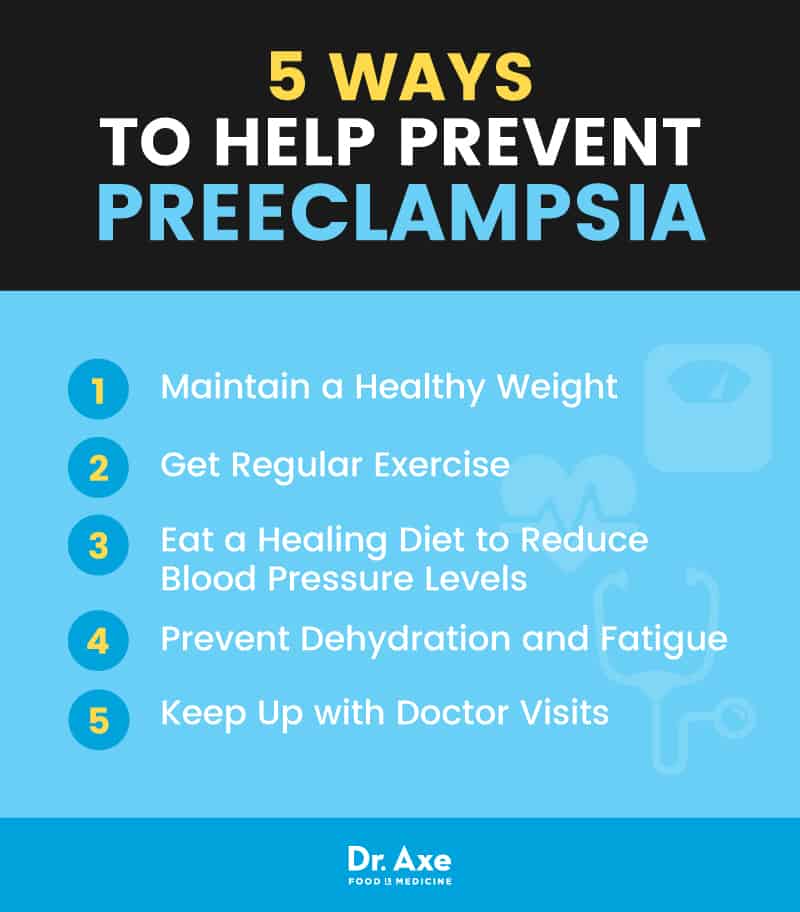 To stay hydrated and balance levels of sodium in your diet, drink enough water daily (at least eight glasses of water a day) and limit caffeinated or alcoholic drinks. Make sure to get enough sleep (at least seven to eight hours a night, or even more when pregnant) and build relaxing breaks into your day to reduce stress and feelings of being overwhelmed.

Looking for some easy natural stress relievers to incorporate into your day? Try stretching to soothe yourself or lying down and elevating your feet to give your mind and body a quick rest.

5. Keep Up with Doctor Visits

Visit your doctor as soon as you can after learning you’re pregnant to check for any risk factors that can make you susceptible to PE, such as whether or not anyone in your family has had HELLP syndrome, preeclampsia or other hypertensive disorders in the past. The earlier you learn about existing conditions, the better chance you have to prevent complications.

Throughout your pregnancy, keep up with regular prenatal visits and have your blood pressure and urine monitored. If you notice any sudden changes in how you’re feeling or have an inclination that something isn’t right, talk to a professional about any potential warning signs right away.

Preeclampsia affects both the mother and the newborn baby. In pregnant women, common preeclampsia symptoms include: (6)

In unborn babies, preeclampsia can cause:

You might notice that several symptoms of preeclampsia are considered common, even “normal” symptoms to experience during pregnancy. One of the hallmark signs of preeclampsia is swelling and pain in the hands and feet that develops during the second half of the pregnancy, usually in the late second or third trimesters.

Women with preeclampsia also experience higher levels of protein in their urine, which can show up on a test performed by their doctors. It’s normal to have some discomforts during pregnancy, but keep a close lookout for rapid changes, severe headaches, blurred vision or severe upper belly pain. These can signal organ damage and changes in blood pressure, which means you should call your health care provider right away.

While most pregnant women with PE notice several symptoms that raise a red flag, some women can develop preeclampsia without having any apparent symptoms at all, which is why doctors insist on monitoring and preventing high blood pressure levels along with checking protein content in the urine during pregnancy. This is especially true for women who are more susceptible to PE.

A number of risk factors for preeclampsia have been identified, including: (7)

Some researchers speculate that first-time mothers or new couples who have lived together for a shorter time period might be at a higher risk for preeclampsia, although study results have been mixed. Some research findings point to the fact that a shorter time period of sperm exposure (due to a newly formed couple getting pregnant) might make preeclampsia more likely. (9)

This concept is known as primi-paternity, and it’s been documented in some case studies where hospitals record the number of preeclampsia diagnoses in new couples compared to diagnoses in couples that have been together for longer. (10)

While it’s still debated, researchers believe that the underlying cause of preeclampsia might be that tissue within the placenta doesn’t develop correctly. Another cause of preeclampsia is that blood vessels constrict, resulting in high blood pressure and a reduced blood flow that can cut off vital nutrients and oxygen to the unborn baby, as well as the mother’s organs.

A low supply of healthy blood making its way to the uterus means that too little amniotic fluid is produced, the baby becomes underdeveloped and malnourished, and the placenta can become separated from the uterine wall (called placenta abruption, a dangerous condition before delivery).

Preeclampsia damages both the mother’s organs and blood vessels. Blood can begin to “leak” from tiny capillaries into various tissues where it isn’t intended to be stored, causing inflammation, swelling and water retention (called edema). The kidneys also suffer and can begin to spill protein into the urine, which is why pregnant women with PE usually show high urine protein concentrations on tests.

For doctors, one of the trickiest things about diagnosing and treating PE is that its symptoms have a lot of overlap with other pregnancy-related disorders. For example, HELLP syndrome and gestational hypertension cause similar symptoms, including high blood pressure, swelling, indigestion and pain.

HELLP syndrome — which stands for (H) hemolysis, or the breaking down of red blood cells, (EL) elevated liver enzymes and (LP) low platelet count — also occurs during later stages of pregnancy and is considered to be a variant of preeclampsia. The Preeclampsia Foundation notes that HELLP poses a serious risk for mortality, since up to 25 percent of HELLP pregnancies can end in liver rupture or stroke (called cerebral edema or cerebral hemorrhage). (11) Estimates show that around 15 percent of women who have preeclampsia will go on to develop HELLP syndrome, which translates to about 48,000 women per year in the U.S. alone.

More stillbirth deaths occur each year in the U.S. than deaths due to preeclampsia or HELLP syndrome (in developed nations, about 51 out of every 1,000 pregnancies end in stillbirth). Most deaths caused by preeclampsia and HELLP can be attributed to abruption of the placenta (the placenta prematurely separating from the uterus), intrauterine asphyxia (the fetus not getting enough oxygen due to problems with the placenta) and extreme prematurity of the fetus prior to birth.

How Preeclampsia Is Treated

Being diagnosed with preeclampsia is a scary experience overall, since at this time the only known “cure” for preeclampsia, eclampsia or other variants like HELLP syndrome is to deliver the baby. Some doctors choose to induce labor early to protect the mother. The exact time of birth depends on different factors, including how far along the pregnancy already is, how well the baby is developing and how severe PE has become.

Once the pregnancy reaches about 37 weeks, it’s more common and safe to induce labor and perform a C-section to prevent PE from worsening. But overall doctors like to wait until as late as possible in the pregnancy to deliver, since the closer the birth is to the intended due date, the better chance the baby has of developing fully.

Prior to delivery, women with preeclampsia are advised to rest a lot (sometimes even being put on bedtime and staying home, off their feet completely). Some mothers-to-be stay in the hospital for the weeks prior to labor ( a time period known as “antepartum”) to ensure blood tests are monitored and normal, while others are capable of staying home if their condition hasn’t worsened. Either way, doctors need to keep a very careful eye on blood pressure levels, the mother’s and baby’s heartbeats, water retention, urine concentration, and other symptoms that can develop due to complications.

Doctors use several different types of medications and treatments to keep preeclampsia under control, including:

Read Next: 6 Steps to a Healthy, Vibrant Pregnancy

We often talk about how to protect yourself from the sun and ...
Read More
Dr. Axe on Facebook 48 Dr. Axe on Twitter 0 Dr. Axe on Instagram Dr. Axe on Google Plus Dr. Axe on Youtube Dr. Axe on Pintrest 3 Share on Email Print Article 47