Symptoms and even chronic diseases related to heavy metal toxicity (also called heavy metal poisoning) is now considered to be a problem that millions of people deal with. (1)

Exposure to toxic heavy metals is believed to be a contributing factor, if not a root cause, of symptoms like low energy, mood disturbances and cognitive changes. Heavy metals first enter your bloodstream from exposure to farmed fish, contaminated water, dental fillings and household products. These metals then travel throughout your body and penetrate the cells of various tissues and organs, where they can remain stored up for years!

How do you treat heavy metal toxicity? Following a heavy metal detox plan is one of the best ways to start reversing symptoms. One thing to be aware of, however, is that while you work on overcoming metal poisoning, you might actually notice some symptoms getting worse before they get better. Potential heavy metal detox symptoms can include fatigue, loss of appetite and digestive issues.

What foods can help remove heavy metals from the body? As you’ll learn more about below, foods to include in a heavy metal detox include leafy green veggies, other non-starchy veggies, herbs, spices, algae and other superfoods, and bone broth.

Detoxifying treatments and certain supplements can also be incorporated into a natural heavy metal diet plan to help support your brain, nervous system, liver and other vital organs. Want to learn how to detox your body from heavy metals and other chemicals? Follow detox diet and treatment plan described below to help rid your body of toxins.

What exactly are “heavy metals”? Heavy metals are elements that can be toxic and very dangerous even in low concentrations. Heavy metals that can lead to toxicity (or “poisoning”) include: (2)

Heavy metal poisoning describes a number of health problems caused by exposure to environmental metals that accumulate inside the body. According to a report in Scientific World Journal, “Toxic metals such as arsenic, cadmium, lead, and mercury are ubiquitous, have no beneficial role in human homeostasis, and contribute to noncommunicable chronic disease.” (4)

Researchers have identified that significant exposure to at least 23 different environmental metals (called “heavy metals”) can contribute to acute or chronic toxicity. These metals are described as being heavy because they stick around in the body, especially hiding out in adipose tissue (fat cells). They are difficult to get rid of, making them similar to fat-soluble toxins. Body fat tries to protect the organs by trapping certain substances inside, including some metals, which causes them to linger. This is one reason weight loss can sometimes result in heavy metal detoxing, as fat cells shrink and release dormant toxins.

There is virtually no way to entirely avoid heavy metal exposure, considering metals are natural elements found all over the world in the food supply, water and ground. (5) Environmental metals are problematic because over time, they can accumulate within bodily tissues, often without the person who is affected even realizing this is happening. Heavy metal toxicity can result in damaged or reduced mental and central nervous function, plus damage to the vital organs — such as the liver, heart, endocrine glands and kidneys.

What Are the Signs and Symptoms of Heavy Metal Poisoning?

Some of the most common warning signs that you might be struggling with heavy metal toxicity include:

Where Do Heavy Metals Come From?

In high amounts, mercury is one of the deadliest metals there is. Certain studies have found that when nerves are exposed to mercury, the myelin sheath (the fatty substance that surrounds the axon of some nerve cells and helps with electrical signaling) can become severely damaged, interfering with how nerves communicate.

What are some warning signs and side effects associated with mercury poisoning? These include: changes to the central nervous system, irritability, fatigue, behavioral changes, tremors, headaches, problems hearing, skin damage and cognitive loss. (7)

If someone has reason to believe that they have had excessive exposure to metals, they should seek medical testing for metal poisoning by speaking with their doctor or integrative practitioner/naturopath. Heavy metal testing in the form of hair analysis or a blood test is now widely available and is useful for confirming suspected toxicity. Even if you choose not to be tested for toxicity, many of the diet and lifestyle changes described below will still be beneficial for immune system function, gut health, liver function and more.

The primary goal of a heavy metal detox is to remove accumulated heavy metals from your brain and nervous system. The kidneys, liver, heart, lymphatic system and respiratory system will also benefit from detoxification, such as a liver cleanse.

How are toxins removed from the body? The most common way is through chelation. Chelation therapy is a medical procedure (although it can also be performed at home) that involves the administration of chelating agents to remove heavy metals from the body by binding to molecules and allowing them to be dissolved and excreted in the urine.

Chelation is central to natural detoxification of heavy metals because it works with glutathione and other small molecules to promote excretion. It’s recommended that it be performed by a doctor since serious side effects are possible, such as removal of essential minerals and cognitive impairment. (8)

Other ways to detox the body of heavy metals include making dietary changes and using herbs and supplements, which help to break down metals into smaller molecules so they can be removed from urine, feces, sweat and even the breath.

Benefits of doing a heavy metal detox include:

Related: Brain Detox: Is It Time for a Cleanse? (Plus How to Do It)

First and foremost, changing your diet should be the first step you take to improve your overall health. What foods can help remove heavy metals from the body? 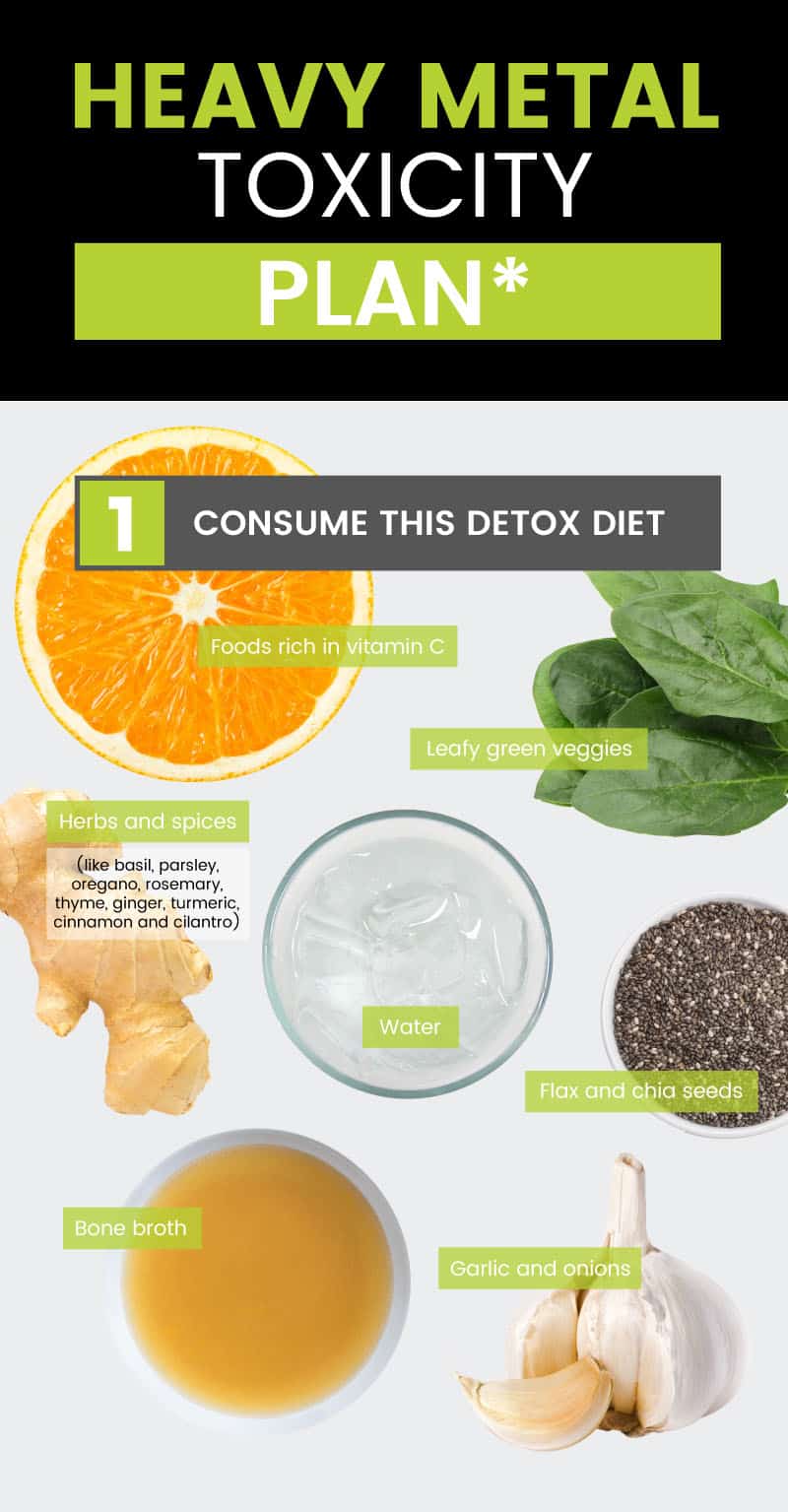 Foods to eat while doing a heavy metal detox include:

Foods to avoid while detoxing include:

Supplements to take that may help you overcome heavy metal poisoning include:

Treatment methods to use include: 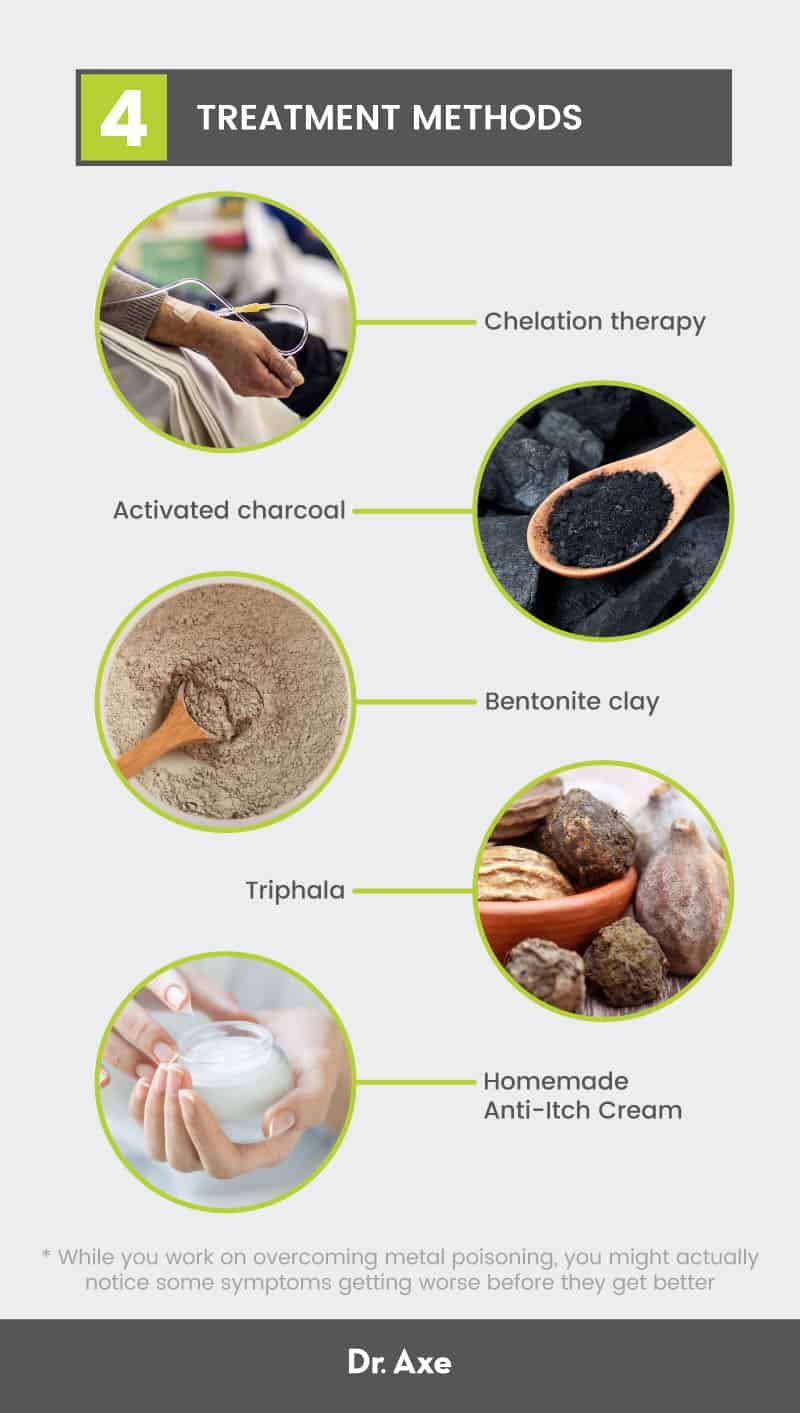 Detox drinks and recipes can help to naturally reduce inflammation, boost energy, support digestion, cleanse the liver and promote gut health.  Detox drinks are especially useful for providing raw vegetables, fruits and herbs that stimulate detoxification while providing vitamins and minerals. Many detox drinks can be made with ingredients you already have at home, like lemon juice, apple cider vinegar, cucumbers, leafy greens, berries, ginger, herbs or melon. You can also make detoxifying water drinks, which you can sip on throughout the day.

Below are recipes to incorporate into your heavy metal detox plan:

Heavy Metal Detox Symptoms + How to Deal with Them

When you begin to detoxify, certain symptoms can be expected as you body starts to acclimate. Before you wind up feeling better and seeing improvements in your health, you might actually feel worse at first for a brief period of time. This is a sign that your body is going through changes that might not feel very great, but ultimately they will leave you healthier once you get through them. Remember that your body heals itself, and in the process you might need to go through a transition phase that feels uncomfortable.

What are the side effects of detoxing? Potential heavy metal detox symptoms you might temporarily experience while you’re cleansing include:

Some people find that if they jump into a detox too “aggressively” and quickly, they wind up dealing with significant side effects/symptoms. It’s advised that you detox slowly and gradually; start by making dietary changes and then beginning incorporating herbs, supplements and treatments over the course of at least several weeks or months.

Try to stick with the detox plan outline above and be patient — it will be worth it! To ease symptoms, stay hydrated, get plenty of sleep, eat a nutrient-dense diet, manage stress and only do moderate exercises until you gain more energy.

How long can you expect it to take for a heavy metal detox to begin working? It really depends on how high your levels are, the source(s) of exposure and the efforts you make to rid yourself of these metals.

Remember that heavy metal exposure slowly takes place over many years, so getting rid of them will not happen overnight. It might take months for even longer for you reverse the problem, but it’s important to stay on track since toxicity can have a negative life-long impact on your health.

Because heavy metal toxicity causes such a range of health problems, it can be easy to confuse toxicity without another underlying health condition. If you have concerns about your heavy metal levels, it’s a good idea to see a doctor for testing who can help diagnose you. Regarding what to do amalgam about dental fillings, talk to your dentist about available options (I recommend seeking out a IAOMT-certified dentists who has been trained in biocompatible dentistry).

It’s especially important for women who are considering becoming pregnant in the near future to know their heavy metal levels, since toxicity can contribute to developmental problems in newborns. If a women has been diagnosed with high levels of a heavy metal, such as mercury, it’s recommended that she delay pregnancy by at least a few months so they can work on restoring normal levels first.

Read Next: Is Eating Tilapia Worse than Eating Bacon?