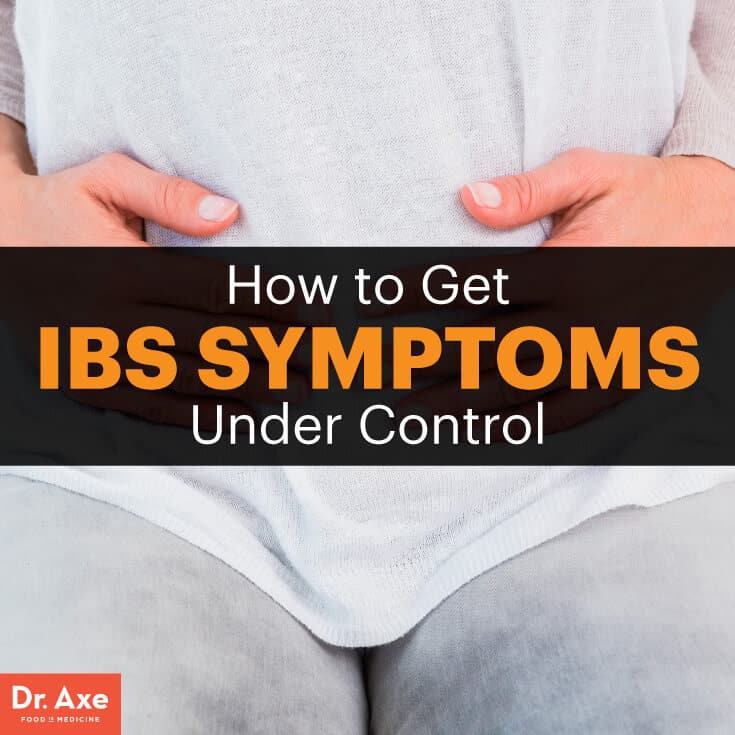 Wondering if your recurring digestive issues might mean you have irritable bowl syndrome (IBS)? As you’ll learn, IBS symptoms vary a lot from person to person and tend to come and go with stress and other lifestyle changes. Each person’s experience with IBS is a bit different, and certain symptoms often seem to be stronger or more frequent than others.

What is IBS? Irritable bowel syndrome is a term used to describe a type of digestive disorder that’s characterized by a group of common symptoms, including changes in bowel movements and abdominal pain. IBS affects more than 10 percent of the world’s population, and although it can affect anyone, it’s most common among young to middle-aged women (twice as many women as men have IBS, especially those under 50 years old). (1)

No tests can actually confirm whether or not someone has IBS, which is why tracking symptoms is so important. From a doctor’s standpoint, IBS is diagnosed when a cluster of symptoms occur together and last for at least several months. According to the International Foundation for Functional Gastrointestinal Disorders, a few of the biggest signs and symptoms of IBS include recurring abdominal pain and discomfort, plus changes in bowel habits (both frequency of when they happen and consistency of your stool). (2)

The good news is you can identify IBS symptoms and then treat them naturally through lifestyle changes and an IBS diet treatment plan. So what are the common symptoms of IBS, and what can you do about them? Let’s take a look.

The Most Common IBS Symptoms

IBS is technically diagnosed when digestive symptoms have been experienced for at least three to six months. It’s normal for just about all people to have times when their stomachs hurt, they have trouble going to the bathroom normally or their stool appears different than usual, so the duration of IBS symptoms is an important distinguishing factor.

Besides duration, the frequency that someone experiences IBS symptoms also tells a lot. For someone to have IBS, the symptoms should be present at least three days each month and often many more than this. For some people, several IBS symptoms might occur together in “clusters,” while for others only one or two symptoms seem to be strongest and most noticeable (like bloating, diarrhea or constipation, for example).

The most common IBS symptoms include: (3)

Although these aren’t “digestive issues,” the following symptoms are also often present in people with IBS: (4)

IBS vs. IBD: What’s the Difference?

IBS and inflammatory bowel disease (IBD) have some similarities in terms of symptoms, but IBD is a rarer, more serious condition that can even be life-threatening at times. IBD is a term used to describe digestive disorders including Crohn’s disease and ulcerative colitis, which are caused by inflammation of the bowel and autoimmune reactions that affect the gut, stomach and intestines. Compared to IBS, IBD symptoms are usually more severe and apparent — such as loss of appetite, blood in the stool/black stools and nutrient deficiencies caused by malabsorption.

The Crohn’s and Colitis Foundation of America estimates that about 1.6 million Americans currently have IBD (whether Crohn’s, ulcerative colitis, diverticulitis and other forms IBD) and that as many as 70,000 new cases are diagnosed in the U.S. each year. (5) As a comparison, estimates show that prevalence rates of IBS range from 9 percent to 23 percent depending on location (around 10 percent to 15 percent in the U.S., which is more than 31 million people!).

According to the Cleveland Clinic, IBS is not a life-threatening condition and does not make a person more likely to develop other colon conditions or IBD. (6) The symptoms of IBD are often hard to miss and commonly appear in children — plus they can be harder to treat than IBS.

Symptoms of IBD depend on where the disease occurs in the bowel and its severity but commonly include:

Although each person has different reactions to various foods, certain foods tend to trigger IBS symptoms more than others. This is especially true when it comes to carbohydrates called FODMAPS (fermentable oligosaccharides, disaccharides, monosaccharides and polyols), which researchers have found are commonly unabsorbed in the gut and easily become fermented — which can cause significant gastrointestinal  problems. (7) Reactions to fiber are also mixed, sometimes helping to relieve constipation but other times adding to gas and pains, so increase your intake slowly to test results.

Foods to try cutting out of your diet as part of an “elimination diet” for relieving IBS include:

Supplements that can help IBS symptoms include: (8) 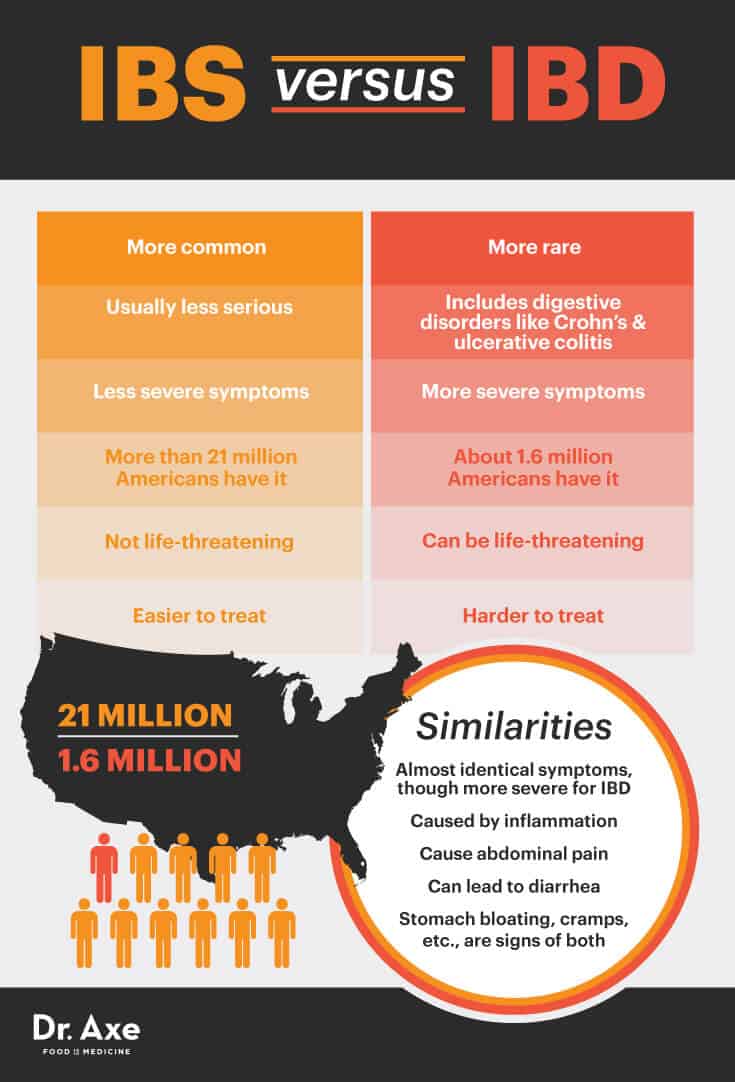 Higher levels of stress are tied to disturbances in digestion due to how stress raises inflammation and impacts hormone levels. Studies have found that anxiety, depression, a personality disorder and a history of childhood sexual abuse are all risk factors for IBS. But even stress caused from everyday situations, like work for family obligations, can impact digestion. (9)

What can you do to lower stress? Exercise, meditation, acupuncture, spending time in nature and keeping up with hobbies you enjoy can all help as natural stress relievers. You can also use relaxing essential oils to help lower stress while also fighting inflammation within the digestive tract, including ginger, peppermint and fennel essential oils. Add one drop of your oil of choice to water three times daily, or rub over abdomen twice daily mixed with carrier oil.

Studies have found that regular exercise (including aerobics, lifting weights, team sports or yoga) help control stress and can improve digestive health. A 2011 study that appeared in the American Journal of Gastroenterology found that increased physical activity improves GI symptoms associated with IBS and improves quality of life, so much so that it should be used as a primary treatment modality — just another in a long line of exercise benefits. (10)

Fecal transplants (FMT), or microbiota transplants, have been shown to be an effective procedure in combating conditions such as Clostridium difficile and other digestive disorders and symptoms. A 2018 Norwegian study analyzed randomized patients, ages 18–75, with IBS and whether their condition improved with the assistance of FMT via colonoscopy. The study found that the FMT promoted significant symptom relief in the active treatment group, and no serious adverse events could be attributed to the procedure. Although this is a breakthrough for additional treatment of IBS, the findings also indicate that larger studies are needed to further confirm the results of the study. (11)

Studies show the exact causes of IBS are complex and different for every person, since many factors in someone’s life can affect digestion. (12) Even when all other digestive disorders and food allergies are ruled out, and a physical blockage or structural problem of the digestion system cannot be found, IBS is still a big deal or something to take seriously. The more time you take to experiment with different factors in your life to see how they might cause your IBS symptoms, the more information you have to help you find relief.

Researchers believe that the underlying cause of IBS symptoms is abnormal functioning of the nerves, enzymes and muscles within the digestive tract. These help manage the absorption of nutrients after you eat, fluid levels, gas and the release of bowel movements. (13)

One major factor that determines how the digestive system works is actually your stress levels and moods, since the gut is closely connected to the brain. The two actually communicate constantly via the vagus nerve so the gut can receive signals from your central nervous system (brain and spine) that cause it to become irrigated and unpredictable. (14) Stress and digestion are also directly related because the gut is capable of producing, or not producing, certain neurotransmitters, such as serotonin, which have important implications for how you feel.

While there is not one specific cause of IBS that applies to everyone, common factors contributing to IBS include:

Although it’s really up to each individual to manage his or her own IBS symptoms, this doesn’t mean you should skip visiting your doctor if you think you might have IBS.  Sometimes people mistake other, more serious symptoms for IBS and choose not to get a diagnoses, which can lead to underlying health problems going unnoticed.

How do you know if your symptoms are likely not due to IBS? If you have any of the symptoms listed below, talk to a doctor since these can sometimes be caused by things like thyroid disorders, anemia or infections:

How IBS Is Diagnosed

Irritable bowel syndrome is different than certain other digestive disorders or problems because there are no structural problems in the intestines of people who have IBS (for example, no blockages of the colon), which means it can sometimes be a hard condition to diagnose. There are no tests that can definitively reveal if someone has IBS or does not. (15) A diagnoses can only be made through a process of elimination and observing symptoms. This can cause frustration among people suffering from persistent digestive issues who can’t get a clear answer on what’s causing their symptoms.

Doctors often like to discuss with patients how their IBS symptoms are triggered and also how they tend to go away. Some of the most common questions doctors might ask you about your IBS symptoms in order to make a proper diagnoses and help treat your condition include:

If you visit your doctor regarding your condition in hopes of finding relief from reoccurring IBS symptoms, you can expect to talk about your medical history, likely undergo a physical exam and possibly have several extensive tests done in order to rule out other digestive disorders. The tricky part to treating IBS comes after a diagnosis has been made, when it’s really up to the patients to experiment with their own diets, exercise and sleep routines, plus to figure out how stress might contribute to their symptoms.

Read Next: The IBS Diet and Food Cures

Do your energy levels plummet once the summer months are over? Does ...
Read More
Dr. Axe on Facebook 2207 Dr. Axe on Twitter 14 Dr. Axe on Instagram Dr. Axe on Google Plus Dr. Axe on Youtube Dr. Axe on Pintrest 1397 Share on Email Print Article 3.6K

Stress: We all deal with it, yet we know how much better ...
Read More
View All