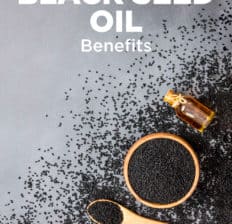 If you take a look at the hundreds of scientific peer-reviewed articles that have been published about black seed oil benefits, one fact is clear: It can help the body overcome a number of health issues. No wonder this health-promoting oil has been used for thousands of years in traditional medicine.

With virtually no side effects, the healing prowess of black seed oil — made from black cumin seeds — is actually quite unbelievable, and it boggles the mind that most people have never even heard of it.

What Is Black Seed Oil?

Black seed oil is made from the seeds of the black cumin (Nigella sativa) plant, which belongs to the ranunculus family (Ranunculaceae). The black cumin plant is native to southwestern Asia, the Mediterranean and Africa.

It has been grown for centuries for its aromatic and flavorful seeds that can be used as a spice or as an herbal medicine.

Quite possibly, the most promising research has been done connecting Nigella sativa to multi-drug-resistant bacteria. This is a really big deal because these so-called “superbugs” are becoming a significant public health risk.

Information available by the National Institute of Health indicates that:

In a study conducted by Jawaharlal Nehru Medical College in India, researchers determined just how potent black seed oil is against some of these superbugs and paired it against several antibiotics, such as Amoxicillin, Gatifloxacin and Tetracycline. According to the study, “Out of 144 strains tested, most of which were resistant to a number of antibiotics, 97 were inhibited by the oil of black cumin.”

Next to oregano oil, few things on the planet can boast this type of potency to microbes. The study uncovered that it was especially effective against multi-drug-resistant strains of P. aeruginosa and S. aureus.

The key to understanding the health benefits of black seed oils lies in the presence of three key natural phytonutrients: thymoquinone (TQ), thymohydroquinone (THQ) and thymol. These incredible phytochemicals lead to all kinds of amazing black seed oil benefits.

Of the many ways that black seed oil benefits the body, the nine that stick out in the scientific literature tout its ability to help prevent cancer, diabetes, obesity, hair loss, skin disorders and infections like MRSA.

Thanks to its potent phytochemicals and antioxidant capabilities, black seed oil has been shown to help naturally treat cancer. Croatian scientists evaluated the antitumor activity of thymoquinone and thymohydroquinone using an animal model study and discovered that these two phytochemicals found in black seed oil resulted in a 52 percent decrease in tumor cells.

Additionally, researchers from the Sidney Kimmel Cancer Center at Jefferson Health found that not only can black seed kill off pancreatic cancer cells, but it also appears to inhibit development of pancreatic cancer. This cancer preventative ability is attributed to black seed’s thymoquinone and its anti-inflammatory properties.

The liver is one of the most important organs in the body. Nearly every toxin gets processed through the liver, and the bile from the liver is the key to digesting fats and keeping your mind and body happy and healthy.

For those who have struggled with poor liver function due to medication side effects, alcohol consumption or disease, black seed oil could greatly speed the healing process.

In a recent animal model study, scientists discovered that black seed oil benefits the function of the liver and helps prevent both damage and disease.

Explained in a recent article published by the Journal of Endocrinology and Metabolism, researchers from the Indian Council of Medical Research highlight that black seed oil “causes gradual partial regeneration of pancreatic beta-cells, increases the lowered serum insulin concentrations and decreases the elevated serum glucose.”

This is actually quite profound because Nigella sativa is one of the few substances on the planet that is suggested to help prevent both type 1 and type 2 diabetes.

In fact, according to the study, black seed “improves glucose tolerance as efficiently as metformin; yet it has not shown significant adverse effects and has very low toxicity.” This is huge because metformin, one of the most commonly prescribed type 2 diabetes drugs, can cause a wide slew of side effects, including:

Black seed oil weight loss claims actually do have some science behind them. The Journal of Diabetes and Metabolic Disorders published a study systemically reviewing the literature for plants that have anti-obesity properties and discovered that oil from black cumin seed oil was among the most effective natural remedies on the planet.

Another systematic review and meta-analysis published in 2018 highlights the findings of at least 11 placebo-controlled clinical trials that reveal the ability of a black seed supplement to help lower body weight.

Supplementation was shown to decrease body mass index (BMI) and waist circumference. It’s also important to note that there were no serious side effects of black seed supplementation reported in any of the studies.

In a study conducted by Iranian researchers, Nigella saliva was found as effective as the skin cream Betamethasone in improving quality of life and decreasing severity of hand eczema.

As long as you don’t have an allergic reaction to black seed oil, it does not come with a laundry list of terrifying side effects like conventional creams.

Betamethasone, for example, may cause swelling in your face or hands, swelling or tingling in your mouth or throat, chest tightness, trouble breathing, skin color changes, dark freckles, easy bruising, and muscle weakness. Weight gain around your neck, upper back, breast, face or waist is also in the realm of possibility.

In addition to being a natural skincare aid, there are also black seed oil health benefits for hair. Not surprisingly, black seed oil is often featured on lists of natural ways to boost hair and scalp health in numerous ways.

Since it contains nigellone, shown by research to be an impressive antihistamine, it may help with hair loss due to androgenic alopecia or alopecia areata. With its antioxidant, antibacterial and anti-inflammatory properties, it can also help the health of the scalp in general, discouraging dandruff and dryness, and improve hair health at the same time.

Of all the superbugs that this powerful oil can kill, methicillin resistant staphylococcus aureus (MRSA) is one of the most important. MRSA plagues hospitals and nursing homes across the globe because ordinary staph infections are becoming resistant to generic antibiotics.

The elderly population is especially at risk because it is generally associated with invasive procedures, such as surgeries, intravenous tubing and artificial joints. Primarily due to weakened immunity, the growing population of senior citizens has made MRSA a global public health risk.

Thankfully, one of the strongest black seed oil benefits may help. Pakistan scientists took several strains of MRSA and discovered that each one was sensitive to N. sativa, proving that black seed oil can help slow down or stop MRSA from spreading out of control.

Compounds in black seed oil have also been analyzed for their antifungal properties. In an effort to offer a solution to the growing antifungal resistant problem people have with yeasts and molds, a recent study was conducted with the purpose of determining if Nigella sativa seed oil could help.

Published in the Egyptian Journal of Biochemistry & Molecular Biology, scientists tested thymol, TQ and THQ against 30 human pathogens and were surprised to discover that:

What this study tells us is that Nigella sativa oil carries a unique chemical constituency that is not only effective individually, but more importantly also collectively. Essentially proving that fungus and molds cannot exist in the presence of these phytochemicals, it is no wonder why researchers seek to solve the superbug problem with black seed oil.

In addition to possibly helping with hair loss, there are some other really impressive black seed benefits, like its ability to naturally improve fertility.

What did researchers find? The results revealed that the black seed oil group had improvements in their sperm count as well as sperm motility and semen volume.

A systematic review published in 2015 in the Journal of Herbal Medicine also looked at the effects of black seeds on male infertility. The researchers reviewed studies that took place between 2000 and 2014, and overall, they concluded that black seed can “positively influence sperm parameters, semen, Leydig cells, reproductive organs and sexual hormones.”

Did you know that there may even been black seed oil health benefits for cholesterol? It’s true.

A study using an animal model published in 2017 found that an aqueous extract of Nigella sativa not only had anti-diabetic effects on animal subjects, but also helped with cholesterol. After six weeks of giving the diabetic animal subjects low doses of black seed, total cholesterol, LDL (“bad”) cholesterol and glucose levels all came down while HDL (“good”) cholesterol increased.

Overall, it appears that black seed may help lower cholesterol as well as blood sugar and blood pressure.

Related: What Are Nigella Seeds? Top 5 Benefits + How to Use

Is It Safe? Risks and Side Effects

Black seed may cause an allergic rash when taken by mouth or applied to the skin. Before using black cumin oil topically for your skin and hair, it’s a good idea to perform a patch test to make sure you don’t have a negative reaction to the oil.

When taken internally, black seed oil side effects may include upset stomach, vomiting, or constipation. For certain individuals, it may increase seizure risk.

Talk to your doctor before using black seed oil if you are pregnant, breastfeeding, currently take any medication or have a medical condition (especially diabetes, low blood pressure or a bleeding disorder). If you’re taking black seed oil and have surgery scheduled, it’s recommended to stop taking it at least two weeks prior to your surgery date.

As with all oils, make sure to store your black seed oil away from heat and light and out of the reach of children.

There are so many black seed oil uses. For starters, black cumin oil can be used topically, but always make sure to dilute it with a a few teaspoons of a carrier oil like coconut or almond oil.

Once diluted, it can help with common skin concerns like acne and eczema thanks to its antibacterial and anti-inflammatory properties. Some people also find it helpful for psoriasis and rosacea.

It can easily be added to homemade massage oils and lotions to experience the many black cumin seed health benefits. For a warming massage, simply add one drop to one tablespoon of a carrier oil.

To boost hair and scalp health, a few drops of oil can be added to hair products like shampoo and conditioner.

If you enjoy making homemade fragrances with oils, it’s good to know that this oil has a peppery scent and works well as a base note.

With its spicy flavor, a high-quality (100 percent pure, therapeutic-grade and certified USDA organic) black seed oil can be used in all kinds of recipes, from meat main courses to soups and stews. You can also add it to beverages like chai tea latte and smoothies.

A premium option should always be 100 percent pure, therapeutic-grade and certified USDA organic.

Some companies also specify that their black seed oil is cold-pressed, which typically means that the oil is extracted from the Nigella sativa seeds without the use of heat from an external source resulting. Sometimes, cold-pressed oils are said to be more flavorful.

If you don’t like taking liquid supplements, you can also find black seed oil capsules.

The appropriate black seed oil dosage can vary by individual and health status. At this time, there is no standard dosage, but the following dosages by mouth have been studied in scientific research to date: