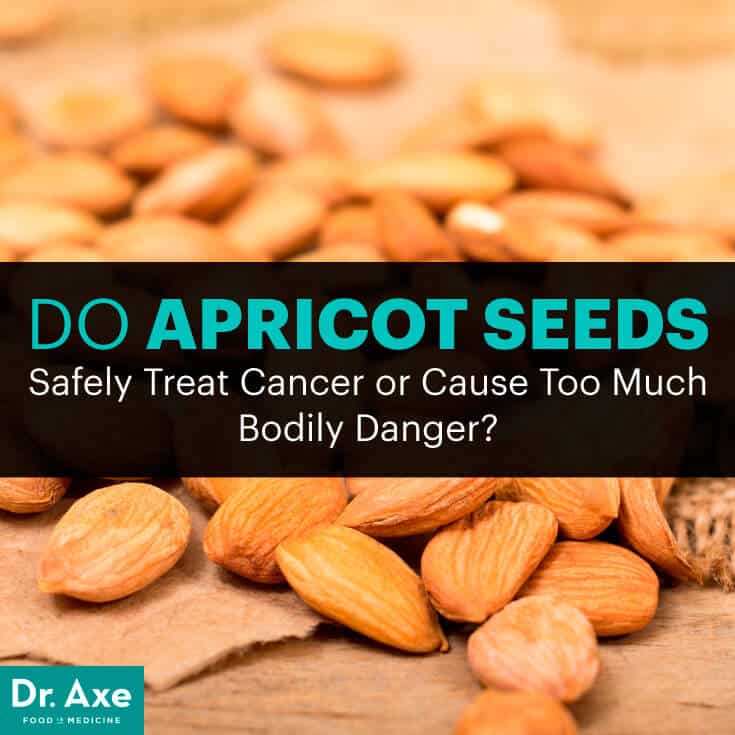 Nutritionally, apricot seeds are similar to other nuts — they’re rich in healthy fats and provide some fiber and iron. There are a number of ways that apricot seeds are used in our foods today. Seeds or kernels of the apricot grown in central Asia and around the Mediterranean are so sweet that they’re sometimes substituted for almonds. The Italian liqueur amaretto, and amaretti biscotti, is flavored with extract of apricot seeds as well as almonds; plus, oil pressed from these cultivars has been used as cooking oil.

Sweet apricot seeds are sometimes sold as snacks or for baking, and they contain very little or no amygdalin, a controversial component in the kernel. People eat apricot seeds as a snack, very much like nutrition-rich almonds. Bitter apricot seeds, on the other hand, definitely contain amygdalin, which can raise cyanide levels once consumed.

The worrisome issue here is that many times apricot seeds aren’t labeled properly, whether they are sweet or bitter, and snacking on handfuls of these tasty seeds is potentially dangerous to your health. It’s hard to find a clear answer about the safety of these seeds — sweet apricot kernels are known to boost immunity and fight off bodily infections, but there is also a major debate about its chemical compound amygdalin (or Laetrile, its patented drug name, or so-called “vitamin B17,” its marketing name) and its efficacy as a natural cancer treatment.

Apricot seeds contains a toxic chemical known as amygdalin, which is also referred to as Laetrile. Some companies call this compound “vitamin B17” in order to label and market the product as an essential substance. In the body, this chemical is converted to cyanide, which is poisonous and can cause serious harm.

There has been interest in using apricot kernels, which are inside the seeds, to fight cancer because of this toxic chemical that fights cancer cells before it’s converted to cyanide and spread throughout the body. Some researchers believe that the cyanide would only harm the cancerous tumor, but scientific studies suggest that this isn’t always true.

The name Laetrile is patented drug name used to describe a purified form of the chemical amygdalin, a plant compound that contains sugar and produces cyanide. This compound is found in the pits of many fruits (such as apricot seeds), raw nuts, and in other plants, such as lima beans, clover and sorghum.

Laetrile has been used in the U.S. for cancer treatment since the 1970s; after the treatment was banned in the 1950s because it was deemed too toxic, states argued that it wasn’t fair that the U.S. government could block access to new and promising cancer therapies. After court cases in Oklahoma, Massachusetts, New Jersey and California challenged the FDA’s role in determining which drugs should be available to cancer patients, Laetrile was legalized in more than 20 states.

In 1980, the U.S. Supreme Court acted to uphold a federal ban on interstate shipment of Laetrile, and as a result, the use of Laetrile has greatly diminished. Today, the compound is primarily manufactured and administered in Mexico and some clinics in the U.S. Although patients turn to this alternative treatment, the positive and negative effects of Laetrile are still up for debate.

Laetrile, which is a proposed nontoxic intravenous form of amygdalin, was first used as a cancer treatment in Russia in 1845 and then in the U.S. in the 1920s. At the time, amygdalin was taken in pill form, but this was deemed too toxic and the research done on this treatment was abandoned. By the 1950s, Laetrile was patented and tested for its ability to kill cancer cells on animal cells, whole animals, transplanted tumor cells and humans. After decades of research, mostly done on animals and cells, it was proposed that cancer cells are more susceptible to the toxic effects of Laetrile than normal cells.

Another theory suggests that the cyanide released by Laetrile has a toxic effect beyond its interference with oxygen utilization by cells, so cyanide increases the acid content of tumors and leads to the destruction of lysosomes, which are compartments inside of cells that contain enzymes. These destroyed lysosomes then release their contents and kill the cancer cells, which stops tumor growth.

According to the National Cancer Institute, Laetrile can be administered orally as a pill, or it can be given by injection (intravenous or intramuscular). (1) It’s commonly given intravenously for a period of time followed by pills, which is referred to as oral maintenance therapy.

The biggest concern with Laetrile treatment is the cyanide levels that grow in the body. Research shows that the incidence of cyanide poisoning is much higher when Laetrile is taken orally because intestinal bacteria and some commonly eaten plants contain enzymes that activate the release of cyanide. On the other hand, when Laetrile is taken intravenously, the cyanide levels that are released are very low.

Study results investigating the anticancer effects of Laetrile are mixed. Some show that it’s beneficial in avoiding cancer and keeping the spread of existing cancer cells to a minimum, while others show no effects on cancerous cells. While many practitioners assert that Laetrile is a qualified cancer treatment, most agree that it shouldn’t be the primary cancer treatment for any patient — instead, certain experts recommend that it be used as an add-on supplement.

A 1982 study published in the New England Journal of Medicine evaluated the efficacy of Laetrile on 178 patients with cancer. (2) The patients received Laetrile intravenously, plus they followed a “metabolic therapy” program consisting of oral Laetrile treatments; adopted a special diet restricting caffeine, sugar, meats, dairy products, eggs and alcohol; plus patients took high doses of enzymes and vitamins.

The result of this 21-day treatment indicated that there was no substantive benefit in terms of cure, improvement or stabilization of cancer; improvement of symptoms related to cancer; or extension of life span. Several patients displayed symptoms of cyanide toxicity or had blood cyanide levels approaching the lethal range after intravenous treatment, but the levels were not elevated after oral treatment. One patient, who had gastric carcinoma with cervicallymph node metastasis, experienced a partial response that was maintained for 10 weeks while on Laetrile therapy.

In a 2006 study by the Department of Physiology at Kyung Hee University in South Korea, when Laetrile extract was combined with cancerous human prostate cells, the extract helped significantly induce apoptosis (programmed cell death) in the prostate cancer cells. The researchers conclude that amygdalin may offer a valuable, natural option for treating prostate cancer. (3)

There are several scientific studies involving animals and cell cultures, and the results are mixed. Some found that Laetrile treatment inhibited the growth of primary tumors in mice, while others reported that none of the solid tumors or leukemias that were investigated responded to Laetrile at any dose that was tested. (4) Because of these varying results, the medical community still hasn’t agreed on Laetrile’s efficacy as an anticancer treatment. (5)

Aside from the debate over apricot seed’s ability to fight cancer, there are other health benefits that come from the presence of the plant compound amygdalin or so-called “vitamin B17.”

Apricot seeds contain special properties that slow down the spread of illness throughout the body by killing harmful cells, but the exact way that this occurs does this isn’t well understood.

A study published in the International Journal of Radiation and Biology found that the amygdalin compound stimulated the immune system by causing a statistically significant increase in the ability of a patient’s white blood cells to attack harmful cells. (6) One theory of amygdalin’s effects suggests that transformation of normal cells into dangerous cells that can cause disease is normally prevented by beneficial enzymes produced within the pancreas. So “vitamin B17” may help increase the production of pancreatic enzymes that destroy harmful properties within the body.

Although some research that tested the components of apricot seeds as anticancer compounds showed no change in cancer cells, some of them reported that patients declared a decrease in pain. In a series of case reports published in 1962, 10 patients with metastatic cancer (meaning it spread from one part of the body to another) were treated with a wide range of doses of intravenous Laetrile. Pain relief was the main reported benefit; plus reduced swelling of lymph nodes and decreased tumor size were also reported. (7)

In Chinese pharmacology, apricot seeds are used to treat arthritic pain. The fiber present in apricot seeds traps acids and other toxins in the digestive system, pulling them out of the body. The seeds are also detoxifying, so they reduce inflammation in the body and serve as a natural arthritis treatment. Arthritis is a joint disease that causes swelling and pain in the joints.

Apricot seeds may cause a low blood pressure reaction due to the formation of thiocyanate, a powerful blood pressure-lowering agent. In the early 20th century, thiocyanate was used in the treatment of hypertension, but it’s no longer used because of reports of toxicity; however, sodium nitroprusside, a metabolite of thiocyanate, is still used for the treatment of a hypertensive emergency. An emergency occurs when blood pressure in the arteries is elevated for an extended period of time, which can lead to health conditions including heart disease, coronary heart disease, stroke, aortic aneurysm, peripheral artery disease and chronic kidney disease.

It’s unknown if this is an effective treatment long-term or if the effects are only temporary; research suggests that once amygdalin is metabolized, it causes enzyme beta-glucosidase production that interacts with intestinal bacteria to detox the body and lower blood pressure naturally.

The amygdalin content found in apricot seeds varies depending on their chemical components and whether they are bitter or sweet. The small or wild apricots that are native to Northern China and the Himalayas are higher in amygdalin, while the varieties that are found in the U.S. are less potent.

When you buy apricot seeds in the local health food store, the amygdalin levels are most likely less potent than the varieties that cause cyanide poisoning — but the trouble is that you can’t be sure. Make sure to read the label very carefully. It is better to purchase and consume sweet apricot seeds that are grown in the U.S. When apricot seeds are cooked or fermented, the toxicity is reduced.

Side Effects and Interactions

Studies suggest that when using Laetrile as a form of cancer or pain treatment, oral Laetrile causes more severe side effects than injected Laetrile. These side effects can be increased by frequent consumption of apricot seeds and other crushed fruit pits, raw almonds, and fruits or vegetables that contain beta-glucosidase (such as celery, peaches, bean sprouts and carrots). Taking high doses of vitamin C orally, along with Laetrile consumption, can also increase your chances of getting cyanide poisoning.