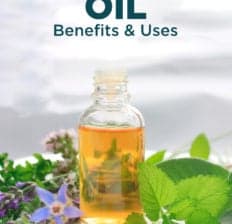 As a common herbal treatment in traditional medicine practices for hundreds of years, borage oil has numerous uses — ranging from treating skin flare-ups to lowering pain. The most beneficial aspect of using borage oil, either topically on the skin or internally in capsule form, is that it has strong anti-inflammatory effects.

Borage seed oil is becoming increasingly popular as a natural anti-inflammatory supplement because it has one of the highest amounts of gamma-linolenic acid (GLA) of all seed oils. GLA is one type of omega-6 fatty acid that the body cannot make on its own, so we must get it from outside sources.

While to some degree we’re all able to convert other forms of omega-6 fatty acids (like the type found in nuts or seeds called conjugated linoleic acid) into GLA, it’s preferable and more effective to consume it directly, including from dietary supplements.

What Is Borage Oil?

Borage oil (BO) is a natural substance that provides high levels GLA, which is a type of polyunsaturated fatty acid (PUFA). It’s derived from the seeds of the borage plant, which has the species name Borago officinalis and is indigenous to North Africa and Europe.

Gamma-linolenic acid is not found in high amounts in the human diet. Therefore, most people turn to supplements to provide its benefits, including both BO and evening primrose oil.

Studies show that borage seed oil is made up of roughly 23 percent GLA, making it one of the richest sources. (As a comparison, evening primrose oil has about 9 percent.) This means that it can be effective even when fewer capsules are taken daily, which also poses a lower risk for side effects.

How Does Borage Oil Work?

Omega-3 and omega-6 PUFAs play an important role in fighting disease because together they help control the release of molecules that are responsible for the body’s inflammation responses (some being prostaglandins, leukotrienes and cytokines called interleukins).

Due to its antioxidant properties and ability to fight inflammation, borage oil benefits include the ability to help treat a wide range of both short- and long-term illnesses, including:

Dietary supplements containing gamma-linolenic acid are thought to be helpful for treating inflammatory disorders because they help correct defective conversions of fats to metabolites, such prostaglandin E1. When the body isn’t able to complete an important metabolic step that keeps certain enzymes at appropriate levels, it’s easier for inflammation, which is the root of most diseases, to dangerously increase over time.

Gamma-linolenic acid is also thought to have circulation-boosting effects and a positive effect on metabolic processes. Borage oil is often used along with evening primrose or fish oil supplements to help manage inflammation and for their pain-reducing effects. You might see these supplements sold together, such as in joint-supporting or anti-aging supplements.

Results can take several weeks up to several months to fully kick in, with some people needing up to six months for borage oil’s full pain-reducing benefits to become very noticeable.

In addition to being taken by mouth, BO is used on the skin to improve the skin’s barrier.

This oil is also sometimes added to fortified infant formulas in order supply essential fats that assist in growth.

What is borage oil good for? Here’s more about borage oil’s benefits:

On top of supporting a healthy immune response, BO can have positive effects on cell death (apoptosis) of toxic cells. Once it enters the body, GLA is converted to a substance called dihomo-γ-linolenic acid (DGLA). This acts as a precursor to prostaglandins and leukotriene compounds that the immune system produces.

DGLA is believed to lower inflammation because it inhibits leukotriene synthesis, which is partly responsible for raising autoimmune reactions and thrombotic effects.

People taking omega-3 fatty acids along with BO treatments seem to have even better results.

BO is known to have anti-mutagenic properties and antioxidant capabilities that help fight the growth of cancerous cells.

In laboratory studies, BO has exhibited cytotoxic activities that significantly shorten the life span of toxic cells while prolonging the life span of the healthy host. BO supplementation is also recommended for protecting DNA and because of its ability to lower underlying oxidative genetic damage that contributes to disease development.

BO seems to work like a natural remedy for rheumatoid arthritis pain, especially when used in combination with other conventional painkilling medications. There’s evidence that some people notice a decrease in joint pain, swelling and severity of tenderness following as little as six weeks of regular BO treatment.

Why is borage oil good for skin? One of the most well-researched uses for BO is treating skin disorders like eczema and atopic dermatitis.

BO has been shown to help correct deficiencies in skin lipids (oils) that are caused by low levels of delta-6-desaturase activity. It can also restore a normal acidic skin pH and increased epidermal levels of enzymes that protect the skin.

When the skin can’t produce enough protective oils, the result is dysregulation of the immune system, increased inflammation and specific immune responses that result in skin flare-ups, including those typical of eczema and atopic dermatitis.

Because human skin can’t synthesize GLA from the precursors linoleic acid or arachidonic acid on its own, supplementing with BO helps act like a natural eczema remedy for people who are already too low in essential fatty acids critical to skin health. While people with atopic dermatitis have most commonly used evening primrose for its beneficial fats, borage contains two to three times more GLA than evening primrose and therefore may be a better option.

While study results have been mixed, and not every study has shown that BO can improve eczema or atopic dermatitis in the majority of patients, certain people seem to respond more positively to treatment than others. Some studies have found that people taking up to 720 milligrams daily of GLA for two months experienced significant improvements in health of the cutaneous skin barrier.

BO has been found to help improve the function of the lungs, including in people with inflamed respiratory infections and disorders such as acute respiratory distress syndrome (ARDS).

BO supplements taken in capsule form can help speed up healing time associated with coughs, the common cold or flu; reduce the length of time spent in the hospital or taking medications; and stop respiratory symptoms from worsening.

According to Memorial Sloan Kettering, borage contains mucilage, a sticky mixture of plant sugars that can act as an expectorant to produce phlegm in patients with respiratory issues and coughs.

There’s evidence that infants and premature babies receiving BO have better rates of growth and development.

If you struggle to lose weight, here’s some good news: There’s evidence that BO may contribute to less body fat accumulation compared to more refined fats.

This is beneficial because scientists now believe that lean people tend to have more brown fat than overweight or obese people, and brown fat might act more like muscle than like white fat does. Other animal studies suggest that BO can also help improve insulin sensitivity and fight insulin resistance, which is tied to type 2 diabetes. 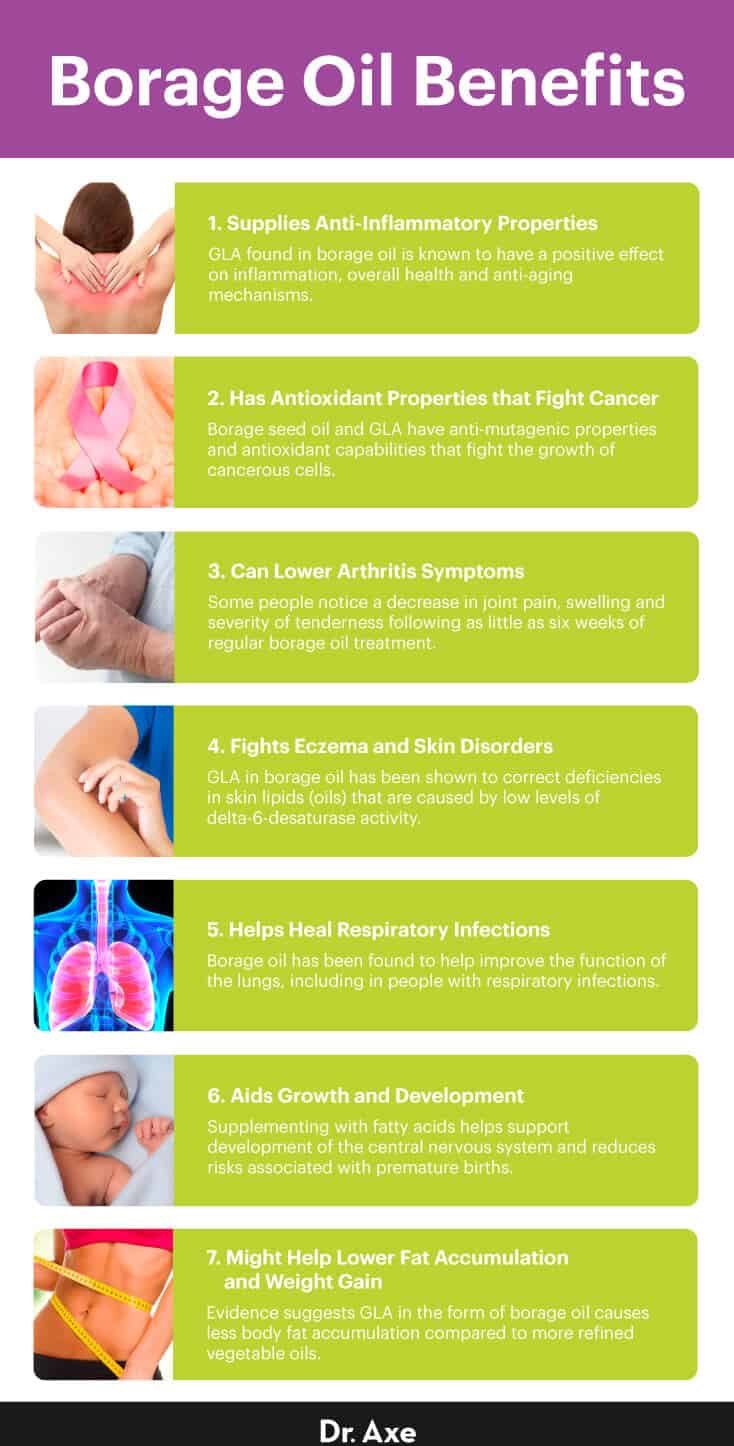 What are the potential side effects of borage oil? Although it’s considered to be generally safe for both internal and topical use, some people experience digestive issues when taking BO, especially in larger doses. These include:

Is borage oil bad for your liver? There’s some debate as to whether or not certain constituents found in borage can be harmful to the liver. In the past, a small percentage of people taking BO have experienced toxicity, and all manufactures are now obligated to sell certified “hepatotoxic PA-free” BO to avoid even small traces of carcinogens.

Pregnant women shouldn’t use BO due to its potential for inducing labor. BO also has the ability to act like a blood thinner, so it’s not suitable for anyone taking medications like aspirin or warfarin.

Additionally, if you’ve experienced seizures in the past, it’s important to talk to your doctor before beginning use with this supplement. Ask for additional information regarding how borage might interact with any seizure medications you’re taking.

The appropriate dose of BO depends on your medical history and what you’re using it for. It’s available over the counter in drug stores, online and in health food shops.

In most cases, for generally healthy adults the typical dosage of BO is usually 500 milligrams to 3,000 milligrams taken once or twice daily.

For patients hoping to relieve inflammation and pain caused by conditions like rheumatoid arthritis, a higher dose up to three grams is usually most effective. One study found that a combination of 1.8 grams BO and 2 grams of fish oil per day helped reduce rheumatoid pain.

For anyone new to BO, a lower dose of around 500 milligrams is a good place to start.

Topical BO products are also available and work best when applied to the skin to help improve healing. Read directions for topical applications since products vary.

It’s recommended that you mix BO with a carrier oil before applying to your skin. Try mixing about 12 drops per one ounce of almond, jojoba or olive oil, and then apply twice daily while monitoring your reaction.

When purchasing BO, always look for a high-quality brand that is ideally certified organic. Some brands guarantee maximum potency and are tested and verified by a third party.

It’s also a good idea to buy capsules that are packaged in light-resistant containers and to store borage oil somewhere dark and cool, since the oil can become rancid when heated and exposed to UV light.

It can also help absorption and healthy immune function if you consume plenty of vitamin C, zinc and magnesium, all of which support your body’s ability to maintain healthy skin, heart health and more.

20 Healthy Drinks You Should Add to Your Diet
2

The Top Benefits of Lemon Nutrition (Plus How to Use Lemons)

What Is a Huckleberry? The Surprising Immune-Boosting Benefits of Huckleberries

If you ever spend time hiking or foraging in the woods in ...
Read More
Dr. Axe on Facebook 22 Dr. Axe on Twitter 6 Dr. Axe on Instagram Dr. Axe on Google Plus Dr. Axe on Youtube Dr. Axe on Pintrest 236 Share on Email Print Article 264

When it comes to naturally lowering cholesterol, nothing works quite as well ...
Read More
View All