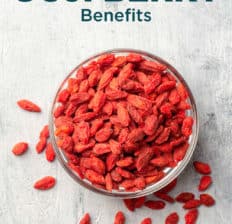 The goji berry plant, or  “wolfberry fruit” as it’s known in China, is a great source of immune-supporting polysaccharides and antioxidants prized for for over 2,000 years in Traditional Chinese Medicine. Some legends report that goji berries were eaten by monks in the Himalayan Mountains and steeped in hot water to help aid meditation and obtain greater health, vitality, longevity, energy and stamina.

What does the research tell us are the benefits of goji berries? Low in calories, fat-free, a good source of fiber and a high-antioxidant food, goji berry benefits include the ability to help fight free radicals that lead to disease, effectively manage your weight and experience better digestion.

Usually eaten raw, dried, or in liquid or powder form, versatile goji berries contain a wide range of phytonutrients, vitamins and trace minerals, giving them the name “superfood berries” by many health experts.

In fact, according a study published by the Journal of Alternative and Complementary Medicine, eating goji berries can lead to “increased ratings for energy levels, athletic performance, quality of sleep, ease of awakening, ability to focus on activities, mental acuity, calmness, feelings of health, contentment, and happiness and significantly reduced fatigue and stress.”

What Is the Goji Berry?

Goji berries, which have the scientific name Lycium barbarum, grow on a type of boxthorn plant that belongs to the Solanaceae plant family. This plant family also includes other fruits and veggies like potatoes, tomatoes, eggplants and chili peppers.

The goji berry is usually dried and has a bright orange–red color with a sweet and tangy flavor.

The medicinal use of goji berries in Traditional Chinese Medicine (TCM) dates back to at least 200 B.C. Goji berry benefits were even mentioned in “Shen Nong Ben Cao Jing,” an ancient book detailing the medicinal and agricultural knowledge of the mythical Chinese emperor Shen Nong and the oldest book on Chinese herbs in existence.

Besides the goji berry fruit, other parts of the goji plant too — including the flower, leaf, seed and root bark — have long been praised for their benefits.

As a surprisingly high-protein snack, dried goji berry benefits also offer a good dose of fiber, over 20 different vitamins and minerals, and of course, a wealth of antioxidants.

Nutrition facts for goji berries can vary widely depending on the exact type of berry, how fresh they are and how they’re preserved.

Different sources claim that goji berry benefits include varying degrees of nutrients. Below is a range of the vitamins, minerals and other phytochemicals present in goji berries.

Here are goji berry nutrition facts for 28 grams of dried goji berries (five tablespoons), according to the U.S. Department of Agriculture:

How does goji berry nutrition compare to some other popular fruits?

According to Superfoodly, a small serving of dried goji berries has an oxygen radical absorbance capacity (ORAC) score — which measures the antioxidant value of various foods — of 4,310. By comparison, an apple has an ORAC score of 2,568, raisins a score of 3,406, blueberries a score of 4,633 and pomegranate seeds a score of 4,479.

All are good sources of various antioxidants, but goji berries stand apart due to their amino acids (protein), fatty acids and specific antioxidants. It’s rare for a fruit to provide amino acids, especially 11 types that are considered “essential” because the body can’t make them on its own.

Goji berry nutrition benefits include the ability to:

Like most other superfoods, goji berries are an excellent source of antioxidants that help boost the immune system and protect the body from high levels of oxidative stress and inflammation, since they fight free radical damage.

One of the surprising goji berry benefits you might not know about is that each serving has about four grams of protein and 18 different amino acids, plus over 20 other trace minerals, including zinc, iron, phosphorus and riboflavin (vitamin B2). Ounce for ounce, goji berries offer more beta-carotene than carrots and more iron than soybeans and spinach, which makes them a great source to help stave off iron deficiency.

Goji berries are similar to other berries — like blueberries and raspberries — in that they supply high levels of antioxidants vitamin C and vitamin A. These are two nutrients key for building immunity and preventing common illnesses like a cold, plus more serious chronic diseases like cancer or neurodegenerative decline.

Of the may antioxidants present in goji berries, carotenoids like zeaxanthin and precursors to vitamin C are the most extensively researched. High levels of these compounds give gojis a reputation for battling cancerous cells, fighting tumor growth, decreasing inflammatory cytokine levels and detoxifying the body of harmful toxins.

Goji berry benefits also extend to other parts of the body thanks to their polysaccharides and glycoconjugate compounds that promote unique bioactive immunomodulating, anti-tumor and antioxidant activities in the brain, liver, reproductive organs and digestive tract.

Gojis are also reported to have anti-aging properties and show anti-tumor activities against various types of skin cancer cells by inhibiting tumor growth and inducing apoptosis.

Similar to the benefits you get from eating other berries, goji berries are loaded with beta-carotene (a pigment found in plants and fruits), which helps promote healthy skin and even acts like a natural skin cancer treatment.

In an animal study done by the Faculty of Veterinary Science at the University of Sydney, drinking 5 percent goji berry juice supplied antioxidant activity that offered significant protection against skin disorders and lipid peroxidation of UV light damage. Two known endogenous skin antioxidants are present in goji berries, heme oxygenase-1 and metallothionein, which were found to be involved in the photo-immune protection.

The results show that drinking goji berry juice increases protection against free radical damage from the sun. Gojis provide additional photoprotection for people who are susceptible to skin cancer and other skin disorders.

Goji berry benefits also include the ability to protect eyes from age-related diseases like macular degeneration, the leading cause of blindness in older adults. Goji berries are a natural treatment for macular degeneration and beneficial for vision because of their high levels of antioxidants (especially zeaxanthin), which can help stop damage from UV light exposure, free radicals and other forms of oxidative stress.

One study published in the American Academy of Optometry’s Optometry & Vision Science journal found that drinking goji berry juice daily as a dietary supplementation for 90 days increased plasma zeaxanthin and antioxidant levels significantly, which protect eyes from hypopigmentation and accumulation of oxidative stress compounds that can damage the macula.

Other studies show that the goji berry benefits eye health by protecting the retina from ganglion cells, meaning gojis’ antioxidants act as a natural treatment for glaucoma.

As part of a healthy diet, a natural diabetes remedy and a way to increase insulin sensitivity, goji berries are one of the best choices for those with trouble balancing blood glucose levels and its effects.

Reducing sugar intake and increasing responsiveness to insulin are extremely important for the growing number of diabetes cases in the U.S. and other developed nations today, so goji berries make a much better snack alternative and sweetener to high-sugar packaged goods and sugar additives.

Goji berries are believed to offer liver protection and are used along with traditional herbs like licorice, ganoderma, gynostemma and pentaphylla in many liver cleanses. This is one reason they’re commonly used as a tonic ingredient in soups and to make sweet or savory porridges for people who are sick.

They’re thought to be one of the best ingredients for promoting liver and kidney health, according to TCM, since goji berry benefits the body’s liver and kidney meridians to restore vitality, strength and well-being. This makes them a great kidney stone natural remedy as well as a good food for cleansing the blood.

7. Keep Your Energy and Mood Up

According to a study from the Journal of Alternative and Complimentary Medicine, drinking goji berry juice regularly can help increase energy levels and moods and improve digestive health, too.

Participants who drank goji juice for two weeks had improvements in terms of their feelings of “general well-being,” increased energy levels and better gastrointestinal function. Try having some gojis as a pre-workout snack to get you going and keep your stamina up.

Traditionally, the Chinese believe that goji berry nutrition benefits the reproductive system and offers increased fertility. Goji berries are believed to increase sperm count and the vitality of sperm.

Gojis are mainly used in TCM for treating “yin deficiency,” which is believed to be the “female” aspect of the personality and body. Knowing that goji berry benefits include the ability to increase mood, reduce stress and fight inflammation, TCM practitioners prescribe a dose of six to 15 grams daily for balancing yin and restoring hormonal health.

Results from a study done by the College of Public Health at Wuhan University in China showed gojis protect against testicular tissue damage induced by heat exposure, raise antioxidant activity of superoxide dismutase in the reproductive system, raise sexual hormone levels and protect against DNA oxidative damage to testicular cells. These findings support the folk reputation that gojis are effective for fighting infertility.

What are the side effects of goji berries? While most people can tolerate goji berries well, possible goji berry side effects can include a stomachache or allergic reaction, especially if you eat them in high quantities.

Can goji berries make you sick? People who use blood thinners or takes diabetic medications can possibly have negative reactions eating a lot of goji berries.

Are goji berries bad for you if you’re allergic to other berries? In regard to allergies, gojis are not a common allergen and are suitable for children, too, but if you have a known allergy to other berries, you might want to use caution and clear them with your doctor first.

If you notice symptoms like tingling in your mouth, a skin rash, itchiness or other signs of allergies, then you’ll probably need to avoid eating goji berries.

Where to Buy and How to Use

Considered both a fruit and an herb, goji berries are most easily found in health food stores or sold in bulk in Asian and European gourmet markets. To get the freshest, high-quality berries, look for them in either dried packages or sold by weight at specialty bulk food stores, where you might be able to get them at a better price.

Many packaged, high-quality trail mixes or “superfood” dried mixes also include goji berries, so look for them on ingredient labels.

Other ways to find products containing goji berries include:

One of the reasons some people hesitate to eat more of them is because goji berries tend to be expensive. Like all “superfoods,” the price depends on if they’re organic, pure and naturally sourced.

Goji berries have a naturally sweet but slightly tart taste, very similar to cranberries. Some people also feel they have a slight “herb-like” aftertaste, which makes them especially good for savory recipes as well as sweet.

Gojis look similar to raisins since they’re normally dried, but they have a brighter pink color and a special sweet/tart “bite” to them.

Once you find some goji berries, what can you do with them?

There are loads of ways to easily add more goji berries to your favorite meals. Traditionally, goji berries were cooked before consumption in China and used in recipes like rice congee, almond jelly and Chinese tonic soups, or in combination with chicken or pork, vegetables, and other beneficial plant foods like wild yams or licorice root.

The berries are also boiled to make herbal goji berry tea and goji berry juice or wines (similar to how grapes are used).

Try adding goji berries to these simple and healthy recipes: