Mullein has been used since ancient times, and its use and popularity only seem to be increasing as time goes on. The leaves, flowers and roots of the plant are used for the treatment of various inflammatory diseases, diarrhea, asthma, coughs and other lung-related ailments — making it one of the top herbs for healing.

An oil made from the flowers of the mullein plant is very commonly used to treat the pain and inflammation associated with earaches for children and adults alike. This plant might even be able to fight influenza, herpes viruses and some bacteria that cause respiratory infections.

Traditional use of this therapeutic plant, in its various forms, includes the treatment of bruises, burns, hemorrhoids and gout. The herb can be ingested, applied topically and even smoked. In the Appalachia region of the U.S., the plant has historically been used to treat colds and upper airway infections. Additionally, the leaves have been applied topically to soften and protect the skin.

Let’s talk about why mullein might already be, or soon will be, an impressive favorite in your herbal arsenal of natural remedies.

Mullein is the name for any of the over three hundred species of the genus Verbascum, which are large biennial or perennial herbs native to northern temperate regions, especially eastern Eurasia.

Common mullein (Verbascum thapsus) grows up to seven feet tall and has a single stem with large, thick, velvety leaves and pale-yellow, slightly irregular flowers. This is the type that you will most commonly find in stores.

Sometimes the plant is referred to as Aaron’s rod because of it’s tall with yellow flowers.

Mullein leaf can be used to make a nourishing tea that’s been used in folk medicine. You can buy mullein leaf tea at your local grocery or health store, or you can make your own at home.

Drinking tea from this yellow flowered plant helps to relieve issues like sore throat, cough, colds, hoarseness and bronchitis. Some even use it to ease digestive complains like diarrhea and joint pain.

To make the tea, the leaves are simply simmered in boiling water and then strained.

It also contains approximately 3 percent mucilage, which is thought to be responsible for the soothing actions that the herb has on the body’s mucous membranes. Mullein’s saponins are believed to be the explanation for the herb’s expectorant actions.

Mullein has well-established emollient and astringent properties, making it an excellent choice for temperamental ear ailments.

A tincture containing the plant alone or a combination of mullein and other herbs is commonly found in health stores (and online) as a tried-and-true natural remedy for ear aches and infections.

A study published in The Archives of Pediatrics and Adolescent Medicine in 2001 concluded that an herbal ear drop with mullein were just as effective as an anesthetic one.

People also use mullein oil to naturally treat their dog’s ear infections and other health problems with success. That’s right — don’t forget that natural remedies can be used on your animal friends, too!

Bursitis is a painful condition that affects the small, fluid-filled sacs (called bursae) that cushion the bones, tendons and muscles near your joints. Bursitis occurs when the bursae become inflamed and research indicates that mullein has anti-inflammatory effects.

The most common locations for bursitis are in the shoulder, elbow and hip. To help bursitis naturally, you can simply prepare some mullein tea and soak a clean cloth in the warm tea.

The cloth can then be regularly applied over the affected region, which should help to decrease inflammation and serve as a natural remedy for bone and joint pain. You can also create a healing poultice. 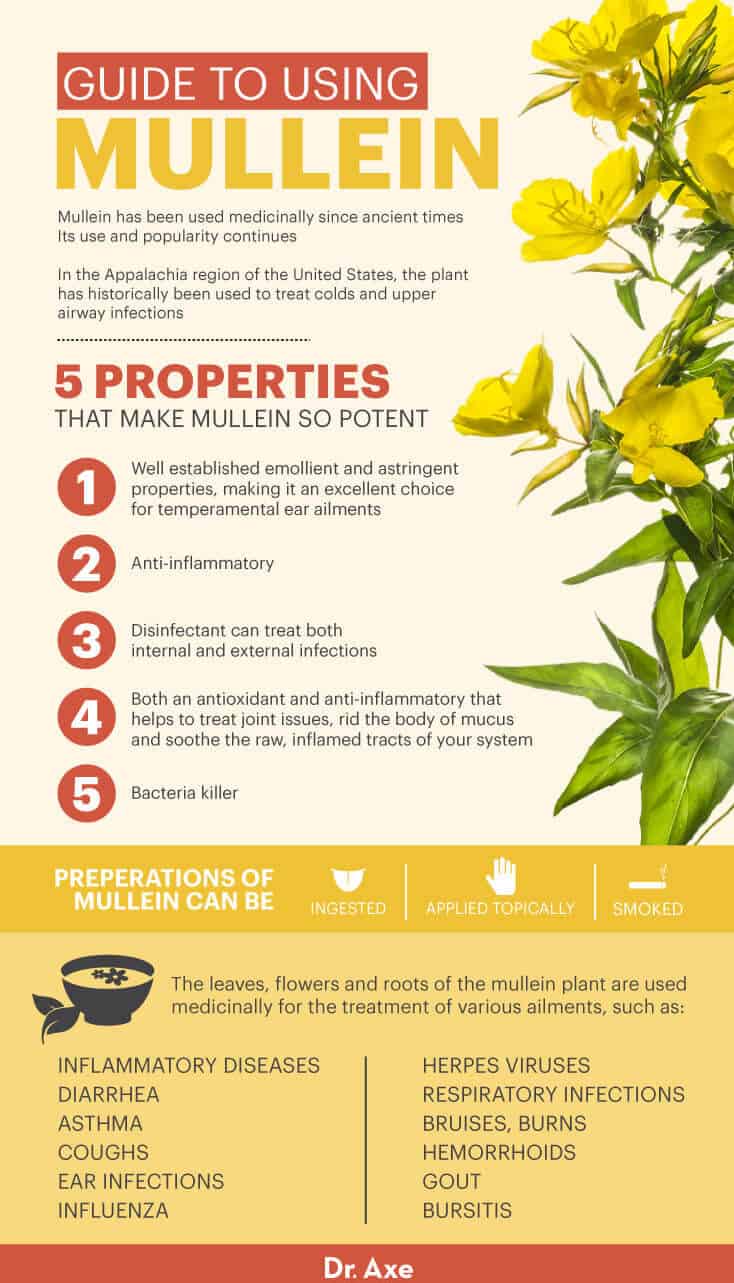 Mullein oil is potent disinfectant that can treat both internal and external infections. Recent research published in Medicinal Chemistry shows that the plant has antimicrobial properties and can be used for the treatment of infectious diseases.

Internally, it has been known to treat infections in the ears, colon, urinary tract (including a vaginal yeast infection) and kidneys. When applied externally, it can help to fight infections on the skin.

The leaves contain an extract with powerful antioxidant and anti-inflammatory that helps to rid the body of mucus and soothes the raw, inflamed tracts of your system, like your throat. Mullein as an asthma remedy may be effective because of its soothing impact on the bronchioles.

Smoking mullein is used by some for respiratory issues. In folk medicine, research suggests that dried herb can be placed in a pipe and smoked to treat congestion in your lungs. However, this is definitely a questionable way of using it and if used, should never be done for a prolonged length of time.

Plus, smoking mullein is one of the least effective means of using it’s beneficial properties. If you’re a smoker and having lung congestion, then smoking mullein rather than tobacco can be helpful.

Researchers at Clemson University confirmed the antibacterial properties of mullein. In 2002, these researchers reported that the plant’s extracts are effective against several species of disease-causing bacteria including Klebsiella pneumoniae, Staphylococcus aureus, Staphylococcus epidermidis and Escherichia coli more commonly known as E. coli.

Mullein has a lengthy medicinal history for being a therapeutic astringent and emollient. Since ancient times, great mullein has been utilized as a remedy for skin, throat and breathing problems.

The ancient Greek physician, pharmacologist and botanist, Dioscorides recommended the herb for lung diseases of the lung.

The fresh leaves boiled in milk and consumed daily is a traditional Irish folk remedy for tuberculosis.

Mullein has historically been using in non-medical ways, too! People have used it to make torches and as a dyeing agent. Yellow mullein flowers have been used as a source of yellow hair dye. It’s also used as a flavoring ingredient in alcoholic beverages.

Some species have seeds that are considered toxic. The seeds of the species N. phlomoides in particular contains a type of poisonous saponin and are slightly narcotic. These seeds have been used to intoxicate fish, making them easier to catch.

Mullein can be found in dried, powdered, tea, tincture and oil formulations at your local health store or online.

You can make your own mullein tea at home by combining 1 cup of boiling water with 1–2 teaspoons of dried leaves or flowers and letting the mixture steep for ten to 15 minutes. This tea should be consumed one to four times per day for medicinal reasons.

For ear infections, you should follow the directions on the mullein ear oil bottle. Typically, you should drop slightly warmed ear oil into the problematic ear two to three times per day. For ages 1–10, use 1 drop and for those over 10 years old, use 2 drops.

As mentioned, smoking mullein is also possible and has been used as a natural remedy in folk medicine. Using this smokable herb can be done with a pipe, but it certainly isn’t the healthiest approach to using the plant for healing.

You can buy mullein tea prepackaged, but it’s also easy to make at home if you have some fresh or dried mullein leaves and/or flowers.

Tea: For sore throat, coughs and other upper respiratory issues, brew a strong mullein tea using 1 cup of boiled water and 1–2 teaspoons of dried leaves or flowers. Let the mixture steep for 10–15 minutes. Drink at least 1 cup per day until symptoms improve.

Hot Oil Extraction: Combine 1 cup mullein flowers with 1/2 cup olive oil in a glass double boiler over a low flame. Heat the mixture slowly for about three hours. Allow to cool and then strain using cheesecloth to remove all plant parts. Pour the strained oil into dark glass bottles and seal tightly.

Cold Oil Extraction: A cold mullein weed extraction can also be made by covering the flowers with olive oil in a glass container with a lid, set the container on a sunny windowsill to steep for 7 to 10 days, strain and store in dark glass bottles.

When used properly and for a short term duration, mullein side effects are highly unlikely. In general, the plant has no serious recorded side effects. However, there have been isolated case reports of people developing side effects like contact dermatitis.

Never use the herbal ear oil if your eardrum is perforated and make sure to consult a physician if symptoms are serious or do not improve quickly with natural treatment.

In terms of interactions, mullein has been reported to inhibit the effectiveness of antidiabetic drugs and it may intensify the effects of muscle relaxants and lithium. If you’re taking prescription diuretics, you should talk to your doctor before using the herb since it can also have a diuretic effect.

Mullein products are not recommended for nursing or pregnant women.