Unlike the Urban Dictionary listing states, sassafras does not refer to dripping sarcasm. It’s actually a type of tree that grows in North America and East Asia, providing a pleasant aroma — and a great deal of folk medicine remedies.

Over 38 years ago, however, sassafras in its pure form was outlawed by the U.S. Food and Drug Administration from foods, beverages and other products due to the health risks associated with one of the three main compounds found in it, called safrole. (1)

Today, sassafras trees grow freely and are still used in many homes to make sassafras tea or homemade sassafras root beer. More concerning is the practice many now have of creating essential oil from the bark of this tree for the purposes of creating dangerous sassafras drugs, MDA (street name “sassafras”) and MDMA (commonly known as “ecstasy”).

Even though these facts might be discouraging, you may be surprised to know that regular research is conducted on the benefits of sassafras to the human body. There are reports of some incredible prospects for the use of this folk remedy. (2)

Let’s look at the research behind the good, the bad and everything in between to unearth what sassafras can truly do.

The name sassafras is actually a genus of tree encompassing three living and one extinct species of tree. Generally, when you hear people refer to it, they are most likely referring to sassafras albidum, grown widely in North America.

Functioning more like an herb, sassafras does not contain notable calories or vitamins. The bark contains three major compounds: methyleugenol, safrole and camphor. (3)

The only one of these three that is not permitted for use within the U.S. (and several other countries) is safrole. Safrole does occur naturally in a variety of food products, such as cinnamon and nutmeg, but the amounts found are so negligible that these products are still considered safe for FDA standards. (4)

Camphor was taken off the market during the 1980s due to these same safety concerns but reintroduced in the early 1990s as an approved ingredient.

Although it’s not commercially produced in the U.S., sassafras tea and sassafras root beer are still homegrown favorites in many areas where the trees are found.

The Benefits of Sassafras

1. May Be an Effective Treatment for Certain Cancers

The compounds in sassafras, though considered carcinogens in some ways, have been the subject of anticancer research for some time.

Most notable of these is safrole. Safrole has been found to have potentially destructive effects against the following types of cancer:

Meanwhile, the camphor may potentially protect against the spread of colon cancer. (15)

The methods by which cancer cells are killed are complex, but it seems that one reason compounds like safrole cause cell death in some cancers might be the way they target the “endothelial-to-mesenchymal transition,” shortened as EndoMT. (16)

EndoMT is a complicated biological process that has only recently been studied for the way it may impact the spread of fibrotic disorders like cancer. (17) Safrole induces the EndoMT process and might be a new way to help treat cancer.

Although this research does not definitively prove that these compounds “cure” any cancer, the results are significant in the fight to develop natural cancer treatments.

Sassafras could potentially be a treatment for leishmaniasis, a parasitic disease in tropical and subtropical climates as well as southern Europe. When an extract from sassafras albidum bark is used on leishmaniasis parasites, it seems to be able to kill the parasites without negatively affecting the nearby cells. (18)

On a diabetic diet plan, I have seen people successfully reverse this chronic condition just by adjusting what they eat and drink.

At least one study on rats, conducted at Guru Jambheshwar University of Science and Technology in India, suggests safrole from sassafras bark might be as effective as current drug therapies for managing diabetes, as it improves the blood sugar levels and insulin resistance characterized by diabetes. (19)

4. May Interact Positively with Some Pharmaceuticals

Although I generally recommend avoiding conventional medicine for many conditions that can be controlled through dietary means, there are situations in which you may choose to use them for a particular reason.

If this happens, there are some “convoy” substances suggested in traditional Persian medicine that can cause your body to more efficiently metabolize drugs or foods. It seems that sassafras albidum can help increase the absorption of certain medications or food items. (20)

Inversely, one of the chemicals in sassafras, methyleugenol, may interact positively in the body to decrease the effectiveness of certain poisons, according to research published in Archives of Toxicology. (21)

Two newly discovered compounds in sassafras function as acetylcholinesterase inhibitors (AChE inhibitors), as noted in research from Yulin Normal University in China. (22) While some of these chemicals can cause serious damage, the class sassafras falls into is known as “reversible,” which means it can have some therapeutic benefits.

One of the most common medical uses of AChE inhibitors includes Alzheimer’s treatments. They are also used in some cases to treat glaucoma, poisoning and schizophrenia. (23)

6. Promising Topic in the Treatment of Epilepsy

Since anti-seizure medications often have problematic side effects, scientists are working to develop different treatment methods, including some using natural compounds that might have seizure-stopping potential.

Safrole seems to inhibit lactate dehydrogenase, which is one of the mechanisms doctors try to prevent seizures in epilepsy. (24)

Camphor, also found in sassafras, seems to have the ability to improve blood circulation and allow more cold and warm feeling sensations to return. Researchers at the School of Nursing at Asahikawa Medical University applied petroleum jelly containing 5 percent, 10 percent and 20 percent camphor or 2 percent menthol separately to nine adult participants. The researchers concluded, “The present results indicate that camphor induces both cold and warm sensations and improves blood circulation.” (25) 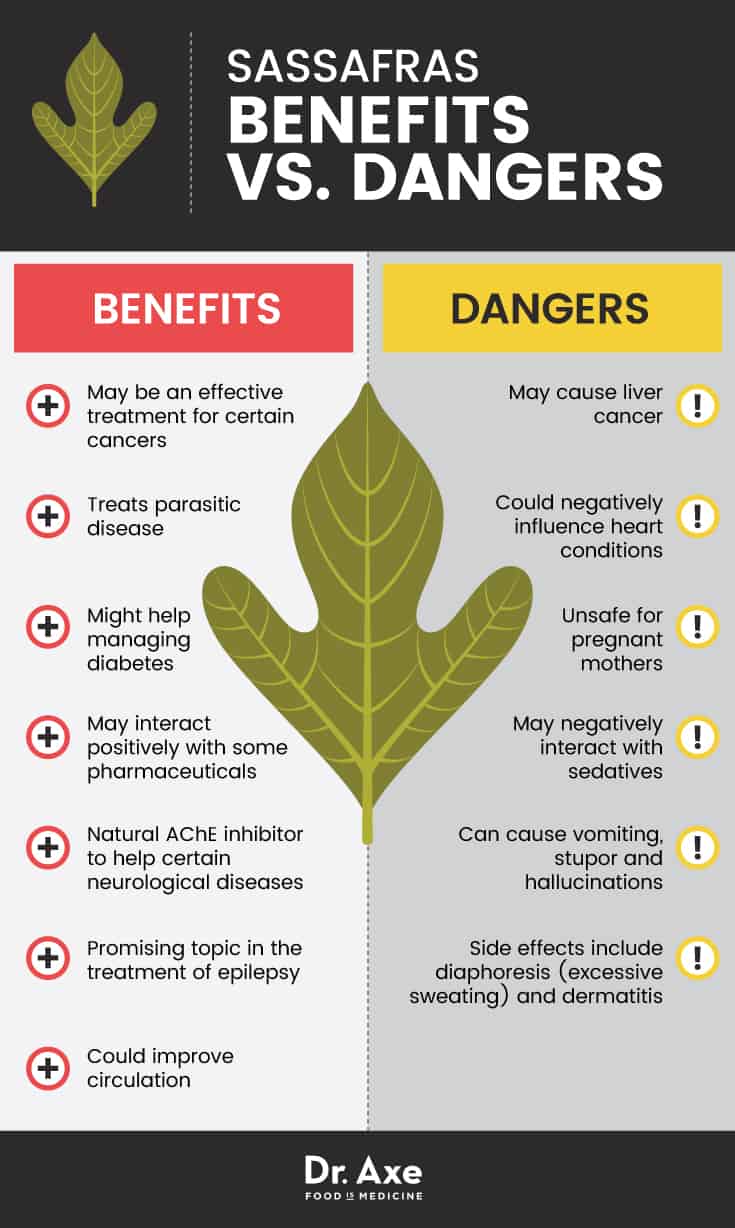 1. May Cause Liver Cancer

Over and above any other potential problem with sassafras, research has focused on the potential carcinogenic capacity of the compounds in it.

It’s a controversial topic. When studying rat and mice models, researchers have found that both safrole and methyleugenol cause malignant liver tumors. (26, 27) Pure safrole injection seems to be the most potent cancer-causing method.

That’s the main reason why the FDA outlawed safrole from food, beverage and cosmetic products in 1979. However, the story doesn’t truly end there, and many believe the reports on safrole toxicity to be quite exaggerated. The reasoning they offer comes from various sources.

For one, a study all the way back in 1977 showed that the metabolites found in rats after developing these cancerous liver tumors aren’t found in humans given the approximate dose. (This, of course, occurred before safrole usage was forbidden.) (28)

Second, there’s a difference in injecting a pure extract of a chemical compound into a body and consuming much smaller amounts of that compound through the diet. (29)

Proponents of sassafras usage have stated that this ban is not consistent with other legal substances. In one report, the claim was made that one can of old-fashioned root beer, made with pure sassafras, would be considered 1/14th as carcinogenic as a can of regular beer due to alcohol content. (30)

Rat and mouse models aren’t always the best predictors of disease, since not everything that causes diseases like cancer in them will have the same impact on humans. It’s just a starting point scientists use for research.

Since the research is so inconsistent (remember above where I referenced the studies where sassafras compounds actually may help prevent certain cancers?), others have compared the differences in dosage that are considered “carcinogenic” in animals.

For example, for mice, it takes only about 51 mg/kg/day to induce cancer. This means that a mouse weighing somewhere around 25 grams would need to be consume or be injected with about 1.3 milligrams of safrole to reach a point where cancer occurs 50 percent of the time. However, the amount to induce cancer in rats is almost nine times higher.

Even using the most conservative estimates (from the mouse model), assuming the numbers compared exactly the same from mice to humans, an average-sized male would have to consume over 4500 milligrams of safrole every day to reach the “carcinogenic” threshold. (31) For comparison, a cup of homemade sassafras tea contains around 200 milligrams of safrole.

Some reports are even more extreme in what they find causes cancer, claiming it takes up to 1,000 mg/kg/day in rats to induce cancer. (32) The amount of safrole that equates to in a human body would be astronomical and virtually impossible to take in on a regular basis.

Still, the FDA found it prudent to ban safrole from products in relatively small amounts.

There are those who claim this was because of the “two birds with one stone approach” — as the government focuses efforts in fighting the war on drugs, eliminating commercial sources of safrole makes it that much harder for people to illegally produce MDMA (ecstasy) or its similar counterpart, MDA (sassafras drug). By getting rid of a potential carcinogen, the FDA also removed a possible illegal drug source.

There’s a chance sassafras could be dangerous for those suffering from heart disease. At least one report out of China shows that sassafras oil containing safrole could increase “plaque vulnerability,” meaning the potential of plaque stores in the arteries or veins to rupture. (33)

If this were to happen, the presence of safrole could cause an interruption in plaque within the body and possibly contribute to cardiac events like heart attack or stroke.

Multiple sources, including WebMD, claim sassafras has caused spontaneous abortion in some pregnant mothers. Therefore, it is never recommended to consume sassafras while pregnant. (34)

4. May Negatively Interact with Sedatives

While some medications can benefit from sassafras supplementation, taking it is doubly unsafe when consumed with sedatives.

Sassafras has also been reported to cause other side effects, including: (35)

It’s interesting to note that these are similar side effects to those associated with MDA and MDMA, the two illegal drugs made from sassafras essential oil containing safrole.

Others suggest using the essential oil from the bark as an antiseptic, lice treatment and insect bite remedy. (36)

In the United States, sassafras trees have been grown since 1630 for the medicinal benefits of its leaves, bark and wood. The soft but durable nature of the bark makes it a good candidate for boat construction, according to the USDA. (37)

As I pointed out, the sassafras tree has been used to create both the sassafras drug and ecstasy for illegal drug use. (38) The DEA has made it illegal for anyone to possess or distribute safrole if there is any indication it may be used illegally.

The sassafras drug (as well as ecstasy or “Molly”) has been implicated in various overdose deaths and is considered a very addictive substance. (39)

Read Next: The Opioid Epidemic: the No. 1 Cause of Death for Americans Under Age 50