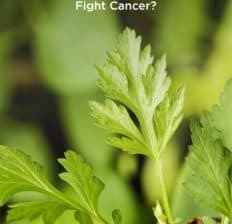 Artemisinin, a major active command in the Artemisia annua plant species, is one of the most commonly prescribed therapy in traditional Chinese medicine.

It was first developed as a drug to treat malaria and has since become the standard treatment for the disease worldwide. Today, researchers are exploring its use as an alternative therapy for cancer treatments.

Because it reacts with iron-rich cancer cells to produce free radicals, artemisinin works to attack specific cancer cells, while leaving normal cells unharmed. Although more research on the therapeutic is needed, the reports to date are promising.

Artemisinin is a drug derived from Artemisia annua, an Asian plant also known as:

A. annua is grown in Asia, India, Central and Eastern Europe, as well as in temperate regions of America, Australia, Africa and tropical regions.

Artemisinin is the active constituent of A. annua, and it’s used as a drug to treat malaria and has been researched for its efficacy against other conditions, including osteoarthritis, Chagas disease and cancer.

Research on artemisinin for cancer suggests that the constituent may work as an alternative therapy, but more clinical studies are still needed. What’s known so far is that artemisinin may help create cancer-killing free radicals in the body.

It works similarly to fight cancer to how it fights malaria, by reacting with iron-rich cancer cells to produce free radicals that go on the attack. Some research even indicates that artemisinin is much more specific in targeting and killing certain cancer cells than other cancer treatments, which means that normal cells can survive with this method.

Artemisinin derivatives, such as dimers, trimers and hybrids, are currently being researched and used as a potential therapeutic alternative to current chemotherapies to combat cancers such as leukemia.

Recent studies show that its derivatives possess both in-vitro and in-vivo activities against various types of cancer. Its anti-cancer effects come from its ability to initiate apoptotic cell death, inhibit cancer proliferation, reduce metastatic growth and promote the formulation of new blood vessels.

Research published in 2021 notes that artemisinin has shown therapeutic activity against leukemia, multiple myeloma and lymphoma cells. Artemisinin drugs have also exhibited good tolerance and few side effects when used in combination with standard chemotherapies.

The “synergism” of flavonoids and artemisinin in cancer treatment has also been reported. Flavonoids have been shown to enhance the anti-cancer effects of artemisinins by increasing their bioavailability and half life values.

These benefits have been reported in several cancer cell models, including on pancreatic, breast, colon and prostate cancers.

In addition to the plant extract’s potential benefits for cancer treatment, it’s been used for thousands of years for other health conditions, including the following:

Artemisinin has proven to exert antimalarial effects, which are due to its free radical scavenging properties. The herbal drug reacts with the high levels of iron in the parasite and produces free radicals, which destroys the cell walls of the malaria.

It has even proven to be effective against highly drug-resistant strains of the disease.

The use of artemisinin against inflammatory-driver respiratory disorders has been investigated, and reports show that they attenuate inflammation by regulating pro-inflammatory cytokines.

3. Has Antimicrobial and Antiviral Effects

There’s also recent research suggesting that A. annua extracts inhibit viral infections and can serve as a cost-effective therapeutic for fighting viruses.

Although more research is needed, there are reports indicating that artemisinin may have the following benefits as well:

Research suggests that artemisinin is generally well-tolerated, but some people may experience side effects, including:

Women who are pregnant or breastfeeding should not use sweet wormwood unless doing so under the care of a health care provider.

Artemisinin supplements are available in many forms and can be used orally, intravenously or rectally. The sweet wormwood plant is also used to make teas, juices and extracts, which is used traditionally to treat malaria and reduce inflammation.

The People’s Republic of China lists the daily dose of Artemisia annua for fever and malaria as 4.5 to nine grams of dried herb prepared as an infusion. This is the preparation that’s been used for clinical trials.

For readymade supplements, doses vary depending on what it’s being used for.

A specific dosage for optimal efficacy has not yet been established, but taking 400–800 milligrams daily is often recommended for reducing inflammation, fighting fever and malaria, and combating infections. This dose range has shown to be safe for six to 12 months, with no apparent artemisinin side effects.