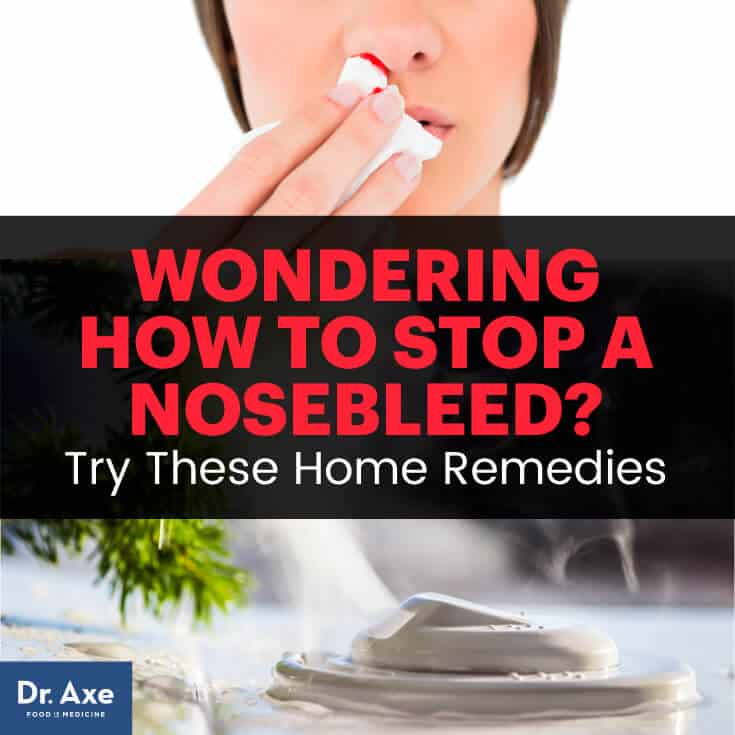 Have you ever experienced epistaxes? If you have, then you’ll be happy to learn about how to stop a nosebleed. Pronounced ep-ih-STAK-seez, epistaxes is another name for the common health problem of nosebleeds. What is a nosebleed? It’s when you have bleeding coming from the inside of your nose. Most of the time, blood only comes out of one nostril, but sometimes it will come out of both. If you live in the in the northeastern United States, nosebleeds are especially common due to the dry climate. (1)

The nose’s job is to warm and humidify the air that we breathe in. Most of the time we don’t even think about the function of our nose unless we’re really stuffed up from a cold, sneezing from allergies or suddenly have blood dripping out of our nostrils. A nosebleed can definitely be disturbing, especially when you haven’t had one before. A nosebleed can definitely come out of nowhere and leave us wondering what on earth brought that on?

What Is a Nosebleed?

In general, a nosebleed is defined as an attack of bleeding from the nose. (2) Our noses have a lining inside that houses a lot of tiny blood vessels. These blood vessels are close to the surface of the lining, which makes it easy for damage to occur. When damage occurs to this lining for some reason, you can experience bleeding from your nostrils, otherwise known as a nosebleed.

The two most common causes of nosebleeds are said to be dry air and nose picking. (4)

Some of the most common causes of nosebleeds: (5)

Less common causes of nosebleeds, which are also nosebleed risk factors, include: (6)

So how do you stop a nosebleed? There is actually some overlap between conventional and natural treatment of nosebleeds. If you have an anterior nosebleed, then home treatment is typically enough. However, if you can’t get the nosebleed to stop, you have a posterior nosebleed or you have a foreign object stuck inside of your nose, then medical intervention is necessary

Over-the-counter decongestant nasal sprays are a common conventional treatment of nosebleeds. If you see a doctor for a nosebleed, he or she may use cauterization to make it stop. Cauterization is when a doctor uses silver nitrate or a heating tool to burn the blood vessels to make the bleeding stop. Another approach your doctor may take is to pack your nostrils with cotton gauze to put pressure on the blood vessels in order to curb the bleeding. (8)

4 Natural Remedies to Stop a Nosebleed

If you’re wondering how to stop nosebleeds naturally, these natural remedies can help you stop a common anterior nosebleed fast. These are some of the best and easiest ways stop a nosebleed at home.

Want to know how to stop a nosebleed? Keep breathing and try not to freak out. Sudden bleeding can be very alarming to any person of any age. Having blood suddenly coming out of your nostrils and onto the front of your clothes can be particularly unnerving. If you’re experiencing a nosebleed personally, remain calm and remind yourself that most of the time a nosebleed is not serious and it will likely stop very soon. If you’re with someone who is experiencing a nosebleed, the very first and best thing you can do for that person is make sure he or she stays relaxed. Getting worked up about a nosebleed can actually make the bleeding even worse. So doctor’s orders: do your best to keep your cool. (9)

Remedy one is a crucial aspect of stopping nosebleeds, but unfortunately staying relaxed doesn’t typically make the bleeding stop.  If you’re wondering how to stop a nosebleed fast, both conventional and holistic health wisdom agree on this next primary remedy.

When you’re suddenly experiencing a common nosebleed, you should sit down, but don’t lie down. While sitting, lean your body forward just a bit to help keep the blood from going down your throat. I know it’s not pleasant having it come out of your nose, but that’s preferable to having it go down your throat, which can end up bothering your stomach.

Now that you’re sitting and leaning forward slightly, squeeze the soft middle area of your nose using your index finger and thumb to close your nostrils. Continue to pinch this area for no less than five minutes, ideally ten to fifteen. If you release and blood is still coming out, repeat. Remember to breathe calmly through an open mouth while pinching your nostrils shut. (10)

Both conventional and natural remedies will recommend cold compresses when it comes to how to stop a nosebleed self-care. To help constrict the tiny blood vessels in your nose that are bleeding, you can hold a cold compress against your nose for a few minutes. The coldness of the compress will encourage the nose’s interior blood vessels to narrow, which should help to stop the bleeding. It can also help to apply an ice pack to the back of your neck briefly. (11)

When people are trying to guess at how to stop a nosebleed, one of the first answers is usually to just stuff the nostrils with something. It’s perfectly fine and expected that you use a tissue, paper towel or cloth to catch the blood coming out of your nose. However, as much as it seems like the obvious thing to do, avoid sticking anything into your nostrils. Why? According to experts, packing the nostrils with tissue or cotton can remove the top layer of the nose lining, making it bleed even more easily. (12)

Once you manage to stop your nose from bleeding, avoid blowing your nose or bending over for a while since these actions can restart the bleeding. In general, try to keep your head higher than your heart. You should also avoid any heavy lifting or straining after experiencing a nosebleed.

Now that we went over some easy ways to stop a nosebleed, let’s talk about preventing them in the first place! There are some very easy and cost effective ways to reduce the likelihood of you or a loved one experiencing a nosebleed.

Here are some of the top ways that conventional and holistic medicine agree can help to prevent nosebleeds before they even start: (13)

Thankfully most nosebleeds will stop on their own with simple home care. However, there are times when you should make sure you seek immediate medical attention including: (15)

Nosebleeds aren’t pretty. In fact, they can often make someone look like they just stepped out of a scary movie. As bad as it looks, try not to let a nosebleed cause you or someone you know to panic because that only makes the bleeding worse. Remain calm and follow these simple suggestions for how to stop a nosebleed at home. Of course, if bleeding is excessive or doesn’t stop with home treatment, then always seek immediate medical attention.