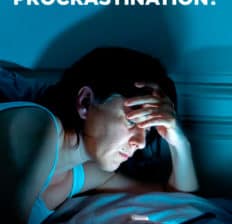 If you’re someone who has a busy schedule and/or a high-stress job and you struggle to fall asleep at a decent time most nights, you may be dealing with something called “revenge bedtime procrastination” (RBP).

RBP is a bit different than insomnia, in which people can’t sleep even though they are trying to, because it’s more intentional. People dealing with RBP could probably stick to healthier sleep schedules if they prioritized them more, however other desires besides sleeping are considered more important.

Is revenge sleep procrastination real? Research suggests that it’s both real in terms of its negative health impacts and also fairly common.

Unfortunately, because it’s associated with sleep deprivation, it can lead to issues like daytime fatigue, brain fog, low motivation and even weakened immune function.

What Is Revenge Bedtime Procrastination?

The Sleep Foundation defines revenge bedtime procrastination as “the decision to sacrifice sleep for leisure time that is driven by a daily schedule lacking in free time.”

In other words, it occurs when people stay up late at night to do things they enjoy, such as scrolling the internet or watching TV, because they feel like they lack the freedom to do these things during the daytime.

The revenge aspect of RBP explains how someone has the desire for retribution and retaliation by doing something spiteful after they’ve been wronged. In this case, people engage in RBP because they feel like they deserve to after their day has been spent on things they didn’t enjoy doing, typically work or schoolwork.

This explains why RBP is also called “retaliatory staying up late.”

What is the Chinese word for revenge bedtime procrastination? Supposedly the term “revenge bedtime procrastination” is a spin-off of a Chinese expression “bàofùxìng áoyè” that describes frustration tied to long, stressful work hours that leave little time for personal enjoyment. Bàofùxìng áoyè first gained attention via social media and then was translated into other languages, including English.

How do you know if you’re engaging in RBP? Ask yourself these questions:

What puts someone at risk for engaging in revenge bedtime procrastination?

A lack of sleep is tied to many different physical and mental health problems. When revenge bedtime procrastination leads to too little sleep, it can cause negative effects on your well-being, such as:

How to Get Better Sleep

How do you beat revenge on bedtime procrastination? Below are tips for getting better rest, including how to utilize natural sleep aids, such as relaxation exercises:

1. Focus on the Positives of Getting Enough Sleep

RBP is really a decision to delay sleep in response to chronic stress or a lack of free time. This means that to end it you need to make the decision to prioritize sleep instead.

One way to do this is to become more aware of the benefits of sleeping well and having more energy during the day. Pay attention to your mood, energy and productivity when you’re well-rested.

Journaling about how you’re feeling and practicing mindfulness and meditation can help you do this since they increase self-awareness.

2. Create a Sleep Schedule and Stick to It

The importance of practicing good “sleep hygiene” can’t be overstated. This involves both establishing good sleep habits and setting up an environment conducive to getting quality sleep.

RBP is thought to be associated with a lack of self-regulation and self-control, so the best thing to do is create sleep habits that feel automatic and don’t require lots of effort. Self-control is usually at its lowest at the end of the day, so having a regular sleep routine and schedule that you try to follow as often as possible can save you from missing sleep.

Here are some suggestions for doing this:

3. Find Ways to Handle Stress Better and Relax More During the Day

Some experts believe that RBP is really rooted in “an attempt to find recovery time in response to stress.” This means that finding ways to make your day feel less stressful and burdensome is one of the most effective strategies for handling RBP.

If you lack work-life balance and typically work extended working hours that cut into normal leisure time, consider talking to your supervisor/boss about potential changes that can be made. Perhaps you can work from home one to two days per week, shorten the amount of time that you need to be online and available, or delegate some of your responsibilities. These can help you draw boundaries between work and home.

While this isn’t always possible, anything you can do make your day feel calmer and more enjoyable, even if it means sneaking in exercise or walk during your break, can help you generally keep stress under control.