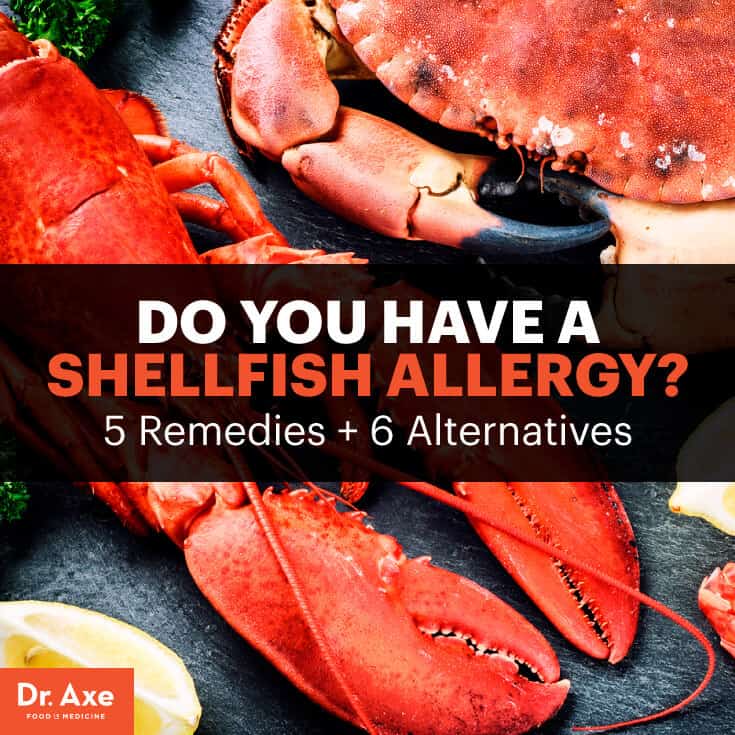 It’s true that with food allergies, one person’s food can truly be another one’s poison. The popularity of shellfish has been increasing worldwide, but consequently, shellfish constitute the No. 1 cause of food allergies in the American adult. The approximate prevalence of shellfish allergy is estimated at 0.5 to 2.5 percent of the general population. (1)

Shellfish allergy can be life-threatening, so it’s important that people are educated about shellfish allergy symptoms, the less obvious foods that may contain shellfish and natural remedies that can help to reduce the body’s immune response.

“Shellfish” and “seafood” are often used interchangeably and with different meanings. According to research published in Clinical and Translational Allergy, “seafood” is a general term that refers to any edible aquatic animal, whereas “shellfish” refers to those with a shell or shell-like exoskeleton. (2)

There are several known groups and sub-groups of shellfish species. One type of shellfish is crustaceans, which in Latin means “having a crust or shell.” Crustaceans belong to the arthropoda category, which all have hard exoskeletons or shells, segmented bodies and jointed limbs. There are over 50,000 known species of crustaceans; some more well known crustaceans include crabs, lobsters, crayfish, shrimp, krill, prawns, woodlice and barnacles.

The mollusca is the largest marine phylum, comprising of about 23 percent of all the named marine organisms. Cephalopod molluscs, such as squid, cuttlefish and octopus, are among the most neurologically advanced mollusca; giant squid are the largest, and gastropods like snails and slugs are by far the most numerous, making up 80 percent of all mollusca. Other molluscs include scallops, clams, mussels and oysters. (3)

Related: What Is a Sea Cucumber & Can You Eat It?

What Exactly Is a Shellfish Allergy?

Shellfish is one of the leading causes of food allergies in adults and is a common cause of food-induced anaphylaxis. In the U.S., a survey involving 14,948 individuals revealed that 2 to 3 percent of people believe to have a seafood allergy: 2.2 percent to shellfish and 0.6 percent to fish. From highest to lowest prevalence, shellfish allergy is most common in shrimp, crab, lobster, clam, oyster and mussels. (4)

The growing international trade of seafood has added to the popularity of frequency of consumption of a variety of seafood products across the country. This increased production and consumption has been accompanied by more frequent reports of adverse health problems among consumers and processors of seafood. Research shows that adverse reactions to seafood are often generated by contaminants, but can also be mediated by the immune system and cause allergies. (5)

Related: Does Chitosan Work for Weight Loss or Is It All Hype?

The Most Common Shellfish Allergy Symptoms

Shellfish allergy symptoms are mediated by antibodies that are produced by the immune system against specific allergens. Antibodies trigger the release of chemicals (such as histamines) to attack the protein that’s causing the immune response. Non-immunological reactions to seafood can be triggered by contaminants such as parasites, bacteria, viruses, marine toxins and biogenic amines. Ingredients added during processing and canning of seafood can also cause adverse reactions. All of these substances are able to trigger reactions that are similar to true shellfish allergy symptoms. (6)

When an over-release of chemicals puts a person into shock, this is called an anaphylactic reaction. Anaphylaxis can occur suddenly and progress quickly. The early signs of anaphylaxis may be mild, such as a skin rash or a “strange feeling,” but this can lead to more serious issues such as trouble breathing, hives or swelling, tightness of the throat, nausea, vomiting, abdominal pain, dizziness and fainting, a drop in blood pressure, rapid heart beat and even cardiac arrest. People who have had a severe allergic reaction to shellfish are at a greater risk for future reactions, and they should carry a self-injectable epinephrine. (7)

Related: Imitation Crab Meat May Be Even Worse Than You Think

The management of a shellfish allergy is strict elimination of shellfish, which in highly allergic people may include avoidance of touching or smelling it, too. Researchers suggest that any person who has experienced an adverse reaction to shellfish in the past should wear a Medic Alert identification and be trained in using an epinephrine auto-injector because future reactions may be more severe. (9)

Like with a peanut allergy, there are ways to boost your immune system and lessen the severity of shellfish allergy symptoms with natural remedies.

Probiotic supplements boost immune function and reduce the risk of developing food allergies. Research shows that the presence of probiotic bacteria in the intestinal microbiota is found to correlate with protection against allergic diseases. Clinical improvement, especially in allergic rhinitis and immunoglobulin-sensitized eczema, has been reported in most of the published studies involving probiotics and allergies. (10)

Research suggests that MSM supplements may be effective in reducing allergy symptoms. MSM is an organic sulfur-containing compound that is used to improve immune function, lower inflammation and help restore healthy bodily tissue. It can be used to relieve gastrointestinal issues and skin conditions that are associated with less severe shellfish allergy symptoms. (11)

Vitamin B5 (or pantothenic acid) may be beneficial for people with allergies and asthma because it supports adrenal function. It is important in controlling nasal congestion, maintaining a healthy digestive tract and boosting immune function. (12)

L-glutamine is the most abundant amino acid in the bloodstream, and it can help to repair leaky gut and boost immune health, which can be helpful when suffering from food allergies. Research indicates that leaky gut, or intestinal permeability, is likely to cause various pathologies, including allergies. Compounds such as glutamine have the mechanistic potential to inhibit inflammation and oxidative stress. (13)

The only way to truly avoid an allergic reaction to shellfish is to avoid eating and coming into contact with shellfish altogether. And be aware that there may be traces of shellfish in products that seem harmless, including some Caesar salad dressings, soaps and cosmetics, sauces (like Worcestershire sauce) and seasonings, vitamins and insecticides.

In a 2007 retrospective study that took place over a five-year period, a total of 530 food reactions were reviewed. Researchers found that 119 reactions (22.4 percent) were considered to be due to hidden allergens and 32 percent of these were anaphylactic reactions. Fish allergens hidden in those foods caused reactions in 35 percent of fish-allergic patients. (14) This proves that people with a shellfish allergy must be vigilant and choose food alternatives that they know to be safe.

Protein, which is used in every single cell of our body, is critical for building muscle mass, supporting neurological function, balancing hormones, aiding digestion and boosting our mood. Protein foods are used to develop, grow and maintain just about every part of the body. If you aren’t able to get your daily dose of protein from shellfish due to an allergy, there are plenty of other options on the table.

Many shellfish also provide a good amount of iron, such as oysters, scallops and clams. (15) Iron plays a critical role in the body and iron-rich foods provide us with energy, boost muscle and brain function, and support a healthy pregnancy.

That being said, bear in mind that shrimp nutrition is not as impressive when you look at farmed shrimp (which is roughly 90 percent of shrimp on offer). Farmed shrimp has a raft of problems, including containing chemicals (some banned!), pesticides and even xenoestrogens.

A three-ounce portion of grass-fed beef provides 10 percent of your daily allowance of iron and about 60 grams of protein! Beef is also loaded with potassium, B vitamins and magnesium. If you can’t eat shellfish due to an allergy, eating a small portion of beef steak (about the size of your palm) is an excellent way to make sure you’re getting enough nutrients in your diet.

Organic chicken serves as another lean source of protein and just like shellfish, it’s versatile and can be added to many meals. A 2015 study published in Food and Nutrition Research found that consumption of poultry meat, as part of a vegetable-rich diet, is associated with a risk reduction of developing overweight and obesity, cardiovascular diseases and type 2 diabetes mellitus. Also, the collagen in chicken contains chondroitin and glucosamine, two compounds that help rebuild cartilage. (16)

Beans, such as navy beans and black beans, are a great alternative for shellfish because they are high in protein and iron, plus a number of important micronutrients, including potassium, magnesium, folate and zinc. Beans are filling and, like shellfish, they can be added to stews, soups, salads and many other meals. (17)

Lentils are a favorite among vegetarians and vegans because they are a high-protein food that are rich in nutrients. A 2009 study published in the Journal of the American Dietetic Association suggests that consumptions of lentils (and dry beans and peas) can improve diet quality in the U.S. population. Lentils have an array of nutrients and phytonutrients that have been shown to have beneficial health effects, yet consumption levels in the United States are quite low. (18) For people who can’t eat shellfish due to a food allergy, lentils can serve as a great source of protein and other important nutrients, such as folate, manganese, phosphorus, thiamine, potassium, zinc and more.

Eggs are sources of protein, fats and micronutrients that play an important role in basic nutrition. They are easy to cook and provide important nutrients like selenium, riboflavin, vitamin D, vitamin B12 and phosphorus. There are a number of health benefits of eggs, including their ability to improve eye health, prevent metabolic syndrome, reduce heart disease because of the omega-3 fatty acids, aid weight loss, maintain brain health and improve your skin. (19)

Chicken liver, or even beef and duck liver, is very high in nutrients and can be considered a superfood. It is a rich source of B vitamins, iron and vitamin A. It also provides important minerals like phosphorus and magnesium. (20) It actually outperforms many other health foods like spinach, carrots and apples. If you are trying to get the nutrients you are missing from shellfish somewhere else — look no further. You are getting the protein and iron from shellfish, and much more.

Read Next: 17 Fish You Should Never Eat + Safer Seafood Options