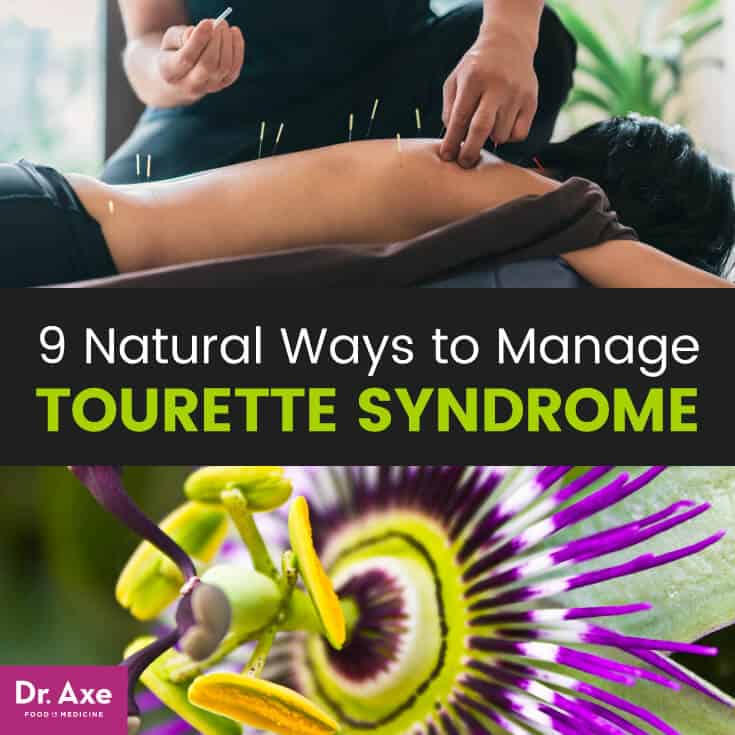 For example, the CDC estimates that 1 in 160 children between the ages of 5 and 17 have Tourette Syndrome, with nearly half of the children in the United States remaining undiagnosed. And while symptoms can improve through maturity, many adults continue to face the symptoms of this often life-disrupting disease.

Marked by involuntary and repetitive movements and vocalizations, this Tic Disorder typically first appears in young children 5-7 years of age, with the most severe period around the age of 10. (1) From mild to severe, the symptoms of Tourette’s can be debilitating.

One of the challenges in finding an effective treatment for Tourette’s is the fact that 86% of children have co-occurring conditions including ADHD, anxiety, depression, autism spectrum disorder and behavioral problems, with more than one-third of all people with Tourette Syndrome also having obsessive-compulsive disorder. (2)

While there is currently no cure, there is power in learning to manage the symptoms and the symptoms of the co-occurring conditions.

What Is Tourette Syndrome?

Tourette Syndrome is a neurodevelopmental condition that causes involuntary motor tics and vocal tics. While some people will continue to experience the symptoms of Tourette’s throughout their life, many people will see improvements in the severity and frequency of tics during their late teens and early adulthood.

There are two classifications for tics — simple and complex. Simple tics are brief, sudden and repetitive, that use a limited number of muscle groups. Examples of this classification include eye blinking, shoulder shrugging, throat clearing, sniffling or grunting.

On the other hand, complex tics involve several muscle groups and may present as a combination of simple tics. These complex tics may result in tic strings of throat clearing and shoulder shrugging, or sniffing and repetitive touching of an object. Self-harming tics are classified as complex tics and may manifest as punching or slapping oneself or uttering swear words.

While movies and television would lead you to believe that swearing is common in those with Tourette’s — coprolalia, as it’s known — it only affects 10% to 15% of patients.

Some experts believe that before the manifestation of a tic, individuals may experience an intense sensation or urge in the muscle group that is about to react.  In fact, one of the keys to managing Tourette symptoms is learning to identify this sensation. Learning how to do this can be an effective method as teens become more aware of their condition.

Tourette’s Syndrome is not considered rare. While it occurs in both sexes, rates are 3 to 4 times higher in boys than girls. (3) Researchers believe that both genetics and environmental factors contribute to Tic Disorders; however, there is no clear path to prevention. 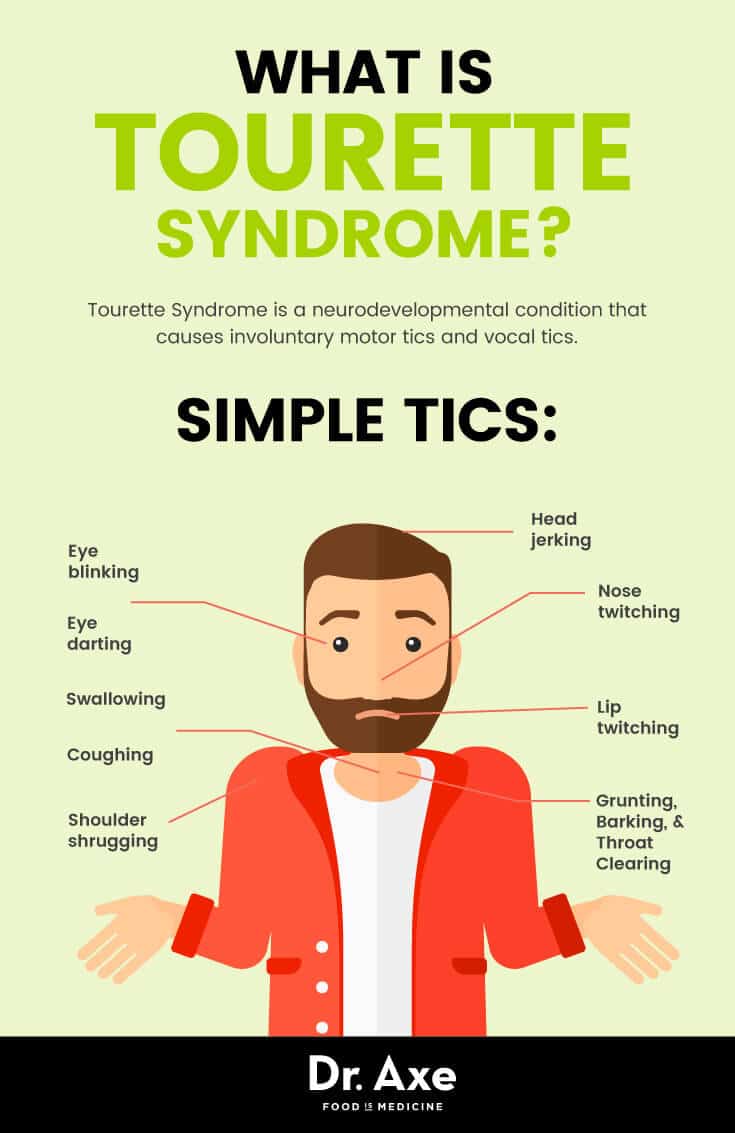 As mentioned above, tics, both verbal and physical, are the hallmark of Tourette’s. Because of the extremely high rate of co-occurring conditions, not every individual will necessarily display all symptoms; Tourette’s is a condition in which symptoms vary widely from person to person and age to age.

No direct cause has been determined for Tourette Syndrome, but it’s believed to be a combination of genetics and environmental facts. Some preliminary theories indicate that dopamine and serotonin levels may be different in those with a Tic Disorder.

Children are at a greater risk if there is a family history of Tourette’s, and as mentioned above, males are significantly more likely to develop it than their female peers.

The Henry Spink Foundation, a nonprofit organization serving families of children diagnosed with a variety of disabilities indicates that there are some allergies that can mimic the symptoms of TS; however, the supporting research is limited. (4)

In 1996, The Association for Comprehensive NeuroTherapy conducted a small sampling survey of people with Tourette’s asking “Have you ever suspected that something, aside from stress, triggered or aggravated TS symptoms?” Respondents mentioned chocolate, sodas, perfume, pollen, caffeine, artificial colors, artificial sweeteners, artificial flavors, preservatives, MSG, wheat and peanuts as possible offenders.

There is no definitive test for Tourette Syndrome; diagnosis is based on the signs and symptoms of tics. Your doctor may order allergy tests, blood tests and MRIs to rule out other conditions before making a definitive diagnosis.

Unfortunately, there is no single cure for Tourette Syndrome; doctors prescribe conventional medications to help control tics. As this disorder presents in different ways for different people, finding the right combination of prescription drugs takes time. Many of the commonly prescribed medications cause significant side effects (5), and the ADHD medications may exacerbate the tics. (6)

In addition to prescribed medications cognitive behavioral interventions, habit reversal training, and psychotherapy are often recommended. A rather controversial treatment, Deep Brain Stimulation (“DBS”), requires surgical implantation of electrodes in the brain. The electrodes then produce impulses that attempt to regulate the abnormal impulses in the brain causing Tourette symptoms.

While researchers believe that DBS is safe and feasible for treating TS, further trials are needed. However, only adults should be considered candidates. (16) 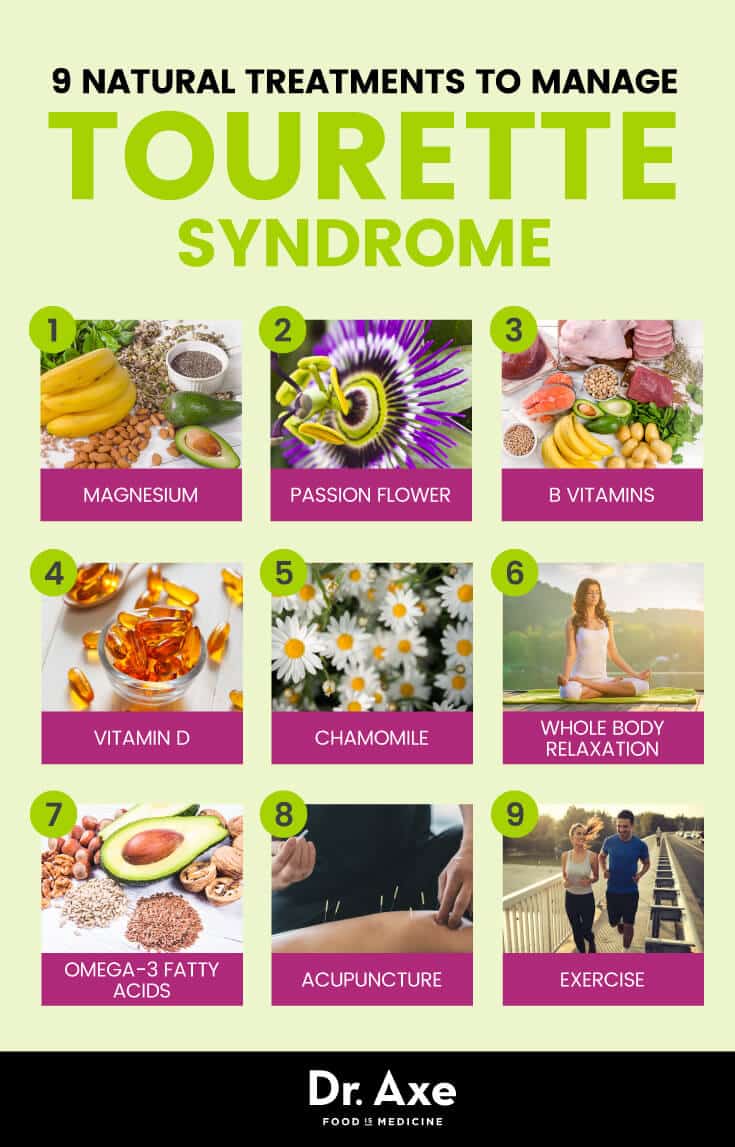 Magnesium supports the central nervous system, promoting proper muscle action and reaction. In 2008, researchers in Spain found that oral solutions of magnesium and vitamin B6 decreased total tic scores in children with Tourette Syndrome. Researchers did not see any side effects and the treatment was deemed safe and effective. Further studies are needed. (17)

In addition to the evidence of helping reduce the tics association with Tourette’s, those with a magnesium deficiency can suffer from anxiety, depression, and chronic fatigue, many of the same co-occurring conditions that affect those with Tic Disorders. Try incorporating more magnesium rich foods and brain boosting foods into your diet, such as avocados, bone broth and dark chocolate.

In a double-blind, randomized controlled trial that pitted Passiflora extract vs. Oxazepam, researchers found that Passiflora extract is effective for the management of anxiety, and has a low incidence of impairment of performance when compared to oxazepam. (18)

Individuals with Tourette’s  often have trouble sleeping, anxiety and depression, and often have co-occurring ADHD. Passion Flower is known to help with these conditions. There are teas and supplements available; follow recommended dosing for best results.

The B vitamins support the nervous system, promote healthy skin and hair, combat stress and depression, fight free radicals, boosts HDL cholesterol, regulate mood and sleep, and reduce inflammation. As stress is a common trigger for Tourette’s, it is important to support the body’s ability to fight stress.

Vitamin B12, in particularly, can support those with Tourette’s by fighting depression and anxiety and improving concentration and cognitive function. For best results, be sure to follow the National Institutes of Health recommended dosing. (19)

It’s believed that nearly 90% of the population has a vitamin D deficiency. Often overlooked as an essential nutrient, vitamin D plays a critical role in the nervous system, muscle health and depression. In fact, researchers from the Department of Psychiatry and Behavioral Neurosciences at St. Joseph’s Hospital in Ontario, Canada found that there is a strong relationship between vitamin D and depression. (20)

The single best way to get the vitamin D you need is through sunlight; during the winter months, or if you don’t get outside for at least 20 minutes each day, it is important to boost your intake of vitamin D rich foods.

For over 5,000 years, chamomile has been used for insomnia, wounds, allergies, arthritis, to fight anxiety and depression and for muscle spasms. As a matter of fact, a randomized, double-blind, placebo-controlled trial published in the Journal of Clinical Psychopharmacology found that chamomile reduced anxiety in patients with mild to moderate generalized anxiety disorder. (21)

Luckily, organic chamomile teas, tinctures and essential oils are readily available at health food stores, which makes it easy to incorporate it into your daily routine. To help relieve tension and promote sleep, try diffusing chamomile essential oil. You can also enjoy a cup of tea (or iced tea) any time of the day to gain the benefits from this powerful flower.

A study published in the Journal of Affective Disorders found that body-mind relaxation meditations can help modulate brain activity in multiple areas where emotion processing is found. (22)

To induce a whole-body relaxation response, guide your child through tensing and releasing various muscle groups. Starting at the feet, and moving upwards, squeeze muscles hard to the count of 5, and then release to the count of 15. Then, go to the next muscle group, and repeat until you reach the top of the head. Some individuals with Tourette’s may find that tensing and releasing the lower body is enough. However, others may find the same to be true with the upper body.

Long acknowledged for supporting heart health, brain health, and cancer prevention, foods naturally high in Omega 3 Fatty Acids should be incorporated into the diet of anyone suffering from TS.

In a small study, Chinese researchers found acupuncture to have an effective rate of 97.1% in the treatment of Tourette’s Syndrome. (24) Their conclusion was that acupuncture is a “very effective therapy for TS.” While parents and children alike may hesitate to try acupuncture, it is a safe procedure that is proven to help with insomnia, pain, stress and now Tourette’s.

Miss Arizona 2013, Jennifer Smestad, a Tourette’s sufferer, used acupuncture to control symptoms including both physical and verbal tics. (25) Her story published in Acupuncture Today is a must-read for the parents of Tourette patients.

Aerobic exercise has been shown to significantly reduce tics during exercise and post-exercise. The study published in Behavior Modification Journal found that in addition to tic reduction, aerobic exercise also had a beneficial impact on anxiety and mood levels. (26)

While the study did not identify the intensity or length of time for the exercise sessions observed, incorporate regular aerobic activity daily for best results. Try to find ways to make exercise fun. Dance, tennis, basketball, playing tag can all get the heart pumping, resulting in healthier and happier kids.

Tourette Syndrome is a challenging disorder for both the family and the child who has been diagnosed. Depending on the severity and frequency of tics, significant behavioral and social challenges are likely.

Children and teens with Tourette Syndrome often suffer from poor self-image, loneliness and isolation. Also, with so many serious co-occurring disorders, including ADHD, OCD, depression, anxiety, anger and autism-spectrum disorders, effective treatment must focus on overall wellness and support.

Read Next: Biofeedback Therapy: A Proven Treatment for 16+ Medical Conditions