If you haven’t stopped using artificial sweeteners, please do so immediately! Artificial sweeteners, or non-nutritive sweeteners as they are sometimes referred to, have been controversial since they were first introduced to the market in the 1950s, and scientific research shows they are associated with many dangerous side effects.

Introduced to satisfy consumers’ sweet tooth, these artificial sweeteners with no calories seemed, at the time, like good alternatives to refined sugars and natural sweeteners and ideally suited to low-carb diets (some on Paleo, Atkins or the keto diet plan still use these artificial sweeteners). However, the side effects simply aren’t worth it. These fake sweeteners cause symptoms that range from headaches and migraines to weight gain and even more serious conditions like cardiovascular disease. (1)

What many people don’t realize is that artificial sweeteners also can cause a dangerous addiction — an addiction to overly sweet foods. They retrain the taste buds to need more and more, sweeter and sweeter foods. This leads to even greater incidences of obesity, type 2 diabetes, kidney damage and so much more.

So how does the use of artificial sweeteners contribute to addiction? Researchers believe that part of the reason is that individuals will just find other foods to fill the calorie gap in order to become satiated. We’ve all seen people order diet sodas, only to then order one of the most calorie-ridden items on a menu. That’s because non-nutritive sweeteners provide virtually no sense of satisfaction. (2)

Holly Strawbridge, former editor of Harvard Health, points out that while FDA studies have “ruled out cancer risk” for non-nutritive sweeteners, all of the studies conducted were based on significantly smaller doses than the 24 ounces a day average of diet soda. (4) As portion sizes continue to grow out of control with 30-ounce, 40-ounce and even 50-ounce fountain sodas, it’s vital to recognize that these portions have not been evaluated for their safety.

In addition, another study on the effects of artificial sweeteners on atherosclerosis found that daily consumption of drinks with artificial sweeteners creates a 35 percent greater risk of metabolic syndrome and a 67 percent increased risk for type 2 diabetes. (5) Atherosclerosis is when plaque builds up inside the arteries leading to strokes, heart attacks and even death. (6)

There is additional evidence that links artificial sweeteners to the development of glucose intolerance and other metabolic conditions that result in higher than normal blood glucose levels. (7) According to a study published in Trends in Endocrinology and Metabolism, frequent consumption of sweet-tasting, non-caloric foods interferes with metabolic function.

A 2018 study published in Inflammatory Bowel Diseases also revealed that the artificial sugar, sucralose (otherwise known as Splenda) and maltodextrin, intensifies gut inflammation in mice that carry Crohn’s-like diseases. Specifically, the artificial sweetener increases the number of Proteobacteria — a microbe bacteria associated with E. coli, Salmonella and Legionellales — in the mice who carried a Chrohn’s-like disease.

Additionally, the ingestion of artificial sugar intensified myeloperoxidase (an enzyme in white blood cells) activity in individuals that have a form of inflammatory bowel disease. This study indicates that it may be practical to track Proteobacteria and myeloperoxidase in patients to adjust their diet and monitor the disease and gut health. (8)

Related: Is Allulose Safe to Consume? Potential Benefits & Risks of This Sweetener

People are often surprised at how often dangerous artificial sweeteners are included in prepared foods, medications and beverages. Here are a few surprising examples of where to check for the dangerous sweeteners mentioned above.

This isn’t an exhaustive list. Please carefully read the labels of the foods you purchase to ensure you don’t consume these dangerous chemicals. 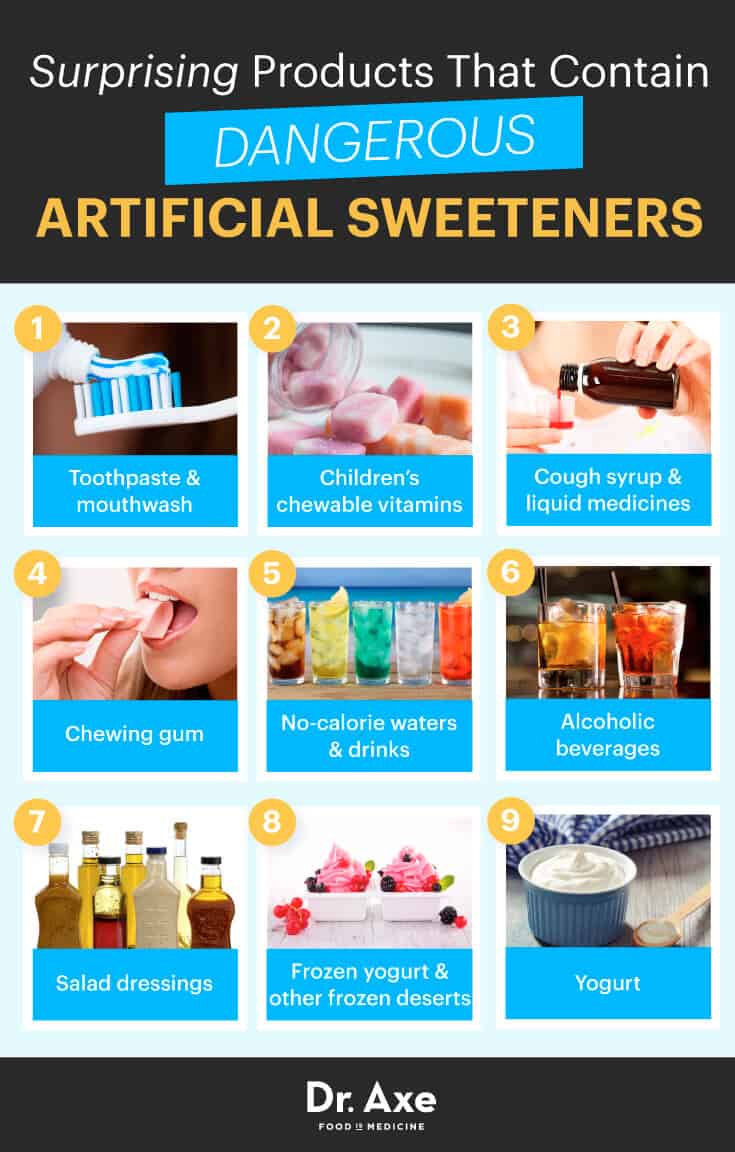 Again, please avoid these artificial sweeteners below. There are plenty of natural, healthy sweeteners available that provide essential nutrients and taste great.

PepsiCo Inc. recently announced it’s reformulating Diet Pepsi, Caffeine Free Diet Pepsi and Wild Cherry Diet Pepsi sold in the United States. It’s removing aspartame from the formula and replacing it with sucralose and Ace-K due to declining sales. According to Senior Vice President Seth Kaufman, “To Diet Pepsi consumers, removing aspartame is their No. 1 concern. We’re listening to consumers. It’s what they want.” (9)

This does not make diet sodas with artificial sweeteners any safer. Sucralose and Ace-K both have dangerous side effects; Pepsi is switching the formula not for the health of its consumers — after all, they are keeping Diet Mountain Dew exactly the same — but because consumers are aware of the dangers of aspartame.

Unfortunately, the general population isn’t as aware of the dangers of sucralose and Ace-K, and PepsiCo believes that this change in formulation will increase sales. Don’t be tricked by marketing ploys; aspartame, sucralose and Ace-K are all bad for your health.

The U.S. Food and Drug Administration approved aspartame nearly 35 years ago. It’s currently used in more than 6,000 consumer foods and drinks, and over 500 prescription drugs and over-the-counter medications. It hides in places we don’t expect! Because aspartame isn’t heat-stable, it’s typically found in drinks and foods that haven’t been heated.

According to a recent study published in the American Journal of Industrial Medicine, “A re-evaluation of the current position of the international regulatory agencies must be considered an urgent matter of public health.” This recommendation is due to the study’s findings that aspartame has carcinogenic effects. (10)

This study found that aspartame may impair memory performance and increase oxidative stress in the brain. In addition, if you are pregnant or nursing, avoid this dangerous artificial sweetener at all costs. A recent study points to alarming news for women who consume artificial sweeteners during pregnancy or while breastfeeding. It appears that aspartame, in particular, can predispose babies to metabolic syndrome disorders, and obesity, later in life. (11)

Common side effects of aspartame include headaches, migraines, mood disorders, dizziness and episodes of mania. Comprising phenylalanine, aspartic acid and methanol, these substances can stay in the liver, kidneys and brain for quite some time.

Sucralose, derived from sugar, was originally introduced as a natural sugar substitute. However, in reality, it’s a chlorinated sucrose derivative. Yes, chlorine, one of the most toxic chemicals on the planet! Sucralose was originally found through the development of a new insecticide compound and wasn’t originally intended to be consumed.

At 600 times sweeter than sugar, it’s easy to see how the use of sucralose, or Splenda (!), can contribute to an addiction for overly sweet foods and drinks. In June 2014, the Center for Science in the Public Interest placed Splenda in its “caution” category, pending a review of a medical study that found it could be linked to leukemia in mice.

A study published in the Journal of Toxicology and Environmental Health found that cooking with sucralose at high temperatures can generate dangerous chloropropanols – a toxic class of compounds. Human and rodent studies demonstrate that sucralose may alter glucose, insulin and glucagon-like peptide 1 levels. Last but not least, it isn’t biologically inert, meaning that it can be metabolized and have a toxic effect on the body. (12)

Composed of a potassium salt that contains methylene chloride, Acesulfame K is routinely found in sugar-free chewing gum, alcoholic beverages, candies and even sweetened yogurts. It’s often used in combination with aspartame and other noncaloric sweeteners.

ACE K has undergone the least amount of scientific scrutiny even though long-term exposure to methylene chloride, a main chemical component, has been shown to cause nausea, mood problems, possibly some types of cancer, impaired liver and kidney function, problems with eyesight, and perhaps even autism. (13)

In addition to sweetening foods, it’s becoming increasingly popular as a “flavor enhancer.” ACE K is heat-stable and routinely found in highly processed foods and baked goods. The human body can’t break it down, and it’s believed to negatively affect the metabolism.

In the 1970s, saccharin and other sulfa-based sweeteners were believed to possibly cause bladder cancer, and it was required to carry the following warning label: “Use of this product may be hazardous to your health. This product contains saccharin, which has been determined to cause cancer in laboratory animals.” (14)

The FDA removed this warning, but many studies continue to link saccharin to serious health conditions. Sadly, it’s the primary sweetener for children’s medications, including chewable aspirin, cough syrup, and other over-the-counter and prescription medications. It’s believed that saccharin contributes to photosensitivity, nausea, digestive upset, tachycardia and some types of cancer. (15)

5. Xylitol (Erythritol, Maltitol, Mannitol, Sorbitol and other sugar alcohols that end in –itol)

Sugar alcohols aren’t absorbed well by the body and cause an allergic reaction for those who have a sensitivity to it. In addition, it has gastrointestinal side effects that include bloating, gas, cramping and diarrhea. Its laxative effect is so pronounced that it’s actually part of the chemical makeup for many over-the-counter laxatives.

Even though these sweeteners have been on the market for decades, pregnant and breastfeeding women should select a natural sweetener instead. WebMD states: “Not enough is known about the use of xylitol during pregnancy and breast feeding. Stay on the safe side and avoid use.” (16)

Special note to dog owners: Sugar alcohol-based artificial sweeteners are a life-threatening toxin to dogs. Be mindful of breath mints, candies, sugar-free gum, frozen desserts and other foods when your pets are around. (17)

So, what are your options when you have a sweet tooth? All natural sweeteners — including maple syrup, coconut sugar, stevia, fruit purees and raw honey — are great, healthy substitutions. Keep packets of stevia with you so you don’t have to resort to artificial sweeteners provided by restaurants and cafes.

Start working to retrain your palette to enjoy the natural sweetness of foods, not added sweeteners. Try adding other flavors like tangy, tart, warm and savory to please your palette. For example, vanilla, cocoa, licorice, nutmeg and cinnamon enhance the flavor of foods, so you need less sweetness.

When you crave a sweet drink, try homemade infused waters or even my Watermelon Agua Fresca. It’s a light, sparkly and refreshing drink packed with nutrients and natural sweeteners. Start sweetening your iced tea with honey, coconut sugar or even maple syrup for a twist.

For a special (and healthful) treat, try my Peppermint Patties sweetened with honey and packed with all the health benefits of coconut oil. Be creative and experiment with new foods, healthy sweeteners and added flavors that keep you satisfied.

America’s obesity epidemic continues to grow, and it coincides with an increase in the widespread use of non-nutritive artificial sweeteners including aspartame, sucralose, saccharin and sugar alcohols.

Research shows that artificial sweeteners don’t satiate you the way real foods do. Instead, you end up feeling less satisfied and more prone to eating and drinking more, resulting in weight gain, in addition to potentially suffering dangerous side effects associated with artificial sweeteners. (18)

While I truly believe that everyone should avoid artificial sweeteners, it’s particularly important for children and women who are pregnant or breastfeeding to refrain from these sweeteners. The risk is simply too great.