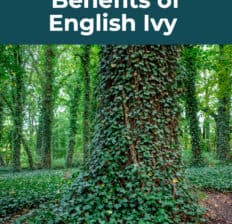 Here’s a little known fact about a vine you’ve probably across many times, called English ivy: Not only is it an appealing ornamental plant — because it can climb up walls and stays green all green round— but it offers a number of health benefits when used medicinally as a healing herb. This is due to its supply of antioxidants and anti-inflammatory compounds, especially polyphenols.

English ivy also has purifying effects that can help keep the air in your home clean by removing mold spores and volatile organic compounds, such as those released from house paint or cleaning products.

What Is English Ivy?

English ivy (Hedera helix) is an evergreen vine that tends to grow by climbing up other trees and structures.

Hedera helix leaves are used to make herbal treatments and extracts, most often for the purpose of treating inflammatory respiratory symptoms and infections. English ivy remedies (over-the-counter drugs) are used widely in Europe, especially places such as Germany, for treating coughs in both children and adults due to its mucolytic actions.

In fact, according to one report, more than 80% of herbal expectorants prescribed in Germany contain ivy extract, amounting to nearly 2 million prescriptions nationwide per year.

Where does English ivy grow best?

English ivy is native to Europe, including England (hence the name), but now grows in many cool and temperate climates, including many parts of the United States.

This plant prefers somewhat cool, moist, and part-sun or shady areas, such as along cliffs, slopes and outer edges of forests. It stays green all year and tends to grow to three to eight feet or more.

Is Hedera helix fast-growing? It can be, if given the right conditions. This type of ivy can sometimes grow to 90 feet long!

Why is English ivy a problem in some areas? Around forests, English ivy will at times grow rapidly since it “has no natural checks and balances to keep it under control.”

One risk of overgrown ivy is that it can weigh down trees and make them fall. It can also contribute to slope slippage and erosion if water runs down thick patches of ivy.

English ivy comes in many shades of green, as well as silver, white, gold or chartreuse speckled shades. Leaf shapes also depend on the exact species, with some having smaller three-pronged leaves and others have wider or pointy leaves. Some species also produce dark, berry-like fruits.

Some popular types of Hedera helix, some of which can be grown indoors inside your home (see more below for growing tips), include:

When it comes to its medicinal benefits, what is Hedera helix used for? Below are some of the known benefits of English ivy:

1. Has Anti-inflammatory and Antioxidant Effects

According to studies, saponins found within this ivy are considered to have mucolytic, spasmolytic, bronchodilatory and antibacterial effects. This gives the plant the ability to support the immune system in fighting off infections, swelling, shortness of breath, muscle spasms, congestion and other symptoms.

Some animal studies have found that English ivy extract can help lower inflammation by inhibiting release of inflammatory markers, such as interleukin-6.

While more formal research is needed to confirm how well it works, there’s evidence that Hedera helix may help reduce:

Herbal treatments made from English Ivy are often used to treat breathing and respiratory problems, including:

Researchers believe that Hedera helix may help improve breathing because of its ability to boost release of epinephrine, which helps improve air flow in the lungs. It does this by affecting beta2-adrenergic signaling.

It also stimulates mucus glands and has expectorant properties that thins mucus — plus it decreases inflammation, which can contribute to worsened lung function and sensitive airways.

Studies investigating the effectiveness of English ivy on respiratory symptoms have shown conflicting results, however.

A 2021 review found this extract only had minimal effects on upper respiratory tract infection symptoms, but it was shown to be safe and unlikely to cause side effects like some other cough treatments often do. The review did mention that certain studies found English ivy remedies could result in “rapid reduction in cough severity and/or frequency.”

A study conducted with 268 children experiencing coughs found that English ivy herbal extract helped reduce symptoms of rhinitis, cough and viscous mucus in the majority of children. Tolerability and compliance were found “good to very good” in almost all patients, and side effects were very limited.

3. Can Help Purify the Air in Your Home

Does English ivy make a good house plant? There are pros and cons to growing this plant inside your home.

It can definitely help purify the air and potentially help allergies or other reactions to irritants in your home, however it can also be irritating if you, your children or your pets touch it.

According to Better Homes and Gardens, “English ivy is an old-school houseplant that’s still trendy thanks to its easy-care nature, elegant look, and versatile stems.”

The benefit of having this plant grow in indoor locations is its ability to cut down air pollution, since it acts as a natural air filter to remove organic air pollutants — including benzene, formaldehyde and trichloroethylene.

Hedera helix has been shown to be very effective at naturally filtering out indoor air pollutants. Just keep in mind that it can take up a good deal of space since it tends to climb and wind around structures in your home, and it’s best not to touch it too much.

Keep the plant somewhere with low light, and remember to keep the soil moist. Try growing it in hanging baskets suspended in front of a window or on a shelf that leaves room for it to expand about three feet.

Keep it away from heating and air-conditioning vents, and prevent the soil from getting too dried out.

Can Hedera helix be poisonous to humans? It’s generally thought to be safe when taken as a supplement in recommended dosages, however there have been rare reports of side effects, including indigestion/upset stomach and nausea.

Overall, the side effects of this supplement are not well-known, so use caution when beginning to take it, and start with a small dose.

Is English ivy poisonous to touch?

Like some other types of ivies, this plant can cause contact dermatitis and rashes when exposed directly to the skin. If you’re going to be handling it with your hands, it’s best to use gloves.

Limit contact with the plant if you have sensitive skin or are prone to severe rashes from other ivies.

There are several different ways to use English ivy in supplant form, including by taking extract capsules, ivy leaf cough syrups, or herbal teas made with either fresh or dried ivy leaves.

Because each product varies in terms of its strength, always read dosage recommendations and directions. A general recommendation for adults of dried English ivy leaf is about 300–800 milligrams per day taken by mouth.

You’ll find English ivy extract in products like cough syrups, with the names Prospan, Panotos, Athos or Abrilar, or herbal drops, such as Prospan Herbal Drops. In most cases these treatments are used when someone is experiencing respiratory symptoms for about one to three weeks. They may need to be taken up to three times daily.

English ivy is sometimes used in combination with other herbs that support the immune system and respiratory system, including evening primrose and thyme. You can find this combination in some natural cough syrups and herbal treatments intended to treat coughs.

If you choose to make English ivy tea at home, use about one handful of fresh leaves (or 1/4 cup dried leaves) for every cup of water. Consume about one to two cups of this tea daily, starting with a small amount to test your reaction.

Is it safe to give children English ivy supplements?

English ivy extract is generally considered safe to give to children, such as to help treat coughs or bronchitis symptoms.

One study found that ivy leaf extract in the form of syrup and cough drops was an effective and safe treatment of cough in children, causing mild/non-serious side effects in less than 2% of children who used it.

Another 2020 study concluded that herbal medicine containing ivy leaf dry extract administered twice a day “may be a good alternative to current therapeutic regimens in the treatment of productive cough in children,” based on high levels of satisfaction with its use by patients and guardians of children.