When you see the word flour, it typically means that something has been ground into a flour, either from its original state or a dried state. It is no different with green banana flour. Not to be confused with the plantain, organic green banana flour may be familiar to you if you are always on the lookout for gluten-free flours, making it popular among those who suffer from celiac or are gluten-intolerant.

Green banana flour — which made my list of 19 Healthy New Ingredients to Cook With — has become increasingly more common since it is a source of resistant starch, also known as insoluble dietary fiber, a go-to for those who lean toward Paleo or primal-like diets.

What Is Green Banana Flour?

Resistant starch “resists” the process of breaking down into sugars. This may help lower blood sugar levels. Additionally, it may help you feel more satiated, lowers pH levels and helps reduce cell damage. Another bonus to the green banana flour and other forms of resistant starch is that it helps form good bacteria in the gut. This good bacteria helps protect the cells.

Africa and Jamaica know this flour well since it is quite popular alternative to wheat flour due to its lower price point. With a texture similar to lighter wheat flours, it has a mild banana flavor when eaten raw and an earthy flavor when cooked, requiring 25 percent less volume than wheat flours. (1)

Metabolic syndrome is not so much a disease as it is a set of risk factors involving high blood pressure, high blood sugar, obesity and high cholesterol levels. The problem is that, while having any of these factors is risky, having them all combined worsens the situation, possibly increasing the risk of diabetes by about five times. These issues can cause heart disease and strokes too. (2)

A study out of Brazil was conducted to understand the effects of green banana flour consumption as it relates to weight and body measurements in obese women. The thought was that since the glycemic index of banana flour is low, it could improve weight and overall health in individuals with metabolic syndrome.

The findings indicate that though there was no significant weight loss or change in body measurements, there were improvements in metabolic syndrome symptoms, including a reduction in  “systolic blood pressure and fasting glucose.” (3)

A healthy colon requires a healthy gut, which is why probiotics and prebiotics are so popular today. What does this have to do with green banana flour and resistant starch? When the bacteria eats the resistant starch, it produces a short-chain fatty acid called butyrate. Butyrate is useful for the cells that line the colon because it keeps them healthy, even helping fight cancerous cells.

The intestines love butyrate since it keeps things working properly, which is hugely important because the intestines have the role of providing immune cells, enteric neurons, intestinal microflora and nutrients. Additionally, with a good dose of potassium also found in the banana nutrition, the cells get an added boost of support. (4)

With the resistant starch characteristics that green banana flour can provide, it may help reduce insulin sensitivity. A study out of the Louisiana State University System was conducted in mice showing that on a high-fat diet, supplementation of butyrate — which is formed by the fermentation of the green banana flour in the gut — led to weight maintenance without reducing the amount of food intake. The study concluded that through dietary supplementation of butyrate, it is possible that it can prevent and treat diet-induced insulin resistance. (5)

Furthermore, a study published in the International Journal of Environmental Research examined the effects of native banana starch on glycemic responses in obese and lean subjects. The researchers specifically looked at glucose to measure effects. They concluded that banana starch supplementation “improved postprandial glucose and insulin responses in obese and lean subjects during 48 [hours] of everyday life and at [meal tolerance test].” (6) 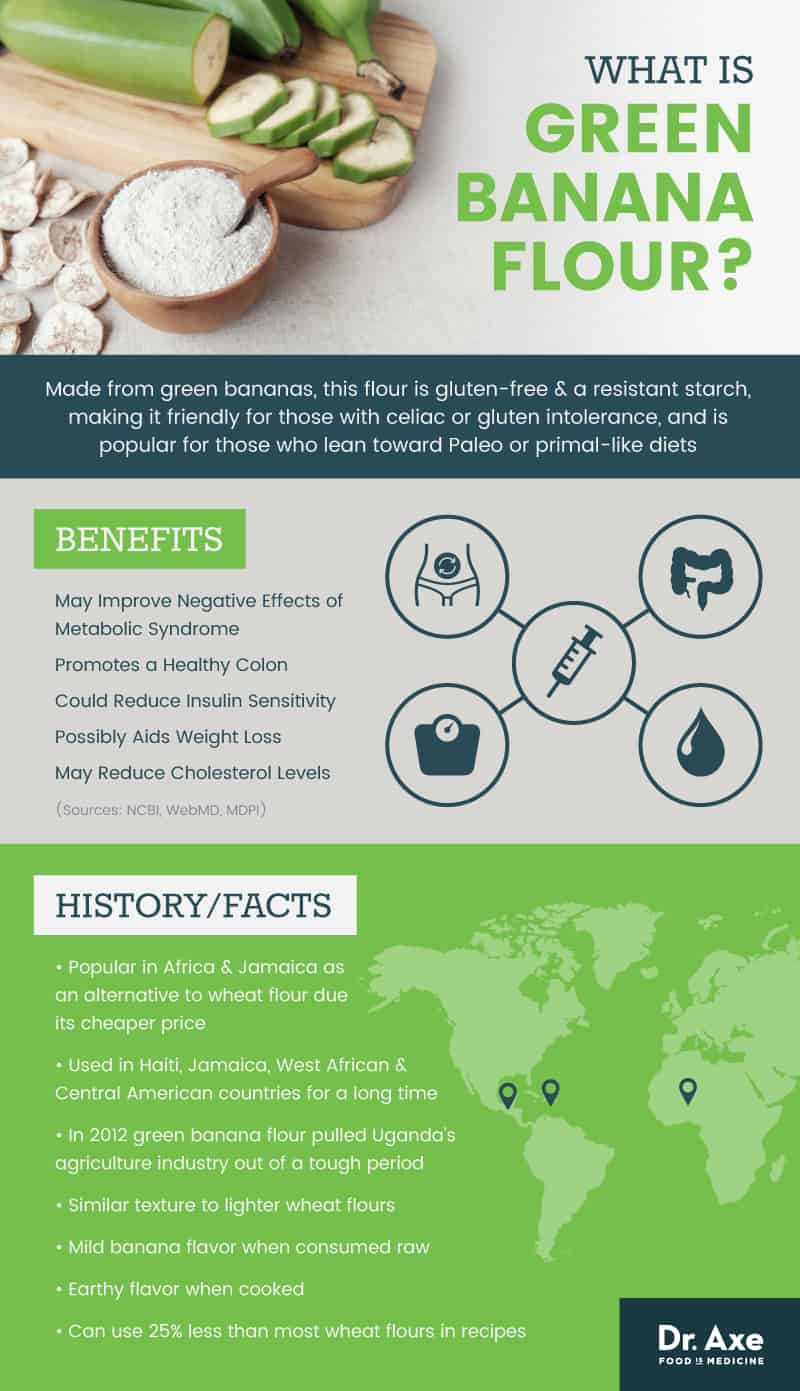 While resistant starch helps keep blood sugar levels in check, it also may help with weight loss. Green banana flour offers bulk, so when eaten, you may feel fuller sooner since it promotes satiety. (7)

A study out of Mexico published in the International Journal of Environmental Research introduced native banana starch and soy milk to assess body weight as well as insulin sensitivity in obese type 2 diabetics. The study indicates that patients that consumed the native banana starch actually lost more body weight than when those same patients were on the control treatment; therefore, the green banana flour may help as a supplement to weight loss. (8)

In another study sourced from South Dakota State University, the use of resistant starch decreased the levels of various types of cholesterols found in the participants. Twelve women and eight men diagnosed with metabolic syndrome were the chosen subjects for the study. Each had an abdominal fat level that was considered obese and at least two other conditions, such as high blood pressure, diabetes, high triglycerides or low levels of good cholesterol. The study indicates that the average total bad  (LDL) cholesterol of the participants dropped a good bit. Their weight and measurements also decreased. (11)

Related: Banana Fungus Discovered in Colombia: How Will This Impact Banana Production?

Green Banana Flour vs. Other Flours

Wondering how green banana flour stacks up against some of the most popular flours out there? Here’s what you need to know: (13, 14)

Where to Find and How to Use Green Banana Flour

To gain the benefits of resistant starch, I suggest using it in your morning smoothie or other cold beverage. If gluten-free is the goal, using it for baking is great. You can use less than wheat flour. Experiment with your recipes.

It’s fairly easy to find online or at many grocery stores or health food stores. Look for organic and make sure nothing is added to the product.

Green banana flour may not be in your kitchen cupboard quite yet, but it has actually been around for some time. Haiti, Jamaica, and countries in West Africa and Central America have been using green banana flour for a very long time as a stand-in for regular flour because it is cheaper. In fact, in 2012 green banana flour pulled Uganda’s agriculture industry out of a tough period. (13)

Additionally, a government-funded pilot program known as the Presidential Initiative for Banana Industrial Development worked to support farmers by developing what it calls matookes. Matookes are large, green cooking bananas transformed into a gluten-free flour for to enhance global export. The International Agriculture Group shares that converting the green bananas into flour has helped reduce on waste when the banana is not meeting the size and shape standards for the shelf.

Is banana flour good for you? Consuming green banana flour can help reduce weight, keep an eye on insulin or help with the characteristics of metabolic syndrome, but it’s important to consume in moderation.

Additionally, if you need to avoid gluten, it is definitely an option for baked goods and sauces. So give this popular new ingredient a try for a little extra nutrition in your flour of choice.

While the name may make you smile and laugh with thoughts of ...
Read More
Dr. Axe on Facebook 22 Dr. Axe on Twitter 0 Dr. Axe on Instagram Dr. Axe on Google Plus Dr. Axe on Youtube Dr. Axe on Pintrest 22 Share on Email Print Article 44