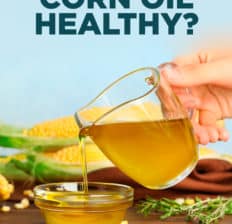 These days, what qualifies as a healthy cooking oil is pretty confusing. For instance, “vegetable oils” — such as corn oil, canola oil and sunflower oil— seem like they would be health-promoting considering they’re derived from “vegetables,” but this isn’t necessarily the case.

Corn oil is one type of vegetable oil that you’ll find in food products like:

Is corn oil healthy, or is corn oil bad for you? As you can tell from the list of foods above, corn oil makes its way into many processed and packaged foods that are lacking nutritional value.

On the other hand, corn oil has a high smoke point and does contain some vitamin E.

Let’s find out more below regarding the pros and cons of using this oil, plus other healthy fats to emphasize in your diet instead.

What Is Corn Oil?

Corn oil is derived from the germ of corn, meaning the part of corn that is capable of germinating and growing into more corn.

It’s considered a “refined oil” because it goes through a lengthy process before being sold in stores to customers. To make corn oil, fat must be removed from corn kernels using methods such as pressing, hexane extraction, deodorization and winterization in order to improve the taste, smell and appearance.

Most available corn oil has a neutral taste and high smoke point, which is why it’s often used to fry foods at high temperatures and moisten packaged foods. In addition to being used to fry, it can be baked with, grilled with, or used in sautés and stir-fries.

Is corn oil the same as vegetable oil?

Corn oil is one type of vegetable oil, but it isn’t the only type and these two terms don’t necessarily mean the same thing.

The category of vegetable oils includes oils made from diverse plant species. Oils that fall into this category can include:

Some of these are healthier choices than others due to their chemical compositions and how easily they become rancid once heated.

When you shop for cooking oils in stores you may see oil labeled as “vegetable oil.” This is usually a blend of several oils, including canola, corn and soybean oil.

Corn oil is also a key ingredient in some margarines (which are considered unhealthy).

All cooking oils contain roughly the same amount of calories and grams of fat, protein, sugar and carbohydrates. (They are virtually free of everything except for fat.)

Does corn oil have nutritional value? While corn itself does contain some nutrients, such as fiber and vitamin C, corn oil is mostly pure fat and does not provide a significant amount of fiber, protein, antioxidants or minerals.

Some oils, such as olive oil, grapeseed oil and corn oil, do provide some antioxidants and vitamins, including vitamin E. However, generally speaking corn oil is mostly a source of fat, including monounsaturated fat and polyunsaturated fatty acids.

According to the U.S. Department of Agriculture, one tablespoon of corn oil contains approximately:

Linoleic acid can be beneficial when consumed in small amounts and when it’s obtained in a healthy ratio to other types of fats.

Once eaten, linoleic acid is converted to gamma-linolenic acid (GLA), which studies suggest offers health perks such as helping reduce inflammation and keep cholesterol levels within a healthy range. GLA may also help decrease the risk for developing dangerous blood clots due to its lowering effects on platelet aggregation and may offer some protection against insulin resistance.

Corn oil contains some phytosterols, which are plant-based compounds that can help reduce LDL “bad” cholesterol by blocking its absorption and support healthy levels of total cholesterol.

There’s evidence suggesting that higher intake of phytosterols may lower the risk for developing heart disease, although the connection between different cooking oils and heart disease remains controversial. Phytosterols also have some other health-promoting effects, such as anti-inflammatory, immunomodulatory and anticancer effects.

Studies have found that rice bran oil, corn oil and grapeseed contain some of the highest phytosterols content among all vegetable oils.

Corn oil contains a good amount of vitamin E, with about 13% of your daily needs in one tablespoon.

4. Has a High Smoke Point

Corn oil has a high smoke point of approximately 450 degrees Fahrenheit, which means it’s a better choice for cooking at high temperatures compared to some other oils and fats.

The smoke point of an oil or cooking fat refers to its burning point or the temperature at which the fat begins to oxidize, changing its chemical structure in a negative way.

While vegetable oils that are high in polyunsaturated fats are not typically the best choices for cooking methods such as frying or grilling because they’re known to oxidize easily, corn oil is an exception (as is avocado oil, which has an even higher smoke point of about 520 F).

Why is corn oil bad for you? The main problem with corn oil and similar vegetable oils is that they are high in omega-6 fatty acids.

While a healthy diet does include some omega-6 fats, which are a type of polyunsaturated fat, many people consume too many of these fats since they are highly prevalent in processed foods (things like salad dressings, frozen foods, baked goods, etc.).

An imbalance of omega-6 and omega-3 fatty acids in one’s diet, meaning too many omega-6s and not enough omega-3s, can contribute to problems related to inflammation. There’s evidence that over-consumption of omega-6s can raise one’s risk for metabolic syndrome, obesity, cardiovascular disease, certain cognitive disorders and even certain types of cancer.

For the most health benefits, include a variety of fats in your diet, such as oily fish like salmon, nuts, seeds, unrefined cooking oils and avocado, but not to overdo vegetable oils, which provide very high amounts of omega-6s and nearly no omega-3s.

How to Use It (Plus Healthier Substitutes)

If you do choose to use corn oil when cooking at home, ideally purchase organic, GMO-free corn oil. Store it away from heat and light to help kee it from oxidizing and becoming rancid.

Here are cooking methods that corn oil works well for:

Which is better: corn oil or vegetable oil?

As mentioned above, it’s hard to answer this question without knowing which specific vegetable oil you’re referring to. Corn oil has many things in common with other popular vegetable oils like canola, sunflower and soybean oil, so you can think of them as mostly similar in terms of their pros and cons. (For example, they contain lots of omega-6 polyunsaturated fats.)

Is corn oil better for you than olive oil?

Overall, olive oil is considered by most experts to be a healthier choice.

Olive oil is unique in that it contains a lot of monounsaturated fats and provides health benefits like antioxidants and oleic acid. That said, corn oil shares some of the benefits of olive oil, such as supporting healthy cholesterol, because it also contains some healthy fatty acids.

Extra virgin olive oil is the least refined/processed type, which is made without chemical solvents like many other veggie oils. It doesn’t have a very high smoke point, however, so it should be used to drizzle over food or with low-heat cooking.