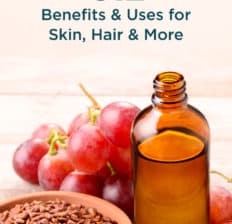 If you’re not sure which oils to buy these days and which to skip, you’re definitely not alone. The world of cooking oils can be really confusing — with all the talk about different methods for “pressing” the oils, ideal cooking temperatures, various smoke points and so on — and grapeseed oil doesn’t make this issue any clearer.

Grapeseed oil is one cooking oil that’s a bit controversial. On one hand, it’s similar to benefit-rich olive oil in that it contains some monounsaturated fat.

Why might grapeseed oil be bad for you, according to some opinions? Mostly because it’s made of polyunsaturated fats (PUFAs), particularly the types called omega-6s and omega-9s.

In the right doses, these fats can be anti-inflammatory and health-promoting for hormone production, your brain, heart and more. However, grapeseed oil’s high levels of PUFAs and omega-6s may be bad news — since most people already get way too much of these fatty acids in their diets.

What Is Grapeseed Oil?

Grapeseed oil is made by pressing grape (Vitis vinifera L.) seeds. What you might not know is that it’s usually a leftover byproduct of winemaking.

After wine is made, by pressing the juice from grapes and leaving the seeds behind, oils are extracted from the crushed seeds. It might seem odd that oil is held within a fruit, but in fact, a small amount of some type of fat is found inside just about every seed, even those of fruits and vegetables.

Because it’s created as a byproduct of winemaking, grapeseed oil is available in high yields and is usually expensive.

What is grapeseed oil used for? Not only can you cook with it, but you can also apply grapessed oil to your skin and hair due to its moisturizing effects.

According to the USDA, one tablespoon of grapeseed oil has about:

Grapes themselves are packed with nutrients, especially certain types of antioxidants — which is why studies show that wine (especially red wine) that supplies resveratrol can be beneficial in small to moderate amounts.

How about oil made from the seeds of grapes? It’s not exactly the same thing, as it isn’t beaming with the same vitamins, resveratrol, dietary fiber or “proanthocyanidins.”

There are some grapeseed oil benefits, thanks to its vitamin E and phenolic antioxidant content, for example, but at the end of the day, it lacks vitamin K, vitamin C, copper and potassium compared to eating actual grapes.

Studies have found that the highest percentage of fatty acid in grapeseed oil is linoleic acid (LA), a type of essential fat — meaning we can’t make it on our own and must obtain it from food. LA is converted to gamma-linolenic acid (GLA) once we digest it, and GLA can have protective roles in the body.

There’s evidence demonstrating that GLA might be able to lower cholesterol levels and inflammation in some cases, especially when it’s converted to yet another molecule called DGLA. It might also help decrease the risk for developing dangerous blood clots due to its lowering effects on platelet aggregation.

One study published in the International Journal of Food Science and Nutrition even found that compared to other vegetable oils like sunflower oil, the consumption of grapeseed oil was more beneficial for lowering inflammation and insulin resistance in overweight or obese females.

One animal study also found that consumption of grapeseed oil helped improve antioxidant status and adipose fatty acid profiles (the types of fats stored in the body below the skin).

Grapeseed oil contains a good amount of vitamin E, which is an important antioxidant that most people could use more of. Compared to olive oil, it offers about double the vitamin E.

This is huge, because research indicates that vitamin E benefits include protecting cells from free radical damage, supporting immunity, eye health, skin health, as well as many other important bodily functions.

There might still be some debate as to which ratios of different fatty acids are best, but there is no debate about the dangers of trans fats and hydrogenated fats, which is why they should be avoided.

Trans fats are commonly found in ultra-processed foods, fast food, packaged snacks and fried foods. The evidence is so clear that they’re bad for our health that they’re even banned in some cases now, and many large food manufacturers are committing to moving away from using them for good.

The smoke point of an oil or cooking fat refers to its burning point or the temperature at which the fat begins to oxidize, changing its chemical structure in a negative way. Beneficial nutrients found in unrefined oils are destroyed when the oil is overheated — plus the taste can become unappealing

PUFAs are not usually the best choice for cooking because they’re known to oxidize easily, which causes them to become “toxic.” However, grapeseed oil has a moderately higher smoke point than olive oil and certain other PUFA oils.

With a smoke point of 421 degrees Fahrenheit, it’s appropriate for high-heat cooking, such as sauteing or baking, but deep frying is still recommended. For comparison sake, avocado oil has a smoke point of about 520 degrees, butter and coconut oil have smoke points of 350 degrees, and olive oil has one of about 410 degrees.

Is grapeseed oil better than olive oil? What about avocado oil?

Just like other vegetable oils (such as corn, safflower, soybean or sunflower or canola oil), grapeseed oil contains PUFAs, in addition to small amounts of vitamins like vitamin E.

PUFA consumption has been tied to lower cholesterol levels, improved heart health and certain other benefits, but striking a balance with PUFA intake in proportion to other fats — like omega-3s, monounsaturated fats and saturated fats— is important.

If we compare the amount of omega-6s in grapeseed oil to other fats, we find that grapeseed has one of the highest levels. Here are how different oils stack up:

Some experts will tell you that if you consider the available nutrients, you’re better off probably eating grapes and using another source of fat, such as olive or coconut oil. That said, using grapeseed oil for high-heat cooking has benefits over using fats with lower smoking points.

Is grapeseed oil the healthiest for your skin? It’s on par with other hydrating oils, such as almond, jojoba or avocado oil.

It has many has many uses for skin care and is especially beneficial for people with dry skin types or sun damage. It can be used to moisturize dry skin and hair naturally.

It also potentially has some anti-inflammatory and antimicrobial effects that can protect skin due to the presence of certain fatty acids, such as linoleic acid.

Since it’s free from synthetic ingredients, a good source of vitamin E and loaded with moisturizing fatty acids, there seems to be nothing wrong with using unrefined grapeseed oil topically.

If you’re prone to oily skin, you may find that grapeseed oil is a lightweight moisturizer that doesn’t contribute to clogged pores. It also makes a good natural massage oil and carrier oil (to be mixed with essential oils), including for sensitive skin.

Oils can be made in various ways — for example, some products are “cold-pressed” or “expeller-pressed” (like those labeled as extra virgin), while others require chemical solvents and a very lengthy process to draw the oils out.

In order to extract the oil from the tiny grape seeds, heavy machinery and sometimes chemicals need to be used. Some modern industrial machines used to make oils heat the oil to very high temperatures, which is the opposite of what we want, since this can chemically alter the fatty acids.

For this reason, the potential benefits of different grapeseed oils depend a lot on how the oils are processed and bottled.

Cold-pressing, or expeller-pressing, means that the product wasn’t heated to very high temperatures during the manufacturing process. This keeps the molecular composition of the fatty acids from negatively changing.

Cold-pressing is basically using powerful machines to squeeze the oil out, without exposing it to chemical solvents or other ingredients that can make their way into the oil and be damaging to your health.

To cut costs and speed up efficiency, most manufacturers turn to solvents, such as hexane, along with high-heat machines during the processing period. Thus, you might have to pay a bit more for high-quality, pure grapeseed oil products, but it’s worth it.

To prevent the oil from going rancid, make sure it’s not exposed to light and high heat while being stored.

Grape seed extract is also sourced from grape seeds. It’s taken as a dietary supplement in capsule form, most often to help manage conditions caused by inflammation and those that affect the cardiovascular system, according to the National Institutes of Health.

What is grapeseed oil good for when it comes to cooking? It’s generally a good substitute for olive oil, such as when stir-frying and sauteing at moderate or low heat. It’s also definitely a step up from processed oils like sunflower, corn and safflower oils.

In terms of its taste, it’s virtually flavorless and odorless, which some people like because it doesn’t alter the taste of recipes like some other fats sometimes can. When making salad dressings or dips, other flavorful oils like virgin olive oil are probably a better choice.

That said, it doesn’t overpower the flavor of other ingredients, so as Bon Appetit magazine suggests, you may want to use it in order to let high-quality balsamic vinegars or other flavors stand out.

When it comes to cooking, pure grapeseed oil is relatively stable and can be heated without going rancid easily. However, it’s best not to fry with it, since PUFAs are not the best type of fat for this purpose.

What types of cooking methods are a good use of grapeseed oil?

Overall, aim to use it sparingly, such as by also using avocado oil or grass-fed butter/ghee when cooking, which are recommended substitutes. This ensures your diet includes a variety of different fats, each with its own unique benefits.

What is bad about grapeseed oil? The fatty acid composition of grapeseed oil is where things get controversial.

The balance or ratio between different fats is what’s really important. An abundance of omega-6s in the diet compared to other fats (omega-3s, especially) is problematic because this can increase inflammation levels, according to studies.

Omega-6s aren’t bad by nature. People just seem to get too much of them for their own good.

Different authorities recommend different ratios of omega-3s to omega-6s (such as 1:1 or up to 10:1), but most accept that higher omega-3 intake is correlated with better health.

People living in the Mediterranean usually eat a diet very low in factory farm-raised animal products, refined oils and packaged snacks, which is one more reason why the American diet doesn’t look so good.

Here are some downsides to consuming a diet too high in omega-6s: