Nutritional yeast, also known as savory yeast or nooch, is an inactive type of yeast made from sugarcane and beet molasses. In the scientific form Saccharomyces cerevisiae, or sugar-eating fungus, yeast cells use the sugar for energy.

Yellow in color, nutritional yeast comes in flakes, granules or a powder-like form and is often used as a condiment due to its savory taste and health benefits. It has a nutty, cheesy flavor and is often used to emulate cheese in vegan dishes, thicken sauces and dressings, and act as an additional boost in nutrients because it’s filled with an array of B vitamins.

So is nutritional yeast good for you? How does it differ from regular yeast? And why should you consider adding this pantry staple to your next shopping list? Here’s what you need to know.

What Is Nutritional Yeast?

Nutritional yeast is an ingredient that is grown on mixtures of cane and beet molasses. Once the fermentation process has completed, the yeast is harvested, washed, pasteurized, dried and packaged. It’s available in flakes, granules or powder form and is sprinkled over dishes or used to enhance the taste and texture of soups and sauces.

This popular ingredient is used all over the world. Because of its unappetizing name, it has be given various other names and is commonly known as “nooch” (nüch) and “yeshi,” an Ethiopian name meaning “for a thousand.” In Australia, it is called “savory yeast flakes,” and the New Zealanders call it “brufax.”

In  addition to supplying foods with a cheesy flavor, nutritional yeast is well-known for its nutritional value as well. In fact, it contains a long list of nutrients and is packed with fiber, protein, B vitamins, zinc and more.

Here are a few of the steps that are used to bring this nutrition powerhouse to the shelves of your supermarket:

So is all nutritional yeast the same? When browsing the aisles of your local store, you may notice that there are two distinct types, each of which has notable differences in terms of nutritional value.

The best nutritional yeast for you may vary based on your specific needs. Vegans, for instance, may benefit from a fortified version, which can provide a host of nutrients that may be challenging to get from food sources alone, such as vitamin B12. Others simply looking to bump up their protein or fiber intake may prefer to opt for an unfortified type instead.

Baker’s yeast, meanwhile, is an active form of yeast that is used to leaven bread and other baked goods. Nutritional yeast is deactivated and pasteurized during processing, which means that it’s inactive and won’t have the same effects as baker’s yeast in recipes. 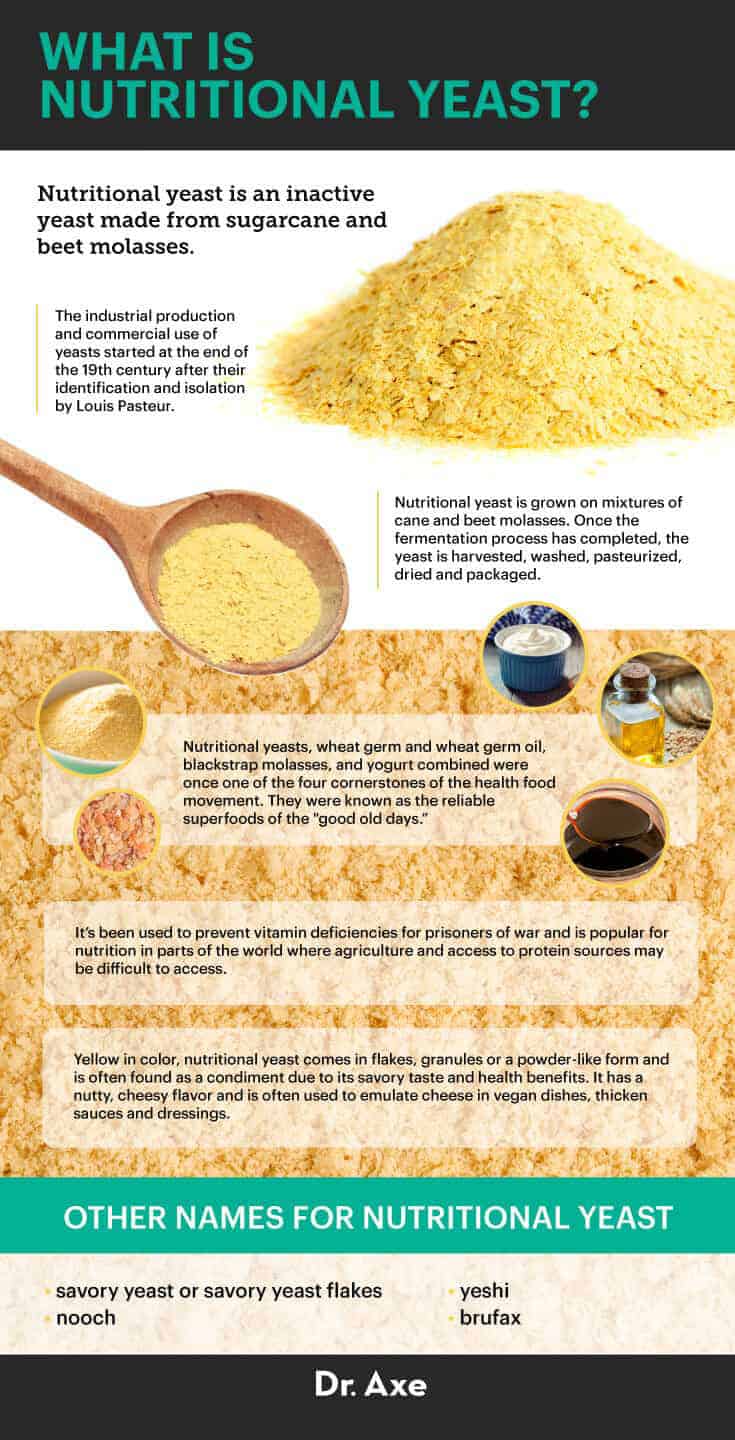 While it cannot replace whole food, nutritional yeast can help provide much needed vitamins, especially to vegans and vegetarians, who often have concerns about getting enough B vitamins in their diets. Each serving contains a low amount of nutritional yeast calories but a high amount of protein, vitamins and minerals.

Keep in mind that this shows a fortified version. You can purchase nutritional yeast that has not been fortified as well. It may be a good idea to blend the two for optimal health benefits.

Nutritional yeast provides the compounds beta-1,3 glucan, trehalose, mannan and glutathione, all of which are associated with enhanced immune function. In fact, animal models have found that these compounds could help reduce the risk of infection in pigs by blocking harmful bacteria from attaching to the lining of the intestines.

One animal model published in Anticancer Research even found that beta-glucan could be useful in the treatment of lymphoma in mice by decreasing tumor growth.

In an article by Dr. Alan Christianson, N.D., published in Nutrition Science News, he reports that nutritional yeast provides a significant dose of minerals, such as iron. This is especially useful for athletes who train more than four hours per week, as it can help prevent iron deficiency.

Dr. Seymour Pomper, an expert in yeast, notes that nutritional yeast is the fourth most prescribed herbal monopreparation in Germany due to its antiviral and antibacterial properties. Interestingly enough, only ginkgo biloba, St. John’s wort and horse chestnut are consumed at higher levels.

Pomper explains that because nutritional yeast has not been associated with the Candida albicans strain related to yeast infections, it has proved to be one of the best remedies for chronic candida symptoms, a specific type of yeast infection. It has also shown profound effects on E.coli, salmonella and staphylococcus.

German monographs indicate nutritional yeast as a medicinal choice for diarrhea and loss of appetite, and studies showcase the digestive system benefits of nutritional yeast. The probiotics in nutritional yeast have shown positive effects on diarrheal patients, and although more research is needed, it may aid in the treatment of diarrhea.

In addition, nutritional yeast is helpful for those who suffer the symptoms of lactose intolerance since it does not contain any dairy products. One study published in the journal Clinical Infectious Diseases suggests that Saccharomyces cerevisiae expresses significant sucrase and some isomaltase activity but no lactase activity, and it has been proposed to improve malabsorption in patients with sucrase-isomaltase deficiency who intentionally or unintentionally consume sucrose.

Nutritional yeast is a complete protein containing at least nine of the 18 amino acids that your body cannot produce. This is great news, especially for vegans and vegetarians who may struggle to find enough protein sources in the diet.

Nutritional yeast is loaded with B vitamins, including thiamine, riboflavin, vitamin B6 and folate. Not only are these key vitamins crucial to cell metabolism, mood regulation, nerve function and more, but they’re also critical to ensuring a healthy pregnancy.

Folate is especially important. It can help reduce the risk of birth defects and optimize fetal growth and development. Studies show that low levels of folate during pregnancy may actually be associated with preterm delivery, low birth weight, neural tube defects and growth retardation.

One of the top benefits of nutritional yeast is its content of vitamin B12, an important water-soluble vitamin that is essential for DNA synthesis, red blood cell production and maintaining the health of the nervous system. Unfortunately, many vegans and vegetarians are at a higher risk for deficiency, as vitamin B12 is found primarily in animal products and select fortified foods.

The nutritional yeast B12 content can range, especially depending on whether it’s fortified or unfortified. However, studies show that supplementing with fortified nutritional yeast can be an effective way to restore vitamin B12 levels in those who are deficient.

You can easily find this superstar ingredient at most major grocery stores as well as many online retailers. Some of the most popular brands include Bragg nutritional yeast, Trader Joe’s nutritional yeast and Red Star nutritional yeast — although there are plenty of other varieties available as well.

Most popular among vegans and vegetarians, nutritional yeast flakes are delicious, adding amazing flavor and nutrition without the high fat and calories associated with cheese. For those who are lactose intolerant, nutritional yeast is a perfect choice because it can be sprinkled on pasta, salads, baked or mashed potatoes, soups, and even popcorn. You can even use it to make a tasty nutritional yeast cheese sauce, without all of the lactose, fat or calories found in regular cheese. 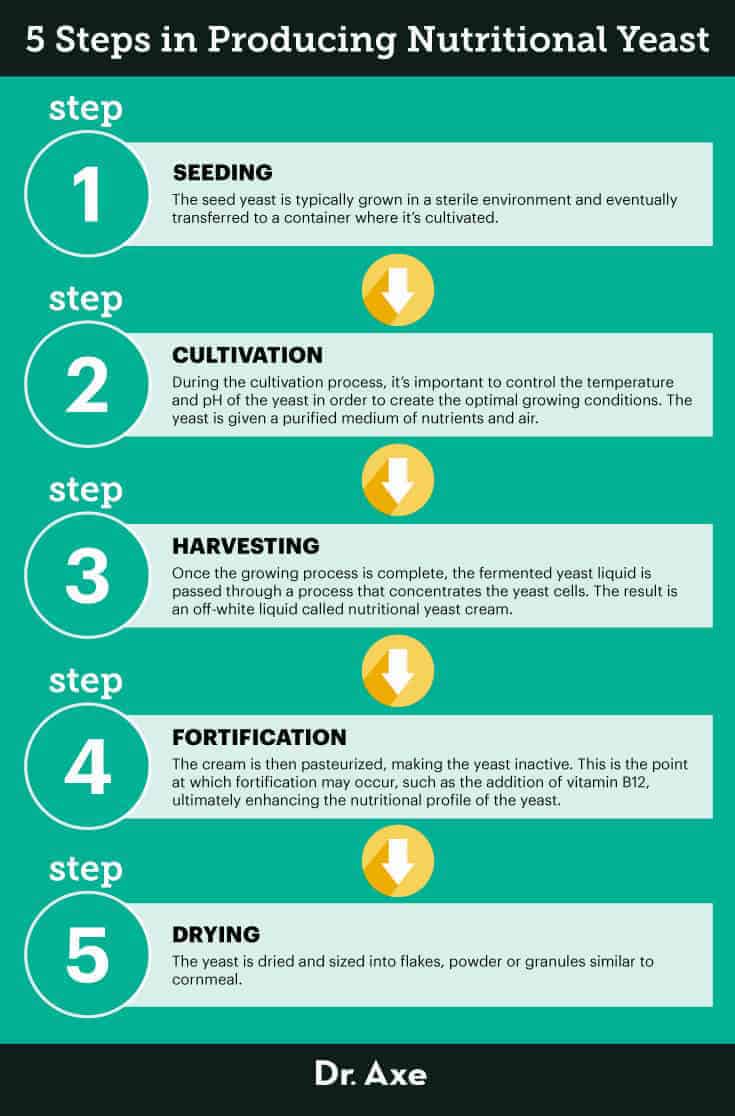 What are the side effects of nutritional yeast? For most people, the potential nutritional yeast dangers are minimal, and it can be safely enjoyed as part of a healthy, well-rounded diet. Not only is nutritional yeast gluten-free and vegan-friendly, but it’s also free of lactose, sugar, additives and preservatives.

If you have an allergy to yeast, it’s best to avoid this ingredient altogether to prevent food allergy symptoms, such as hives, itching, swelling and stomach pain. On the other hand, if you have a sensitivity to the active yeast found in bread, nutritional yeast is likely safe as it is pasteurized and deactivated during processing.

However, with all new foods, it’s always best to consume a small amount first and slowly work your way up to assess your tolerance and prevent adverse side effects. If you have any issues metabolizing folic acid, you may also want to moderate nutritional yeast intake and select unfortified varieties whenever possible.

Another common question is: Do you put nutritional yeast in the fridge? It does not need to be refrigerated, but it should be stored in a dark, cool and dry area to maximize its shelf life. Although it can usually last around a year or two with proper storage, it’s important to monitor any changes in color, taste and smell to make sure it’s still good prior to consumption.