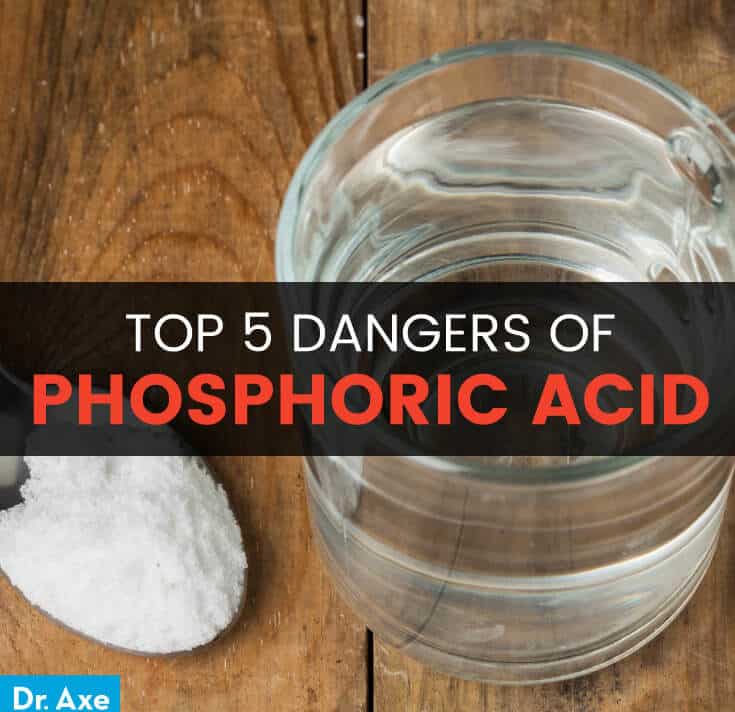 Have you ever ingested phosphoric acid? Most likely, yes — so what is it?

This type of acid is used as a rust inhibitor, a dental and industrial etchant, fertilizer feedstock, and as an ingredient in home cleaning products.

So wait — why on earth would you have consumed such a thing? Because it’s also commonly added to soda and other processed foods and beverages to give them a more tangy flavor.

It’s a clear, odorless substance commonly added to colas in particular. It makes the flavor more intense and also slows down the growth of bacteria and molds that would otherwise grow rapidly in the sugar-rich beverage.

You might already know that soda and diet soda have a lot of negative health consequences, but you might not be aware of the common health-hazardous acid many sodas contain. For starters, ingestion of phosphoric acid can cause some really unwanted side effects, including diarrhea, stomach cramps, nausea and vomiting, and that’s not all.

What Is Phosphoric Acid?

Phosphoric acid is a colorless and odorless inorganic mineral acid.

It can be either a liquid or transparent crystalline solid that’s corrosive to metals as well as human tissue.

Other facts about this acid (especially for the science lovers out there):

Why is phosphoric acid in Coke and other consumable products? Food and beverage manufacturers like it because it’s cheap, adds tartness and acts as a preservative.

The food industry continues to include phosphate additives in foods that would actually be low-phosphorus foods if left alone. For example, bottled iced black tea can become a high phosphate drink because of manufacturer additives.

When it comes to processed foods that contain phosphoric acid, dark-colored sodas like colas typically contain more than other sodas. One container of soda can contain up to 500 milligrams of this acid.

The exception is root beer, which is dark in color but typically contains very little of this acid.

Why do food and beverage manufacturers even use this chemical at all? They use it to give their processed products a sharper, tangier flavor.

Plus, it also acts as a preservative.

Phosphoric acid uses in food and drink are legal. The U.S. Food and Drug Administration also allows it in processed cheeses and other dairy products to adjust their pH levels.

Watch for these other names for phosphoric acid on ingredient labels:

While there are many common phosphoric acid uses, scientific research confirms that ingestion of this acid may have a number of possible health repercussions.

Studies have linked phosphoric acid to lower bone density in humans. One study in 2000 linked the intake of cola beverages to an increased rate of bone fractures in physically active girls in the ninth and 10th grade.

Another study published in the American Journal of Clinical Nutrition hypothesized that the consumption of colas containing caffeine and phosphoric acid decreases bone mineral density (BMD). Researchers measured BMD in the spine and hips of 1,413 women and 1,125 men.

For women, they found that cola intake was associated with significantly lower BMD in the hips but not the spine. Overall, the mean BMD of those with daily cola intake was 3.7 percent lower at the femoral neck (the bridge of bone that connects the ball of your hip to the top of your femur) and 5.4 percent lower at Ward’s area (a region of the neck) than of those who consumed less than one serving of cola each month.

The conclusion of the study is that cola consumption is associated with low bone mineral density, especially in women.

The fact that the non-cola beverages didn’t seem to negatively affect bone density and the fact that even decaffeinated cola had a negative impact point toward phosphoric acid as the enemy of bone health.

The consumption of cola beverages rich in phosphoric acid has been linked to urinary changes, chronic kidney disease and kidney stones. Healthy kidneys rid the body of any extra phosphorus, but excess phosphoric acid can be taxing on the kidneys, especially for people with chronic kidney disease who are typically advised to avoid high-phosphorous foods.

Phosphorus is naturally found in many foods so it’s not hard for us to get enough of, but it becomes problematic when we start getting too much in our diets. The phosphoric acid found in colas and other processed foods is problematic because it can easily lead to an overload of phosphorus in our bodies.

A study published in the journal Epidemiology evaluated the dietary habits of 465 people with chronic kidney disease and 467 healthy subjects.

What did researchers find? Drinking two or more colas a day, either regular or diet, was associated with twice as great a risk of developing chronic kidney disease.

3. Can Decrease Nutrients in the Body

Most people easily meet their daily phosphorus needs through their diets, especially if they consume foods high in phosphorus. It’s actually more common to have too much phosphorus in the body rather than too little.

Getting an excess of phosphorus in your diet can decrease your body’s calcium levels, and research has even linked daily cola consumption to hypocalcemia.

In addition, it can lead to phosphorus overload, which can impair your body’s utilization of vital nutrients like iron, magnesium and zinc. Deficiencies in any of these nutrients can lead to all kinds of other health problems.

In food usage, the phosphoric acid is literally used to acidify foods and beverages.

Is acid bad for you?

Many acids (like omega-3 fatty acids) can be healthy, but phosphoric acid is not one of them.

Thanks to phosphoric acid, cola beverages are extremely acidic. In fact, according to a study by the Southern Illinois University School of Dental Medicine, the top three most acidic soft drinks available today are all colas.

Do you know what the pH of Coke is?

The pH of Coke products ranges from 2.5 to 4.2. The most acidic Coke product is Coke Classic with a pH of 2.5.

To put these numbers in perspective, 7 is a neutral pH level with 0 being the most acidic pH, which is why you should step away from cola.

Phosphoric acid is used for metal cleaning and refining, as well as fertilizer manufacturing. It’s also found in disinfectants and detergents.

With those usages, it’s not so surprising that this acid is commonly found on lists of “strong acids” or chemicals commonly used in industry that can cause chemical burns.

If it can remove rust from metal, what can this acid do to our insides?

What is surprising is the the fact that this chemical would be put into anything coming into contact with our bodies, especially our internal bodies.

There are many well-established possible phosphoric acid hazards or dangers.

As a corrosive chemical, phosphoric acid can irritate and burn the eyes and skin. It can also irritate the nose, throat and lungs, leading to wheezing and coughing.

It’s also interesting to note that the same process of producing phosphoric acid, including metal treatment, refractories and catalysts, is also used to create the version of the acid used in food and beverages.

Can You Ever Consume It?

According to the FDA, phosphoric acid is “generally recognized as safe when used in accordance with good manufacturing practice.”

While the amounts used in food and beverages today are considered safe, according to a scientific review published in 2015:

Use of phosphoric acid remains controversial, since it has been associated with adverse health effects. High levels of phosphorus in the blood, referred to as “hyperphosphatemia,” can lead to organ damage, most notably of the kidneys. Poor kidney function can raise levels of phosphorus in the blood, which in turn lowers calcium levels, increasing the risk of brittle bone disease. Moreover, increased serum phosphorus levels, as well as other mineral abnormalities, can individually and collectively contribute to vascular calcification and cardiovascular disease.

As an additive in food and drink, can this type of acid be consumed with no obvious unwanted side effects? Sure.

Can intake of added phosphoric acid cause problems for some people? Yes!

Sodas, particularly colas, are the main way people consume phosphoric acid. Drinking clear sodas instead, such as ginger ale, can help you to cut down on your intake, but that’s still a very high sugar option — and there are better alternatives to these health-hazardous soft drinks.

If you really need to get your fix of bubbles, opt for a naturally sparkling mineral water that gives you the carbonation without any added acids (check labels to be sure) — plus you’ll get some minerals in your system as well without a sugar overload.

You can also try making my homemade switchel recipe. With inflammation-reducing ginger and apple cider vinegar, this is an easy-to-make, refreshing drink loaded with healing ingredients.

Kombucha is another awesome alternative to soda. You get the fizzy bubbles (that result from natural fermentation) along with a powerful punch of probiotics, B vitamins and enzymes.

You can also try making this kombucha recipe at home. Coconut water is another much healthier alternative to soda that provides valuable electrolytes.

Despite being revered for its medicinal properties for thousands of years, maca ...
Read More
Dr. Axe on Facebook 11 Dr. Axe on Twitter 0 Dr. Axe on Instagram Dr. Axe on Google Plus Dr. Axe on Youtube Dr. Axe on Pintrest 22 Share on Email Print Article 11

If you were to ask a practitioner of traditional medicine, “How can ...
Read More
Dr. Axe on Facebook 6 Dr. Axe on Twitter 22 Dr. Axe on Instagram Dr. Axe on Google Plus Dr. Axe on Youtube Dr. Axe on Pintrest 0 Share on Email Print Article 6

In the summertime, things get a whole lot more colorful, including your ...
Read More
View All