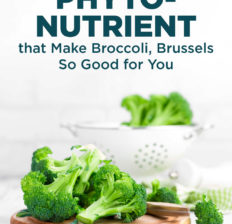 Cruciferous vegetables, such as broccoli and cauliflower, are well-known for their disease-preventive effects, but have you ever wondered why exactly that is? One reason is because of the compound called sulforaphane, which you’ll find in certain vegetables and other also in extract form.

What does sulforaphane do for the body? Studies show it can help fight cancer, diabetes, arthritis and other inflammatory conditions, brain and liver damage, and more.

Sulforaphane (SFN) is a phytochemical compound that’s naturally found in some vegetables, specifically those in the Brassica (or cruciferous) plant family. This includes veggies like broccoli, cabbage, Brussel sprouts and cauliflower.

You can obtain sulforaphane from eating these vegetables, plus from supplements (such as those made from broccoli sprouts) that contain concentrated extract forms of SFN.

Technically, SFN is a type of aliphatic isothiocyanate. It’s thought to have high bioavailability compared to other phytonutrients, making it very useful for potentially helping prevent and treat diseases, especially cancer.

SFN is produced by the conversion of glucoraphanin through the enzyme called myrosinase.

Here’s more about how SFN can benefit various aspects of your health:

A number of studies have found that sulforaphane can help reduce biomarkers of inflammation, including among both overweight and otherwise healthy adults. This suggests that SFN can help manage inflammation-related conditions, including arthritis, cardiovascular disease and others.

One way in which SFN suppresses inflammation and oxidative stress is by impacting NF-κB, a key regulator of inflammatory responses. It can also down-regulate proinflammatory enzymes, such as cyclooxygenase (COX-2) and NO synthase (iNOS), giving SFN cancer-fighting and anti-carcinogenic effects.

SFN works as an indirect antioxidant in a way that reduces the risk for type 2 diabetes and its complications, such as neuropathy (nerve damage).

It can help prevent oxidative stress and lipid peroxidation, which are thought to be important factors in the pathogenesis of diabetes complications. It may also help reduce LDL “bad cholesterol” and generally support cardiovascular health.

3. May Help in Treatment of Some Cancers

Because SFN can kill cancer cells and suppress tumor growth in their early stages, it’s used in extract form to treat certain types of cancer, such as prostate cancer and pancreatic cancer.

Sulforaphane has been shown to induce apoptosis (death of cancer cells), suppress cancerous cell cycles so their progression is limited, inhibit angiogenesis (formation of new blood vessels that allow tumors to grow) and anti-inflammatory activities, and inhibit metastasis (spreading of cancer to other locations in the body).

Why is sulforaphane good for the liver? Due to its ability to boost antioxidant effects in the body and support phase 2 detoxification enzymes, it can help prevent the liver becoming damaged and dysfunctional.

Some of the ways it supports detoxification and liver function include:

Sulforaphane itself is not an actual antioxidant, but instead it exerts antioxidant effects primarily by induing glutathione and other antioxidant compounds. Therefore, it’s considered an “indirect antioxidant.”

This means that SFN can decrease oxidative stress, which is a major contributor to many age-related diseases.

SFN supports glutathione in promoting detoxification and protecting us against toxicity and disease. It can also provides DNA protection against harmful mutations.

Sulforaphane limits pro-inflammatory effects and harmful effects of chemicals that can contribute to various lung diseases. It improves the body’s ability to remove toxins related to respiratory diseases, and it’s a potent inducer of HO-1 (haemoxygenase-1), which plays an important role in modulating the effects of oxidants in the lungs.

By blocking growth of the harmful bacteria known as Helicobacter pyloris, SFN can help decrease the risk for gastric tumor and ulcer formation. It may also possibly protect against stomach cancer.

Because it can promote healthy microflora in the colon, SFN also potentially offers protection against colorectal cancer.

8. Protects the Brain From Damage

SFN is thought to have a positive impact on dopaminergic neurons in the brain, which are associated with Parkinson’s disease. Research shows that SFN helps prevent dopaminergic cells in the brain from experiencing cytotoxicity and neuronal death, which can contribute to Parkinson’s.

It may also help defend against other neurodegenerative diseases, such as Alzheimer’s disease, in part by protecting mitochondria.

Sulforaphane from food sources is thought to be very safe overall. Of course, if someone has a sensitivity or allergy to cruciferous vegetables, that person should avoid consuming them.

Sulforaphane is also available in broccoli extract products. These are generally safe when used in recommended amounts for up to six months.

It’s important not to overuse sulforaphane supplements, which can potential cause side effects, such as stomach upset, gastrointestinal discomfort and weight gain.

Who should not take sulforaphane? Are there any interactions with other drugs?

Sulforaphane can affect how quickly the liver breaks down substances, including some medications.

If you take medications, especially the types listed below, don’t start supplementing with this compound unless you speak with your health care provider first about possible interactions. This is particularly important if you have liver disease, heart disease or diabetes, or if you take anticonvulsant medications.

Use caution if you take any of these medications (Note: other medications not listed here may also interact with SFN):

Broccoli, especially young broccoli sprouts, has been shown to be the most significant dietary source of sulforaphane.

Other cruciferous vegetables also have a high sulforaphane content, including:

It’s best to lightly cook cruciferous veggies or eat them raw if you can tolerate them to absorb the most SFN. Overheating and cooking these veggies can deplete some SFN, so try not to roast or grill them until they’re burnt.

Supplement brands also vary widely in terms of how concentrated their products are — therefore always read the label carefully.

When SFN has been studied, including in human and animal studies, dosages tend to range between 3–10 µmo per kilogram of body weight.

SFN can be toxic when take in very dosages between 150–300 mg/kg body weight, so never take a higher amount than recommended.