Everyone seems to be talking about green smoothies, superfood shakes and vegetable juices nowadays, and for good reason. All around the world, people are learning that including more healthy greens in your diet can help curb cravings, boost immunity and support overall health.

Kale is one of the most common veggies found in these superfood concoctions. Not only does the cooked kale nutrition profile boast a wide array of essential vitamins, minerals and antioxidants, but this superstar ingredient is featured in nearly every eating pattern, from the Mediterranean diet to Paleo to the ketogenic diet and more.

Rich in vitamins K, A and C, along with other vital nutrients, there are a multitude of kale benefits for skin, heart health, inflammation and more. Keep reading to learn more about this powerful leafy green and some simple ways to add it to your diet.

Kale comes from the Acephala group of the Brassica oleracea (oleracea var) species, which also includes collard greens. There are two main varieties: one that has green leaves and one that has purple. Interestingly, the central leaves do not form a head, which is one reason why it is considered to be more closely related to wild cabbage than most domesticated forms of vegetables.

As part of the Brassica oleracea (oleracea var) vegetable species, it is in good company and shares many of the same characteristics as its cousins. In fact, kale is closely related to vegetables like arugula, bok choy, broccoli, Brussels sprouts, cabbage, cauliflower and more.

There are several different types of kale, each of which differs based on its unique appearance, color and taste. Some of the most common types include: 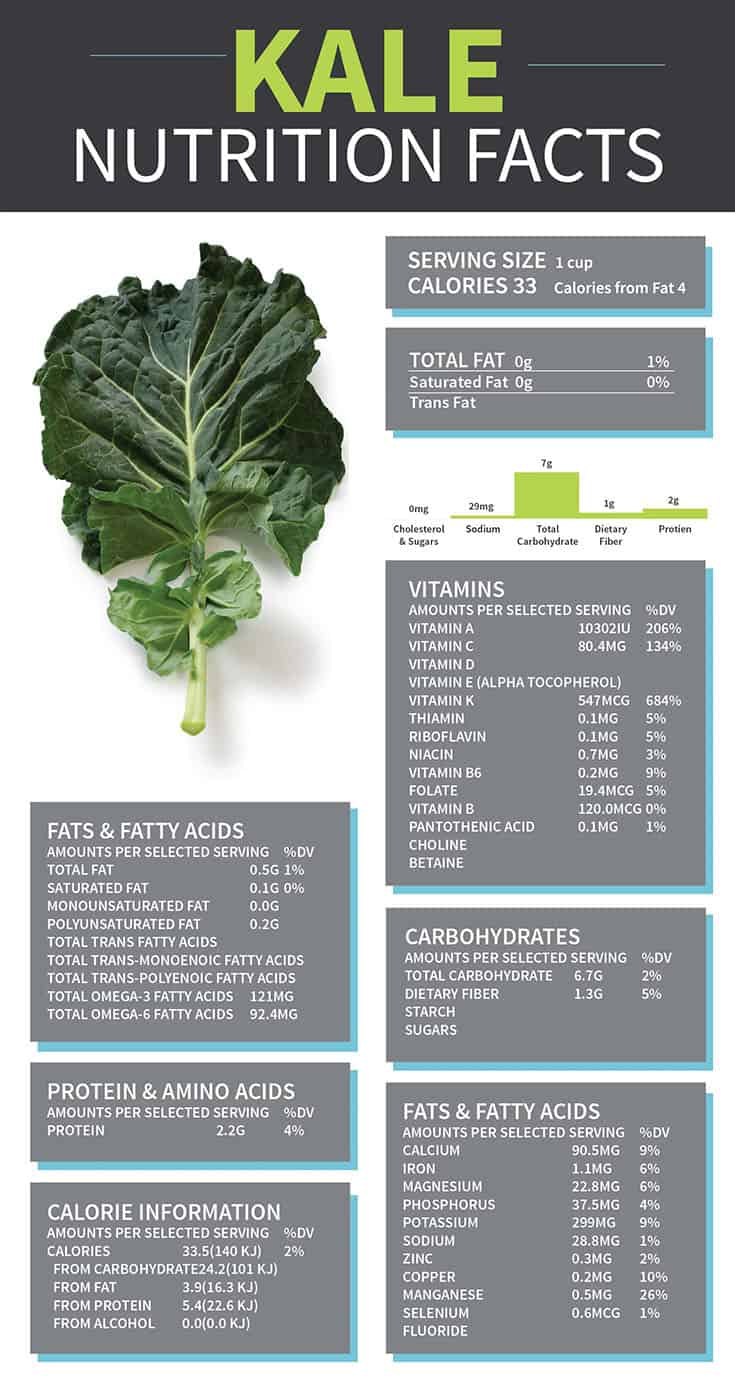 Kale is a great source of many important nutrients, including fiber, vitamin K, vitamin A and vitamin C.

One cup of raw kale contains the following nutrients:

In addition to the nutrients above, each serving also contains a small amount of niacin, zinc, pantothenic acid and selenium.

Besides being highly nutritious, kale has also been associated with a number of health benefits. Here are a few of the top reasons to consider adding this leafy green to your next shopping list.

Arguably the most beneficial property of eating kale is its ability to relieve inflammation, thanks to its content of antioxidants. Antioxidants are important compounds that can help fight free radical damage, reduce oxidative stress and, most notably, decrease inflammation.

What’s more, each serving also provides a good amount of plant-based omega-3 fatty acids in the form of alpha linolenic-acid (ALA). Omega-3 fatty acids are involved in a number of aspects of health and are especially important for the regulation of inflammatory processes in the body.

Going hand-in-hand with its anti-inflammatory potency, kale is one of the top antioxidant foods. In fact, it’s particularly rich in vitamin C and beta-carotene, which is the precursor to vitamin A.

Not only can antioxidants help protect against cell damage caused by free radicals, but they also play a central role in health and disease. Research shows that antioxidants could be especially beneficial against chronic conditions such as heart disease, cancer and diabetes.

One of the top health benefits of this cruciferous vegetable is its ability to naturally detoxify the body. It not only helps remove toxins, but also helps eliminate them entirely.

This is due to the  presence of isothiocyanates (ITCs), which are a compound found in kale that have been shown to help detox your body at the cellular level. These ITCs are a powerful “one-two punch” against toxins and free radicals. They also help stimulate the production of phase II enzymes, which are responsible for detoxifying the body by promoting the excretion of  harmful substances. 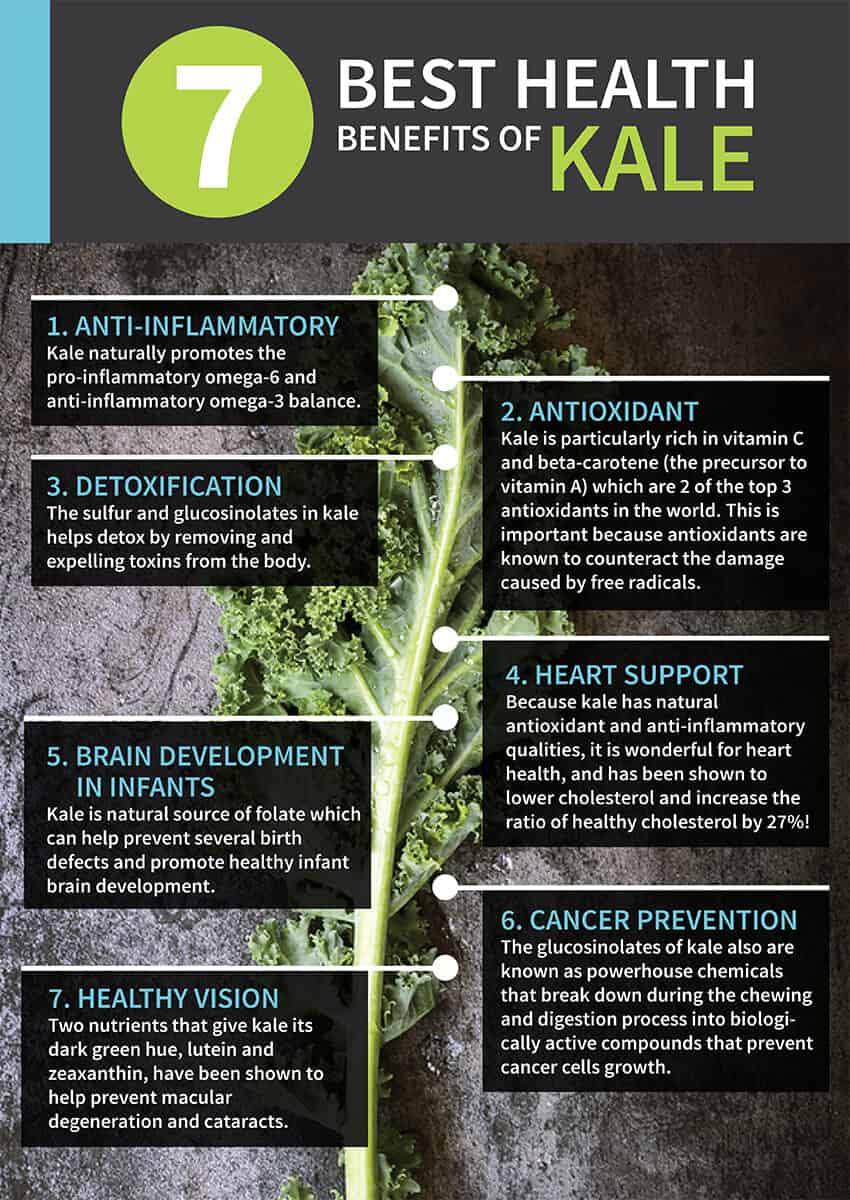 The powerful antioxidant and anti-inflammatory properties of kale make it a perfect food for promoting heart health. It also contains many micronutrients that are crucial to heart health, including vitamin K, potassium and omega-3 fatty acids.

Several studies have confirmed the heart-boosting benefits of kale. In fact, one study out of Seoul even found that drinking 5 ounces of kale juice daily for 12 weeks increased levels of HDL (good) cholesterol by 27 percent and reduced levels of LDL (bad) cholesterol by 10 percent. Other studies have found that it could also decrease blood pressure and stabilize blood sugar levels, both of which are major risk factors for heart disease.

Another one of the key benefits of kale is its ability to promote healthy fetal development. This is because it is a valuable source of folate, which is essential for preventing birth defects and promoting healthy neural tube formation. Getting enough folate in your diet may also reduce the risk of other pregnancy complications, including anemia and pre-term birth.

Kale is also high in vitamin K, calcium and copper, all of which are necessary for bone health and skeletal formation during pregnancy. Getting enough of these nutrients is also important during breastfeeding, as studies show that women can lose 3-5 percent of bone mass while breastfeeding due to the baby’s increased need for calcium.

Cruciferous vegetables, including kale, have been extensively studied for their ability to inhibit the growth of cancer cells in vitro. According to the National Cancer Institute, the secret behind the cancer-killing ability of cruciferous veggies is that they’re rich in glucosinolates, which are a large group of sulfur-containing compounds.

These powerhouse chemicals are known to break down in the digestive tract and form biologically active compounds, including indoles, thiocyanates and isothiocyanates. Although more research is needed in humans, indoles and isothiocyanates have been shown to protect against cancer of the bladder, breast, colon, liver, lung and stomach in animal models and in vitro studies.

Another one of the amazing health benefits of kale is it can improve your eyesight, thanks to the presence of lutein and zeaxanthin, two compounds that give this leafy green its signature hue and have been shown to help prevent macular degeneration and cataracts.

Both lutein and zeaxanthin act as antioxidants in the eye and filter harmful high-energy blue wavelengths of light. According to the American Optometric Association (AOA), they also protect and maintain healthy cells, which may help prevent retinal damage and preserve vision.

Kale is versatile and easy to enjoy in a variety of different recipes. It works especially well paired with fruit and blended into a kale smoothie, like in this Peachy Super Kale Shake. You can also try baking a batch of Kale Chips for a simple snack that’s great if you’re on the go. Here are a few other cooking tips and easy ways to enjoy kale:

You can also make kale juice, add it to soup or use it to help ramp up the nutritional profile of any meal.

Kale is available at most grocery stores and supermarkets and can be found in the produce aisle, alongside other leafy greens and vegetables.

Keep in mind that kale is one of the most heavily pesticide-sprayed crops, so be sure to buy organic whenever possible to minimize your exposure.

Washing produce thoroughly can also help remove any pesticide residue, along with bacteria, dirt and debris. To wash kale, remove the stems and submerge in water completely. Then, rinse under running water to remove any remaining residue.

Despite the impressive kale nutrition facts and potential benefits of this cruciferous veggie, there are a few risks and side effects to consider as well.

Although uncommon, some people may be allergic to cruciferous vegetables, including kale. If you experience any adverse side effects after eating this leafy green, discontinue consumption immediately and talk to your doctor.

Keep in mind that kale is also very high in vitamin K. For those on blood thinners, maintaining a steady intake of vitamin K is crucial. While greens like kale vs spinach can still be enjoyed in moderation, it’s best to talk to your doctor before making any drastic changes to your diet.

5 Foods for Your Joints That Nourish Your Connective Tissue
4

Top Nutrient-Dense Foods and Their Benefits
1

As is the case with so many of the Earth’s herbs, bladderwrack ...
Read More
Dr. Axe on Facebook 6 Dr. Axe on Twitter 22 Dr. Axe on Instagram Dr. Axe on Google Plus Dr. Axe on Youtube Dr. Axe on Pintrest 1 Share on Email Print Article 29

What Is Quark Cheese? Nutrition, Benefits & How to Make It

Cucamelon: How to Grow Instagram’s Most Popular Superfood

What would happen if you combined a watermelon with a grape? Turns ...
Read More
Dr. Axe on Facebook 5 Dr. Axe on Twitter 22 Dr. Axe on Instagram Dr. Axe on Google Plus Dr. Axe on Youtube Dr. Axe on Pintrest 1 Share on Email Print Article 6

What Is Tallow? Top 5 Reasons to Use This Form of Fat

Want to know a little-known fact about McDonald’s french fries? Before Mcdonald’s ...
Read More
View All