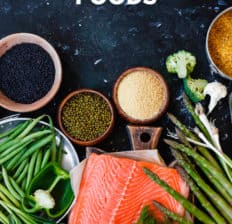 While you may have never heard the term nutrient density before, you’re likely already familiar with the concept of eating mostly nutrient-dense foods.

There are many ways that health experts describe the idea of eating a nutrient-dense diet. For example, Dr. Joel Fuhrman, author of the book “Eat to Live,” coined the now-trendy term “nutritarian.” I love this term!

A nutritarian describes someone who chooses foods based on their micronutrient per calorie content. In other words, a nutritarian doesn’t bother counting calories, eating only low-fat foods or sticking to a raw food diet. Nor does a nutritarian follow a “one-size-fits-all” diet plan or theory.

Rather, he or she focuses on eating a variety of the most nutrient dense foods available — in other words, unprocessed, whole foods — in order to feel satisfied and remain healthy.

What Is Nutrient Density?

Nutrient density refers to the amount of beneficial nutrients in a food in proportion to how many calories it has (or its energy content).

According to the National Institutes of Health and the U.S. Department of Health & Human Services, “nutrient-dense foods” are those that provide a high amount nutrients but have relatively few calories.

Fruits and veggies are probably what come to mind when you think of healthy foods, but other whole foods have high nutrient density values, too. Examples include wild-caught fish, cage-free eggs, beans and peas, raw nuts and seeds, grass-fed lean meats and poultry, and ancient/whole grains.

Let’s look at eggs as an example: are eggs nutrient-dense? Yes, free-range eggs are considered by most to be healthy foods — because in just 75 calories per large egg, you’ll get plenty of B vitamins, choline, vitamin D, plus healthy fats like omega-3s, and some protein, too.

Why Are Nutrient-Dense Foods Important?

Healthy, whole foods provide us with essential vitamins, minerals, amino acids (that form protein), fatty acids and more. Another way a nutrient-dense diet could be described is as an anti-inflammatory diet, which we know is important for preventing chronic diseases and risk factors like heart disease, high blood pressure, diabetes and obesity.

Many experts believe that your overall health may be determined in part by your nutrient intake divided by your calorie intake. For example, the U.S. Department of Agriculture tells us that the overall quality of people’s diets depends upon factors, including:

Here’s another way to look at it: In terms of the amount of nutrients you’d get per calorie consumed, 600 calories worth of fast food french fries is obviously NOT the same as 600 calories of kale.

Nutrient-dense foods are real and unprocessed as opposed to chemically altered, manmade or filled with synthetic ingredients.

Nutrients found in healthy, whole food include micronutrients like essential vitamins, trace minerals and electrolytes like magnesium/calcium/potassium, plus macronutrients, including carbohydrates (both “simple” and “complex”), proteins (amino acids) and different types of healthy fats.

A well-rounded, largely unprocessed diet is superior to taking supplements and eating a processed diet because real foods have complex chemical structures that are very difficult to replicate. For example, antioxidants and phytochemicals found in many plant foods support the immune system, the body’s detoxification processes and cellular repair.

What foods are most nutrient-dense?

Based on the amount of nutrients in proportion to the amount of calories that these foods have, here are the most nutrient-dense foods available to us:

Unfortunately, as the American Heart Association puts it, “the standard American diet (SAD) is energy-rich and nutrient-poor.”

A diet that includes high-fiber, nutrient-dense foods can lead to weight loss/weight management, since this approach cuts out empty calories from things like added sugar, processed grains and refined oils.

When you repeatedly choose foods that pack fewer calories into each bite, you naturally lower the overall calorie density of your diet. This helps you get all the essential vitamins and minerals you need without feeling hungry or deprived, and it also prevents over-consuming calories and gaining weight.

A big advantage to following a nutrient-dense diet is that you can maintain a healthy weight without cutting out any particular foods or food groups, following any fad diets or counting calories. It’s much easier to eat an appropriate amount of calories, even without restricting yourself, when you simply reduce or remove processed foods from your diet that are high in sugar, chemicals, sodium and additives.

In fact, because nutrient-dense foods are low in calories to begin with (because they tend to have lots of fiber, water and no additives), you may be able to actually eat MORE food but still lose weight in the process. Healthy foods like veggies, fruits, and in moderation legumes/beans or whole grains are very voluminous and filling — therefore not very easy to overeat.

How to Add More Nutrients to Diet

Ready to increase the amount of nutrients you pack into your meals? Here are some tips for adding the most nutrient dense foods to your diet:

Author and lecturer Michael Pollan points out that there are 80,000 known edible plant foods, about 3,000 of which have been, or still are, in common use in the human diet. And yet over 60 percent of calorie intake worldwide consists of just four highly subsidized, industrialized crops: corn, rice, soy and wheat.

This is a problem because it means that people obtain so many of their daily calories from foods that don’t offer many nutrients.

While whole foods provide lots of essential nutrients, all with a low calorie “price tag,” processed foods tend to offer the opposite — lots of “empty calories” but little real nutritional benefit in return.

What foods are not nutrient dense? Examples of low nutrient-dense foods and drinks include:

Buying organic produce is definitely a step in the right direction to avoid dangerous chemicals, pesticides, herbicides and GMOs. But buying organic isn’t always necessary, nor is it always your best bet in terms of boosting your diet’s nutrient density.

While I do recommend buying organic foods when you can, I think it’s equally (or even more) important to buy local, fresh foods. Ideally we would all have access to local, organic, nutrient-dense foods throughout the year, but that’s not always possible.

Rather than trying to be perfect, do the best you can. Shop at farmers’ markets, join a community-sponsored agriculture group or, in the warmer months of the year, consider growing some foods organically yourself.

People love to oversimplify foods in the human diet. But foods cannot necessarily be quantified and classified based on their individual nutrients alone.

For example, some processed foods may contain synthetic vitamins, but this doesn’t make them healthy. When you quantify foods according to basic nutrients they contain, rather than considering the complex combination of compounds found in whole foods, you lose sight of the big picture.

In other words: It’s easy to slap a label on a cereal box claiming that the product is “high in omega-3’s!”  But of course this does not necessarily make that product good for you. You want to focus on getting nutrients into your body the natural way as much as possible.

Another issue is that many protective antioxidant phytonutrients are still “unnamed and unmeasured” so they can only be obtained through eating a variety of nature’s most nutrient-dense foods. We can also assume that foods that contain the highest amounts of known nutrients (like leafy green veggies and berries, for example) likely contain the largest number of beneficial, but unknown, compounds as well.

4. Aim for Variety and Balance

If a very active person ate only the foods highest in nutrients, he or she would ingest too much fiber and not get enough calories every day. This would actually be damaging to the person’s health, contributing to malnutrition, low energy levels, lowered metabolic rate, weakness and mood-related problems.

Eat a variety of real foods that you enjoy from all different food groups (including protein and fats, in addition to plants), and you should already be on your way to eating a nutrient-dense, balanced diet. Try to think positively about what types of foods you should be eating, rather than focusing on those that you shouldn’t have eaten.

It’s a well-known fact that many Americans don’t eat enough fruits and vegetables each day, but even among those who do, they may not get all the nutrients they might expect. “Nutrient degradation” describes the loss of vitamins, minerals and other nutrients in food due to factors like depleted soils, food manufacturing, processing and shipping, and to a lesser extent cooking and heating foods.

In 2002, an analysis of Canadian supermarkets produce by The Globe and Mail and CTV News found that nutrient levels had fallen dramatically in fruits and vegetables during the course of just a generation.

Comparing nutrient level changes in a 50-year span, the analysts found that the average supermarket potato had lost:

Twenty-five fruits and vegetables were analyzed with similar findings. Broccoli is thought of as one of the most popular superfoods, and yet according to some research, modern-day broccoli may be about 63 percent lower in calcium and 34 percent lower in iron than in previous centuries.

Agronomist Phil Warman says that modern farming practices and market emphasis are mostly at fault for nutrient degradation. According to his research, “The emphasis is on appearance, storability and transportability, and there has been much less emphasis on the nutritional value of fruits and vegetables.” High-yield production and disease-resistance are much more important to food producers today, says Warman, than nutritional content of foods.

U.K. professor Tim Lang agrees: “It’s an issue of consumer rights. We think of an orange as a constant, but the reality is — it isn’t.”

You’d have to eat five oranges today to get the iron your grandmother got from just one and about eight oranges to get the same amount of vitamin A!

A major problem regarding nutrient density is the fact that industrial farms are growing crops in soil that has falling levels of nutrients.

Reporter Tom Paulson calls it “the thin brown line,” the three feet of topsoil that covers the Earth and sustains life. This living biological matrix contains the essential compounds that plants turn into usable nutrients, and yet the National Academy of Sciences reports that American crop soil is being eroded at 10 times the rate that it can replenish itself.

Topsoil grows back at the rate of an inch or two over hundreds of years, but industrial agriculture is interfering with the process, says geologist David Montgomery. “The estimate is that we are now losing about 1% of our topsoil every year to erosion, most of this caused by agriculture. Globally, it’s pretty clear we’re running out of dirt.”

This soil degradation across the planet is contributing to rapidly rising cases of malnutrition, warns the United Nations. The farming methods used by industrial agriculture leave soil little time to restore itself.

Although not a staple food in the United States, plantains have a ...
Read More
View All