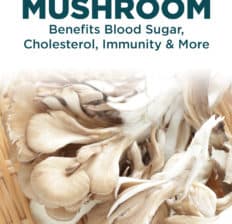 Medicinal mushrooms have been used for thousands of years to help promote better health, and mushroom varieties, such as psilocybin mushrooms and turkey tail mushrooms, are well-known for their incredible health-promoting properties. The maitake mushroom is no exception.

Not only is it delicious and full of nutrients, but it also boasts some pretty amazing health benefits.

In recent years, the maitake mushroom has garnered worldwide attention as more and more emerging research continues to unearth its multitude of health-promoting properties. This is largely thanks to the presence of D-fraction, a specific compound extracted from the maitake mushroom that has been shown to have therapeutic effects for cancer patients.

Today, maitake mushrooms are continuing to gain widespread popularity across the globe as more people have come to appreciate them for their medicinal properties, versatility and delicious flavor.

What Are Maitake Mushrooms?

Also known as hen of the woods or Grifola frondosa, maitake mushrooms are a type of edible fungi that are native to China but are also grown in Japan and North America. They are commonly found in clusters at the base of maple, oak or elm trees and can grow to over 100 pounds, earning them the title “king of the mushrooms.”

The maitake mushroom has a long history in its use as both a culinary and medicinal mushroom. The name “maitake” comes from its Japanese name, which translates to “dancing mushroom.” It is said that people would dance for joy upon discovering the mushroom thanks to its potent healing powers.

This beneficial food has a unique, frilly appearance, a delicate texture and an earthy flavor that works well in many different dishes, from burgers to stir-fries and beyond. While often considered a staple in Japanese cuisine, Grifola frondosa has also been gaining widespread popularity around the globe in recent years.

Not only that, but these medicinal mushrooms have also been associated with a wide variety of health benefits, from regulating blood sugar to dropping cholesterol levels. They are also considered adaptogens, meaning that they contain powerful properties that can help naturally restore and balance the body to promote better health.

Sustaining high levels of sugar in your blood can bring some serious consequences when it comes to your health. Not only can high blood sugar lead to the development of diabetes, but it can also cause side effects like headaches, increased thirst, blurred vision and weight loss.

When consumed as part of a healthy, well-rounded diet, maitake mushrooms may help stabilize blood sugar levels to sidestep these negative symptoms. One animal model conducted by the Department of Food Science and Nutrition at Nishikyushu University’s Faculty of Home Economics in Japan found that administering Grifola frondosa to diabetic rats improved glucose tolerance and blood glucose levels.

Another animal study had similar findings, reporting that the fruit of the maitake mushroom possesses powerful anti-diabetic properties in diabetic mice.

In recent years, several promising studies have researched the potential connection between the maitake mushroom and cancer. Although research is still limited to animal models and in vitro studies, maitake grifola may contain powerful cancer-fighting properties that make the fungi a worthy addition to any diet.

One animal model published in the International Journal of Cancer showed that administering an extract derived from the Grifola frondosa to mice helped effectively block tumor growth.

Similarly, a 2013 in vitro study reported that maitake mushroom extract could be useful in suppressing the growth of breast cancer cells.

Keeping your cholesterol levels in check is absolutely essential when it comes to maintaining a healthy heart. Cholesterol can build up inside the arteries and cause them to harden and narrow, blocking blood flow and forcing your heart to work harder to pump blood throughout the body.

The health of your immune system is vital to overall health. It acts as a natural defense system for your body and helps fights off foreign invaders to protect your body against injury and infection.

Adding a serving or two of Grifola frondosa to your diet may help boost your immune system to ward off disease. An in vitro study published in the Annals of Translational Medicine concluded that maitake grifola mushrooms were effective in stimulating an immune response and were even stronger when paired with shiitake mushrooms.

In fact, the researchers out of the University of Louisville’s Department of Pathology concluded, “Short-term oral application of natural immunomodulating glucans from Maitake and Shiitake mushrooms strongly stimulated both the cellular and humoral branch of immune reactions.”

Polycystic ovarian syndrome, also known as PCOS, is a condition caused by an overproduction of male hormones by the ovaries, resulting in small cysts on the ovaries and symptoms like acne, weight gain and infertility.

Some research suggests that maitake mushrooms may be therapeutic against PCOS and could help combat common issues like infertility. A 2010 study conducted at the J.T. Chen Clinic’s Department of Gynecology in Tokyo, for example, found that maitake extract was able to induce ovulation for 77 percent of participants with PCOS and was nearly as effective as some of the conventional medications used for treatment.

High blood pressure is an incredibly common health condition that is estimated to affect a whopping 34 percent of U.S. adults. It occurs when the force of the blood through the arteries is too high, placing excess strain on the heart muscle and causing it to weaken.

Another animal study out of the Department of Food Chemistry at Tohoku University in Japan had similar findings, finding that feeding rats maitake mushroom for eight weeks lowered blood pressure as well as levels of triglycerides and cholesterol.

Maitake mushrooms are low in calories but contain a small chunk of protein and fiber, plus B vitamins, such as niacin and riboflavin, and beneficial beta glucan, which has immune-boosting effects.

One cup (about 70 grams) of maitake mushrooms contains approximately:

In addition to the nutrients listed above, maitake grifola also contains a small amount of zinc, manganese, selenium, pantothenic acid and vitamin B6.

Maitake vs. Other Mushrooms

Much like maitake, reishi mushrooms and shiitake mushrooms are both revered for their potent health-promoting properties. The reishi mushroom, for example, has shown to be therapeutic against cancer and reduce cardiovascular risk factors, such as high blood pressure and increased cholesterol levels.

Shiitake mushrooms, on the other hand, are thought to fight obesity, support immune function and reduce inflammation.

While reishi mushrooms are mostly found in supplement form, both shiitake and maitake are more commonly used in cooking.

Nutritionally speaking, shiitake and maitake are pretty similar. Gram for gram, maitakes are lower in calories and higher in protein, fiber, niacin and riboflavin than shiitake mushrooms.

Shiitake, however, contains a higher amount of copper, selenium and pantothenic acid. Both can be added to a balanced, well-rounded diet to take advantage of their respective nutrition profiles.

Grifola frondosa is in season between late August and early November and can be found growing at the base of oak, maple and elm trees. Be sure to select those that are young and firm, and always wash them off thoroughly before consuming.

If you’re not as well-versed in mushroom hunting and are wondering where to find maitake, you may need to venture beyond your local grocery store. Specialty stores or online retailers are your best bets for getting your hands on these tasty mushrooms. You can also find maitake D fraction extract in supplement form from many health food stores and pharmacies.

Of course, be sure to check the label carefully to prevent confusion with Grifola frondosa lookalikes, such as Laetiporus sulphureus, also known as chicken of the woods mushroom. Although these two mushrooms share similarities in their names and appearance, there are plenty of differences in taste and texture.

The maitake flavor is often described as strong and earthy. These mushrooms can be enjoyed in many different ways and can be added to everything from pasta dishes to noodle bowls and burgers.

Some people also enjoy roasting them until crisp with just a hint of grass-fed butter and a dash of seasoning for a simple yet delicious side dish. Like other mushroom varieties, such as cremini mushrooms, maitake mushrooms can also be stuffed, sautéd or even steeped into a tea.

There are plenty of ways to start enjoying the health benefits of these delicious mushrooms. They can be swapped into just about any recipe that calls for mushrooms or incorporated into main courses and side dishes alike.

Check out these Grifola frondosa recipes to get started:

If you notice any food allergy symptoms, such as hives, swelling or redness, after eating Grifola frondosa, discontinue use immediately, and consult with your doctor.

If you are taking medicine to lower your blood glucose, blood pressure or cholesterol levels, it’s best to discuss with your health care provider before taking maitake mushrooms to avoid interactions or side effects.

Additionally, if you are pregnant or breastfeeding, it’s best to stay on the safe side and limit your intake to prevent adverse symptoms, as the effects of maitake mushrooms (especially maitake D fraction drops) have not yet been studied in these populations.

Related: Is Mushroom Coffee Even Better than Regular Coffee?

While the name may make you smile and laugh with thoughts of ...
Read More
Dr. Axe on Facebook 22 Dr. Axe on Twitter 0 Dr. Axe on Instagram Dr. Axe on Google Plus Dr. Axe on Youtube Dr. Axe on Pintrest 22 Share on Email Print Article 22