The portobello mushroom is one of the most widely consumed mushrooms in the world. Among most other types of mushrooms, especially those called “medicinal mushrooms,” portobellos are known as natural cancer-fighters and protectors of the immune system.

Compared to more expensive and sometimes difficult-to-find mushrooms — like shiitakes or reiki mushrooms, for example — portobello mushrooms are widely available in most grocery stores and usually pretty cost-efficient.Whether you’re following a plant-based diet, low-carb diet, vegan diet or somewhere in between, there are lots of reasons why portobellos and other mushrooms should have a place on your plate.

Because they provide plant-based protein and many essential nutrients, in addition to disease-fighting antioxidants and phytonutrients, cooking with portobellos is one of the best ways to “crowd out” unhealthier foods in your diet — like processed red meat or difficult-to-digest soy, dairy and grain products. Plus, portobello mushroom benefits are truly remarkable, from combatting cancer and inflammation to providing valuable vitamins and minerals that boost health.

What Is a Portobello Mushroom?

Portobello mushrooms (also just called “portobellos”) are mature, white button mushrooms and a type of fungus. Not only are they very low in calories and a great substitute for meat in recipes, but portobellos are also a good source of phytochemicals, such as L-ergothioneine and conjugated linoleic acid (CLA) that have cancer-preventing properties and other anti-aging effects. Because they’re types of fungi, mushrooms scavenge organic matter, meaning they grow by absorbing nutrients from the ground and decaying matter, such as wood or even manure. This allows them to become very nutrient-dense, and when eaten by people, their nutrients then help to eliminate toxins from the body and scavenge free radicals that contribute to disease.

Where can you find portobello mushrooms? A variety of mushrooms — including those that go by the names portobello mushroom, white button mushroom, oyster mushroom and shiitake mushroom — are typically available in most major grocery stores. Health food stores usually have a greater variety of species available, including both fresh and dried mushrooms. Portobellos are normally sold fresh but appear differently in terms of size, smell and color depending on how mature they are.

What are the benefits of portobellos? Below are several reasons why mushrooms make an excellent addition to your diet:

The anticancer properties of mushroom extract is believed to be due to phytochemicals within mushrooms that have positive effects on cell death, growth and proliferation of healthy cells, lipid metabolism, and immune responses. Portobellos contain CLA, which has been shown to help inhibit cell proliferation and induce apoptosis (death of abnormal or cancerous cells). They are one of the only plant/non-meat sources of CLA, making them unique and valuable in vegetarian diets. (1)

One study that compared the effects of mushroom extract on mice found that those treated with the extract experienced reductions in prostate tumor size and tumor cell proliferation compared to the control group of mice that were not treated. (2) Researchers involved in the study found that mushroom extract containing CLA contributed to significant changes in gene expression that were observed in the mushroom-fed mice group but not the control group.

That CLA content, along with other phytonutrients, is why mushrooms like the portobello mushroom are considered some of the top cancer-fighting foods on the planet.

Mushrooms in general are one of the best dietary sources of L-ergothioneine (ERGO). Studies have found that low levels of ERGO are associated with higher risk for many chronic inflammatory diseases, especially those affecting red blood cells/hemoglobin.

According to researchers at Penn State University, ERGO is biosynthesized only by fungi and mycobacteria (not humans), making mushrooms one of the only ways that humans and animals consume any. In recent years, ERGO has been researched for its potential therapeutic effects in the treatment of red blood cell disorders that are caused in part by oxidative damage. Research also shows that as a very stable antioxidant with unique abilities, it may be helpful for counteracting damage to mitochondrial DNA and protecting against neurodegenerative diseases, especially Parkinson’s disease. (3)

Most people can afford to eat more meatless/vegetarian meals, including stir-fry, salads or casseroles that provide lots of veggies and nutrients. Mushrooms are a popular alternative for meat, with the added benefit of being lower in calories, fat, sodium, and free from dairy, nuts or soy.

If you follow a vegetarian or vegan diet, portobellos are one of the best foods to use in veggie burgers, fajitas, etc., since they can take on a similar texture and mouth-feel to meat and are also usually easy to digest. Unbeknown to most people, mushrooms are actually relatively high in protein considering they’re not a meat source. Most types contain about 20 percent protein based on their dried weight/mass. (4)

Even if you’re not following a plant-based diet but want to reduce the amount of meat you eat, try using portobellos as a substitute in place of processed tofu products, frozen veggie burgers (which commonly contain ingredients like soy protein isolate) or legumes/beans that can be hard for some people to digest properly.

4. Great Source of B Vitamins

For a vegetable, the portobello mushroom is exceptionally high in B vitamins, including niacin (vitamin B3) and riboflavin (vitamin B2). What are the health benefits of consuming foods high in B vitamins? B vitamins are needed to maintain high energy levels, cognitive health and help the body recover from stress. Niacin helps support functions of the cardiovascular system and a strong metabolism, including playing a role in keeping cholesterol and blood pressure levels in check.

Riboflavin is helpful for preventing or treating headaches and migraines, may lower PMS symptoms, protects the eyes from diseases like glaucoma, and helps prevent anemia. B vitamins also support healthy skin, are beneficial for preventing diabetes by helping to maintain normal blood sugar levels, and may help beat fatigue, joint pains and arthritis.

Copper is a trace mineral found in portobellos that plays an important role in the production of hemoglobin and red blood cells, supports a healthy metabolism, and is needed for growth, development and ongoing connective tissue repair. The body uses copper as part of various enzyme reactions and to maintain hormonal balance. Finally, copper helps prevent fatigue because it acts as a catalyst in the reduction of molecular oxygen to water, part of the chemical reaction that takes place when ATP (energy) is created within cells to fuel the body’s processes.

Selenium is another nutrient that portobellos supply high amounts of (over 30 percent of your daily requirement in one serving). Selenium supports activities of the thyroid gland by acting as a catalyst for the production of active thyroid hormones, helps fight inflammation, is beneficial for circulation and reproductive health, and may even help lower someone’s risk of developing cancer.

6. Low in Carbs but Still Provides Some Fiber

If you’re following a low-carb diet, or even a very low-carb keto diet, mushrooms can really come in handy for bulking up your meals and adding fiber, flavor and nutrients to your diet without supplying any sugar or too many carbs. One serving of portobellos has about three to six grams of carbohydrates (depending on the size and specific type) but only about two to three grams of net carbs when fiber is taken into account. For very little calories, you can add portobello mushroom to meals like omelettes, salads, soups or stir-fries in order to help you feel fuller and obtain to some fiber and electrolytes like potassium.

Most people think of portobello mushrooms as large mushroom “caps,” which can grow as large as roughly the size of someone’s hand. The caps usually have a white-gray flesh on the underside of the mushroom where the thick stem is found and a darker, firmer top. Portobellos are classified as basidiomycete mushrooms, and they typically come in two colors: white and brown. When the mushrooms are “immature,” they’re usually smaller, round and white to whitish-brown. Once they mature, they usually become darker in color, typically medium to very dark brown, and much bigger.

Like other mushrooms, portobellos are a good source of amino acids (the “building blocks of proteins”), dietary fiber, B vitamins and many essential minerals. Among different types of vegetables, they’re one of the best ways to get more B vitamins in your diet (even without eating meat), including thiamine, riboflavin, niacin and biotin. They also contain some selenium, copper, phosphorus and electrolytes like potassium. At the same time, they’re low-carb, meat-free (vegan), gluten-free, soy-free, nut-free, and very low in fat, sodium and calories, making them suitable for many different types of diets.

One cup (121 grams) of sliced, grilled portobello mushrooms contains about: (5)

Portobellos usually only contain very small amounts of vitamin D (around 0.2 micrograms, 8 IU). However, the concentration of vitamin D (due to the compound called ergocalciferol, which can be converted to vitamin D2) becomes much higher when mushrooms are exposed to UV light from either the sun or special growing lamps. There’s debate over how much vitamin D mushrooms can actually provide, especially considering that it’s still difficult for many to find mushrooms that have been exposed to UV light. However, research shows that mushrooms are unique among vegetables due to being capable of doubling or tripling their vitamin D content within just a few short hours of light exposure. (6) 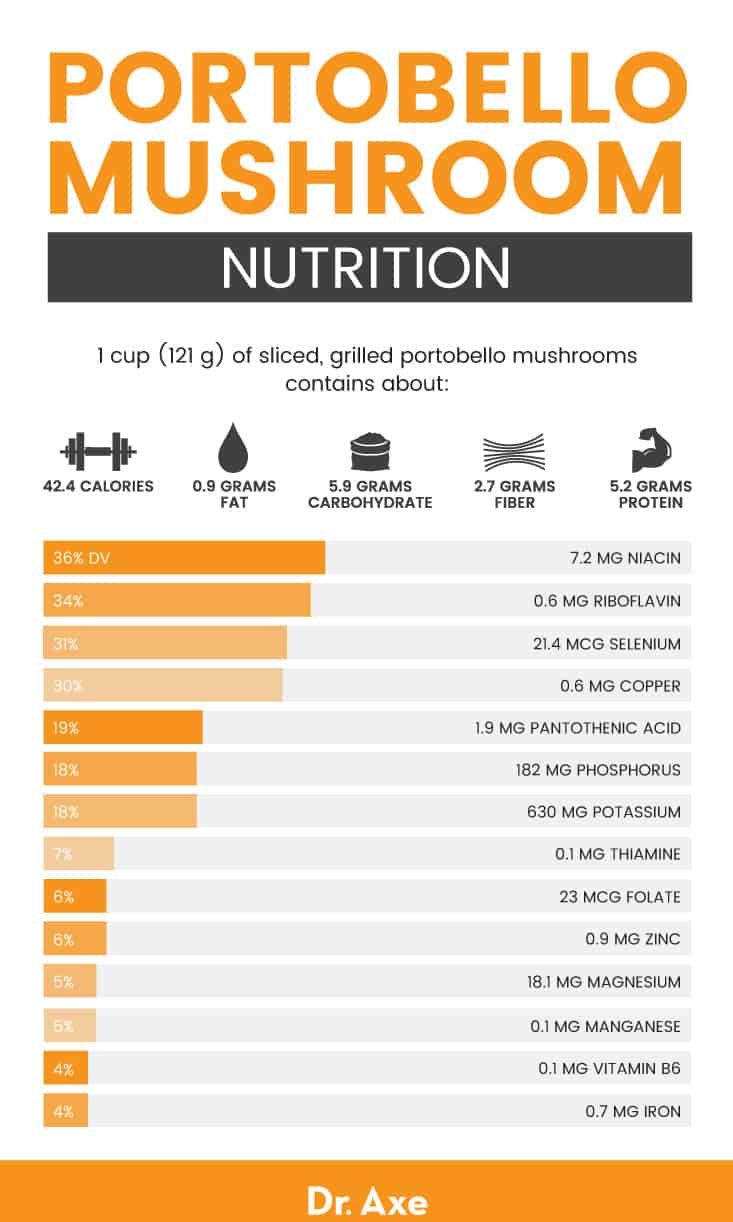 Portobello Mushroom vs. Other Mushrooms

When shopping for portobellos, look for mushrooms that are firm, solid, free from tears, and not shriveled or slippery-looking. You can also sniff the mushrooms to tell if they’re fresh, looking for those with an “earthy smell.” (7)

First remove the thick stem from the underneath of your mushroom caps (if they have them). Mushrooms absorb a high amount of water, which means it’s best not to rinse them in much water or soak them in an attempt to clean off any dirt. To remove any residue from the surface of mushrooms try using a damp cloth, rag or strong paper towel. Gently rub the mushrooms to clean them up, being careful not to rub too hard as this can cause them to start breaking. Once you’re done cleaning the mushrooms, pat them with a dry cloth or paper towel to let them dry — this way they don’t become overly soggy when you cook or prepare them.

There are lots of different ways to cook mushrooms depending on how much time you have and the type of recipe you’re making. Here are some suggestions:

While they’re not commonly a problem for most people, portobello mushrooms contain purines that are linked to health problems in some cases. Purines break down to form uric acid, which can accumulate and lead to conditions like gout or kidney stones and kidney dysfunction. If you struggle with one of these conditions, avoid mushrooms and other sources of purines, or only eat them in moderation.

If you’ve ever had an allergic reaction to other types of mushrooms, it’s best to use caution when eating portobellos, especially since they’re related to other edible mushrooms and can cause similar effects.

Read Next: Chaga Mushroom: 5 Health Benefits of This Ancient Medicine

Used for well over 2,000 years, triphala is a staple of Ayurvedic ...
Read More
Dr. Axe on Facebook 5 Dr. Axe on Twitter 22 Dr. Axe on Instagram Dr. Axe on Google Plus Dr. Axe on Youtube Dr. Axe on Pintrest 12 Share on Email Print Article 39