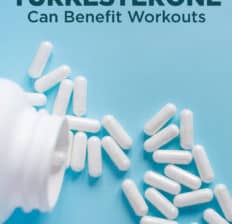 If you’re someone who works out regularly, enjoys strength training or even competes athletically, then a supplement that decreases fatigue and speeds up exercise recovery probably sounds pretty appealing. One such supplement that is growing in popularity among s bodybuilders and athletes is turkesterone, a type of natural steroid compound that is linked improved strength, fat burning, muscle building and energy.

What is turkesterone made from? Turkesterone is a concentrated type of ecdysteroid (also called a phytoecdysteroid), a compound that is naturally found in some insects and plants.

Ecdysteroids have anabolic and adaptogenic effects, so they’re isolated and used to make supplements that are taken for purposes such as to boost muscle growth and athletic performance.

What foods contain turkesterone? While some ecdysteroids are found in foods like spinach, quinoa and yams, turkesterone is not abundant in any common foods.

Instead, it naturally occurs in thistle-like plants, most of which grow in Central Asia, such as places like Siberia, Asia, Bulgaria and Kazakhstan. Plants that it’s commonly extracted from include those called leuzea or maral root and Ajuga turkestanica.

Compared to other types of ecdysteroid supplements, such as ecdysterone, studies suggest that turkesterone seems to be a bit more potent, especially in regard to its anabolic (muscle-building) effects. It’s also pricier than ecdysterone, which is why some people prefer to use ecdysterone in its place.

Is turkesterone a steroid?

Ecdysteroids are naturally occurring steroids that have a similar chemical structure to androgens, including the “male reproductive hormone” testosterone (although women produce some testosterone too). This means they can have some of the same effects as testosterone when it comes to promoting muscle growth.

Turkesterone is not considered to be an artificial hormone, and it’s not used for hormone replacement therapy like some other hormone medications are.

When it comes to putting on lean muscle mass and building strength, how good is turkesterone? Here’s what research tells us about its potential benefits:

1. May Help You Put on Muscle Mass

There’s evidence that turkesterone can help increase muscle growth and one’s muscle-to-fat ratio, thereby improving body composition. It may also have some anti-obesity and metabolic-boosting effects, according to certain animal studies.

It seems to do this by lowering lipid absorption, possibly shifting glucose metabolism and fighting insulin resistance, and supporting muscle synthesis in several ways, such as by boosting uptake of the amino acid leucine in muscle cells.

Ecdysteroids can increase ATP synthesis, which helps power muscles, improve endurance and prevent feelings of fatigue. This can translate to more intense workouts and help with building strength and stamina.

There’s lots of anecdotal evidence from users of edystreoids that they help improve one’s ability to lift more and recovery more easily after tough workouts.

3. Can Assist in Muscle/Exercise Recovery

Studies show that turkesterone can help repair muscle fibers that have been broken down after exercise and increase glycogen concentrations in muscles, which can help remove lactic acid and support workout recovery. Additionally, it’s thought to help maintain a positive nitrogen balance, which facilitates muscle growth.

Turkesterone is considered an adaptogen, much like ashwagandha or rhodiola. It supports mental health by helping the body cope with stress and fatigue.

Some find that it improves sleep and reduces anxiety, brain fog, feelings of “burnout” and low motivation, which can be a symptom of depression.

Mechanisms of action are thought to include its ability to support neurotransmitter production and assist in gut health, which helps promote a healthy “gut-brain connection.”

It may also help fight inflammation, boost antioxidant status, and improve digestion and immune function, as immunity is compromised when someone is under a lot of stressed and fatigued. Additionally, some evidence suggests it has some hepatoprotective and cardioprotective effects, meaning it supports liver and heart health in part by lowering cholesterol and blood glucose levels.

Turkesterone and other ecdysteroids are thought to be safer overall than anabolic steroids, mostly because they don’t bind to androgen receptors, which can cause side effects. This means they are unlikely to cause any serious steroidal side effects, such as changes in appetite, mood, libido, hair growth, skin health or sleep.

That said, there are potential turkesterone side effects to be aware of, which can include nausea, upset stomach, lightheadedness and other digestive issues. To avoid these side effects, don’t take it on an empty stomach, and always follow dosage recommendations.

Is it legal to use ecdysteroids such as turkesterone?

Yes, you can purchase this product in stores and online, sometimes it listed as ajuga turkestanica extract. It won’t show up on a drug test and is legally used by some athletes and bodybuilders.

In the U.S., ecdysteroids are currently not banned or treated like anabolic/artificial steroids, however some are on the World Anti-Doping Agency (WADA) 2021 “Monitoring Program List.” This means WADA intends to gather more information about these substance to determine if they should be prohibited by competitive athletes or not in the future.

A general recommendation is to begin taking a turkesterone supplement in dosages of 500 milligrams per day, typically in two divided doses. This amount should be taken for eight to 12 weeks (about two to three months) initially, before taking a break.

Because it shouldn’t cause dependence, most people can usually take turkesterone on and off for long periods of time, unlike other steroid drugs. It has the advantage over anabolic steroids of not requiring post cycle therapy, which is used to help balance hormones.

When purchasing turkesterone supplements (or ajuga turkestanica extract), be sure to check the yield amount of the active ingredient. This ensures you’re taking a potent and pure product.

Look for capsules or extracts containing about 95% turkesterone. As of 2021, turkesterone is an expensive supplement to produce and purchase, but manufactures believe that in the coming years technological advances should allow for the price to come down.