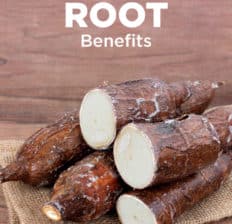 Rich in calories, carbohydrates and vitamin C, plus highly versatile and full of flavor, yucca root is an important dietary component for millions around the world. It can be mashed, boiled, baked or fried and swapped in for potatoes in just about any recipe.

It’s also used to make a variety of gluten-free flours and food thickeners, such as arrowroot, tapioca and cassava flour.

With its wide range of micronutrients and antioxidants, adding yucca root into your diet can come with a long list of potential health benefits. Here’s what you need to know about this tasty root vegetable and how it can impact your health.

What Is Yucca Root?

Yucca, also known as cassava, yuca, Brazilian arrowroot or Manihot esculenta, is a type of shrub native to South America. It is often cultivated in tropical regions for its starchy root, which is considered a dietary staple for an estimated half billion people around the world. In fact, after corn and maize, yucca root is considered the third largest source of carbohydrates in the tropics.

Available in both bitter and sweet varieties, the yucca root taste is often compared to potatoes, and it also has a stringy texture reminiscent of pumpkin. It’s usually boiled, fried or ground up into different flours and powders used for baking.

Keep in mind that yucca root is unrelated to the yucca plant, which is a genus of perennial shrubs and trees that produces white yucca flower clusters as well as yucca fruit. Many of these plants are used medicinally and also consumed in many different dishes.

Some of the common types of yucca plants include:

Yucca is high in antioxidants, which are beneficial compounds that neutralize free radicals to prevent oxidative stress and damage to your cells. Research suggests that antioxidants play a central role in overall health and may be protective against many chronic conditions, including cancer, diabetes and heart disease.

Another in vitro study out of Italy found that manganese was significantly more effective than several other nutrients at scavenging free radicals and preventing oxidative stress.

There’s no doubt that maintaining a strong immune system is key to overall health. Your immune system is responsible for warding off foreign invaders and keeping harmful bacteria, viruses and fungi out of the body to protect against illness and infection.

A top vitamin C food and loaded with beneficial antioxidants, adding yucca into your diet is a simple way to give your immune system a healthy boost. In fact, one study published in the Annals of Nutrition & Metabolism showed that getting enough vitamin C was able to reduce symptoms and shorten the duration of respiratory infections like the common cold.

It’s also been shown to improve outcomes for conditions like pneumonia, malaria and diarrhea infections.

Yucca root is a common ingredient found in many natural skin care routines. The peel can be used to exfoliate the skin and remove dead skin cells while the roots can be mixed with honey or olive oil and applied as a skin mask to brighten the complexion.

Even consuming yucca root in your favorite recipes can help keep your skin glowing. It’s packed with vitamin C, a nutrient involved in the synthesis of collagen that is believed to have anti-aging properties.

Vitamin C can also protect against sun damage by scavenging harmful free radicals and has even been shown to suppress melanin production to aid in the prevention of dark spots and hyperpigmentation.

Arthritis is a condition characterized by painful swelling and stiffness in the joints. Thanks to its rich content of both antioxidants and manganese, incorporating yucca root into your diet may be especially useful in providing relief from rheumatoid arthritis symptoms.

Manganese is often recommended as a natural remedy for arthritis, and one study published in the American Journal of Epidemiology even showed that manganese supplementation was associated with a lower risk of rheumatoid arthritis in older women.

5. Has a Low Glycemic Index

For this reason, yucca is often considered a “good carb” and may be a better alternative to many other carbohydrates when it comes to blood sugar control.

Of course, keep in mind that yucca is still high in carbohydrates. If you have diabetes or are on a carb-controlled diet, it’s best to include this starchy vegetable only in moderation and pair it with plenty of healthy fats and proteins to help maintain normal blood sugar levels.

Yucca root is high in calories and carbohydrates, but it also contains a good chunk of the fiber, vitamin C and manganese that you need in a day.

One cup (about 206 grams) of yucca root contains approximately:

Vs. Yams and Cassava

What’s the difference between these common root vegetables? Yucca root and cassava are actually the same plant, but the terms “yucca root” or “yuca” are more commonly used in the U.S. and in Spanish. Yams, on the other hand, are another type of edible tuber but actually belong to an entirely different genus of plants.

While yucca is native to South America, yams are actually widely grown across Asia, Africa and the Americas. They have a rough skin that softens when heated, and they can range in color from dark brown to pink. They can be prepared similarly to yucca and can be swapped in place of potatoes and boiled, mashed or baked in a variety of recipes.

Gram for gram in terms of nutrition, yams are lower in calories and carbohydrates but also contain nearly double the fiber as yucca. They are slightly lower in vitamin C but contain a higher amount of other nutrients, such as vitamin B6 and potassium.

You can usually find yucca in the produce section of your local grocery store, right alongside other tubers, such as sweet potatoes and yams. In some cases, you may need to expand your search and check out some Latin or Asian specialty markets to find it.

It can also sometimes be found pre-peeled and cut in the freezer section as well. Be sure to look for it under its other names, such as yuca or cassava.

Wondering how to cook yucca to take advantage of the multitude of health benefits it has to offer? There are plenty of delicious yucca recipes out there, from soups and stews to custards and cakes.

It can be used in many of the same ways as regular potatoes. Fried yucca is often used to make yucca root fries, chips or fritters, but it can also boiled and mashed for a healthier twist on mashed potatoes.

In addition to fresh yucca, you can also easily find cassava flour, which is made from yucca root powder, in the baking section of most grocery stores. This popular gluten-free alternative to regular flour works great for baked goods, such as cookies, cakes, brownies and crepes.

Tapioca flour (or tapioca starch) is another type of flour made from yucca, but it’s made from starch of the root while cassava flour is made from the entire root. Tapioca flour works well for thickening liquids and making homemade puddings.

Arrowroot is another popular ingredient made from a blend of yucca with other roots, which is usually added to biscuits, jellies and broths.

Native to South America, it’s believed that yucca root was originally domesticated no more than 10,000 years ago, around the origins of human agriculture. However, the oldest evidence of yucca food is from approximately 1,400 years ago at Joya de Cerén, a Mayan farming community in El Salvador.

By 1492, yucca root was already a staple in the diets of the indigenous people of South America, Mesoamerica and the Caribbean and is often featured in many forms of indigenous art, from paintings to ceramics. Following the European occupation of these regions, consumption of yucca root became more widespread, and Cuba even began mass-producing cassava bread.

It was later introduced to other areas, such as Africa and Asia, by European traders and has since become an important ingredient around the world. Today, Nigeria tops the charts as one of the biggest producers of yucca root, followed by Nigeria, Thailand and Brazil.

Although not commonly used in holistic medicine, yucca root fits right into an Ayurvedic diet, which encourages eating with the seasons and filling your diet with plenty of fresh fruits and vegetables to support better health. Cooked root vegetables like yucca work especially well for those with vata doshas, as they are considered more heavy and anchoring.

Although yucca root offers plenty of nutrients and health benefits, it’s also high in calories and carbohydrates and should be consumed in moderation as part of a healthy diet. Add yucca root to your meals as a starch in place of potatoes or grains, but be sure to also pair it with plenty of non-starchy vegetables and healthy protein foods to balance your meal.

Additionally, proper preparation is key when consuming yucca root. The roots of the yucca plant contain a substance that can trigger the production of toxins, such as cyanide, when not processed correctly. Improper cooking can cause yucca root side effects, such as vomiting, stomach pain, dizziness and headaches.

Opt for sweet varieties over bitter whenever possible, and be sure to peel yucca, cut it and cook it thoroughly before enjoying. Some research also shows that soaking it for 48 to 60 hours before cooking can significantly cut down on the potential for toxicity.

Yucca root also contains antinutrients, which are compounds that can interfere with the absorption of certain vitamins and minerals. For most people who eat yucca root in moderation, this shouldn’t be a major concern, but it can increase the risk of nutritional deficiencies for populations who use it as a dietary staple.