Caffeine, regardless of the source, can be both a headache trigger or headache inhibitor. Caffeine withdrawal headaches, however, occur when someone normally dependent on caffeine (like one or more cups of coffee or tea a day) decides to skip out their usual caffeine routine.

You’re most susceptible to experiencing caffeine headaches and other withdrawal effects if you regularly consume large quantities of caffeine.

Coffee is the caffeinated drink that’s responsible for the majority of caffeine headaches, and that makes sense, considering it’s one of the most highly consumed beverages in the world following water and tea. But you can also experience headaches if you quit using energy drinks, soda or some caffeine-containing medications.

If a headache sets in after skipping caffeine but your symptoms start to subside after having some caffeine, this is a good indication that you’re experiencing caffeine withdrawal (also called “caffeine rebound”). Withdrawal symptoms typically begin within 12 to 24 hours after stopping caffeine.

Some of the most common caffeine withdrawal symptoms include:

What’s happening in the body when someone’s going through caffeine withdrawal?

Caffeine impacts the way your brain and body work in a number of ways. The chemical caffeine is considered a stimulant of the methylxanthine class of psychoactive drugs. It affects the central nervous system (CNS) and has other effects including elevating your heart rate, altering blood flow, increasing alertness and decreasing fatigue.

One reason why quitting caffeine causes headaches is because of caffeine’s “vasoconstrictive” properties. Caffeine narrows the blood vessels that surround your brain, but when you stop using it, the blood vessels expand again, triggering pain since your body needs time to adjust.

Caffeine abstinence also produces changes in certain brain wave rhythms linked to increased fatigue. It also allows a chemical called adenosine to accumulate in the body. Adenosine is involved in energy metabolism and is responsible for making you feel sleepy.

Does caffeine ever help headaches?

According to the American Migraine Foundation, “Caffeine is often cited as a headache trigger, but for some people with migraines, a cup of coffee can offer some relief in the midst of an attack.” In fact, a number of popular over-the-counter headache medications contain caffeine as a key active ingredient.

Caffeine itself may temporarily help reduce headache pain in some people, but it doesn’t address the underlying causes of headaches, and therefore isn’t a good long-term solution.

Using meds that contain caffeine can also cause dependence, which means over time you’ll need more to feel the same relief.

How Long Do Caffeine Headaches Last?

Research gathered by the team at Caffeine Informer suggests that caffeine headaches typically last a few days to two weeks for most consumers.

However, among those that consume lots of caffeine very regularly — such as 1,000 milligrams or more daily — symptoms can linger for 2 months or more.

How Much Caffeine Is Too Much?

The effects of caffeine vary from person to person. Some people can periodically enjoy one or more sources of caffeine, and then skip out on caffeine other days, without experiencing any headaches. Others are more sensitive and susceptible to the effects of withdrawal. It’s still possible to develop negative symptoms when quitting caffeine even if you only consumed it for a few days in a row.

If you know that you tend to experience headaches easily and somewhat frequently, experts recommend either avoiding all caffeine or limiting your caffeine intake to one or two beverages daily.

This amount is roughly equivalent to 200 milligrams of caffeine, or about 2 regular-size cups of coffee.

When it comes to coffee consumption specifically, most research suggest that adults consume no more than about 3 - to 4 cups a day. This amount is considered a “moderate caffeine intake” and provides about 300  to 400 milligrams a day of caffeine. Other research suggests that more coffee, up to 5 or 6 cups, is even okay — as long as it doesn’t interfere with quality of life.

Below is a list of the most common sources of caffeine that can wind up contributing to withdrawal effects, according to the National Headache Foundation:

How to Get Rid of a Caffeine Headache

It can be hard quitting caffeine; in fact, studies show that more than 90 percent of people with caffeine dependence struggle to quit due to side effects. That doesn’t mean it can’t be done, you just need to have patience and should expect your body to take time to adjust.

Tips for Cutting Back — or Weaning Off of — Caffeine: 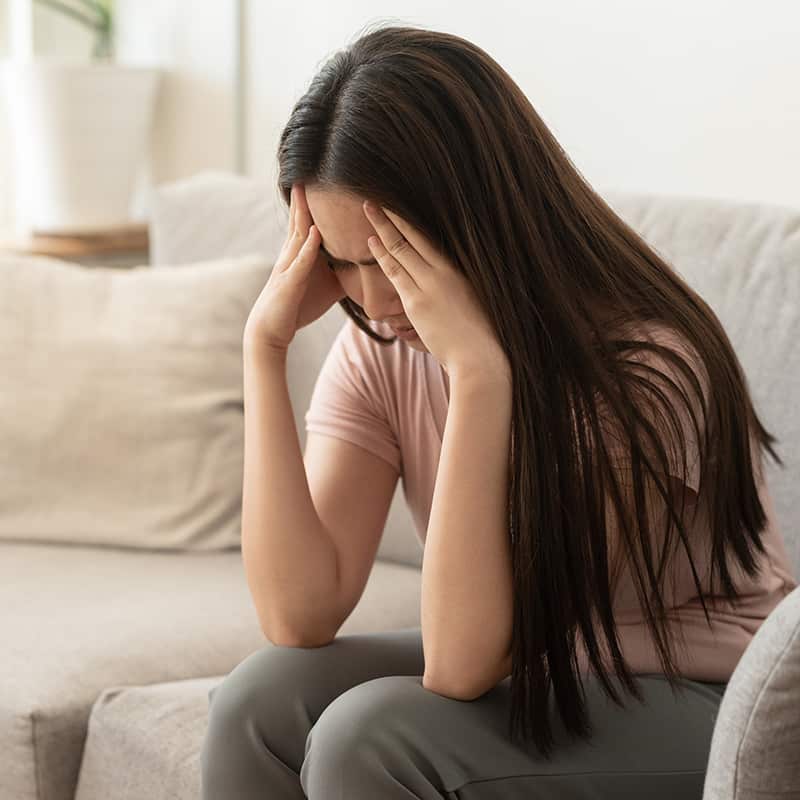 If you want to avoid caffeine headaches, one of the best things to do is nix your dependence on high-caffeine drinks and sources. Try these alternatives instead: