Dizziness is one of the most common complaints health care workers hear from their patients. It’s actually said to be the third most common symptom reported during outpatient visits with 42 percent of adults complaining of it at some point. (1)

If you’re waking up dizzy, feeling dizziness when standing up or experiencing sudden dizziness, all of these variations on dizzy spells are not fun and can be very disorienting to the say the least. Sometimes it can be caused by something as simple as dehydration. Others times, it can be one of the signs of something more serious such as heart disease. (2)

Dizziness is a symptom, not a medical diagnosis. And it’s a symptom that is often accompanied by other symptoms such as lightheadedness. What can cause dizziness? The list of possibilities is long, but I’m about to tell you many of them. Can you help your dizziness using natural remedies? If nothing really serious is causing it, then I can tell you how to get rid of dizziness naturally.

According to the Mayo Clinic, dizziness is a term used to describe a range of sensations including feeling faint, woozy, weak or unsteady. (3) When dizziness makes you feel like you or your surroundings are spinning or moving this is medically referred to as vertigo.

Dizziness is a symptom that can be caused by dozens of other health problems. The possible causes  fall into several categories, including cardiac, neurologic, obstetric or gynecologic, and ear/nose/throat-related. Dizziness is often accompanied by other symptoms, too, such as headache, nausea or feeling lightheaded and dizzy.

Dizziness can last for just a few seconds, minutes, hours or even months. It’s a symptom that can be complex and it’s not always related to the vestibular (inner ear) system. Sometimes it is a sign of something more serious (more on that in the “causes” section below).

What are the symptoms of dizziness? When people say they are feeling dizzy then they are describing a perceived sensation of movement like rocking, spinning or whirling even though they are not actually moving. Sometimes, when someone says they are dizzy, it feels as though the room is moving around them.

Since dizziness is frequently a multicomponent symptom it is sometimes medically divided by the following accompanying symptoms: (1)

Many times dizziness is accompanied by other symptoms including: (4) There are at least over 80 possible causes of dizziness. Here are some of the top known causes: (5)

Again, these are just some of the possible causes of dizziness. Other common causes that don’t fit into these categories include:

If you’re feeling dizzy and are currently taking medication, make sure you thoroughly read the possible side effects of your medication. (6)

Dizziness can also be a side effect of some tools used to quit smoking such as the nicotine patch and nicotine gum.

Risk factors for dizziness include, but are not limited to, the following: head or ear trauma, viral ear infections and age. Anyone of any age can feel dizzy, but this complaint is heard more and more as people get older and is the top symptom behind medical visits for people over the age of 75. (1)

If you go to your doctor for dizziness, you’ll likely be asked about your symptoms, if you currently have any medical condition(s), and any medication use. Your doctor will also perform an exam, which will include evaluating how you walk (known as gait) since this can say a lot about your balance and the state of your central nervous system.

If your doctor thinks anything serious such as a stroke is causing your dizziness and/or lightheadedness, then an MRI or CT will likely be conducted right away. If you recently hit your head or if you’re older in age, one of these tests is also likely.

You may also need a hearing test and balance tests, including eye movement testing, head movement testing, rotary-chair testing and posturography. Blood tests may also be requested to see if you have an infection. If a cardiac cause is suspected, then other tests to evaluate heart and blood vessel function will likely be ordered.

According to the Mayo Clinic:

Dizziness often gets better without treatment. Within a couple of weeks, the body usually adapts to whatever is causing it. If you seek treatment, your doctor will base it on the cause of your condition and your symptoms. It may include medications and balance exercises. Even if no cause is found or if your dizziness persists, prescription drugs and other treatments may make your symptoms more manageable. (7)

Medications that are conventionally used to treat dizziness include diuretics (water pills), antihistamines (both prescribed and over-the-counter), and anticholinergics. 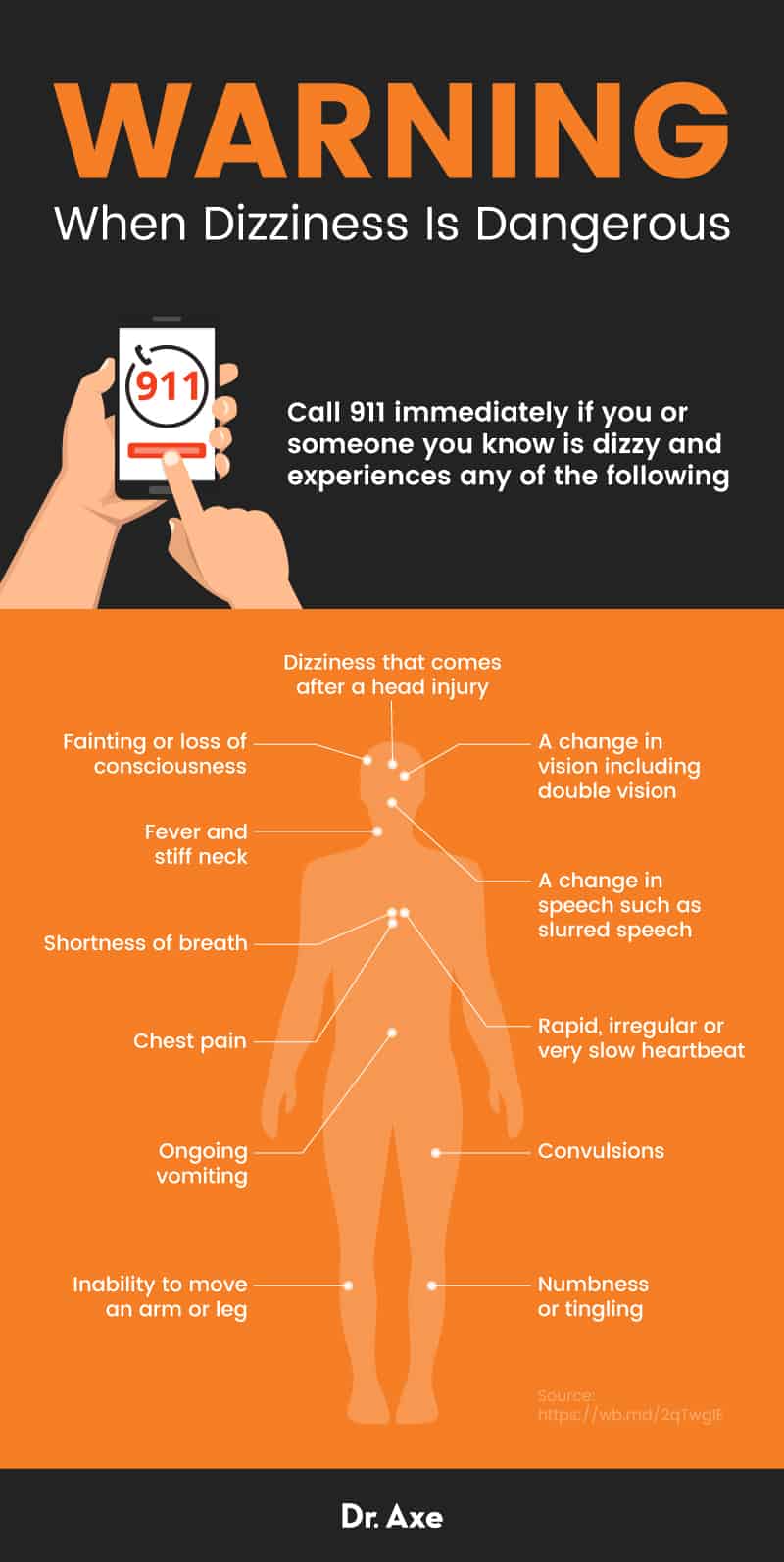 Wondering how to stop feeling dizzy naturally? Treatment can depend upon the root cause, but generally speaking, the following natural treatments have been known to help. Of course, if dizziness is accompanied by other serious symptoms such as chest pain, call 911 and seek urgent medical care.

If you begin to feel dizzy, lying down right away can really help. If you are having severe dizzy spells related to vertigo, it can also help to keep your eyes shut while you are lying down. If your symptoms are related to being dehydrated, then have a hydrating drink like coconut water. If you’re overheated, then move into a cooler area as soon as possible whether that means moving into the shade outdoors or getting into a cooler indoor space. (6)

Acupuncture is a holistic health technique that stems from Traditional Chinese Medicine (TCM) practices in which trained practitioners stimulate specific points on the body by inserting thin needles into the skin. The goal of a pilot cohort clinical study published in the journal BMC Complementary and Alternative Medicine was to evaluate how safe and effective the use of acupuncture was in treating patients with dizziness and vertigo in the emergency room. There were 60 subjects divided into one of two self-selected groups: the acupuncture group or the control group. None of the subjects had any life-threatening conditions or central nervous system disorders.

3. Cut Back on Caffeine and Alcohol

If your dizziness is inner ear-related, then it can be helpful to cut back on caffeine and alcohol. Sources of caffeine include coffee, tea and sodas. In small amounts, organic coffee, tea and red wine are high in antioxidants and have many possible health benefits. However, in large amounts, caffeine and alcohol are both known to have negative effects on the circulatory system. In fact, dizziness is a known side effect of caffeine overdose.  (9)

Similarly, too much alcohol can also be a cause of dizziness. When you drink alcohol, the portion of your brain that is responsible for balance — the cerebellum — is directly affected. Dizziness can therefore occur while drinking. In addition, dizziness or vertigo is known to occur during a hangover. So it’s best not to overindulge in any sources of caffeine and alcohol to prevent and improve dizziness.

Did you know that one of the symptoms of a B12 deficiency is dizziness? It’s true! (10) So make sure to have your B12 levels checked if you’re struggling with feeling dizzy. To get more B12 in your diet there are a lot of delicious and healthy foods you can eat. Some of the best sources of B12 include sardines, grass-fed beef, wild-caught salmon, feta cheese, cottage cheese, and eggs.

5. De-Stress and Seek Help if Needed

Is there a health concern or symptom that reducing stress can’t help? It’s hard to find one. Anxiety and stress are known to contribute to feelings of dizziness, so make sure that you are doing everything you can to lower your stress level regularly, ideally daily. Feeling anxious can bring on dizziness and feeling dizzy can also cause anxiety and stress in the mind and body. This is why it’s important to find activities that you enjoy that can encourage a calm state and practice them on a regular basis.

Some of my favorite natural stress relievers include exercise, journaling and prayer. Counseling and cognitive behavioral therapy are other great options that involve trained professionals helping you to learn how to better manage stress.

If you’re assisting someone who is dizzy, have them sit down or lie down. Make sure to avoid sudden position changes and bright lights as much as possible. If the individual is thirsty, you can give them fluids.

Call 911 immediately if you or someone you know is dizzy and experiences any of the following: (12)