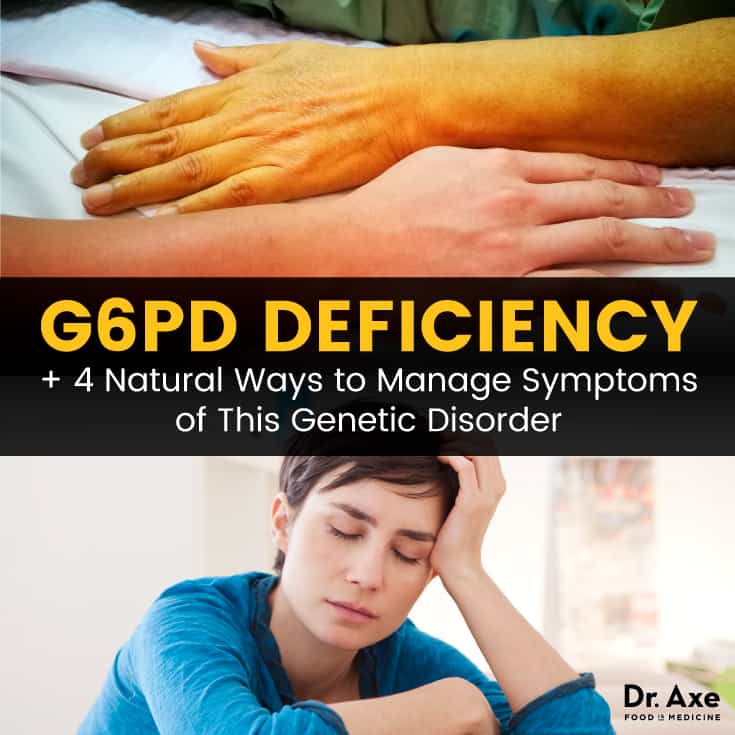 Worldwide, it’s estimated that around 400 million people have the genetic disorder called glucose-6-phosphate dehydrogenase deficiency. G6PD deficiency almost always occurs in males and is most likely to affect people from parts of Africa, Asia, the Mediterranean, or the Middle East. In the U.S., about 1 in every 10 African-American males has the defective gene that causes G6PD deficiency. (1)

While many people with G6PD deficiency don’t have any symptoms at all and live a healthy life, some have more severe cases. When they do occur, symptoms can include those tied to anemia, such as weakness and fatigue. By avoiding certain problematic foods and drugs — in addition to supporting the immune system in other ways — people with G6PD can greatly help to lower their risk for complications.

What Is G6PD Deficiency?

G6PDs stands for glucose-6-phosphate dehydrogenase. G6PD deficiency is a genetic disorder that affects an erythrocyte (red blood cell) enzyme and may contribute to anemia. The severe form of the deficiency is called favism, which causes more symptoms and poses more risks than other types of G6PD deficiency.

Those with G6PD deficiency can experience increased hemolysis, or destruction of red blood cells, due to a defect in the glucose-6-phosphate enzyme. This interferes with the ability of red blood cells to bring oxygen throughout the body to tissues, causing a variety of symptoms related to anemia — such as weakness, fatigue and others.

There are more than 400 genetic variants of the G6PD deficiency that have been identified. But just because someone inherits a genetic variant does not mean that they will become ill and deal with symptoms. It’s possible to be a “healthy carrier” and overall have a good quality of life. According to the G6PD Deficiency Organization website:

With G-6-PD deficiency you can have a perfectly normal life, provided you avoid the drugs and foodstuffs included in our To Avoid list. It is therefore of great importance to learn whether you, or your baby, suffer from the deficiency, so that you can watch your diet and drug intake, and warn your physician or pediatrician. (2)

Symptoms and signs of G6PD deficiency (most of which are due to hemolytic anemia) can include: (3)

As mentioned above, people who have G6PD deficiency develop hemolytic anemia, which, according to the U.S. Department of Health & Human Service’s Genetics Home Reference page, occurs when “red blood cells are destroyed faster than the body can replace them.” (4)  Anemia is defined as “a condition in which the body does not have enough healthy red blood cells.” (5) There are a number of different types of anemia depending on what’s causing it. When someone has hemolytic anemia their red blood cells, which are produced inside bone marrow, are destroyed more rapidly than usual. In people without anemia, this is normally about 120 days after they are produced.

Hemolytic anemia in people with G6PD deficiency is usually due to reactions caused by a bacterial or viral infection. It can also be due to side effects caused by taking certain medications or drugs, such as antibiotics or medications used to treat malaria.

Glucose-6-phosphate dehydrogenase deficiency is a genetic disorder — meaning it’s passed down from parents to their offspring — that is characterized by an enzyme defect due to a mutated G6PD gene. The G6PD gene provides instructions for making the glucose-6-phosphate dehydrogenase enzyme, which helps protect red blood cells from damage due to reactive oxygen species (a type of free radical) and destruction. The same enzyme also helps the body to process and use glucose from carbohydrates. It’s needed to help turn carbohydrates obtained from the person’s diet into usable energy, which is why the deficiency and anemia are linked with symptoms like fatigue.

Due to the inheritance pattern of G6PD, the condition is much more likely to affect males compared to females. G6PD is inherited in an “X-linked recessive pattern,” meaning the gene associated with the condition is located on the X chromosome, of which males have only one copy. Because males have only one X chromosome, but females have two, a male has a higher chance of developing G6PD. This is because he only has to inherit one copy of the defective gene from either parent, instead of two. Sons who have mothers who were either G6PD deficient, or were “healthy carriers” of the mutation (the mom does not display symptoms), are most likely to inherit the condition themselves. (6)

If G6PD deficiency runs in your family, you can determine whether or not you carry the gene by having a blood test done. In order to determine the specific variant of the gene mutation that you have, you can visit a specialized genetic lab. People of African or Mediterranean heritage are most likely to be carriers or to have the mutation, including those of Italian, Greek, Arabic, and Sephardic Jewish backgrounds. Once the deficiency is confirmed, it’s important to avoid consumption of foods or drugs that can cause a serious reaction, called a hemolytic crisis.

For most people who do not have a severe case of G6PD deficiency, simply avoiding problematic drugs, ingredients and foods will be enough to prevent any serious symptoms. When symptoms do occur, the symptoms will usually disappear within several weeks once the trigger is removed. As the body naturally makes new red blood cells and recovers, the anemia symptoms will improve and no further treatment should be needed. 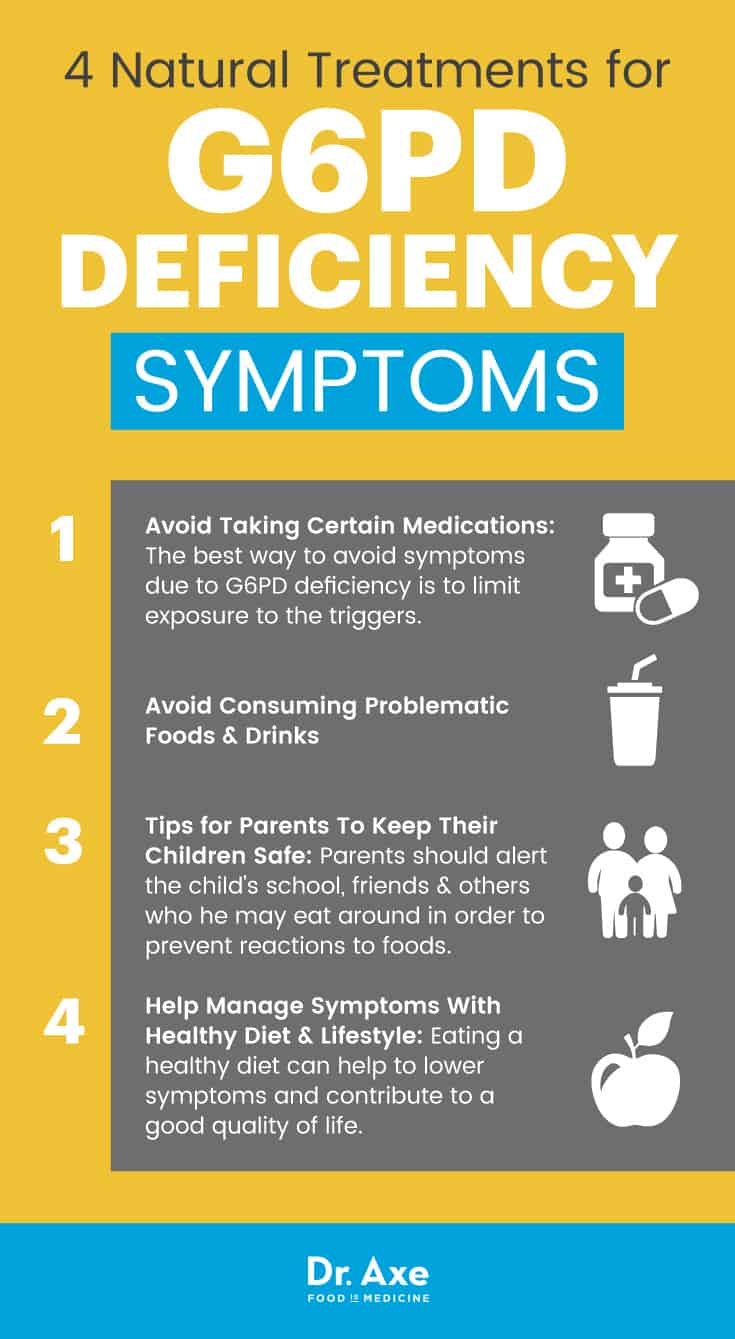 The best way to avoid symptoms due to G6PD deficiency is to limit exposure to the triggers. It’s very important for people with G6PD deficiency to avoid taking a number of “high risk”medications, which can potentially cause severe reactions. A complete list of “Unsafe To Take” drugs can be found here on the G6PD Deficiency Organization’s website. Some of the drugs mentioned on the “avoid” list include:

Although it’s not a drug, the chemical celled naphthalene, which is found in mothballs and moth crystals, should also be avoided.

Whenever someone with G6PD deficiency is visiting a doctor, they should alert them of their condition in order to avoid being prescribed a risky medication. It’s recommended that people with G6PD deficiency give their health care providers a copy of the “Unsafe To Take” list and discuss any vitamins or supplements with their doctor as well.

Because there are more than 400 types of mutations of the G6PD deficiency, each person with the condition can react differently to eating certain foods. Not everyone with the deficiency will experience reactions to foods like fava beans or  other legumes, but others with a more severe case will. Avoid these foods:

3. Tips for Parents To Keep Their Children Safe

When a child has G6PD deficiency, parents should alert the child’s school, friends and others who he may eat around in order to prevent reactions to problematic foods. It’s possible for children to eat something “prohibited” without realizing it when they are not under their parents’ supervision (such as at school, camp, a friend’s house, sports game, etc.). Your child can carry a copy of the “G6PD Avoid List” in their school bag in order to have a list on hand at all times to share with other adults.

Eating a healthy diet and making other lifestyle changes won’t treat or cure G6PD deficiency, considering it’s an inherited condition, but it can help to lower symptoms and contribute to a good quality of life. Below are some tips for dealing with hemolytic anemia symptoms:

Some people with G6PD deficiency may experience a hemolytic crisis, in which symptoms come on suddenly and may be severe. If you experience signs like a rapid change in body temperature, heart rate, skin color and breathing then see a doctor right away or visit the emergency room. Your health care provider will likely review your symptoms and ask about any recent drugs or problematic foods you’ve eaten. Get help right away if you suspect a food or drug has triggered symptoms in order to prevent complications from occurring.

Read Next: 23andMe: Should You Get This New Genetic Test?