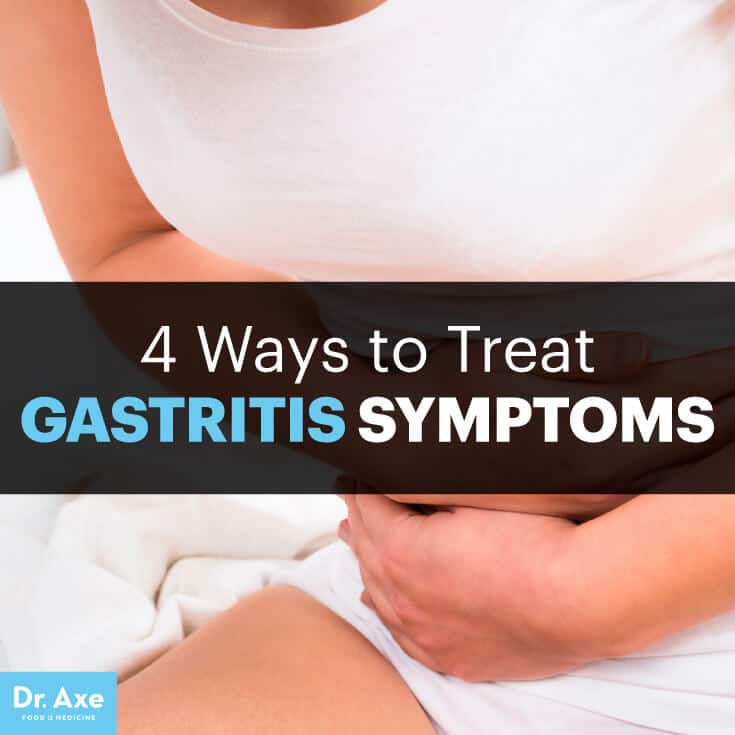 Symptoms of this uncomfortable condition account for more than 2 million visits to the doctor each year in the U.S. alone. This is because gastritis symptoms can wreak all kinds of havoc on people’s digestive tracts, leaving them in all sorts of pain and discomfort.

What is gastritis, you ask? It’s an uncomfortable digestive problem caused by stomach inflammation and erosion of the lining of the stomach (called the gastric mucosa). Some people use the terms indigestion and gastritis interchangeably, since both cause similar symptoms. However, while it’s normal to experience occasional indigestion or an upset stomach from time to time, a diagnosis of gastritis is made when tests reveal that someone has marked inflammation of the stomach or persistent gastritis symptoms.

Not every person with gastritis experiences any symptoms at all, but many people do. It’s common for gastritis patients to suffer frequent episodes of stomach pains, bloated stomach, burning and other pains. People can experience gastritis symptoms both short term (acute gastritis) or for many years at a time (chronic gastritis).

The underlying reason gastritis develops is due to a weakened lining of the digestive tract, specifically the mucus-lined barrier that normally keeps digestive acids and juices from damaging the stomach. Detrimental lifestyle factors, including smoking, eating a poor diet and using over-the-counter painkillers frequently, contribute to inflammation within the stomach and increase the odds of developing gastritis.

If you’re middle-aged or older, overweight or obese, experience chronic stress, and frequently eat processed foods, you’re at the greatest risk for experiencing gastritis. (1) Studies suggest that adults over the age of 60 tend to experience a gradual erosion of the stomach lining, higher rates of infections or autoimmune disorders, and nutrient deficiencies that can all make gastritis symptoms worse. What can you do to help manage your symptoms? Making changes to your diet — including lowering alcohol intake and consuming more fresh produce — plus quitting smoking and exercising can help protect you from gastritis.

The most common gastritis symptoms include: (3)

How long can you expect gastritis symptoms to last? Gastritis affects everyone differently, with cases ranging from mild and acute to chronic and severe. Some people experience no gastritis symptoms at all, yet a physical exam and testing (such as an endoscopy, stool or blood test) can reveal that they are, in fact, experiencing erosion of the stomach lining and low immune system functioning.

Gastroenterologists normally diagnose gastritis after performing an endoscopy (biopsy of the stomach lining) and observing signs of inflammation — including an increase in white blood cells called leucocytes, reddening, swelling, bleeding or small openings in the surface lining.

Different types of gastritis include:

Keep in mind that the gastritis symptoms mentioned above normally appear for several weeks at a time, but if they persist for longer or cause more serious symptoms like excessive blood in your stool, gastritis might not be the cause. Certain symptoms of indigestion can be caused by reactions to prescriptions, over-the-counter painkillers, food allergies/intolerance or other underlying health conditions, so if you experience ongoing symptoms without relief don’t assume that gastritis is necessarily to blame and plan to head to your doctor. 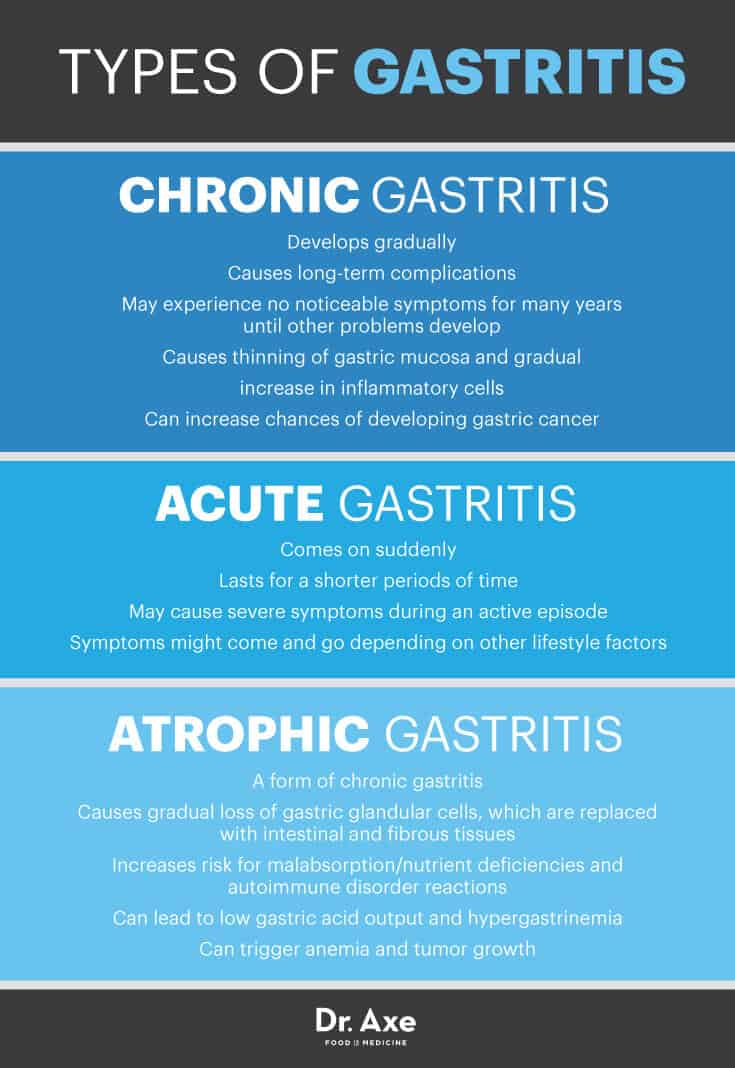 Natural Gastritis Treatment, Plus an Overview of a Gastritis Diet

If you suspect your stomach pains might be caused by gastritis, talk to your doctor so testing can be done and a proper diagnosis can be made. The good news is that once people know that acute gastritis is responsible for their symptoms, chances are high that they’ll feel better pretty quickly after making some changes. Chronic gastritis can also be treated and managed, but it usually requires medication use as well.

Your doctor might choose to treat your gastritis symptoms by altering your diet, changing the medications you take (or adjusting dosage levels), talking to you about controlling stress better, and possibly prescribing antibiotics or medications to control an infection caused by H. pylori. Some people also choose to take over-the-counter drugs, such as antacids, to control severe symptoms, while others are prescribed proton pump inhibitors or H2 blockers to help control levels of stomach acid. In the cases where chronic gastritis causes anemia, it’s common for vitamin B12 deficiency to be treated using intermittent injections.

Here are several ways you can naturally help reduce gastritis symptoms and prevent them from returning:

1. Remove Irritating Foods from Your Diet

The most important step in treating gastritis is to remove whatever is irritating the stomach lining in the first place. Many people with gastritis experience worsened symptoms when they eat lots of packaged/processed foods, fried foods, or hot and spicy foods. A poor diet is also a risk factor for gastritis because it promotes inflammation within the digestive tract, might raise the risk for leaky gut syndrome or food sensitives, and can contribute to nutrient deficiencies that worsen gastritis symptoms.

Tips to help you manage gastritis with your diet include:

Gastritis can cause symptoms like anemia, bloating, vomiting, deficiencies and dehydration, so it’s important to prevent complications by eating a nutrient-dense, low-processed diet. Research also shows that being overweight or obese can increase your risk for gastritis, stomach ulcers and other digestive issues. A healing gastritis diet that features mostly vegetables, fruits, high-quality proteins and healthy fats can help manage inflammation, allow you to maintain a healthy weight, and prevent deficiencies in critical vitamins, minerals and antioxidants.

3. Eliminate or Lower Use of Over-the-Counter Drugs

According to the University of Maryland Medical Center, up to 20 percent of people who chronically use nonsteroidal anti-inflammatory drugs (NSAIDs) develop gastric problems due to changes in stomach acid. (6) Frequently taking common pain-killing drugs, including aspirin, ibuprofen (Advil, Motrin IB, others) and naproxen (Aleve, Anaprox), can contribute to the develop of gastritis because these change how your body produces a type of enzyme that normally helps build the lining of the stomach. Try cutting down on how often you take over-the-counter drugs to manage your pain, and instead switch to natural treatments whenever possible.

For example, if you have chronic muscle or joint pains, consider using anti-inflammatory essential oils, such as peppermint oil. For headaches and PMS symptoms, work on reducing stress (for example, by using guided meditation or exercise), and try taking magnesium supplements. If you do need to take a painkiller, use a type labeled as acetaminophen (such as Tylenol), which has not been shown to alter the stomach lining or increase gastritis symptoms. (7)

Both a sedentary lifestyle and high amounts of stress can increase inflammation, which damages the digestive organs. Doctors recommend that people prone to gastritis symptoms and other digestive issues (like IBS or IBD) exercise regularly for at least 30 minutes per day five days per week. Exercise is a great way to boost immune functions, help you sustain a healthy bodyweight, balance hormones and control stress.

Stress can also increase production of stomach acid, which makes gastritis symptoms more painful. People with anxiety and high amounts of stress have been observed to have poorer immune functioning, higher than normal rates of H. pylori infections and stomach inflammation/ulcers. (8) There’s evidence that natural stress relieving practices, including deep breathing, yoga, tai chi, acupuncture and meditation, can be helpful in controlling digestive issues, including gastritis.

Gastritis vs. Ulcers: How Are They Different?

Stomach ulcers (also sometimes called peptic ulcers) and gastritis are caused by many of the same factors — however symptoms and treatments can be somewhat different. One major difference between the two is that the inflammatory changes associated with gastritis are usually confined to the stomach and don’t spread to the small intestine, referred to as the duodenum. Ulcers, on the other hand, commonly affect more than just the stomach, including the duodenum and the esophagus.

Stomach ulcers/peptic ulcers are believed to be more common than gastritis, although there’s also some overlap between the two conditions. Estimates show that about 500,000 new cases of peptic ulcers are reported each year in the U.S. alone and that about one in every 10 adults will develop an ulcer in his or her lifetime. (9) With both gastritis and stomach ulcers, the stomach lining may be “eaten away” and pain and burning can occur. This can lead to changes in appetite, weight and more.

Gastritis develops when the stomach lining is inflamed, the digestive system produces less acid and fewer digestive enzymes, and the stomach is no longer protected from acids’ effects. (11)

Gastritis stomach inflammation can be triggered by a number of factors, including: (12)

Gastritis symptoms account for more than 2 million visits to the doctor each year in the U.S. alone.

The most common gastritis symptoms include burning sensations in or above the stomach, stomachaches or pains, feeling nauseous or vomiting, bloated stomach, loss of appetite, feeling very full quickly, changes in weight, hiccups, burping, and changes in bowel movements and the appearance of stools.

You can help reduce gastritis symptoms naturally by removing irritating foods from your diet, consuming more beneficial nutrients, eliminating or lowering the use of over-the-counter drugs, lowering inflammation through exercise, and controlling stress.

Read Next: Stomach Ulcer Symptoms You Can’t Ignore & How to Naturally Treat Them

You probably already know that probiotic supplements support your microbiome and immune ...
Read More
View All