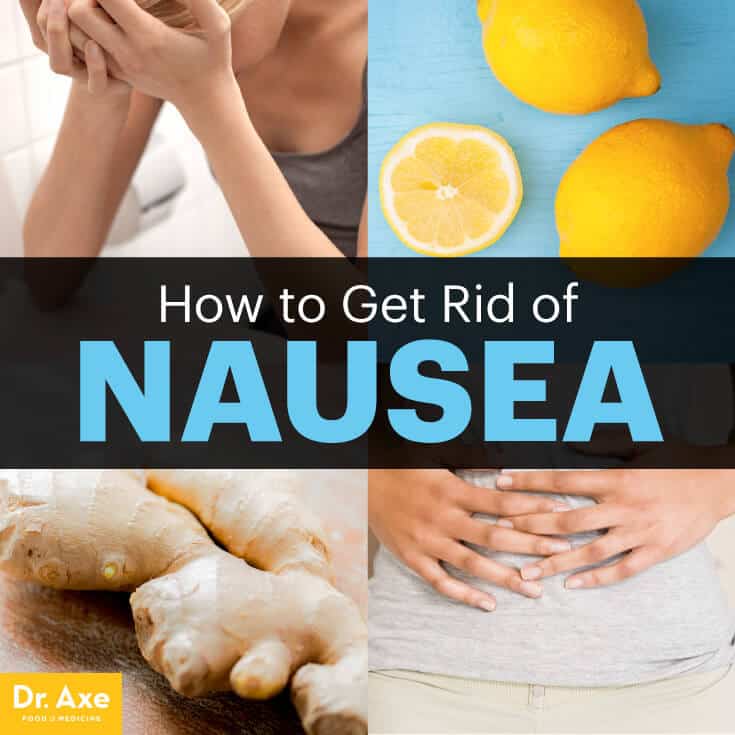 We have all felt it at some point in our lives — that “weird” feeling in the stomach that slowly rises and leaves you feeling hot, lightheaded and downright uncomfortable. Nausea isn’t pleasant, and it can be brought on by a number of factors, both psychological and physical in origin, so wouldn’t it be useful to know how to get rid of nausea? The good news is there are safe and cost-effective ways to reduce nausea symptoms naturally.

Did you know that nausea is actually a complex protective mechanism? The symptoms of nausea are influenced by messages that are sent to the brain because of a threat, such as an intestinal blockage, strong negative emotion or toxic buildup in the body.

Nausea is the feeling that you can vomit, forcefully emptying the stomach’s contents back through the mouth. When feeling nauseous, you may become pale, experience a cold sweat, produce extra saliva, and notice an increased heart rate or pulse. In some cases, vomiting will actually relieve the feeling of nausea because the body has eliminated the harmful substance or digestive blockage that was causing the sensation. (1)

While conventional medicine calls for antihistamines and other medications to provide nausea relief, there are also natural remedies for nausea, some of which you have in your kitchen already. Ginger, vitamin B6, chamomile tea and lemon, peppermint essential oil and cannabis oil help get rid of nausea the all-natural way.

How to Get Rid of Nausea: 6 Natural Treatments

The rhizome of Zingiber officinale, commonly known as ginger, has been used as a nausea remedy in various traditional systems of medicine for more than 2,000 years. Many preclinical and clinical studies have shown ginger to possess nausea-reducing effects against different stimuli. (2)

In 2000, researchers at the School of Postgraduate Medicine and Health Sciences in the U.K. performed a systematic review of the evidence from randomized controlled trials for or against the efficacy of ginger for nausea and vomiting. One study was found for each of the following conditions: seasickness, morning sickness and chemotherapy-induced nausea. The studies collectively favored ginger over placebo. (3, 4)

To get rid of nausea and take advantage of the medicinal ginger health benefits, drink ginger tea throughout the day. To make your own ginger tea, cut ginger root into slices and place them into a pot of boiling water for 10 minutes. Then strain the ginger, and you’re ready to drink. You can also find ginger tea at most grocery stores.

In addition, you can use ginger essential oil if you prefer that route.

Vitamin B6 plays an important role in a range of physical and psychological functions, including its ability to provide indigestion relief and reduce pregnancy nausea.

A randomized, double-blind, placebo-controlled study conducted at the University of Iowa College of Medicine involved 31 female patients who received 25-milligram tablets of vitamin B6 orally every eight hours for 72 hours and 28 women who received a placebo in the same regimen. Twelve of the 31 patients in the vitamin B6 group experienced severe nausea before treatment.

At the completion of three days of therapy, only eight of 31 patients in the vitamin B6 group had any vomiting. Following therapy, there was a significant difference in the mean “difference in nausea” score between patients with severe nausea receiving vitamin B6 and placebo. (5)

To get rid of nausea, take 25 milligrams of vitamin B6 three times daily until the symptoms disappear.

Peppermint oil is recommended for its antiemetic and antispasmodic effects on the gastric lining and colon. One possible mechanism of action of peppermint oil in the gastrointestinal system is the inhibition of muscular contractions induced by serotonin and substance P, which acts as a neurotransmitter. Several studies have shown the efficacy of peppermint oil in reducing postoperative nausea and vomiting.

In 2012, researchers at Molloy College in New York assessed the effects of aromatherapy on the severity of postoperative nausea in women undergoing surgical procedures in the postanesthesia care unit. Women complaining of postoperative nausea received traditional antiemetics, inhalation of peppermint oil or saline vapor. The results indicated a good effect of the aroma in reducing the nausea, although statistical significance was not reached due to the small sample of patients. (6)

A 2013 study was aimed at determining the efficacy of peppermint oil in preventing chemotherapy-induced nausea and vomiting. Researchers found that there was a significant reduction in the intensity and number of emetic events in the first 24 hours of treatment when compared to the control groups, and there were no adverse side effects reported. The cost of treatment was also reduced when peppermint essential oil was used. (7)

There are a number of peppermint oil uses for nausea. Try rubbing one to two drops into the back of your neck and bottoms of the feet. You can also add five to 10 drops of peppermint oil to a cool or warm water bath or add two to three drops to a cool compress and place it over your head.

Chamomile tea is one of the world’s most popular herbal teas. In fact, about a million cups are consumed every day. Tea bags of chamomile are available in the market or grocery store, and they often contain chamomile flower powder, either pure or blended with other popular medicinal herbs.

Traditionally, chamomile has been valued as a digestive relaxant, and it has been used to treat various gastrointestinal disturbances, including nausea, vomiting, indigestion, motion sickness and diarrhea. It helps get rid of nausea by dispelling gas, soothing the stomach and relaxing the muscles that move food through the intestines. (8)

Lemon is best known for its ability to cleanse toxins from any part of the body, but did you know that it serves as a natural remedy for nausea too?

A 2014 double-blinded, randomized, controlled clinical trial investigated the effect of lemon inhalation aromatherapy on nausea and vomiting during pregnancy. A hundred pregnant women with nausea and vomiting were divided into the intervention and control groups. Lemon essential oil and a placebo were given to inhale when patients felt nauseous. There was a statistically significant difference between the two groups. The mean scores of nausea and vomiting intensity in the second and fourth days of treatment in the intervention group were significantly lower than the control group, suggesting that lemon scent can be effective in reducing nausea in pregnant women. (9)

To get rid of nausea with lemon, simply cut open a fresh lemon and inhale every time you feel nauseous. You can also bite on a lemon, use lemon oil or drink lemon water when nausea symptoms arise.

Controversial cannabis oil is a naturally growing herb that has been used for thousands of years to treat health conditions. In the U.S., cannabis is a controlled substance, and it’s classified as a Schedule 1 Agent, which means that it’s a drug with increased potential for abuse. However, it has the ability to fight number health concerns and diseases. Researchers claim that the therapeutic value of cannabinoids is too high to be put aside. (10)

The nausea-reducing effect of cannabinoids has been shown across a wide variety of animals that vomit in response to a toxic challenge just like humans. Recently, evidence from animal experiments suggests that cannabinoids may be especially useful in treating the more difficult to control symptoms of nausea in chemotherapy patients. (11)

Researchers at Temple University School of Medicine found that several cannabinoid receptors play a role in the regulation of food intake, nausea and vomiting, gastric secretion and gatroprotection, intestinal inflammation, and cell proliferation in the gut. (12)

People who use cannabis oil as a means of treatment ingest it with an oral syringe or by adding it to a liquid that marks its potency. Most patients start with a very small amount and increase treatment doses over a long period of time, which may be necessary for those suffering from chronic nausea.

Some states offer cannabis for medical conditions, and this may require a medical note or proof of illness. However, don’t use cannabis oil, or any cannabis product, if you’re pregnant or could become pregnant. There is some evidence that women who use cannabis while pregnant may increase the risk of their children being born with birth defects or at very low weights.

Aside from these six natural ways on how to get rid of nausea, here are a few tips that can relieve the symptoms.

When you feel nauseous, it’s because the part of the brain called the “vomiting center” is receiving and reacting to messages sent from other parts of the body or brain. The vomiting center includes an area called the chemoreceptor trigger zone, which is part of the medulla oblongata and receives messages to initiate vomiting. (13)

These chemical messages are sent from a number of sources, including:

Some of the most common causes of nausea include:

Nausea and vomiting are common experiences in pregnancy, affecting 70 percent to 80 percent of all pregnant women. In the U.S., this translates to approximately 4 million women who are affected each year. Although most women with morning sickness have symptoms limited to the first trimester, a small percentage of women have a prolonged course with symptoms extending until delivery. The goal of treatment is to improve symptoms while minimizing risks to the mother and fetus. (14)

According to researchers at the University of Arkansas for Medical Sciences, most episodes of acute vomiting, lasting less than 48 hours, have an evident triggering factor that can be managed by removing the triggering agent. These triggers include infection, food poisoning, viral illness, toxic overload, emotional stress or medical treatments.

On the other hand, chronic and unexplained nausea can be a challenge. The cause often requires special investigation and a detailed physical examination. Functional gastroduodenal disorders, such as cyclic vomiting syndrome, functional vomiting and chronic idiopathic nausea, should be considered if investigations are unrevealing. (15)

Nausea symptoms aren’t painful, but they’re very uncomfortable and often difficult to describe. The feelings are experienced in the chest, upper abdomen or back of the throat.

Nausea that leads to vomiting can lead to dehydration, which causes skin changes, dry lips and mouth, sunken eyes, crying without tears, increased thirst, and rapid breathing. Children are more at risk of dehydration because they don’t recognize the signs, so it’s important that adults caring for sick children provide plenty of fluids and look out for these symptoms.

Over-the-counter antihistamines, such as dimenhydrinate, are commonly used to get rid of nausea, motion sickness, vomiting and dizziness. Dimenhydrinate comes as a tablet to take by mouth, usually to prevent motion sickness. It’s important that you speak to your health care provider before taking dimenhydrinate if you’re pregnant or having surgery. Some side effects include drowsiness, headache, blurred vision, dry mouth and problems with coordination.

Scopolamine transdermal is a skin patch that is used to prevent nausea and vomiting that’s caused by motion sickness or recovery from anesthesia and surgery. It works by correcting the imbalance of natural substances that occur in motion sickness, and it blocks signals to the brain that lead to nausea. The patch may lead to blurred vision, dry mouth, dizziness, decreased sweating, constipation and mild itching on the application site. If you’re pregnant, be sure to contact your health care provider before using scopolamine transdermal.

How to Get Rid of Nausea: Takeaways