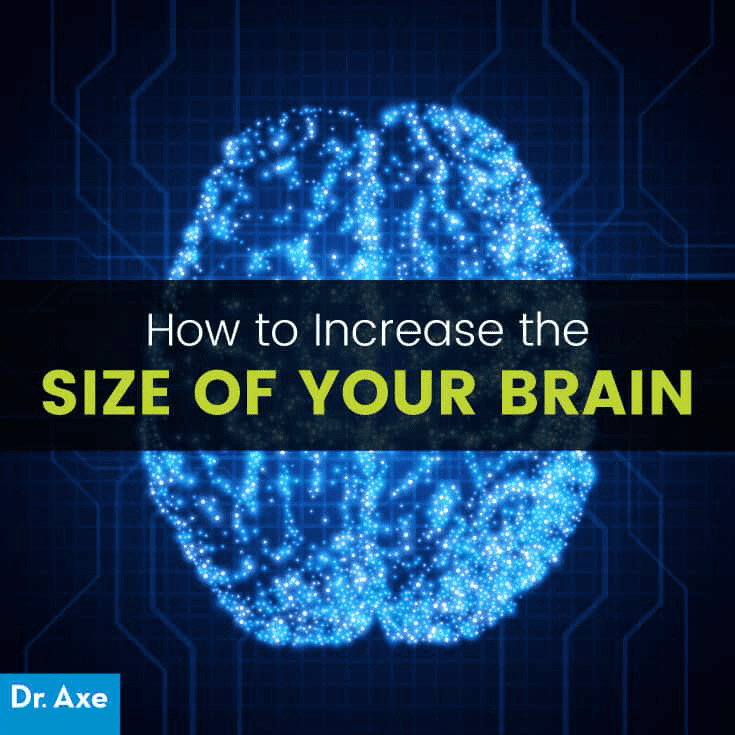 Several breakthroughs in brain science over the last few years suggest humans actually have the power to increase brain size. This can change your life in so many ways, from increasing memory to harnessing the power of your brain to create new neurons.

Ways to Increase the Size of Your Brain

Strike a pose. Yoga combines breathing, holding postures and meditation, a trifecta that not only protects the integrity of your brain, but thickens layers of your cerebral cortex, too. Brain scans now reveal that yoga changes your brain chemistry in positive ways. It helps build more robust levels of gray matter in brain areas involved with pain modulation. (1)

Yoga’s neuroprotective properties not only spare the brain from gray matter loss, but they seem to build up gray matter volume in certain regions of the brain, too. This is important because losing gray matter can lead to memory impairment, emotional problems, poorer pain tolerance and decreased cognitive functioning.

In 2015, researchers from McGill University and the National Institutes of Health found that consistency in your practice matters, too. The more years of yoga practice under someone’s belt was associated with positive changes in the left hemisphere, including increasing gray matter volumes in clusters located in the left insula, left frontal operculum, right middle temporal gyrus and left orbitofrontal cortex. These areas of the brain are involved in:

If you haven’t been practicing for years, don’t worry, your brain is still changing. Those same researchers found that the number of hours of weekly practice correlated with gray matter volume in different areas of the brain, including the hippocampus, primary visual cortex, primary somatosensory cortex/suprior parietal lobule and precuneus/posterior cingulate cortex.

These areas of the brain include functions related to:

Juggle. It’s clear juggling increases hand/eye coordination, but what’s going on inside your brain while juggling is absolutely incredible. Juggling doesn’t just increase your brain’s grey matter, the part of the brain that contains nerve cells’ bodies. It also helps a part of your brain that enhances cellular connections grow. In 2009, scientists from the University of Oxford discovered juggling bulks up your brain’s “white matter,” too. White matter consists of parts of the brain that contain mostly axons. These are outgrowths of nerve cells that serve as cell connectors. (8)

Study participants practiced juggling for a half hour daily for six weeks. Before and after diffusion tensor brain imaging showed that, while the white matter in the brains of the non-juggling control group did not change, the jugglers enjoyed more white matter in the parietal lobe part of the brain. And get this: The white matter bulk up occurred in all jugglers, regardless of how well they could juggle. (9) The parietal lobe helps involves spacial awareness, proprioception and processing the sense of touch. (10)

Meditate. Numerous studies suggest engaging in meditation structurally changes your brain for the better. In a 2011, Harvard and Massachusetts General Hospital researchers published a breakthrough study showing that guided meditation and mindfulness-based stress reduction led to measurable brain changes in areas involved with human memory, compassion and stress. In fact, practicing mindfulness meditation for just eight weeks changes your brain in a way that MRI scanners can detect. (Mindfulness meditation involves becoming aware of what is true moment by moment; to be present and turn attention to what is happening at that moment in a nonjudgemental way.) (11)

MRI images showed more brain matter density in the compassion, learning and memory centers in the hippocampus compared to pre-meditation scans. Interestingly, gray matter in the amygdala, a stress and anxiety center, shrank. All of this occurred with an average of 27 minutes of meditation practice a day for just eight weeks. (12, 13)

We know from earlier studies that that mindfulness-based stress reduction bolsters the posterior cingulate cortex, the temporo-parietal junction and the cerebellum areas of the brain. These areas involve learning and memory, emotion regulation, empathy and sense of self.

Prefrontal cortex and right anterior insula areas of the brain were thicker among meditators. These areas impact sensory processing. Researchers say based on the brain-sparing properties meditation has, it could be a way to offset age-related cortical thinning.  (14)

Learn to play an instrument (particularly at a young age.) Learning to play music literally increases the size of your brain, with the biggest impact occurring in children taking up music before the age of 7. In fact, scientists are looking to music to treat a range of learning disabilities. The details are astounding. Long-term, high-level musical training results in musicians with a better to integrate sensory information from hearing, touch and sight.

So how does this work? Scientists explain that brain circuits involved in musical improvisation are shaped by systematic training, leading to less reliance on working memory and more extensive connectivity within the rain. Some of the brain changes that occur with musical training reflect the automation of task (much as one would recite a multiplication table) and the acquisition of highly specific sensorimotor and cognitive skills required for various aspects of musical expertise. (15)

“Playing a musical instrument is a multi-sensory and motor experience that creates emotions and motions — from finger tapping to dancing — and engages pleasure and reward systems in the brain. It has the potential to change brain function and structure when done over a long period of time. Intense musical training generates new processes within the brain, at different stages of life, and with a range of impacts on creativity, cognition and learning.”— Gottfried Schlaug, MD, PhD, Harvard brain plasticity expert

And learning to play before the age 7, according to a study published in the Journal of Neuroscience, creates better connections across the corpus callosum part of the brain that connects the right and left hemispheres of the cerebrum. Music training before age 7 changes the white-matter connectivity in a way that supports a well-connected brain infrastructure into adulthood. (16, 17)

Check out the other natural ways to increase your brain size, too:

Get high-quality omega-3s. A 2014 study published in Neurology found that having healthy omega-3 fatty acids circulating in the body is linked to bigger brains. People with twice the levels of omega-3s DHA and EPA than others had about .7 percent larger brain volume compared to women with low levels. The high omega-3 group also had a 2.7 percent larger hippocampus. (This part of the brain involves memory.) Women ate non-fried oily fish like salmon and mackerel, plus supplements, to obtain omega-3s. (18) Just make sure your fish oil doesn’t come from fish you should never eat.

I always advise eating omega-3 foods to get your nutrients, and then supplementing if you’re still not getting enough. While the right fish oil benefits health, it’s important to avoid low-quality oils. A 2013 linked mega-doses, what most doctors would describe as 2,000-plus milligrams of fish oil, to prostate cancer. While there’s still more research to be done there, in my opinion, mega-doses aren’t necessary. If fish oil isn’t your thing, algal oil serves as a vegetarian source DHA-rich omegas. (In facts, fish are rich in omegas because they eat algae.)

Have sex. This science will leaving you wondering how to increase your libido. Regularly having sex could serve as a natural way to manufacture more neurons. In an animal study, University of Maryland researchers discovered that sex promotes the formation of new neurons and improves cognitive function. This neuron creation is known an neurogenesis. (19) Other research shows that sex can help preserve long-term memory, protecting it during times of high stress. (20)

Don’t skip your cardio. Older adults can actually increase brain volume in regions of the brain linked to age-related brain structure and function decline. In fact, a landmark 2006 study found regular aerobic exercise significantly increases both gray and white matter regions of the brain. These same results were not evident in stretching and toning groups. (21)

And while I’m a huge fan of HIIT workouts because they boost the metabolism and burn more fat than traditional cardio, think twice before completely getting rid of longer, less-intense bouts of aerobic exercise. An animal study suggests moderately jogging each day results in a brain teeming with new neuron growth. In the high-intensity interval training group, not so much. (22, 23)

Look into intermittent fasting. Early indications of animal studies also suggest routinely practicing intermittent fasting can beneficially thicken certain parts of your brain while boosting brain function. (24) Intermittent fasting for women is becoming increasingly popular for its brain fog-clearing capabilities. This type of fast involves a brief fast where, for 12 to 16 hours or more, you don’t eat anything except water (a few exceptions apply). And while that may sound incredibly difficult to achieve, you might already be fasting without knowing it if you eat dinner at, say, 7 p.m. and break your fast in the morning between 7 to 10 a.m. — and if you only have water and black coffee or tea between.

Medical studies suggest that intermittent fasting not only increases energy, but also:

Keep an eye on psilocybin mushroom research. Psilocybin mushrooms are formally known as Psilocybe cubensis. That’s scientific name for more than 100 mushroom species that contain psilocybin and psilocin. These are two compounds that account for the hallucinations and “tripping” that occur when a person ingests these mushrooms.

While not currently legal, medical researchers are investigating these “magic mushroom” compounds to learn more about how they may benefit the brain. In a surprise finding, University of South Florida researchers discovered that low doses of the psychedelic drug erased the conditioned fear response in mice while helping the brain give birth to new neurons. In the study, published in Experimental Brain Research in 2013, researchers suggest that these mushroom compounds could serve as a treatment option for PTSD one day. (28, 29)

Read Next: What’s Causing My Brain Fog? (Plus, Ways to Reverse It)