While the name may make you smile and laugh with thoughts of the “Little Rascals” character, alfalfa sprouts are no joke. The sprout of the alfalfa flower seed is full of health benefits — all while low in calories and high in vitamins and minerals.

Let’s find out just how these flower sprouts are able to fight these chronic diseases … along with all the other benefits alfalfa sprouts provide.

What Are Alfalfa Sprouts?

Alfalfa sprouts come from a germinated alfalfa seed and are a great, nutritious addition to many meals. When the seed germinates, it creates a shoot, which is then harvested before the plant matures fully. Commonly found in Oriental dishes, it’s usually added to soups, on top of sandwiches and with salads.

Sprouts are filled with many of the great benefits found in seeds and actually are healthier because the process of sprouting brings out many enzymes. They also carry more protein, vitamins and minerals, as well as a lower proportion of starch, than unsprouted seeds. The starches are turned to simple sugars and are thus easier to digest.

Sprouting dates back as far as 5,000 years, when Chinese physicians used sprouts medicinally. In the 1700s, sailors discovered sprout’s ability to prevent scurvy, which was the most common cause of death on long voyages. (1)

During World War II, Dr. Clive McKay, a nutrition professor at Cornell University, brought the idea of sprouts into the mainstream Western food culture. During the war, McKay and his team of researchers determined bean sprouts to be an easily cultivated, nutritional food source, calling bean sprouts,

… a vegetable that will grow in any climate, will rival meat in nutritive value, will mature in 3–5 days, may be plated any day of the year, will require neither soil nor sunshine, will rival tomatoes in vitamin C, will be free of waste in preparation, and can be cooked with little fuel.

It’s amazing to consider how valuable this discovery was in a time when resources were low and the need for nutritious food was high.

The alfalfa plant itself also has a long, rich history. We typically think of alfalfa as a plant used for animal feed, but it provides many benefits to humans as well. Alfalfa has a high vitamin content and is sometimes used as a nutritional supplement — and you’ll see why below. (2)

Alfalfa sprouts are very low in calories but provide a number of vitamins and minerals, which makes them a perfect supplemental item to add to your favorite meals. Alfalfa sprouts are a great source of isoflavones and other phytoestrogens, which are plant compounds that mimic human estrogen. (5, 6) Studies of consumption of soy foods, which also have high concentrations of isoflavones, have shown positive outcomes in decreasing risk of death and recurrence in breast cancer patients. (7, 8)

The Nutrition Journal also detailed some of the ways nutrition can curb breast cancer, including alfalfa. (9)

Thanks to high levels of vitamin K and phytoestrogens, alfalfa sprouts can help women minimize symptoms related to menopause and menstruation. Vitamin K is a blood-clotting vitamin, so it can help with excessive bleeding.

The combination of vitamin K and phytoestrogens has an effect on regulating estrogen, which could help minimize PMS and symptoms of menopause. (10)

Vitamin K builds bones, which is why it’s essential in preventing and even helping to treat osteoporosis. (11) The body needs vitamin K to adequately utilize the calcium, which builds bones. Thanks to the growing understanding of the benefits of vitamin K on bone health and ongoing studies that show the connection between bone health and increased levels of vitamin K, the daily recommended values of the vitamin has been increased approximately 50 percent. (12)

Alfalfa sprouts also have a notable amount of manganese, which is also an essential nutrient in preventing osteoporosis and inflammation.

While there is no cure for diabetes, regulating the disease naturally can be achieved through a diabetic diet. A study published in the Pakistan Journal of Pharmaceutical Sciences found that alfalfa sprouts are a successful anti-diabetic due to their ability to lower blood glucose levels. (13)

5. Chock-Full of Antioxidants and Other Anti-Aging Agents

Alfalfa sprouts are a proven high-antioxidant food, which helps protect our cells from damage caused by free radicals. (14) Antioxidants promote better health and can prevent a number of diseases and illnesses, such as cancer and heart disease.

Alfalfa sprouts are a successful anti-hyperlipidemic, which means they help reduce the levels of lipids in the blood. (16) Reducing lipid count can have an effect on reducing symptoms of coronary heart disease brought on by high cholesterol levels.

A 1978 study done on monkeys showed the addition of alfalfa to their diets reduced the negative effects of cholesterol, proving alfalfa is one of the better cholesterol-lowering foods. (17)

Alfalfa sprouts on one of the top vitamin C foods. A serving of alfalfa sprouts can offer 14 percent of your recommended daily value of vitamin C, and because vitamin C is water-soluble, we need to  replenish our supply through our diets. Alfalfa sprouts are such an easy addition to meals, it’s a great way to supplement your vitamin C needs — which is essential to many healthy bodily functions.

Alfalfa sprouts are readily available in most grocery stores and food markets. When choosing them, look for freshness in the roots and stems. They should smell fresh and clean.

Be sure to wash them thoroughly when returning home, and keep the sprouts properly refrigerated. If they begin to smell musty, do not consume them.

Growing alfalfa sprouts at home is easy and fun, and there are multiple ways to do so in the comfort of your own home. (19)

First off, be sure to buy seed that is not treated with fungicide or any other chemicals. You should only use seed meant for growing sprouts.

You can grow them in a jar, a clay tray or other containers. 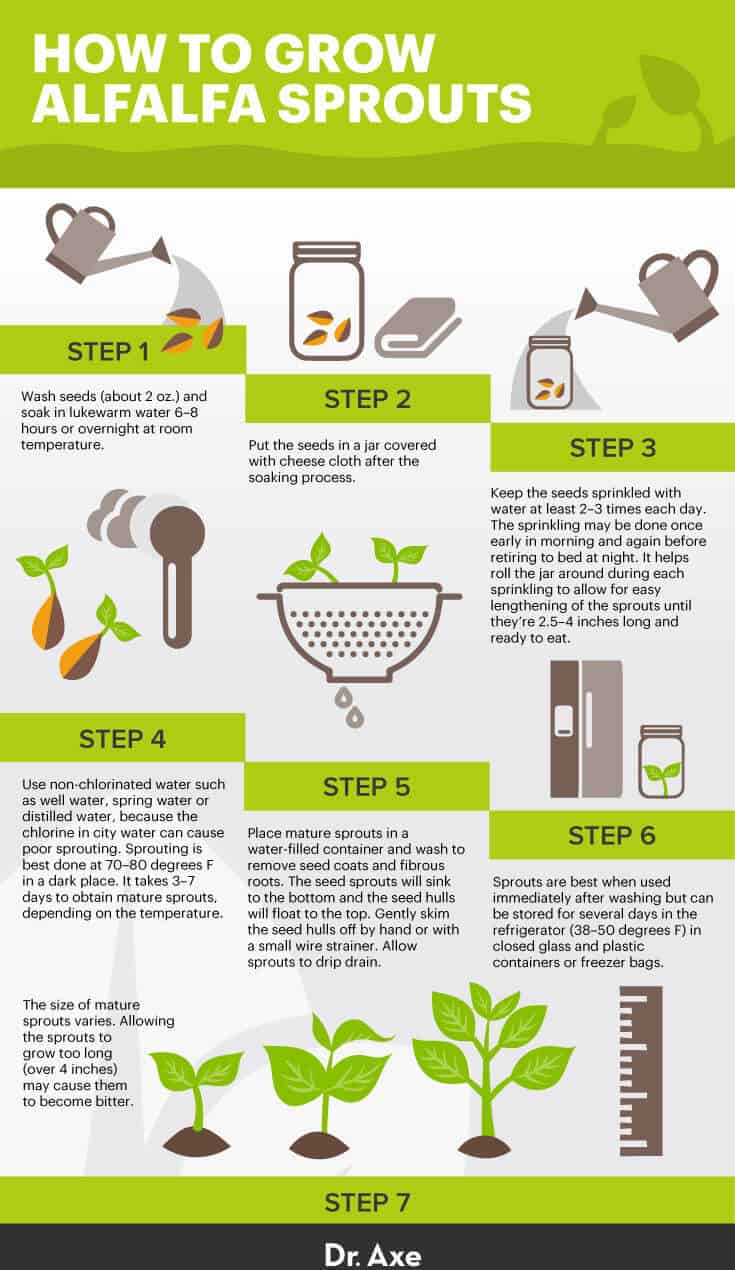 Alfalfa sprouts can be added to almost any meal, but here are a few of my favorite recipes:

While alfalfa sprouts are nutritious and provide many health benefits, there are some precautions that come with these seed sprouts.

Sprouts have a reputation in connection with foodborne illness. Because they’re consumed raw or lightly cooked, they do carry a risk. Sprouts need a warm and humid environment to grow, which is also the environment ideal for bacterial growth. Sprouts contaminated with Salmonella and E. coli have caused at least 30 outbreaks since 1996.

The bacterial problem with sprouts usually begins with the seed. There are a number of techniques to kill harmful elements on alfalfa seeds, but nothing is proven to eliminate all bacteria. Growing sprouts at home also does not guarantee they’re any safer, as the problem lies in the seed.

The FDA has advised that children, the elderly and persons with weakened immune systems should avoid consuming raw sprouts.

Also, because of high levels of vitamin K, individuals taking blood thinners should avoid alfalfa sprouts. This can be an major interaction, so check with your Doctor before consuming alfalfa sprouts.

There are concerns about how the levels of canavanine found in alfalfa sprouts affects the human body, specifically the immune system. WebMD issues this warning about alfalfa sprouts and those suffering autoimmune diseases: “Alfalfa might cause the immune system to become more active, and this could increase the symptoms of auto-immune diseases. There are two case reports of SLE patients experiencing disease flare after taking alfalfa seed products long-term. If you have an auto-immune condition, it’s best to avoid using alfalfa until more is known.” (21)

More studies are needed to determine exactly how and why certain disorders are affected by alfalfa sprouts, but the following individuals should avoid alfalfa sprouts until more is know:

Alfalfa sprouts have a funny-sounding name, but they most definitely should be taken seriously. They have been tied to fighting aging, cancer, osteoporosis, diabetes, high cholesterol and menopause symptoms, along with providing high levels of vitamins and minerals.

They’re also easy to sprout at home, though keep in mind there are certain precautions you should take. However, as long as you keep those precautions in mind, alfalfa sprouts make a great addition to many recipes and provide a delicious, low-calorie, nutrient-dense option to your diet.

Whether you realize it or not, fermentation is a process that’s used ...
Read More
Dr. Axe on Facebook 1 Dr. Axe on Twitter 22 Dr. Axe on Instagram Dr. Axe on Google Plus Dr. Axe on Youtube Dr. Axe on Pintrest 1 Share on Email Print Article 24

What Is Functional Soda (& Is It Good for You)?

It’s become common knowledge that soda is bad for you for a ...
Read More
View All