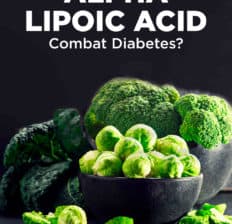 What is it about foods like broccoli and spinach that make them so healthy? There are the fiber, vitamins and minerals, of course, but then there are other important chemical compounds we call “antioxidants,” too — including alpha lipoic acid (ALA).

Chances are you’ve heard a lot about the many benefits of various antioxidants and high-antioxidant foods — fighting inflammation, helping to beat cancer and so much more — but have you ever wondered what exactly antioxidants are and how they work in the body?

Alpha lipoic acid — one kind of antioxidant — is a type of compound found in plant foods we commonly eat.

What is alpha-lipoic acid good for? It helps scavenge free radicals and slows the aging process — but perhaps its most famous use is in helping treat diabetes naturally.

Humans make a small amount of ALA on their own, although the concentration in our bloodstreams goes up substantially when we eat a healthy diet. It’s naturally abundant in foods like green veggies, potatoes and certain types of yeast — plus it can be man-made in a lab and taken as an oral anti-inflammatory supplement.

What Is Alpha Lipoic Acid?

Alpha lipoic acid (also called lipoic acid or thioctic acid) is an organosulfur compound found in the body and also synthesized by plants and animals. It’s present in every cell inside the body and helps turn glucose into “fuel” for the body to use for energy.

Is it “essential” that you consume a certain dosage of alpha lipoic acid every day? Not exactly, which is why it’s not considered an “essential nutrient.”

Even though we can make some of it on our own without supplements or outside food sources, eating an antioxidant-packed diet plus potentially using ALA supplements can increase the amount circulating in the body. Studies show this can have far-reaching benefits.

ALA’s most valuable role in the body is fighting the effects of free radicals, which are dangerous, chemical-reaction byproducts that form during the process of oxidation. Within our cells, ALA is converted into dihydrolipoic acid, which has protective effects over normal cellular reactions, such as those involved in metabolic functions and neuron signaling.

Like other antioxidants, alpha lipoic acid can help slow down cellular damage that is one of the root causes of diseases. It also works in the body to restore essential vitamin levels, such as vitamin E and vitamin C, and acts as a cofactor for several important mitochondrial enzymes. Additionally, it helps the body digest and utilize carbohydrate molecules.

Something that makes ALA unique is that it’s both water-soluble and fat-soluble, unlike other nutrients (like B vitamins or vitamin A, C, D or E). This means it can be properly absorbed despite what types of foods you’re eating, and it can be used in almost all parts of the body.

Note: Alpha lipoic acid is not the same thing as alpha linolenic acid, a type of omega-3 fatty acid. Both are sometimes referred to as ALA, which can be confusing, but they’re two different nutrients with different roles in the body.

1. Has Anti-Inflammatory and Antioxidant Effects

Because it acts like an antidote to oxidative stress and inflammation, alpha lipoic acid seems to fight damage done to the blood vessels, brain, neurons and organs, like the heart or liver.

Being low in antioxidants in general can speed up in the aging process, resulting in symptoms like a weakened immune function, decreased muscle mass, cardiovascular problems and memory problems.

There’s some evidence that ALA is acts as a “heavy metal chelator,” binding to metals (also called “toxins”) in the body, including mercury, arsenic, iron and other forms of free radicals that make their way into the bloodstream through water, air, chemical products and the food supply.

Alpha lipoic acid supplementation seems to help improve insulin sensitivity and might also offer protection against metabolic syndrome — a term given to a cluster of conditions like high blood pressure, cholesterol and body weight. Some evidence also shows that it can help lower blood sugar levels.

A 2012 systematic review and meta-analysis, along with a 2013 controlled clinical trial, showed that ALA is an effective drug in the treatment of diabetic neuropathy, which affects about 50 percent of people with diabetes. Diabetic neuropathy (nerve damage) causes symptoms like tingling, numbness and burning in the limbs. About 300–600 milligrams per day in IV form has been shown to be beneficial.

ALA is used to help relieve other complications and symptoms of type 2 diabetes too, such as cardiovascular problems, eye-related disorders, pain and swelling. That’s why it should be part of any diabetic diet plan to treat this common disorder.

Most studies show that high doses of ALA in IV form are more effective than eating ALA-rich foods.

According to a randomized, double-blind, placebo-controlled clinical trial, ALA also offers help in managing idiopathic pain (pain of unknown origin)in people without diabetes.

A major benefit of alpha lipoic supplementation in diabetics is the lowered risk for neuropathic complications that affect the heart, since around 25 percent of people with diabetes develop cardiovascular autonomic neuropathy (CAN). CAN is characterized by reduced heart rate variability and is associated with an increased risk of mortality in people with diabetes.

Results from certain studies demonstrate that long-term use of ALA can halt oxidative damage that can result in modified DNA in the retina. As people age, their vision becomes much more compromised, which is why it’s important to eat a nutrient-dense diet well before old age to prevent degeneration of eye tissue or vision loss early on. 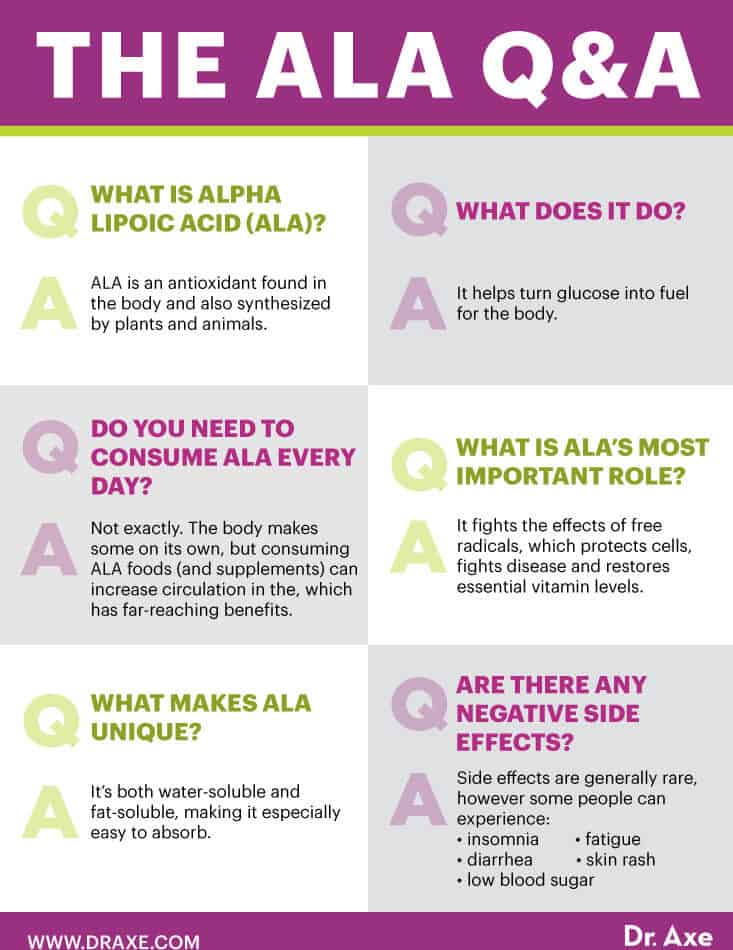 ALA seems to easily make its way into the brain by passing the blood-brain barrier, where it can protect delicate brain and nerve tissue. It’s also used to prevent strokes and other brain problems, including dementia in older adults.

Recent experiments using rats have shown that ALA can help reverse damage in aging cells of the brain, improve performance in memory tasks, lower oxidative damage and improve mitochondrial function, although we still don’t know how well these benefits can apply to aging humans.

Glutathione is considered the “master antioxidant” by many experts, since it’s crucial for immunity, cellular health and disease prevention.

One randomized, controlled trial found that 300–1,200 milligrams of alpha lipoic acid helps increase the ability of glutathione to regulate the body’s immune response. This may help fight off diseases, such as type 2 diabetes/insulin resistance and even HIV/AIDS.

Another meta-analysis found that supplementation made a significant difference in increasing glutathione levels, although this didn’t necessarily transfer to protection against diseases development.

In adults, alpha lipoic acid supplementation also seems to positively impact patients with immune deficiency syndromes and serious viruses. It does this by restoring blood total glutathione levels and improving functional reactivity of lymphocytes to T-cell mitogens. (These are cells in the immune system that fight pathogens.)

When it comes to battling physical signs of aging on the skin, certain studies have found that topical treatment creams containing 5 percent alpha lipoic acid can help reduce fine lines caused by exposure to sun ways. ALA is thought to act as an anti-aging substance because it helps restore skin tissues and epidermal structure while battling free radicals.

A 2017 placebo-controlled clinical trial concluded that “5% Cubosomal ALA is an effective and safe modality for improving aging face.” When adult women applied an ALA treatment to one side of their faces for six months, the majority experienced significant improvements, including increased epidermal thickness, which contributes to skin’s texture and tone.

Due to its ability to help convert foods into nutrients, ALA may help increase energy metabolism, which is why some athletes use ALA supplements for enhanced physical performance.

What are the side effects of taking alpha lipoic acid? Side effects of ALA in supplement form are generally rare, but for some people they can include:

Alpha lipoic acid supplements haven’t been studied in children or women who are pregnant or breastfeeding, so right now they’re intended for use in adults only.

How to Take It

The best way to get any nutrients is ideally through real food sources, since this is how your body knows how to absorb and use various chemicals best. ALA is found in many different plant and animal sources, since it’s bound to protein molecules (especially lysine).

The concentration of ALA in different foods can vary widely depending on where they’re grown, the quality of the soil, how fresh they are and how they’re prepared, so it’s hard to quantify how much is in each type of food. There hasn’t been much research done to draw conclusions about how much ALA is found in particular foods, although we know vegetables and certain organ meats seem to be highest.

That being said, when you eat a whole food-based diet and vary the types of things you eat, chances are you consume a decent amount in addition to what your body already makes on its own.

Here are some of the best food sources of alpha lipoic acid:

Alpha lipoic acid supplements are available in both capsule and injection forms.

According to researchers from Oregon State University, the amounts of lipoic acid available in dietary supplements (ranging in dosage from 200–600 milligrams) can be as much as 1,000 times greater than the amounts that could be obtained through someone’s diet alone.

Taking oral ALA supplements with a meal is believed to decrease its bioavailability, so most experts recommend taking it on an empty stomach (or at least one hour before or after) for the best results.

How do you know if you should take ALA supplements? For example, what are symptoms of alpha-lipoic acid deficiency?

Most people make enough to prevent a deficiency, although supplements can be helpful for those prone to diabetes, stroke, heart disease or glaucoma.

When someone has this disease, that person works with a doctor to help treat symptoms using supplementation.

Because ALA isn’t an official essential nutrient, there hasn’t been an established daily recommendation needed to prevent a deficiency.

A general dosage recommendation for alpha lipoic acid supplementation is between20–50 milligrams per day for adults. This amount seems to be beneficial for general preventative health.

Larger doses up to 600–800 milligrams per day are sometimes used in patients with diabetes or cognitive disorders but not recommended for the general public.

Dosage recommendations differ depending on whom you ask, but below are some general guidelines that are within the safe range:

Who should not take alpha lipoic acid? Some potential interactions, or circumstances where you want to speak to your doctor before taking extra alpha lipoic supplements, include: