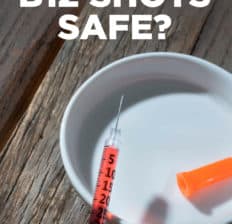 Vitamin B12 deficiency is believed to be one of the most common nutrient deficiencies in the world, especially among people taking stomach acid-altering medications and antibiotics frequently, along with the elderly and sometimes vegetarians/vegans. For this reason, B12 shots are sometimes used to offset the many symptoms of vitamin B12 deficiency, such as fatigue and weakness, poor moods, and low concentration.

Even more serious is that B12 deficiency can disturb red blood cell formation and elevate homocysteine levels, which negatively impacts neurological and cardiovascular health, in addition to posing risks during pregnancy.

While there are vitamin B12 foods available, some people have a harder time absorbing and actually utilizing this nutrient due to digestive or metabolic limitations. Because B12 vitamin is bound to amino acids (found in protein foods) and is only released when certain enzymes and stomach acids are present, it’s possible to consume enough but still remain somewhat deficient.

So are B12 shots the answer to restoring health in those with low levels? Vitamin B12 benefits and benefits of receiving B12 injections can include improved moods, protection against cognitive decline and better energy, but as you’ll learn, there are also risks involved.

B12 shots don’t always resolve the underlying problem of deficiency, so they’re not the be-all and end-all when it comes to treating symptoms.

Vitamin B12 is an essential vitamin that’s crucial for many vital metabolic and hormonal functions — including the production of digestive enzymes and carrying important nutrients into and out of cells. Due to how it helps convert and synthesize many other compounds within the body, it’s needed for well over 100 daily functions.

Some of the roles that are attributed to vitamin B12 include:

How Much Do You Need?

The National Institute of Health (NIH) shares that the recommended dietary allowance (RDA) for vitamin B12 is:

For adults over 50 years old, the NIH recommends taking a daily vitamin B12 supplement or consuming foods fortified with vitamin B12. The recommendation is to take between 25–100 micrograms per day, as this amount has been shown to maintain healthy levels of vitamin B12 levels in older people.

Vitamin B12 levels are usually tested with a blood serum test, and values below approximately 170–250 picogram per milliliter in adults are considered signs of deficiencies. However, it’s common for blood tests to reveal inaccurate information regarding B12 levels since a high percentage is stored in the liver and not always revealed through testing. (For example, taking large amounts of folic acid has been found to mask vitamin B12 deficiency in some patients.)

B12 injections are shots that contain high doses of vitamin B12 that are used to quickly elevate levels in someone with a deficiency.

Vitamin B12 shots are normally available by prescription only and are administered into a patient’s muscle tissue about once monthly, although dosage varies depending on age and medical history.

Most people living in industrialized nations tend to get enough vitamin B12, although not all. The absorption of vitamin B12 requires something called intrinsic factor, which is a protein found in stomach acid. Some medical conditions impact the body’s ability to make intrinsic factor and therefore causes a B12 deficiency.

Vitamin B12 shots are administered most often in those with genetic conditions that block absorption and people with the disorder called pernicious anemia, which can result in severe malabsorption and deficiency. Pernicious anemia is caused by a decrease in red blood cells when the body can’t absorb enough vitamin B12, greatly raising the risk for neurological complications.

The NIH reports that in those with confirmed deficiency, B12 shots can have important benefits. However, it’s been found that oral B12 supplementation when taken in high doses can have similar protective effects.

For example, one study found that taking 1,000–2,000 micrograms orally in properly timed doses helped improve levels as much as injections.

Benefits of B12 injections include the following:

Safety and Side Effects

The potential risk or drawbacks of B12 injections include the following:

Even if someone receives high doses of vitamin B12, it doesn’t necessarily mean that his or her body has the ability to properly absorb and use the whole dose. That’s because utilization of vitamin B12 (especially from supplements) depends on levels of other metabolic cofactors and acids.

The NIH reports that only about 10 micrograms of a 500-microgram oral supplement are actually absorbed in healthy people due to limitations of stomach acid and intrinsic factor.

Vitamin B12 has the potential to interact with certain medications, including diabetic prescriptions, metformin, proton pump inhibitors, antagonists and antibiotics. High doses might also possibly interfere with levels of other vitamins, enzymes and minerals, which is always a potential problem when taking any nutrient in very large quantities.

Is it too dangerous to take too much vitamin B12? Because it’s a water-soluble vitamin, any excess that isn’t used should be flushed from the body and not pose too much risk (not the case with fat-soluble vitamins like vitamin A).

The Institute of Medicine reports that “no adverse effects have been associated with excess vitamin B12 intake from food and supplements in healthy individuals.”

However, if you’re not deficient in vitamin B12 to begin with or you don’t address the underlying reasons you might be deficient, injections likely won’t do much to improve overall quality of life. As researchers from Cornell University Medicine stated, “Management requires correctly diagnosing cobalamin deficiency, reversing it, defining its underlying causes, preventing relapse, managing the underlying disorder and its complications, and educating the patient.”

Do You Need B12 Injections?

The signs and symptoms of B12 deficiency that indicate you may benefit from vitamin B12 injections include:

Why might you be low in vitamin B12, even if you eat a relatively healthy diet? One reason is being low in a type of compound produced within the stomach called intrinsic factor (a type of glycoprotein), which combines with vitamin B12 once consumed in order to allow it to be absorbed.

Research shows that around 50 percent to 60 percent of ingested vitamin B12 is usually absorbed when enough intrinsic factor is present in relation to B12, but absorption decreases drastically when this ratio changes.

Older people usually produce less stomach acid and therefore less intrinsic factor, increasing their risk for deficiency. People who take medications regularly that decrease stomach acid production can also become deficient in vitamin B12 for this reason, whether they consume enough from their diets or not.

Because of how vitamin B12 is absorbed, the most common risk factors for B12 deficiency are:

Better Ways to Address B12 Deficiency

The ideal and safest way to consume enough of any nutrient is getting it naturally through whole food sources. However, sometimes due to other health conditions or food preferences, this isn’t always possible, but if you can, you should consume foods that provide this valuable vitamin.

The foods highest in vitamin B12 are:

When it’s not possible to get enough vitamin B12 from your diet, perhaps due to genetic conditions or taking necessary medications, someone might choose to boost intake of vitamin B12 in several ways other than receiving injections. These can include taking oral dietary supplements and now even a new form of prescription vitamin B12 medication available in gel form.

Gel formulations of vitamin B12 are somewhat new and applied into the nostrils (intranasally). They’re now considered an alternative to vitamin B12 shot that some prefer because they require no needles.

There is not as much evidence regarding long-term efficacy or safety of gel vitamin B12 compared to injections, but at this time it appears B12 gel works similarly to raise blood levels.

Remember that whether you choose to use vitamin B12 in supplement form or not to resolve deficiency symptoms, it’s important to identify the real reason you’re struggling with deficiency in the first place.