Most people have never even heard of GABA, let alone know what it does in the body. However, for those suffering from anxiety or insomnia, this important neurotransmitter can be the key to reducing symptoms.

In fact, many medications that are used to treat these conditions function by boosting the activity of this neurotransmitter in the brain. Benzodiazepines, for example, are a class of anti-anxiety drugs that work by enhancing the activity of GABA receptors to calm the nerves and alleviate anxiety.

Sleeping medications like Ambien also act by increasing the activity of GABA, resulting in a sedative effect that can relieve insomnia.

The significance of this key neurotransmitter has been recognized only in recent years, but it is now suspected to play a role in a multitude of health conditions, including ADHD, insomnia, depression, anxiety, inflammation and premenstrual syndrome.

It may also increase levels of human growth hormone, an important hormone that can reduce the risk of heart disease, increase muscle strength and kick up weight loss.

Fortunately, you can increase your levels of this crucial neurotransmitter naturally by either using a supplement or increasing levels of other natural compounds that directly affect its synthesis.

Gamma-aminobutyric acid, also known as GABA, is a neurotransmitter that helps send messages between the brain and the nervous system.

It is produced in the brain from glutamate. This process is catalyzed by the active form of vitamin B6 and the enzyme glutamate decarboxylase (GAD).

Its main function is to reduce the activity of nerve cells in the nervous system. A good amount of emerging research has found that it could play a role in many conditions, including depression, anxiety and stress.

Gamma-aminobutyric acid is thought to have a natural calming effect and is believed to reduce feelings of of anxiety and fear by decreasing neuronal excitability.

It is often used as a natural supplement to promote sleep, improve mood and ease premenstrual symptoms.

One of the main functions of GABA is to reduce nerve excitability, which could be linked to feelings of anxiety and fear. This is because it has a calming effect and is often used as a natural remedy for anxiety. In fact, certain anxiety disorders have even been associated with decreased levels of GABA.

A study in the American Journal of Psychiatry found that those with panic disorder, a type of anxiety disorder characterized by recurring panic attacks, had an impaired GABA response. (1) Another study from the Columbia University College of Physicians and Surgeons’ Department of Psychiatry showed that those with panic disorder and a family history of mood and anxiety disorders had decreased brain concentrations of GABA. (2)

In addition to GABA, there are many other natural remedies for anxiety available, such as meditation, essential oils or valerian root, an herb that helps increase levels of GABA to inhibit nerve activity.

Insomnia is a condition characterized by difficulty falling asleep that affects an estimated 30 percent of adults worldwide. (3) GABA has a calming, sedative effect and may be able to help naturally induce sleep by reducing nerve excitability. (4)

One 2015 study found that taking GABA helped participants fall asleep quickly, shortening the amount of time it took to fall asleep by an average of five minutes. (5) Additionally, those with insomnia may actually have lower levels of GABA. A 2008 study in the journal Sleep found that patients with insomnia had 30 percent lower levels compared to a control group. (6)

In addition to preventing anxiety and regulating sleep, the GABA neurotransmitter is also thought to play a central role in depression. Research has found that people with depression tend to have lower levels of GABA than those without depression. (7)

GABA levels may also increase after depression is treated. One study from the Department of Psychiatry at the Yale University School of Medicine showed that patients who underwent electroconvulsive therapy for their depression exhibited increased levels of GABA following treatment. (8) Thanks to its antidepressant effect, GABA may be a good alternative to traditional treatments for depression. (9, 10)

Other natural remedies for depression include modifying your diet, getting in plenty of exercise and making sure you’re meeting your vitamin D needs. Premenstrual syndrome, or PMS, is a group of symptoms like mood swings, fatigue and food cravings that occur in women between ovulation and the start of menstrual bleeding. Studies show that GABA levels are disrupted by menstruation and may decline across the menstrual cycle. (11)

This neurotransmitter may be able to help provide relief from symptoms of PMS. For example, some studies have suggested that it could act as an a natural pain reliever while others have noted that it could be involved in the mechanism of cramps. (12, 13)

Chasteberry, vitamin B6 and magnesium are also natural remedies for PMS that can help balance hormones and reduce symptoms.

Although inflammation is a normal response triggered by the immune system as a result of illness or injury, chronic inflammation can contribute to diseases like cancer, heart disease and even arthritis. Some research has found that GABA could help decrease inflammation and may be useful in the treatment of these conditions.

An animal study from UCLA, for instance, found that supplementing mice with GABA reduced the risk of developing rheumatoid arthritis and decreased symptoms for those that did. (14) Another review in the Journal of Neuroinflammation suggested that GABA could reduce the activity of a pathway that triggers joint inflammation. (15)

Filling your diet with anti-inflammatory foods can also help lower inflammation. Leafy green vegetables, berries, salmon and walnuts are all inflammation-busting foods that can be useful in addition to GABA.

Taking a GABA supplement, alone or in conjunction with traditional treatments, may help lessen symptoms of ADD and ADHD naturally. Following an ADHD diet and using other natural remedies for ADHD may also be effective in helping to reduce symptoms.

Human growth hormone is a hormone produced in the pituitary gland that comes with benefits like increased muscle strength, a lower risk of heart disease, improved body composition and stronger bones. A deficiency in this essential hormone can lead to symptoms like delayed puberty and slowed growth in children as well as depression, sexual dysfunction, insulin resistance and an increased risk of heart disease in adults.

High-intensity exercise along with other supplements, such as L-glutamine and L-arginine, can also help naturally increase levels of growth hormone.

Related: What Is Butyric Acid? 6 Benefits You Need to Know About

GABA is safe for most people and can be used with minimal side effects. However, some people may want to limit or avoid its use. If you are pregnant or breastfeeding, you should not take a GABA supplement as its effects have not been studied in these individuals. Additionally, if you’re already taking medications for depression, anxiety or insomnia, you may want to talk to your doctor before starting supplementation as it could interfere with or alter the activity of these medications.

Some people have also reported that high doses can actually increase anxiety or depressive episodes. Additionally, if you have any other negative symptoms like skin tingling or flushing, discontinue use and talk to your health care practitioner.

Doses can vary based on age, sex and weight. Before starting supplementation, it’s best to talk to your doctor and determine if it’s right for you as well as how much you should take.

The typical dosage for general stress relief is around 750–800 milligrams daily, divided up into three to four doses over the course of the day.

It’s best to start with a lower dose and work your way up to make sure you’re able to tolerate it well and find the dosage that works best for you. If you notice any negative side effects, decrease your dosage and consider consulting with your doctor if symptoms persist. 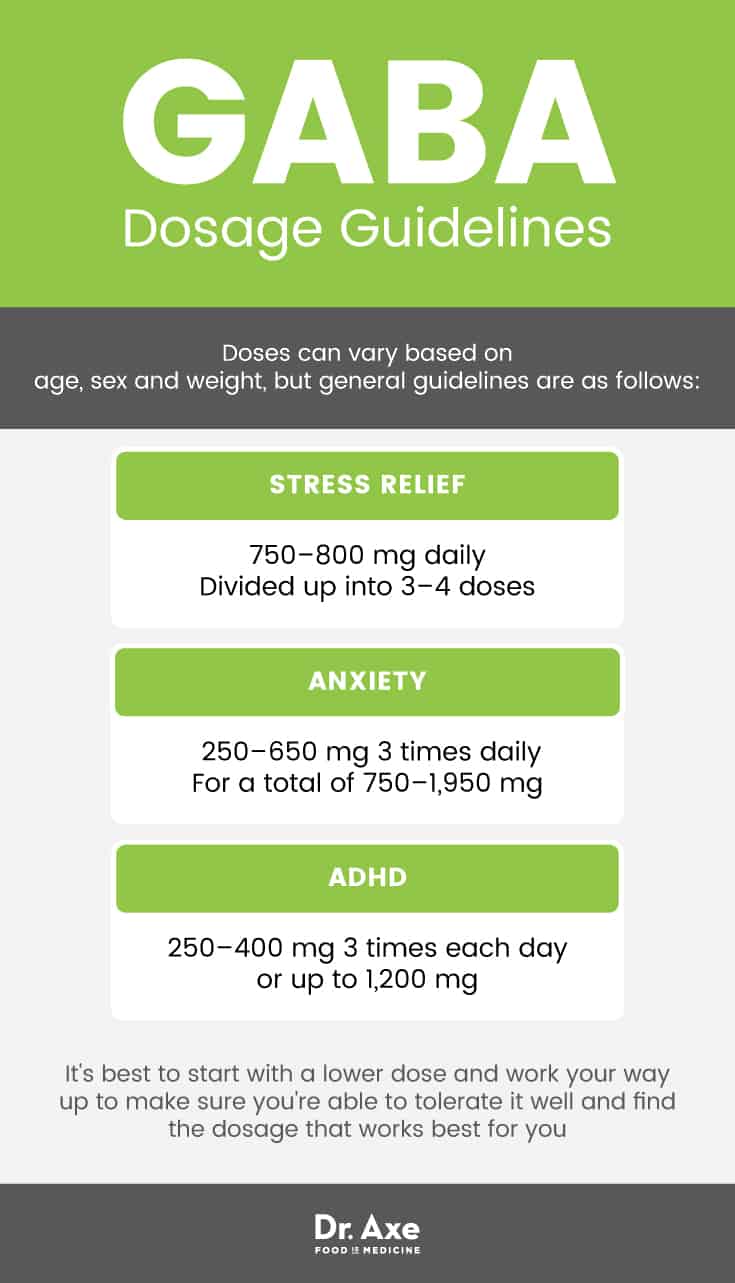 Pure GABA supplements are available at health shops, pharmacies and online. You can also find supplements that combine GABA with other anxiety-reducing compounds in most pharmacies as well.

Instead of taking a GABA supplement, you can also use other natural supplements for anxiety that can help effectively increase GABA activity in the brain.

Valerian root, for example, has been shown to increase the release of GABA from the brain nerve endings and then prevent it from being taken back into the nerve cells again. It is often used as a natural remedy for anxiety, insomnia and menstrual cramps. (19)

Magnesium is also important for the function of GABA. In fact, insomnia and anxiety are two common signs of magnesium deficiency. Getting enough magnesium into your diet through either food or supplementation can help increase levels and prevent these negative side effects.

Vitamin B6 also catalyzes production of GABA. Meeting your vitamin B6 needs through your diet could help ensure adequate levels of this neurotransmitter to prevent anxiety and insomnia. (20)

Although GABA was first synthesized in 1883, it was initially known only as a plant and microbe metabolic product.

In fact, its significance has only been recognized in recent years. It was first discovered in the tissues in 1910 and was found in the brain of mammals around 1950 when interest in its potential impact as a neurotransmitter began to peak.

It wasn’t until 1968 that they found definitive proof that it could be classified as a true neurotransmitter. In the following decades, GABA became the subject of a substantial amount of research trying to understand its role in the body. (21)

Today, we are just beginning to scrape the surface in uncovering the potential effects of this vital neurotransmitter and how it can affect many aspects of health, from improving sleep to regulating feelings like anxiety and fear. As research continues, we have started to learn more about just how important this neurotransmitter may be.

Read Next: How Yoga Changes Your Brain (It’s a Good Thing!)