Do you suffer from insomnia, or are you just sick and tired of not getting a decent night’s sleep? Did you know that there’s an herb that has been used to ease insomnia, anxiety and nervous restlessness since the second century A.D.? This natural and herbal sleep aid is called valerian root.

A systematic review and meta-analysis including 16 evidence-based studies indicates that valerian root is widely used and respected by the general population and physicians for its sedative effects and anti-anxiety capabilities.

You may have had valerian root before and not even realized it. It’s very common for valerian to be included in sleep-promoting tea blends and herbal supplements, but it doesn’t just offer a solid night’s sleep — it’s also helpful for naturally treating anxiety and can even lower blood pressure, among other benefits.

What Is Valerian Root?

Valerian root is derived from valerian (Valeriana officinalis), a perennial flowering plant from the Valerianaceae family. The plant has sweetly scented pink or white flowers that bloom in the summer.

Valerian (often misspelled “valarian”) is native to Europe and parts of Asia, and it now grows in North America as well. It has become a commonly used herb for better sleep quality in the United States, added to teas and dietary supplements.

The name of the herb is derived from the personal name “Valeria” and the Latin verb “valere” (to be strong, healthy).

Valerian has been used as a medicinal herb since at least the time of ancient Greece and Rome. Hippocrates described its properties, and Galen later prescribed it as a remedy for insomnia.

It was also used as an early epilepsy remedy up until around the 19th century. Researchers found that isovaleric acid, a chemical contained in valerian, may prevent convulsions, similar to the effects of the anticonvulsant medication valproic acid.

Studies show that valerian reduces the time it takes to fall asleep and improves sleep quality, so if you can’t sleep, it may be just what you’re looking for. Unlike many prescription sleep medications, valerian has fewer side effects and is a lot less likely to result in morning drowsiness.

In one double-blind study conducted by the Foellinge Health Center in Sweden, the effects of valerian on poor sleep were significant. Of the study participants, 44 percent reported perfect sleep while 89 percent reported improved sleep when taking valerian root. In addition, no adverse effects were observed for this group.

Valerian root is often combined with other sedating herbs, such as hops (Humulus lupulus) and lemon balm (Melissa officinalis), to treat sleep disorders. One study on children with minor sleep problems published in Phytomedicine found that 81 percent of those who took an herbal combination of valerian and lemon balm reported sleeping much better than those who took a placebo.

How does valerian root help you sleep so well? Valerian contains a chemical called linarin, which has been shown to have sedative effects.

Valerian extract can cause sedation by increasing your brain’s gamma-aminobutyric acid (GABA) level. GABA is an inhibitory neurotransmitter in the central nervous system. In large enough quantities it can cause a sedative effect, calming nervous activity.

Results from an in vitro study suggest that valerian extract may cause GABA to be released from brain nerve endings and then block GABA from being taken back into nerve cells. In addition, valerian’s valerenic acid inhibits an enzyme that destroys GABA, another way that valerian can improve your GABA levels and promote a great night’s rest.

Drugs such as alprazolam (Xanax) and diazepam (Valium) also work by increasing the amount of GABA in the brain. The valeric acid, valerenic acid and valerenol contained in valerian root extract act as anti-anxiety agents.

Now that you know that valerian root can be so calming to the mind and body, it’s probably not surprising to hear it can also help lower blood pressure, improving heart health. The same active components that contribute to the effects of valerian for anxiety management and restlessness can also help the body properly regulate its blood pressure.

High blood pressure is something you definitely want to avoid since it increases the chance of stroke and heart attack, and heart disease is a major health concern in the United States.

Studies indicate that valerian root supplements can help naturally reduce blood pressure and keep it at a healthy level, which has a direct positive impact on your heart health.

The relaxing nature of valerian root can make it a smart choice for natural relief of menstrual cramps. It can reduce the severity and discomfort of menstrual cramps, which is a common problem for women who suffer monthly from PMS.

How exactly can valerian root help? It’s a natural sedative and antispasmodic, which means it suppresses muscle spasms and acts as a natural muscle relaxer.

Valerian root dietary supplements can effectively calm the severe uterine muscle contractions that cause the terrible pain many women experience during menstruation, as a double-blind, randomized, placebo-controlled study from Islamic Azad University in Iran showed.

By reducing anxiety and improving the length and quality of sleep, valerian root can significantly help with daily stress management. Chronic stress, another major issue among adults in the United States, can impact many parts of your health, including sleep quality and immune system health.

By improving GABA levels, valerian makes it easier for both the mind and body to relax. It is an excellent natural way to help keep your cortisol levels down and improve your quality of life.

Further, valerian root has been shown to suppress both physical and psychological stress by helping maintain levels of serotonin, a neurotransmitter that helps regulate mood, according to research published in BMC Complementary and Alternative Medicine.

Melatonin is a hormone made in the pineal gland that’s highly correlated with the body’s sleep-wake cycle. When the sun goes down and darkness occurs, the pineal is “turned on” by the suprachiasmatic nucleus and begins to actively produce melatonin, which is released into the blood.

Usually, this occurs around 9 p.m. As a result, melatonin levels in the blood rise sharply, and you begin to feel less alert, making sleep more inviting.

Melatonin levels in the blood stay elevated for about 12 hours — all through the night — before the light of a new day when they fall back to low daytime levels by about 9 a.m. Daytime levels of melatonin are barely detectable, and low melatonin levels are linked to sleep disorders like insomnia.

Valerian is a sedative herb that has been used for centuries for the treatment of sleep disorders. Because valerian increases GABA levels in the brain, it helps reduce brain activity and allow users to fall asleep more easily, improving overall sleep quality. Valerian has been classified as generally recognized as safe in the United States. It can be purchased as a dietary supplement or herbal supplement in a variety of forms online or at your local health food store. It’s sold as a dry powdered extract in capsule form, a tea, tincture or fluid extract.

Valerian can also be used externally in essential oil form. (Valerian root’s smell is strong, but its taste is less off-putting.)

Valerian seems to be most effective after you take it regularly for two or more weeks. It may take a few weeks before the effects of valerian root herbal supplements are noticed.

For sleep disorders, it may be taken one to two hours before bedtime or up to three times in the course of the day, with the last dose near bedtime.

Once sleep improves, it’s recommended that you keep taking valerian for two to six weeks. For anxiety, try 120 to 200 milligrams, three to four times per day. 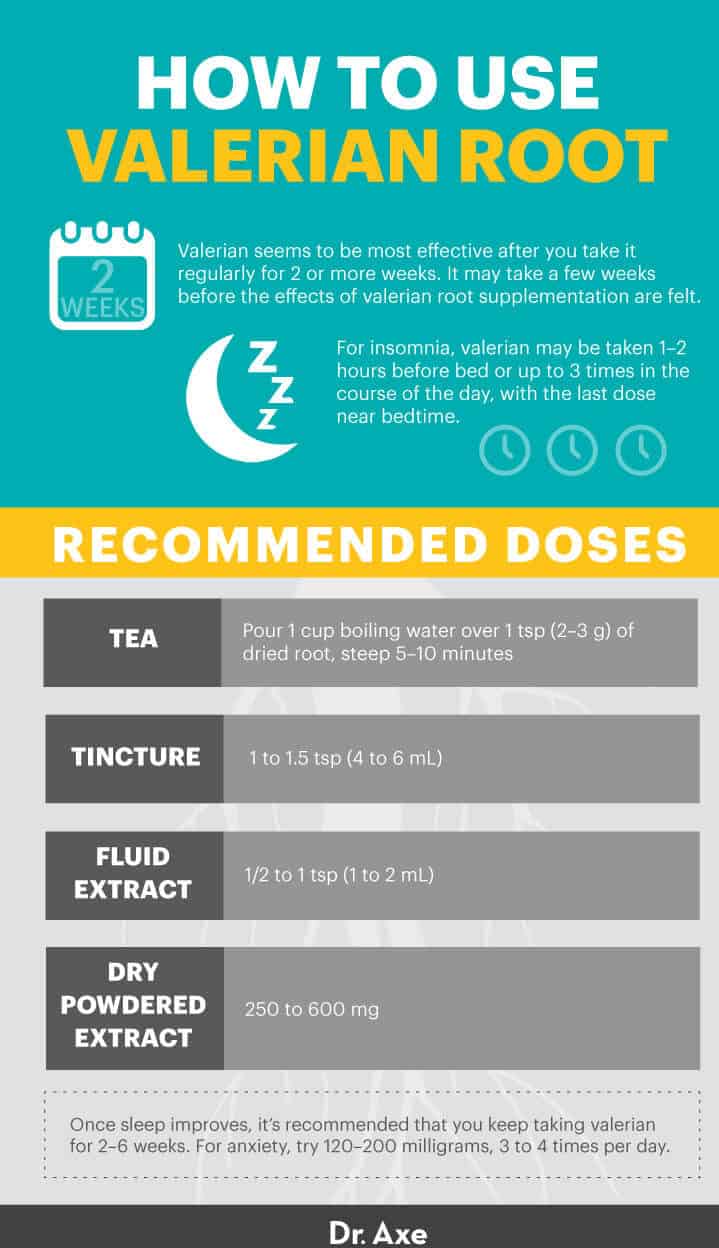 Although valerian root is generally regarded as safe, side effects such as headache, dizziness or stomach problems can occur. Sometimes people may have a reaction to valerian that’s the opposite of what they were aiming for — feeling anxious and restless instead of calm and sleepy.

For the majority of people, valerian root does not seem to cause any kind of dependency. It also does not cause withdrawal symptoms for most people.

However, there are a few reports of withdrawal symptoms when valerian has been used over very long periods of time. If you want to stop taking valerian after a lengthy amount of time, then you should lower your dose gradually rather than stopping all at once to be on the safe side.

Since it can make you sleepy, do not take valerian root supplements before driving, operating heavy machinery or doing any activities that require alertness. If you have liver disease, avoid taking valerian.

Valerian can also interfere with some prescription medications, and it may interact with or increase the effects of other natural supplements, like St. John’s wort, kava and melatonin.

Check with your doctor before taking valerian if you have any chronic health issues, and also to check to know if valerian will or won’t interact with any of your other current medications or supplements.

Bile Salts: How They Work + 9 Reasons You Need Them
1

What is the healthiest bread you can eat? That can depend upon ...
Read More
Dr. Axe on Facebook 266 Dr. Axe on Twitter 4 Dr. Axe on Instagram Dr. Axe on Google Plus Dr. Axe on Youtube Dr. Axe on Pintrest 218 Share on Email Print Article 488

Although most of us rarely eat offal — aka organ meat — ...
Read More
Dr. Axe on Facebook 6 Dr. Axe on Twitter 0 Dr. Axe on Instagram Dr. Axe on Google Plus Dr. Axe on Youtube Dr. Axe on Pintrest 0 Share on Email Print Article 6

The phrase “you are what you eat” is halfway accurate. The real ...
Read More
View All
Ad