Hawthorn is often called “the heart herb” for its various cardio-protective abilities. Prized for its ability to uplift and strengthen the heart both emotionally and physically, the hawthorn berry has been used for centuries as a natural remedy for all kinds of serious heart concerns. These include angina, high blood pressure, hardening of the arteries, irregular heart beat and even congestive heart failure.

In fact, hawthorn has been used to treat heart disease all the way back to the first century! Fast forward to the early 1800s and doctors in the United States were using this medicinal herb for respiratory and circulatory health disorders as well. (1)

Hawthorn fruit, leaves and flowers are all used medicinally today. Hawthorn fruit comes in the form of little red berries. Native American tribes enjoyed eating them and they also used hawthorn to treat heart troubles, as well as gastrointestinal complaints. (2)

What makes hawthorn berries so medicinal? It appears to be their numerous flavonoids for starters. Flavonoids are potent antioxidants known to effectively decrease inflammation while boosting immune function. Eating a diet high in flavonoid-rich foods, beverages and herbs  has been linked to prevention of cardiovascular and neurodegenerative diseases as well as cancer. (3)

Let’s look closer at exactly how a tiny little hawthorn berry can actually make huge improvements in many people’s health.

What Is Hawthorn Berry?

The hawthorn bush, also called thornapple or May-tree, is a deciduous plant. It is a member of the rose family (Rosaceae) belonging to the genus Crataegus. Hawthorn can come in the form of a thorny hawthorn bush or a hawthorn tree. Most of the time, you can find hawthorn growing along the sides of sunny wooded hills. There are various species of hawthorn, many of which are found in North America. (4)

These flavonoids include OPCs. What are OPCs? OPC stands for oligomeric proanthocyanidins. OPCs are some of the most prevalent polyphenolic substances found in plants. (6)

Here are just some of the many chemical compounds and nutrients found in hawthorn: (7) 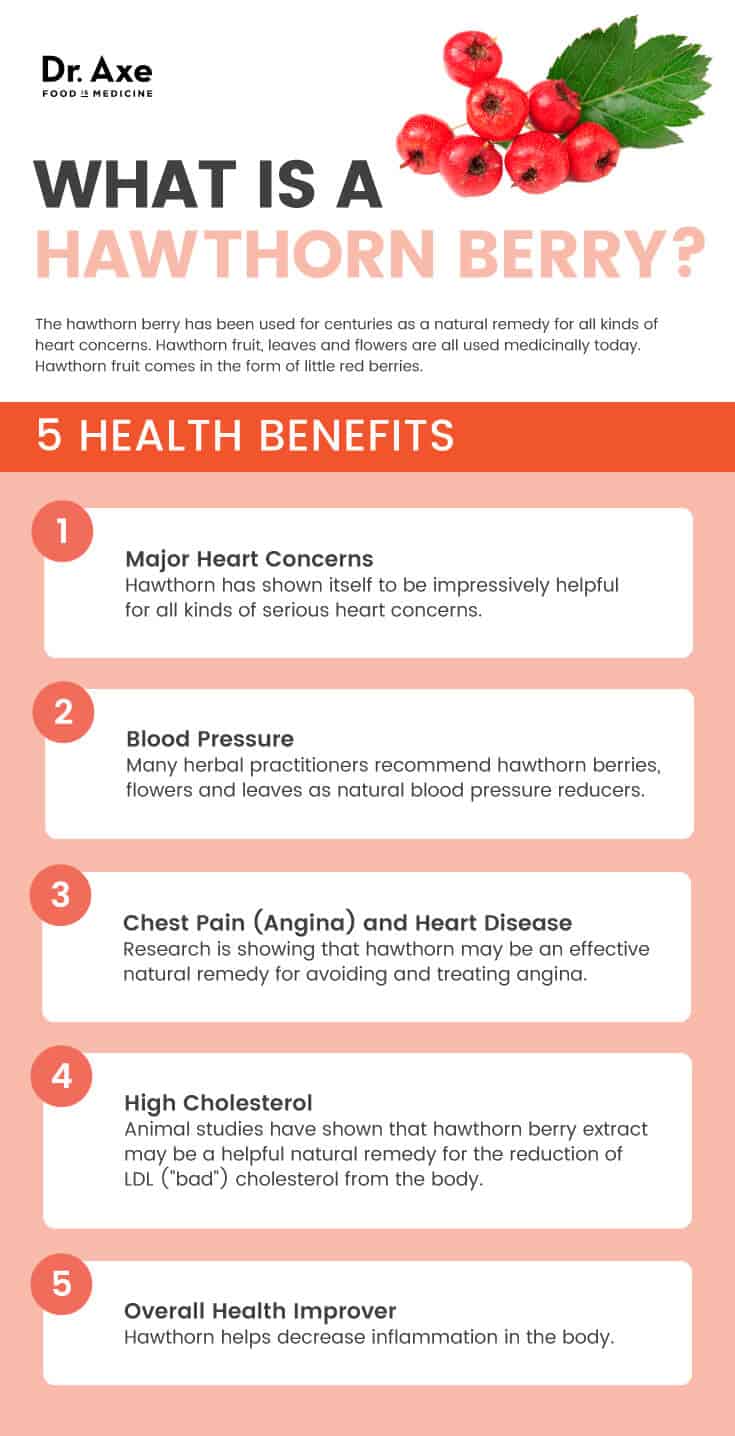 Hawthorn berry is best known for its helpful toning effects on the heart. As a “cardiotonic herb,” hawthorn has shown itself to be impressively helpful for all kinds of serious heart concerns. These include heart failure, heart disease, angina pectoris, changes in cardiac rhythm, and atherosclerosis. According to a 2016 study published in the journal Current Medicinal Chemistry, hawthorn’s powerful heart benefits come from its high polyphenolic content. (8)

To date, research has shown that hawthorn can even have a helpful effect on congestive heart failure (CHF). Multiple studies have shown that hawthorn supplementation has resulted in improved in cardiac function based on a number of parameters. These parameters include blood pressure, heart rate, cardiac output and exercise tolerance.

One trial in particular gave 78 patients with NYHA Class II heart failure a commercial preparation of hawthorn leaves and flowers. After two months, the patients receiving 200 milligrams of hawthorn three times per day had an increased working heart capacity, as well as a reduction in symptoms. The hawthorn group also showed a decrease in systolic blood pressure during physical activity. Another German study also showed that a hawthorn extract (LI132 Faros®) worked nearly as well as a prescription heart failure drug (captopril). And, the hawthorn extract had fewer side effects. (9)

Another cohort study of 952 patients with heart failure (NYHA II) had subjects take a hawthorn (Crataegus) special extract either alone or as an add-on to conventional treatment. After two years, fatigue, stress dyspnoea and palpitations (the three main symptoms of heart failure) were all significantly decreased in the group who took the hawthorn compared to the group who did not take hawthorn. (10)

Many herbal practitioners recommend hawthorn berries, flowers and leaves as natural blood pressure reducers. A scientific study published in The British Journal of General Practice had 79 type 2 diabetic patients either take 1200 milligrams of hawthorn extract daily or a placebo for a total of 16 weeks. Hypotensive drugs were also taken by 71 percent of the study participants.

Decreased blood flow to the heart causes chest pain known as angina. Sometimes it is confused with indigestion. But, true angina can be a symptom of coronary heart disease. So far, research is showing that hawthorn may be an effective natural remedy for avoiding and treating angina.

According to a scientific article published in the Journal of Herbal Medicine and Toxicology, hawthorn’s bioflavonoids help to dilate both peripheral and coronary blood vessels. This can improve blood flow to the heart, making hawthorn very useful for angina. Hawthorn’s proanthocyanidins are also believed to reduce tension of the blood vessel walls. Again, this is very helpful to discourage angina. (12)

In one study, 80 subjects (aged 45 to 65 years) with stable angina pectoris were randomly divided into four groups. The first group was the aerobic exercise group. The second group took a hawthorn extract. The third group did aerobic exercise, plus they took a hawthorn extract. Finally, the fourth group was the control group. After 12 weeks, the researchers found that the combination of aerobic exercise and hawthorn supplementation were “an effective complementary strategy to significantly lower the risk of atherosclerosis and heart problems.” (13)

Animal studies have shown that hawthorn berry extract may be a helpful natural remedy for the reduction of LDL (“bad”) cholesterol from the body. In China, hawthorn is called “Shan-Zha.” A study using animal subjects showed some really impressive health results from an ethanol extract of Zhongtian hawthorn, a cultivar of wild Shan-Zha, which has larger hawthorn fruit.

This 2016 study revealed that the hawthorn berry extract not only reduced overall high cholesterol levels, it also notably decreased LDL cholesterol, liver cholesterol and triglycerides as well as body weight. (14)

Scientific research conducted in 2008 revealed that hawthorn berry extract is excellent at decreasing inflammation. This is huge for health since we know that inflammation is at the root of most diseases.

The research also shows that the extract of hawthorn berry is a free radical scavenger. This is extremely beneficial to human health since free radicals can cause cellular damage (including DNA damage) by stealing electrons through a process called oxidation.

The 2008 animal study also demonstrated how hawthorn berry extract has protective effects for the gastrointestinal system and it appears to successfully kill off various types of unwanted bacteria. (15)

So far, safe hawthorn doses appear to be between 160 to 1,800 milligrams per day for a three to 24 week time period. Noticeable improvement in symptoms may take six to 12 weeks. (18)

You should not take hawthorn if you are pregnant or breast-feeding. Do not give hawthorn products to children. Supplementing with hawthorn is recommended for short-term use by adults. If any symptoms get worse when taking hawthorn, you should discontinue use and seek emergency medical care.

For some users, hawthorn can cause nausea, upset stomach, fatigue, sweating, headache, dizziness, palpitations, nosebleeds, insomnia, agitation and other side effects.

While hawthorn is known for being excellent for the heart, it can interact with prescription medications taken for heart disease. Medications for other heart concerns, high blood pressure and male sexual dysfunction are also known to interact with hawthorn. Some specific medications known to possibly interact with hawthorn include digoxin, beta-blockers, calcium channel blockers (CCBs), nitrates, phenylephrine and phosphodiesterase-5 inhibitors. If you have heart disease or any other health condition or are currently taking medication(s), check with your doctor before taking a hawthorn berry product or any other hawthorn supplement. (19, 20)

It is also important to note that heart failure is a very serious health condition. It’s best not to self-treat with hawthorn supplements if you suffer from this condition.