Pomegranate seeds, which are the edible insides of the pomegranate, are little ruby red bursts of sweet and tart deliciousness that pack a serious punch of health benefits.

Still need more reasons to give this incredible ingredient a try? Keep reading for everything you need to know about pomegranate seeds and why they deserve a spot on your next shopping list.

What Are Pomegranate Seeds?

Pomegranate seeds come from pomegranates (Punica granatum), which are the product of a fruit-bearing deciduous shrub or small tree. The name for the pomegranate fruit is derived from Latin and literally means “seeded apple.” Pomegranates are also sometimes called Chinese apples.

While the pomegranate is considered indigenous to Iran and its neighboring countries, cultivation of the pomegranate long ago encircled the Mediterranean and extended through the Arabian Peninsula, Afghanistan and India. Today, it’s commonly cultivated in the warmer parts North and South America.

Pomegranate seeds come from the pomegranate, which is a fruit about the size of a large orange with a smooth, thick skin that ranges in color from brownish yellow to deep red.

The inside of the pomegranate contains chambers of hundreds of arils, which are the seed pods inside the fruit that are separated by cream-colored membranes. These arils consist of juicy, brilliant-red fruit surrounding tiny, crisp, edible seeds. Interestingly enough, a single pomegranate can hold over 600 seeds.

These arils or seed pods are what we commonly refer to as “pomegranate seeds,” and they are typically either eaten raw or processed into pomegranate juice. The seeds are also used to make pomegranate seed oil, which has many positive health effects both internally and externally.

Like the vibrant red arils, pomegranate white seeds are also available and offer a much sweeter, less tart flavor.

You can also eat the creamy white pithy part surrounding the seeds, but it’s quite bitter. Although you can juice pomegranates very easily, be sure to avoid consuming the tough outer skin.

The juice of pomegranate seeds is the source of grenadine syrup, which is famous for its use in the classic nonalcoholic beverage known as a Shirley Temple. Grenadine is also used in many other flavorings and liqueurs.

Related: What Are Nigella Seeds? Top 5 Benefits + How to Use

Pomegranate seeds are a great source of several nutrients, including vitamin K, vitamin C, folate and potassium. Plus, they are also low in calories yet high in heart-healthy fiber.

A half-cup serving (about 87 grams) of pomegranate provides approximately the following nutrients:

In many cultures, pomegranates have been associated with fertility and abundance because of their many seeds. In recent years, the fruit has been studied for its libido-boosting effects as well.

A study by Queen Margaret University in Edinburgh found that consumption of pure pomegranate juice increased salivary testosterone levels in participants by an average of 24 percent, which can lead to heightened mood and increased sexual desire.

Concerns about erectile dysfunction? Pomegranate juice has also been shown to help increase blood flow and erectile response in animal models. Although more research is needed in humans, it may also offer a similar set of benefits for those affected by sexual dysfunction as well.

Arthritis is a common condition characterized by the inflammation of one or more joints, causing pain and stiffness that can worsen with age. Pomegranates are a great source of flavonols, which are a type of antioxidant that acts as anti-inflammatory agent in the body and may help relieve symptoms of arthritis.

In fact, animal models demonstrate that pomegranate seed extract may reduce the onset and incidence of collagen-induced arthritis. Studies conducted with animal subjects also show that the severity of arthritis and joint inflammation can be significantly reduced with consumption of pomegranate extract as well.

If you’re already on medication for arthritis, be sure to check with your doctor before adding pomegranate products to your daily routine.

When it comes to cancer, more and more research shows that pomegranate seeds may act as a potent cancer-fighting food.

Other in vitro studies have found that certain compounds in pomegranate juice show powerful antitumorigenic effects and are able to slow the growth of prostate cancer cells in the laboratory.

The juice of pomegranate seeds contains several different types of antioxidants and polyphenols that can promote heart health by lowering blood pressure levels. 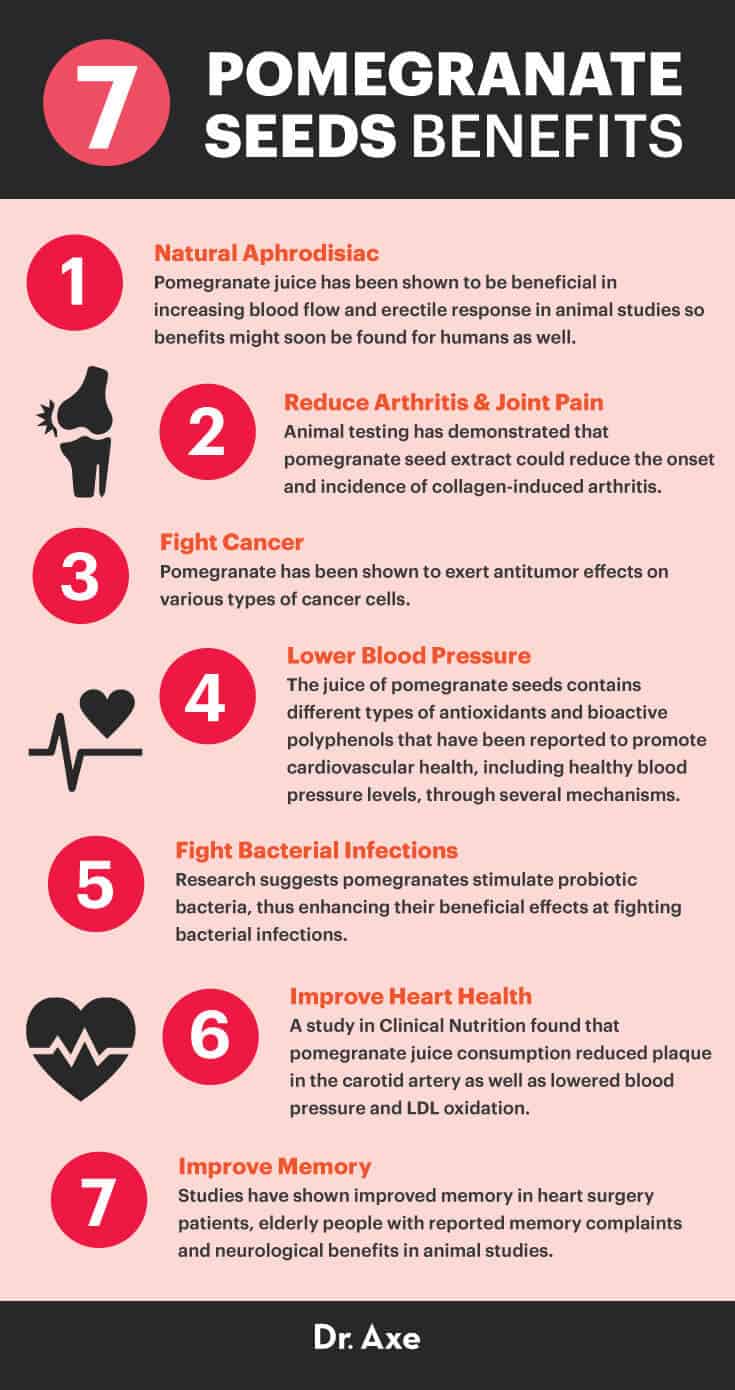 Not surprisingly, pomegranates have also been shown to stimulate the beneficial bacteria in the gut, which could enhance their ability to fight bacterial infections, according to research published in Evidence-Based Complementary and Alternative Medicine.

The juice made from pomegranate seeds contains antioxidants at higher levels than many other fruit juices, which could help block the buildup of cholesterol in the arteries for those at risk of heart disease.

Research published in Clinical Nutrition studied the effects of pomegranate juice in people with carotid artery stenosis. This  is a narrowing of either of the two key arteries located in the front of the neck through which blood from the heart goes to the brain.

After one year, the juice was effective at lowering blood pressure levels by over 12 percent and reducing atherosclerotic plaque by a whopping 30 percent. Conversely, those who did not drink the juice actually experienced a 9 percent increase in atherosclerotic plaque, suggesting that pomegranates could potentially offer protection against heart disease.

Studies have reported that polyphenols, which are found abundantly in pomegranate seeds and their juice, could significantly enhance cognitive function. In fact, one study published in Evidence-Based Complementary and Alternative Medicine found that pomegranate polyphenols could provide long-lasting protection from memory dysfunction caused by heart surgery.

Another study had elderly individuals with memory problems drink eight ounces of either pomegranate juice or a flavor-matched placebo drink for four weeks. Compared to the control group, those who drank pomegranate juice had significantly improved markers of verbal and visual memory.

In addition, an animal model conducted by the Department of Psychology at Loma Linda University noted that incorporating pomegranates into your diet could help slow the progression of Alzheimer’s disease, showcasing the fruit’s ability as a potential Alzheimer’s natural treatment.

When it comes to how to remove pomegranate seeds, it does take a bit of work. Some might describe the effort as tedious, but once you get the hang of how to do it, the payoff really is worth it.

Plus, a lot of companies have started offering pomegranate seeds solo in a ready-to-eat state so there are no excuses for not incorporating these little gems into your diet regularly!

If you want the freshest seeds possible, then definitely opt to obtain them from the fruit itself. Wondering where to buy fresh pomegranates? These tasty fruits can typically be found in your local grocery store between September and January.

When choosing a pomegranate, you want to make sure that you pick one that feels heavy and has a leathery skin that’s firm and taut with no soft spots.

To open a pomegranate, you need a knife, bowl and wooden spoon:

Alternatively, try freezing  them in a single layer on a tray and then storing in the freezer for up to six months in an airtight container. The seeds are often shriveled when thawed, but they still taste great in whatever you add them to!

Can you eat pomegranate seeds as is? These seeds are simply perfect and delicious all on their own, but if you’re looking to incorporate them into your next meal, there are lots of options.

Pomegranate seeds make a perfect addition to your next smoothie, pudding, salsa, salad or main course. They also work well paired with beets and goat cheese in this Beet and Pomegranate Salad Recipe.

Dried pomegranate seeds, also known as anardana, are also widely available and can be ground into a powder and sprinkled over your favorite dishes for an added dose of flavor and color.

There is no standard recommended dose for pomegranate. Eating the seeds and drinking the juice as part of a healthy diet are both considered safe, and there are minimal side effects from eating the fruit for most healthy adults.

However, if you show signs of a food allergy when eating pomegranate seeds, discontinue consumption immediately, and consult a doctor.

Pomegranate juice may cause dangerous side effects when it interacts with certain prescription medications, such as the blood thinner warfarin and angiotensin-converting enzyme inhibitors, including captopril, enalapril and lisinopril. Consult with a trusted health care practitioner before consuming products that use the fruit if you take any of these medications.

Many people also wonder: Can dogs eat pomegranate seeds? Although the fruit itself is not considered toxic to dogs, the seeds may cause stomach upset for some. Be sure to talk to your vet before sharing this flavorful fruit with your furry friends.