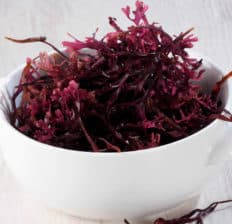 You may have heard about the sea moss “superfood” recently. It’s being touted by celebrities as an immune-boosting, skin-healing, digestive aid, but like most declared superfoods, sea moss has actually been consumed for centuries.

Although the research on sea moss is limited, there are reports of the seaweed possessing brain-protecting, immune-boosting and digestion-aiding properties. Plus, we know that seaweed is an excellent source of health-promoting nutrients.

So is sea moss all it’s cracked up to be? Let’s find out.

What Is Sea Moss?

Sea moss, also known as Irish moss, is a red seaweed with the scientific name Chondrus crispus. It’s been consumed by humans for thousands of years, found mainly on rocks along the North Atlantic Coast.

Today, it’s planted and processed in several coastal countries, including the U.S., China and Ireland, and used for its carrageenan content.

Carrageenan is also an active ingredient in some conventional medicine solutions.

In addition to its carrageenan and algal polysaccharide content, sea moss is also rich in:

The potential health benefits of this red algae are linked to its neuroprotective and immune-boosting constituents.

There are some potential benefits of sea moss, but the studies evaluating these effects have been done in labs or on animals. There certainly isn’t a clear understanding of how Irish moss may improve the health of humans, but the nutrient content in the seaweed is promising.

Irish moss works as a prebiotic, allowing it to influence the composition of our gut microbiota. It’s also a mucilaginous food that has a sticky texture and helps stool move through the gastrointestinal tract more easily.

Researchers suggest that, based on these findings, sea moss may help improve gut health and immune modulation. It was able to increase the population of beneficial bacteria and decrease harmful bacteria, including Streptococcus pneumoniae.

Studies suggests that red seaweed may have neuroprotective effects because of its ability to alleviate oxidative stress. For this reason, researchers indicate that C. crispus may be a promising ingredient in pharmaceutical applications for potential novel anti-neurodegenerative drugs for humans.

Research published in Applied and Environmental Microbiology indicates that red seaweed enhances host immunity and suppresses the expression of what’s called “virulence factors,” or molecules that are produced by bacteria, fungi and viruses.

This study was conducted in a lab, but researchers concluded that its results suggest that components of C. crispus may play a health-promoting role in animals and humans.

When combined with liquids, Irish moss has a gel-like texture that is thick and sticky. It acts as a soluble fiber that helps keep you full longer.

Adding Irish moss to meals may increase satiety and, therefore, possibly cut down on the amount of calories you consume. There isn’t scientific evidence to back this up, but the idea is that sea moss works similarly to chia seeds and aloe in this respect.

5. May Have Anti-Tumor Effects

There are some lab studies suggesting that Irish moss has anti-tumor effects that are due to its algal polysaccharide content. Researchers don’t have definitive answers about why this occurs in lab trials, but they indicate that it may be due to polysaccharide’s ability to enhance the body’s immunity and improve its antioxidant activity.

A study published in the Journal of Medicinal Food found that iodine in C. crispus is high and bioavailable. Both low and high iodine intake levels can increase the risk of disease, so it’s important to consume the right amount.

Sea moss is used in skin care products because of its antimicrobial and anti-inflammatory properties. It’s also rich in nutrients like omega-3 fatty acids, vitamin A and magnesium.

Using sea moss topically may help hydrate and soothe your skin, while fighting damage and infections. There isn’t any scientific research on the benefits of Irish moss for skin, but its vitamin and mineral content alone is promising for promoting healthy aging.

You can find sea moss in raw, dried or gel form. It’s also available as a powder or capsule, and it’s used as an ingredient in some skin care products.

You may have a hard time finding sea moss at your local grocery store, so purchasing it from a reputable company online is another option.

Irish moss is pretty much flavorless, so it can easily be added to smoothie, juice and soup recipes. Remember that it works as a thickener, so it also works well in sauces and even baked goods.

Like algae, you have the option to supplement with sea moss pills and sea moss powder. However, keep in mind that the science on humans is lacking, so check with your health care provider first. This is especially true if you have hypothyroidism.

When consumed in normal amounts, sea moss is generally safe and may have health benefits. Excessive consumption of Irish moss, however, can mean that you’re ingesting too much iodine.

Too much iodine can cause thyroid disorders, so you need to be careful not to take in too much of the nutrient. If you have Hashimoto’s, thyroiditis or other issues related to hypothyroidism, speak to your doctor about limiting iodine foods.