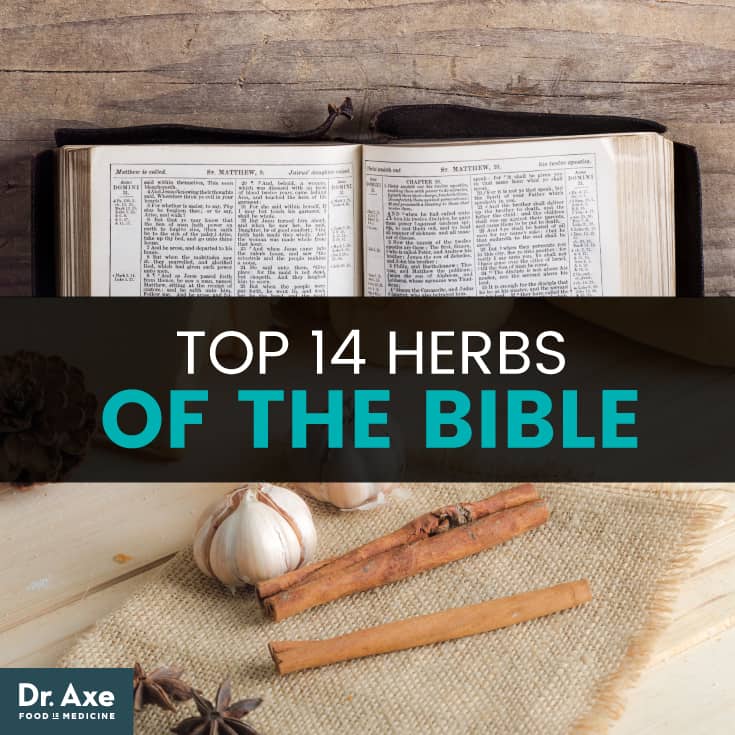 People have been using herbs for thousands of years for their culinary and medicinal benefits. I want to tell you about some of the most popular herbs of the Bible and what they were traditionally used for as well as how they are still used to this day.

As the Bible states in Psalms 104:14, God provides us with “herbs for the service of man.” Hopefully, after reading this article, you can start incorporating some of these health-boosting Biblical herbs into your life daily.

Herbs of the Bible

1. Aloes — He was accompanied by Nicodemus, the man who earlier had visited Jesus at night. Nicodemus brought a mixture of myrrh and aloes, about seventy-five pounds. (John 19:39)

The aloe vera plant has been used for thousands of years. In ancient times, it was used to embalm the dead, as well as for perfume.  It also has a lengthy history of use topically for skin complaints (including wounds, irritations and burns) and internally for constipation.

Today, aloe is still commonly used to treat burns (including sunburns), heal rashes and moisturize the skin.  Preliminary research has also shown that aloe may help to lower blood sugar in type 2 diabetics and decrease the effects of liver damage caused by alcohol. (1)

2. Anise — Woe unto you, scribes and Pharisees, hypocrites! for ye pay tithe of mint and anise and cummin, and have omitted the weightier matters of the law, judgment, mercy, and faith: these ought ye to have done, and not to leave the other undone. (Matthew 23:23)

All parts of the anise plant were used during Biblical times. The seeds, leaves and stem were used to cool high temperatures, as well as for other medicinal purposes.

Today, anise can be used to help with digestion and can be used as an anti-flatulence agent. It’s also used with some success for breast-feeding support and parasites. As an antispasmodic, anise can be helpful for coughs, bronchitis and COPD. (2)

Anise is commonly taken by crushing the seeds into a tea.

3. Balm or Balsam — And they sat down to eat bread: and they lifted up their eyes and looked, and, behold, a company of Ishmeelites came from Gilead with their camels bearing spicery and balm and myrrh, going to carry it down to Egypt. (Genesis 37:25)

Balm or balsam in the Bible refers to an extremely fragrant resinous substance extracted from a plant. In Biblical times, balsam was considered extremely valuable. The balm or balsam of Gilead in the Bible was named for the region of Gilead where it was made and this balm was used medicinally.

4. Bitter herbs — They shall eat the flesh that same night, roasted with fire, and they shall eat it with unleavened bread and bitter herbs. (Exodus 12:8)

Bitter herbs are a collective term used for things like horehound, tansy, horseradish, endive, parsley and coriander seeds. Bitter herbs were mostly used for food in the Bible. In fact, the people of Israel were commanded to have bitter herbs with their Passover lamb.

Today, bitter herbs like gentian and wormwood are known for helping to prevent and relieve digestive complaints like dyspepsia. Experts theorize that bitter herbs are able to aid digestion through their ability to increase digestive secretions as well as blood circulation in the abdominal organs. (3)

5. Cassia — Vedan and Javan paid for your wares from Uzal; wrought iron, cassia and sweet cane were among your merchandise. (Ezekiel 27:19)

Cassia oil was popularly used as anointing oil during Biblical times. Cassia has aromatic properties quite similar to cinnamon.

Today, cassia is used in natural hair care, coloring and conditioning. The leaves are actually harvested, dried and ground into a powder used for the hair.

Cinnamon, once considered more precious than gold, has some amazing medicinal benefits. The bark, where the oil comes from, was traditionally collected for anointing oil, as well as perfume.

Today, cinnamon is used to help lower blood glucose levels. Due to its antifungal properties, it’s also employed in the natural treatment of yeast infections. It can also help to calm an upset stomach by relieving gas. (4)

7. Cumin — When he has leveled the surface, does he not sow caraway and scatter cumin? Does he not plant wheat in its place, barley in its plot, and spelt in its field? (Isaiah 28:25)

The ancient Israelites took cumin seeds, dried them and used them to flavor their food.

Today, research has shown that cumin seeds contain a substance called cuminaldehyde that may be useful in fighting diabetes. (5) A study published in  2017 demonstrates that black cumin contains an anticancer phytochemical known as thymoquinone and thymoquinone may be considered as a future drug in cancer treatment. (6)

8. Frankincense — On coming to the house, they saw the child with his mother Mary, and they bowed down and worshiped him. Then they opened their treasures and presented him with gifts of gold, frankincense and myrrh. (Matthew 2:11)

Most popularly known for incense, frankincense was used during ceremonial offerings and considered an article of luxury.

Today, it can be used as an anti-inflammatory agent, analgesic, antidepressant, and sedative, in addition to being a powerful healing herb. Frankincense oil is also a great stress-reducer known to improve anxiety. (7)

9. Garlic — We remember the free fish we ate in Egypt, along with the cucumbers, melons, leeks, onions, and garlic. (Numbers 11:5)

Garlic has been used as both food and medicine in many cultures for thousands of years, dating back to when the Egyptian pyramids were built.

Today, garlic is used to boost the immune system and help prevent heart disease. It also is known to have helpful effects on hypertension and high cholesterol. Consuming garlic on a regular basis may help guard against cancer formation in the body. (8)

I highly recommend checking out my article 7 Raw Garlic Benefits for Reversing Disease if you want to know even more about the health benefits of this incredible medicinal herb.

Hyssop is a sweet smelling plant from the mint family. It was used in many ceremonial rituals of the Israelites, as burning hyssop typically meant an inner cleansing.

A research study published in 2003 demonstrates how hyssop may be “a useful food for hyperglycemia,” which is an abnormally high blood sugar level. (9) Hyssop is also known for being an expectorant and improving respiratory related problems such as asthma, coughs and bronchitis. (10)

Hyssop can be found in tea and tincture form at most health stores. Warm hyssop tea or hyssop tintcure diluted in warm water can be used as a gargling liquid for sore throats.

11. Mint — Woe unto you, scribes and Pharisees, hypocrites! for ye pay tithe of mint and anise and cummin, and have omitted the weightier matters of the law, judgment, mercy, and faith: these ought ye to have done, and not to leave the other undone. (Matthew 23:23)

Mint has been used for thousands of years as a culinary herb and for medicinal purposes.

12. Mustard  — And the Lord said, “If you had faith like a grain of mustard seed, you could say to this mulberry tree, ‘Be uprooted and planted in the sea,’ and it would obey you.” (Luke 17:6)

One of Jesus’ most famous parables was about the mustard seed. This may be because mustard grew so abundantly in Palestine.

13. Myrrh — Then their father Israel said to them, “If it must be so, then do this: take some of the best products of the land in your bags, and carry down to the man as a present, a little balm and a little honey, aromatic gum and myrrh, pistachio nuts and almonds.” (Genesis 43:11)

Myrrh is mentioned over and over in the Bible. (13) In Biblical times, it was sold as a spice and as an ingredient of the anointing oil used in the Tabernacle, or as a salve for the purification of the dead. In the Roman world, it was considered a natural remedy for almost every human affliction from earaches to hemorrhoids.

Today, myrrh oil is used for its anti-parasitic, antifungal and antibacterial benefits. (14) Many people enjoying diffusing this Biblical oil into the air during prayer and meditation.

14. Saffron — Nard and saffron, calamus and cinnamon, with all the trees of frankincense, myrrh and aloes, along with all the finest spices. (Song of Solomon 4:14)

The most expensive spice in the world today was also very dear during ancient times. Because of its distinct yellow color, saffron was used not only for flavoring but to make ancient dyes as well. Ancient peoples used saffron to treat stomach upsets, bubonic plague and smallpox.

As you can see, the Bible makes mention of so many valuable herbs. These are plants that can be used as food, medicine, tea, skin care, hair care, dental care and so much more. It really is incredible when you think about all the natural Bible herbs we can easily access and benefit from on an everyday basis. I hope you may find a way to incorporate these amazing Biblical herbs into your daily routine.

It’s not often that the government of a country joins forces with ...
Read More
View All
Ad