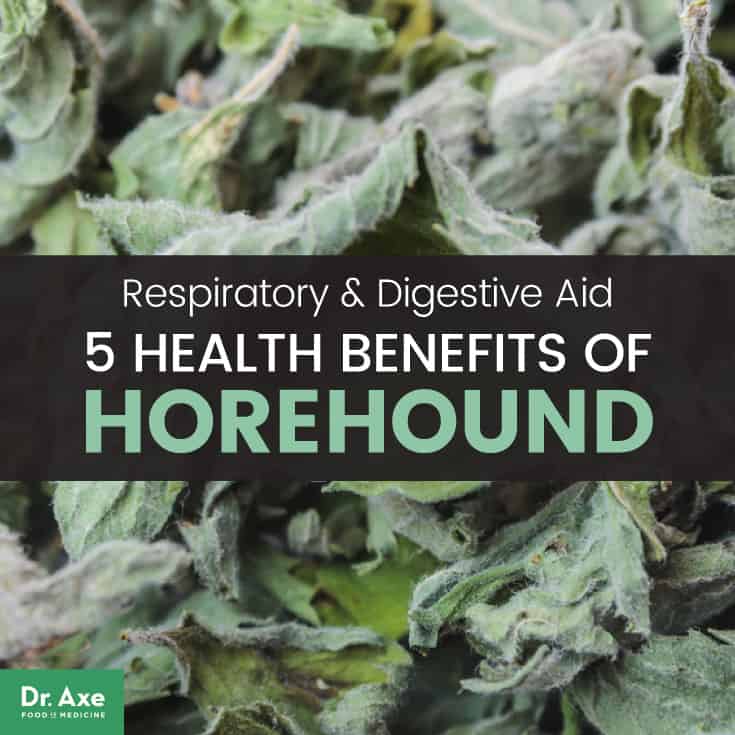 For centuries, people all over the world have used horehound (Marrubium vulgare) to naturally treat respiratory conditions. In recent times, some of the top makers of herbal cough drops and cough syrup include horehound in their formulations, which is no surprise since it is said to be one of the oldest known cough remedies! This is just one of many impressive horehound benefits.

In vitro studies have also demonstrated that M. vulgare essential oil appears to have antibacterial, antifungal and anti-cancer properties. (1) Read on to learn all about how this bitter herb has been used for years and continues to be used for all kinds of common health problems.

So you know it’s a plant, but are you looking for a more specific horehound definition? Horehound — commonly known as white horehound — is a bitter perennial bushy plant belonging to the mint family. Other names for this herb include houndsbane, marrubium, eye of the star, seed of Horus, marvel, and bulls’ blood.

Horehound is a perennial plant. This means once it is planted it will return year after year. The horehound plant (M. vulgare) is native to Europe, northern Africa, and southwestern and central Asia. It has small white flowers. The flowers as well as all of the plant’s parts are used for medicinal purposes.

Black horehound (Ballota nigra) is the smellier relative of white horehound. Like white horehound, it belongs to the mint family and has some similar medicinal uses.

So what exactly makes horehound a medicinal herb? It has been found to contain a number of health-boosting plant components including vitamin C, essential oils, flavonoids, alkaloids, bitter lactone, saponin, sterols, tannins, monoterpenes and diterpenes. (2) The specific flavonoids that can be found in the plant include apigerin, apigerin 7-glycoside, luteolin, luteolin 7-glycoside, quercetin 3-glycoside, and quercetin 3-rhamnoglycoside. (3)

Horehound is an ingredient often found in herbal lozenges and syrups used for the natural treatment of coughs. There’s a good reason why this herb is employed in these natural cough remedies. As I mentioned, it contains naturally occurring plant compounds called diterpenes. More specifically, its major active chemical compound is a diterpene called marrubiin. We can likely thank marrubiin for horehound’s expectorant ability. In other words, horehound can help cough sufferers to get rid of that nasty mucus that is clogging up their airways. (4)

Research has also shown that horehound has both antispasmodic and analgesic (pain-relieving) effects. These are two more good reasons why it is a great natural cough reliever. (5)

Researchers also believe that marrubiin is the reason that horehound has a bitter taste. Along with foods like endive and horseradish,  horehound is believed to be one of the Bible’s bitter herbs. (6) It’s bitter flavor makes it an excellent choice for improving digestion since plants that taste bitter have been shown to help in managing dyspepsia also known as indigestion or upset stomach. (7)

Why are bitter foods helpful to healthy digestion? The taste of bitter herbs actually helps to increase the production of saliva and gastric juices. This is exactly what you want when you’re eating because these crucial bodily fluids help to break down the food you eat. Experts like Kirsten Shanks, a nutritionist, naturopath and herbalist, also say that,  “Over time we have developed a ‘bitter reflex’ which upon recognizing the taste on the tongue begins to stimulate and tonify organs of digestion including the stomach, liver, gallbladder and pancreas.” (8)

Bitter foods like horehound are a great choice if you struggle with poor digestion. When your food is broken down in optimal fashion, you’re much less likely to suffer from digestive complaints like indigestion and gas.

For some people, symptoms of motion sickness can result from the movement of travel by car, boat or plane. Motion sickness will typically go away when the motion stops. But many people who commonly deal with motion sickness are curious about natural ways to improve their queasy feelings.

Unfortunately, there hasn’t been any scientific research to date, but black horehound has been used as a traditional remedy for motion sickness. The recommended dosage is one to two milliliters as a tincture. Or use one to two teaspoons of leaves steeped as a tea, taken three times per day. (9)

As an expectorant herb, M. vulgare can be a really helpful remedy when it comes to the intense congestion of bronchitis. When you have bronchitis, the tubes that carry air to your lungs (bronchial tubes) are inflamed. This inflammation causes a cough, which can often be intense and persistent.

Horehound can be helpful since it has been found to not only act as an expectorant (helping to get mucus up), but also to promote vasodilatory effects. (10) Vasodilation is when the smooth muscle within the blood vessels relax and the blood vessels widen. This results in a better flow of oxygenated blood.

Sometimes people struggle with a lack of appetite for various reasons including stress, pregnancy, hypothyroidism, metabolic problems, liver disease and more. (11) Bitter herbs like M. vulgare have a long history of use as a digestive tonic as well as an appetite stimulant. Horehound’s ability to improve saliva and gastric juice output makes it very helpful for increasing the appetite.

Horehound’s medicinal use is believed to go all the way back to the 1st century B.C. This is when the Roman  encyclopaedist Aulus Cornelius Celsus mentions horehound as a natural remedy for respiratory problems in his medical treatise titled De Medicina. (12)

The leaves of the M. vulgare plant are crinkled and have soft fine hairs. This herb can grow in a lot of different climates. But some say that the the best quality is grown in the intense desert heat.

Horehound is one of the bitter herbs sometimes included in Passover meals. It has been used in beverages as well. For example, horehound beer or ale is an herbal, alcohol-free, soft drink.  Historically, it was also used to make candies. You can actually still find horehound candies being sold to this day!

How to Use Horehound

Horehound is available at most health stores or online in several possible forms including fresh, dried, powdered, capsule, extract, tincture or pressed juice. You can use fresh or dried versions to make homemade cough drops, syrups and teas. It is also sometimes used as a flavoring.

If you have fresh or dried leaves, then you can make horehound tea. Simply pour boiling water over a teaspoon or two of the leaves. Let it steep for at least five minutes before removing the leaves and make sure not to drink it too hot. To make the taste more pleasant, and also to help fight a cough, add some raw honey and a squeeze of lemon juice.

If time isn’t on your side, you can also follow horehound tincture directions and add a few drops to a small amount of water a few times per day.

Dosages of M. vulgare depend on each individual person and his or her health concerns. There is not currently any standard range of doses established. For digestive problems, horehound has been taken at a dose of 4.5 grams of the crude herb or two to four tablespoons of the pressed juice daily. (13) If you’re feeling unsure about what dosage to take for a particular health concern, it’s always a good idea to consult with a certified herbalist for guidance.

Possible Side Effects and Interactions

Horehound should be used with caution by anyone with a peptic ulcer or gastritis since horehound is known for increasing stomach acid. (14) Black horehound is not recommended for people with Parkinson’s disease or schizophrenia. (15)

White horehound is considered safe for most people when taken in food amounts and is possibly safe when taken for medicinal purposes. It is not recommended to ever take this herb in large quantities because this can cause vomiting. Plus using it topically has been known to cause contact dermatitis for some.

M. vulgare is not recommended for pregnant or nursing women. But food amounts of white horehound while nursing are likely OK. Check with your doctor before using horehound medicinally if you are currently taking medication or have any ongoing health conditions, especially a heart condition, diabetes or low blood pressure. Before any surgery, it’s recommended to stop taking M. vulgare at a minimum of two weeks prior to surgery day. (16)

Horehound is a bitter herb that belongs to the mint family. It may not be as well known as some other herbal remedies, but people have been aware of its benefits for centuries. Traditional medicine has used horehound as a remedy for common respiratory concerns like coughs and digestive complaints like indigestion. As with other plants, horehound’s positive effects on health are a result of its natural plant compounds. You may think you’ve never had horehound before. But if you’ve used a natural cough syrup or cough drop, you may have already benefited from this bitter herb’s positive effects!

Read Next: Marshmallow Root: The Ultimate Gut and Lung Protector

While the name may make you smile and laugh with thoughts of ...
Read More
Dr. Axe on Facebook 22 Dr. Axe on Twitter 0 Dr. Axe on Instagram Dr. Axe on Google Plus Dr. Axe on Youtube Dr. Axe on Pintrest 0 Share on Email Print Article 22