Just about everyone at one point or another has sat around a fire and roasted a marshmallow, whether to make a s’more or to simply eat the sticky treat. It’s typically thought of as an empty-calorie snack, but did you know that marshmallow root — from which marshmallows are made — is actually full of health benefits?

It’s true. In fact, marshmallow root has been used for centuries to treat infections, improve digestion and so much more.

How can this be? Contrary to what the name might conjure, marshmallow root is not the same as the airy, sugary puffed treat we’re all accustomed to. It’s actually the root of the marshmallow plant and filled with healing properties, like the ones listed below.

What Is Marshmallow Root?

What exactly is marshmallow root? It’s a plant native to Africa and parts of Europe that’s used to make an herbal treatment that’s been utilized for centuries.

Marshmallow root (Althaea officinalis) has a very long history in folk medicine that goes back to ancient Greek and Egyptian times. Over 2,800 years ago, references to this plant were made in Homer’s “Iliad,” since at the time this “slippery” herb was a popular way to treat coughs, sore throats and congestion.

One of the reasons marshmallow candies got their name is because of the “fluffy” qualities of marshmallow root. Fibrous extracts from Althaea officinalis swell up in the body and form a soft, gel-like substance.

Today, this plant is still used by holistic practitioners in many of the same ways it was thousands of years ago, since within the plant lay powerful active ingredients that help break up mucus, reduce inflammation and kill bacteria naturally. It’s also become an important herb in the Ayurvedic medicine and Unani healing practices, which utilize many different plants to boost immunity and prevent disease.

Related: Meadowsweet Herb: 5 Potential Benefits & How to Use It

What is marshmallow root good for? Around the world, Althaea officinalis is used to treat illnesses and disorders, including:

Here’s more about some of the top marshmallow root benefits:

For anyone suffering from a sore throat, cough or cold, marshmallow root can be taken orally to reduce pain, swelling and congestion.

According to a 2020 in vitro study published in Frontiers in Pharmacology, its antitussive properties and mucilage abilities allow it to decrease inflammation and irritation of the throat, reduce swelling in the lymph nodes, speed up healing time and reduce aggravating dry coughing. It also tends to have immediate effects due to forming a protective film on the inflamed mucosa.

This is exactly the reason that marshmallow extract is added to many cough syrups and throat lozenges. It’s one of the most effective natural cough remedies.

It also seems to help stop the urge to cough and facilitates the process of producing more saliva, allowing it help reduce symptoms of dry mouth in research involving cats. It can safely be used by people with chronically low levels of salivary flow and chronic coughs.

Studies also suggest it can help treat tonsillitis, including among children.

Marshmallow is especially effective at beating a cold or the flu when combined with other anti-inflammatory and antibacterial herbs and essential oils for sore throat, such as slippery elm and echinacea or lemon, myrrh, oregano, cypress and frankincense essential oils.

When combined, these target the underlying cause of the sickness (including bacteria) and coat the throat to ease discomfort.

If you feel symptoms of tonsillitis, bronchitis, a urinary tract infection or respiratory infection coming on, taking marshmallow root at the first sign of discomfort like swelling, burning and tenderness may help ease symptoms. It can help speed up the healing process and naturally kill bacteria that can cause various ailments.

Once ingested, it helps increase the secretion of urine, which improves the body’s ability to draw bacteria out of the urinary tract. This is the reason it’s also recommended for treating kidney stone symptoms.

Research suggests that marshmallow is an effective way to help treat certain digestive disorders, including leaky gut syndrome, which develops when particles leak outside tiny openings in the gut lining, allowing them to enter the bloodstream where they can trigger autoimmune reactions.

Marshmallow helps restore integrity of the gut lining by forming a protective layer around small junctions, as shown in research on rats. In addition, it seems to be beneficial for other forms of inflammatory bowel diseases, including ulcerative colitis and Crohn’s disease.

Animal research shows it coats the inside of the stomach and prevents acid from causing discomfort and “burning,” while also providing anti-inflammatory effects.

Interestingly, the mucilage properties of marshmallow seem to remain stable in the body all the way through the digestive system until they reach the colon. This means they don’t change form while passing through the digestive tract and therefore are useful for soothing symptoms of inflammatory digestive disorders.

For most forms of indigestion, marshmallow root tea tends to work the best and is usually soothing to the stomach while not causing any side effects. For even more stomach-soothing effects, you can mix marshmallow with other digestive aids, such as peppermint essential oil or steeped/raw ginger root.

By helping soothe the nerve-sense system of the skin, marshmallow has anti-irritant properties and is even well-tolerated by those with allergies and hypersensitive skin. For many years, it’s provided relief from itching, swelling, redness and chaffing.

According to a 2019 report, marshmallow can be used topically to treat a number of skin problems:

The roots and stem of the marshmallow plant secrete mucilage, which softens skin, lowers swelling and kills bacteria.

Some in vitro evidence shows its anti-inflammatory effects are also beneficial for treating eczema and dermatitis. Polysaccharides in marshmallow roots are absorbent fibers that combine with liquid to form a soft and slippery base that acts like a skin buffer, moisturizer and protective layer for ultra-sensitive skin.

You’ll find marshmallow in many lip balms, hair conditioners, salves and after-sun products. If you can’t find a natural ointment made with marshmallow extracts, try creating your own homemade moisturizer for dry skin by adding several drops to a coconut or jojoba oil-based cream. Used along with natural skin-savers like tea tree oil and aloe vera, marshmallow has an even bigger impact.

A 2011 study examined the effects of marshmallow root supplementation on blood lipid profiles and liver function over a one-month period. Researchers found that marshmallow had anti-inflammatory effects that worked against both acute and chronic inflammation.

Marshmallow also showed anti-ulcer activity, anti-lipidemic abilities and resulted in an increase in HDL cholesterol (the “good” kind). When given a dosage of 50 milligrams marshmallow per kilogram of body weight, the subjects experienced significant increases in serum HDL cholesterol level with no side effects and adverse effects on liver enzymes.

Marshmallow seems to have diuretic effects and acts similar to “water pills” that are intended to lower fluid retention, edema and bloating. If your diet or hormone levels (such as experiencing PMS or menopause) cause you to retain water and feel uncomfortable, marshmallow can help increase urination and balance fluids.

Researchers have recently learned that that antioxidants such as flavonoids found within marshmallow allow it to help prevent the formation of oxidative damage that leads to chronic diseases, including cancerous tumor growth and inflammatory disorders, as well as neurodegenerative diseases.

It protects healthy cells through a combination of mechanisms, including forming cell adhesions, affecting growth of cells and the extracellular matrix, managing cytokine release, and destroying harmful cells (apoptosis). Marshmallow also speeds up healing by activating the immune system, specifically by facilitating a process called phagocytosis, which removes damaged or dead cells from the body.

Recently, studies have also shown that it has potential neuroprotective effects that may defend against formation of Parkinson’s due to its antioxidant properties. 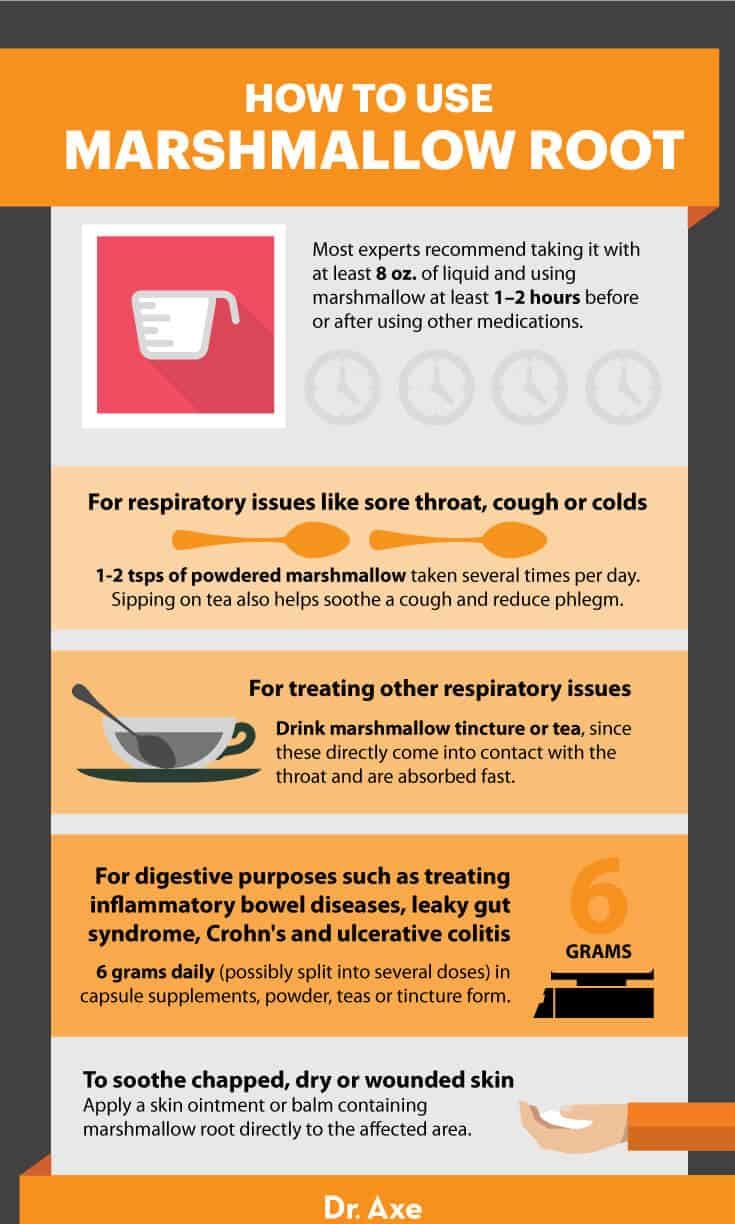 What are the side effects of marshmallow root? Because it’s been used for so long safely and is considered a “time-honored approach to strengthening the body,” products made from Althaea officinalis typically lead to few side effects.

It’s generally recognized as safe, and few if any reported side effects have occurred — although to be fair it hasn’t actually be studied in many clinical human trials (more using animals).

While it’s normally well-tolerated and easy to digest, it’s possible to experience certain side effects from taking marshmallow root, especially if you take other medications. Talk with your doctor about any possible interactions before taking marshmallow if you are pregnant, nursing, or have been diagnosed with an existing condition like inflammatory bowel disease, diabetes or high cholesterol.

Possible interactions of marshmallow root include affecting the way other medications are absorbed or excreted from the body. Marshmallow coats the lining of the stomach and can interfere with the absorption of other drugs.

It’s also possible that it can interfere with normal blood sugar control, so if you’re diabetic, prediabetic or taking insulin, you want to see a professional first to make sure you closely monitor blood sugar and avoid dangerous dips. Because of its effects on fluid retention, blood platelet formation and blood sugar levels, you should also stop taking marshmallow at least two weeks before a scheduled surgery.

Supplements, teas or tinctures that contain marshmallow root extract are made by isolating special compounds found in Althaea officinalis leaves and roots. The flowers and young leaves of the marshmallow plant are also edible and traditionally have been eaten raw, boiled and fried for their many benefits.

The biggest benefit that marshmallow leaf and root have to offer is that they’re a natural “mucilage,” which means marshmallow acts like a type of soft fiber and swells up when combined with water. This “slippery” quality forms a protective, thick coating around membranes.

Marshmallow root and leaf feature many active compounds that make it an effective mucilage and medicinal supplement, including:

A study published in the Journal of Ethnopharmacology found that these compounds help reduce symptoms like pain and swelling within the nasal passages, the mucous membranes that line the respiratory tract and the lining of the digestive system. Marshmallow has been shown to have stimulating effects on cell viability and proliferation of epithelial cells, which allows it to form a bioadhesive layer on the cell surface of skin and within the digestive system.

Because it has a soothing effect on swollen tissues, antibacterial properties and helps guard mucous membranes throughout the body, marshmallow is capable of helping resolve infections of the throat and skin, while strengthening the gut lining and preventing permeability (called leaky gut syndrome).

You can find marshmallow root in many different forms, including:

The exact kind you want to use and the dosage that works best depend on what condition you’re treating. Always check dosage recommendations on the specific product you’re using, since they can vary.

Look for commonly sold marshmallow powder or teas in health food stores or online. Marshmallow is also added to some digestive herbal tea blends or those intended to soothe a sore throat.

Syrup containing this herb is another option for treating coughs and respiratory issues.

No matter which way you decide to use it, make sure to drink it with enough water since this helps it form a thick, sticky substance. Most experts recommend taking it with at least eight ounces of liquid and using marshmallow at least one to two hours before or after using other medications.

Here are several ways to effectively use marshmallow root in its different forms: